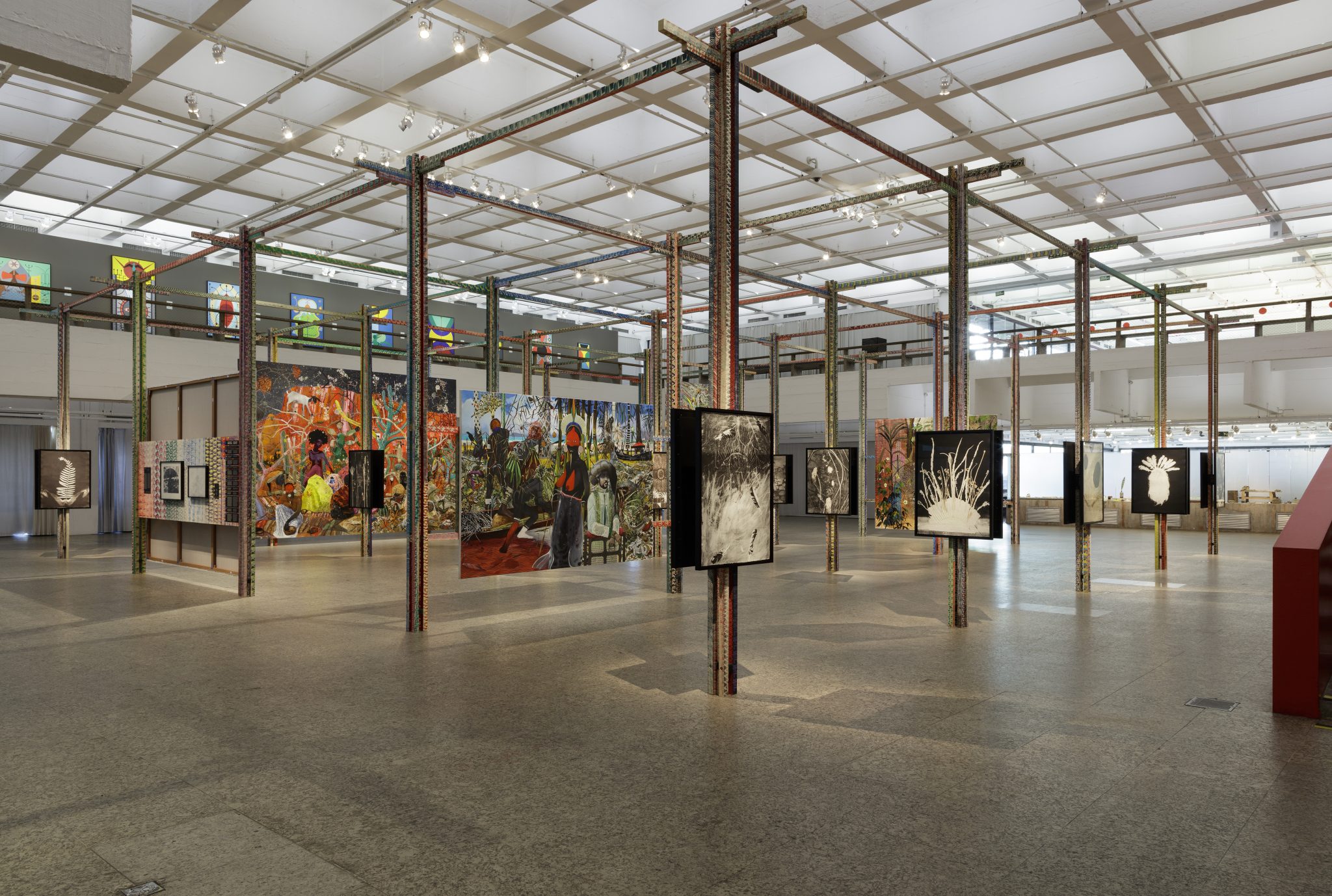 Luiz Zerbini, a multimedia provocateur with close ties to Brazil’s pop culture since the 1980s, paints a dramatic five-century history of this complex country at the exhibition “Luiz Zerbini: a mesma história nunca é a mesma (The Same Story is Never the Same)” at the MASP museum in São Paulo. His exuberant perspective offers a bold twist with obvious nuances of activism on epic national events. He appropriates heralded tableaus and vintage photographs of news reportage that have frozen historical moments with the calculation and guile of official history exposed by the artist in five large paintings in high-adrenaline, Tropicalia colors along with fifty monoprints of indigenous tropical plants, representing Brazil’s extraordinary plant world. The exhibition by the São Paulo-born artist, who adopted Rio as his hometown, showcases a long process of social, political and economic struggle intimately related to the troubled legacy of a mixed-race cauldron with deep-rooted socio-political dysfunction which persists in these times of sharply polarized views. 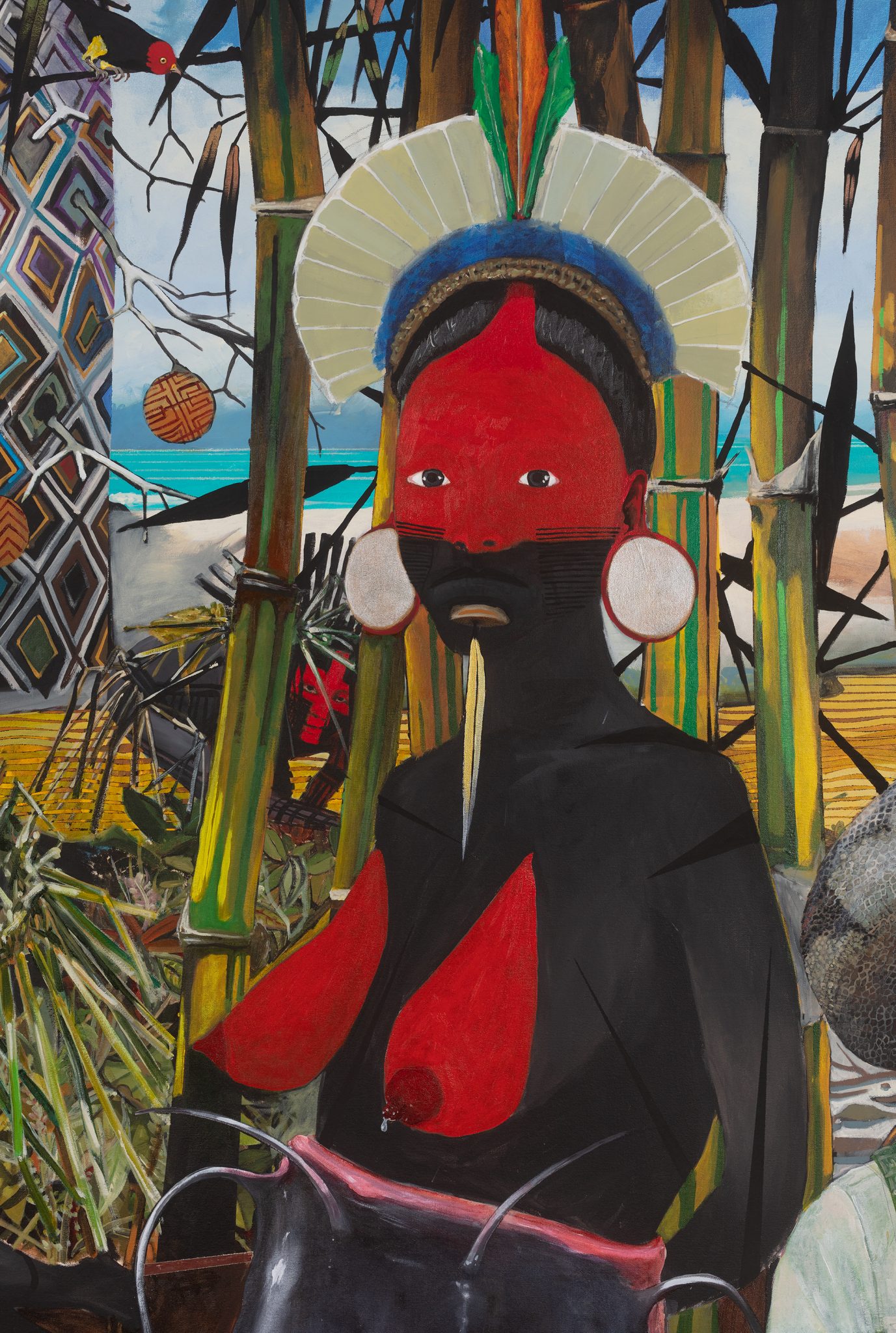 No matter how vanguard he can be, the sixty-two-year-old Zerbini never let go of the paint and brush tradition. His art nourishes his ardent view of things Brazilian: the Brazilianity of his themes, his fascination with tropical modernist architecture, his passion for Rio de Janeiro and its tropical light, and his boundless love for irreverence, music, plants and painting. All this was hinted at in his early days, when he got out of FAAP, the uni of São Paulo’s upper crust, with a degree in fine arts. The next step was photography classes with Carlos Moreira and watercolor with Dudi Maia Rosa, marriage to multi-talented comedienne and provocateur Regina Casé, and crowning participation in the iconic 1984 group show that changed Brazil’s art landscape: “Como Vai Você, Geração 80?” (How Are You, 80s Generation?). Along with artist friends Barrão and Sergio Mekler in the nineties, he founded the multimedia musical collective Chelpa Ferro (money in English), which participated in the 2010 São Paulo Bienal, and has since embarked on a successful international career. For all his continued irreverence and indisputable talent, Zerbini has a cult-hero following among young artists. 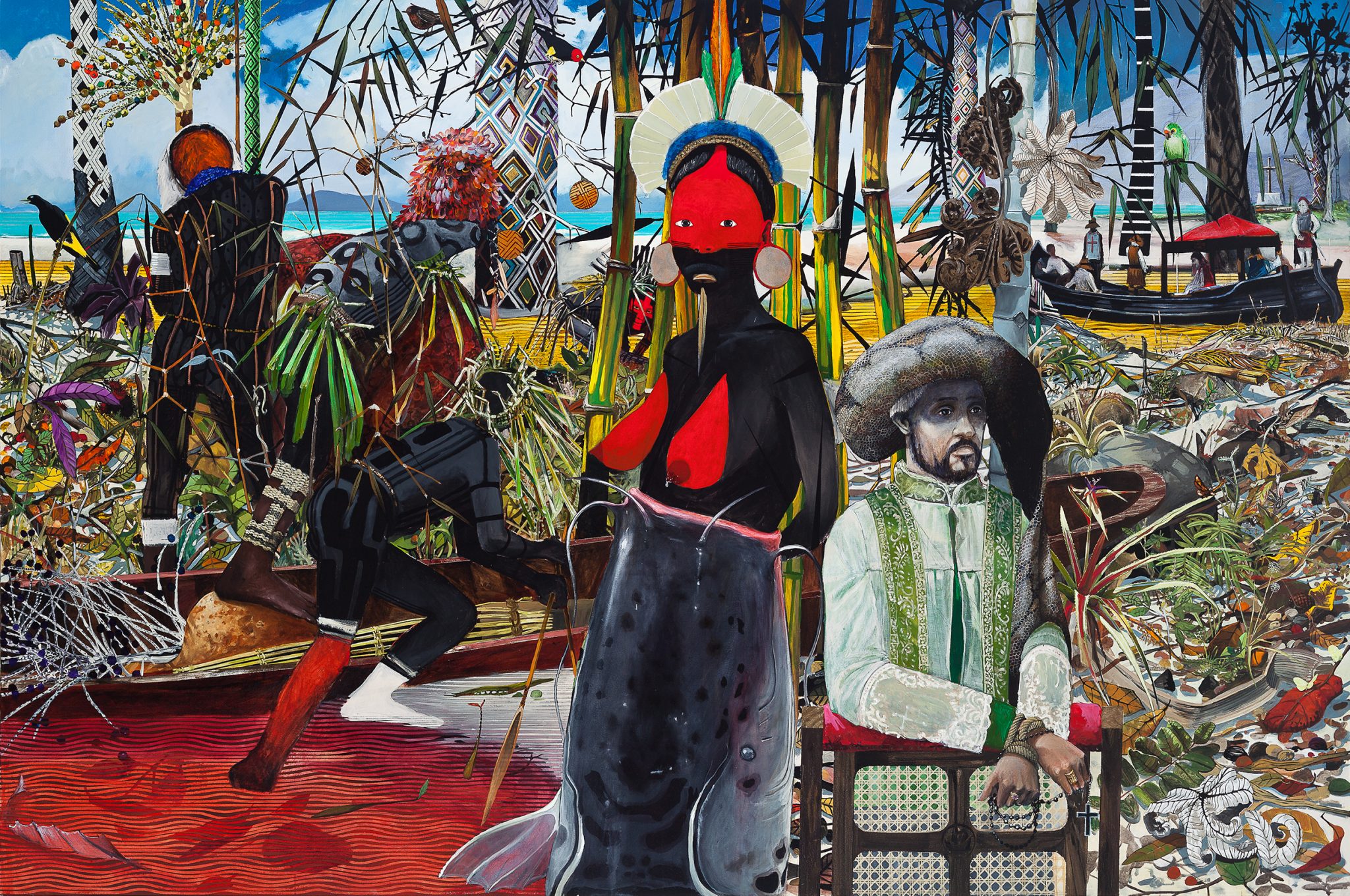 Social anthropologist and assistant curator of the MASP museum, Guilherme Giufrida curated the exhibition with the museum’s artistic director, Adriano Pedrosa. Here is what he has to say: 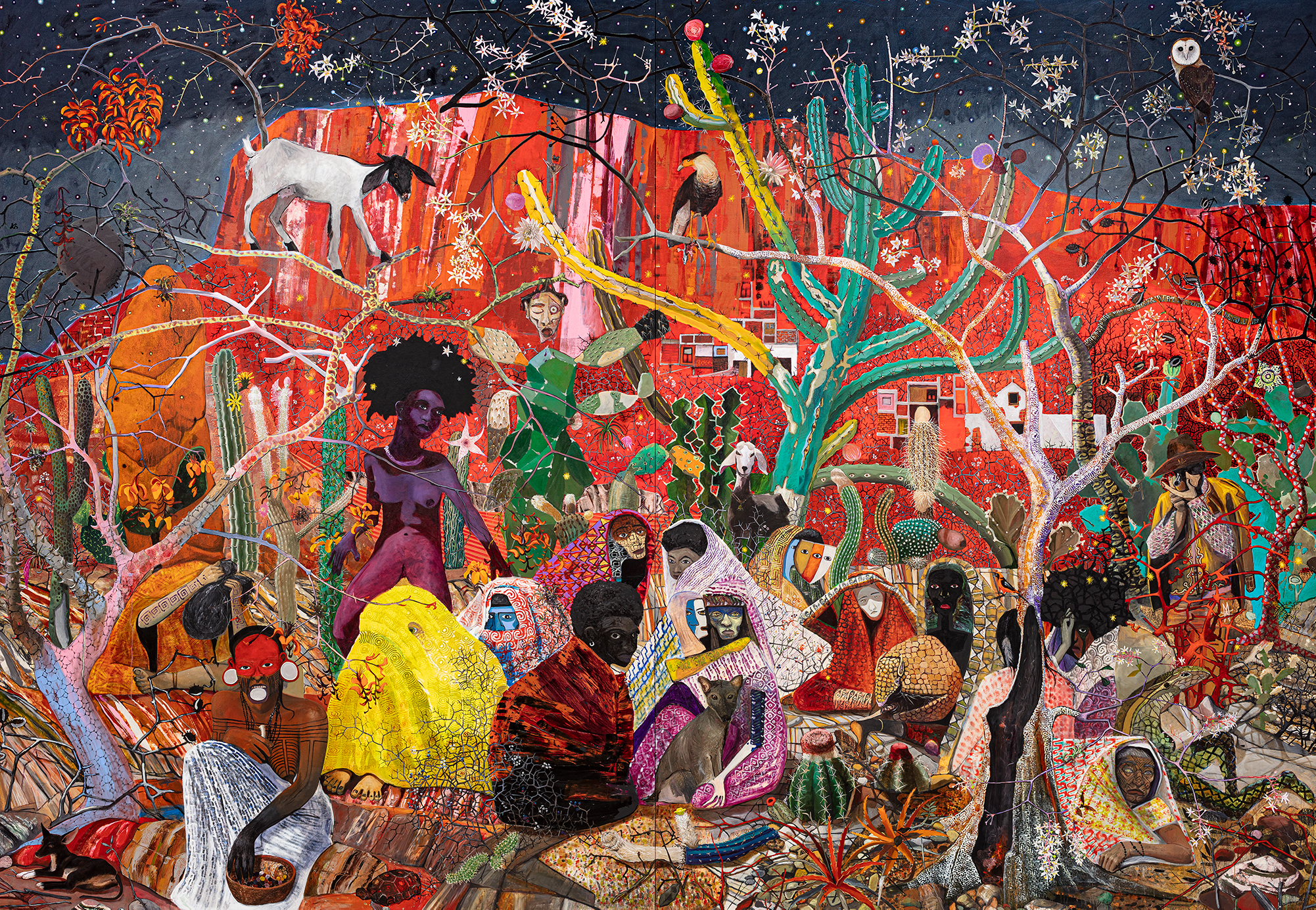 Guilherme, how do you read the historical revisionism in the five large paintings by Zerbini?

First of all, Zerbini recovered and combined several pictorial developments and techniques to create these paintings. He recovered a procedure he frequently resorted to in the nineties and had not used since then. It is the appropriation of images by other artists and photographers, which he combines in a threefold technique using collage, superposition and painting along with his own observation of the world. Another important element that reappears in the process is the human figure, which he had abandoned for the last twenty years. 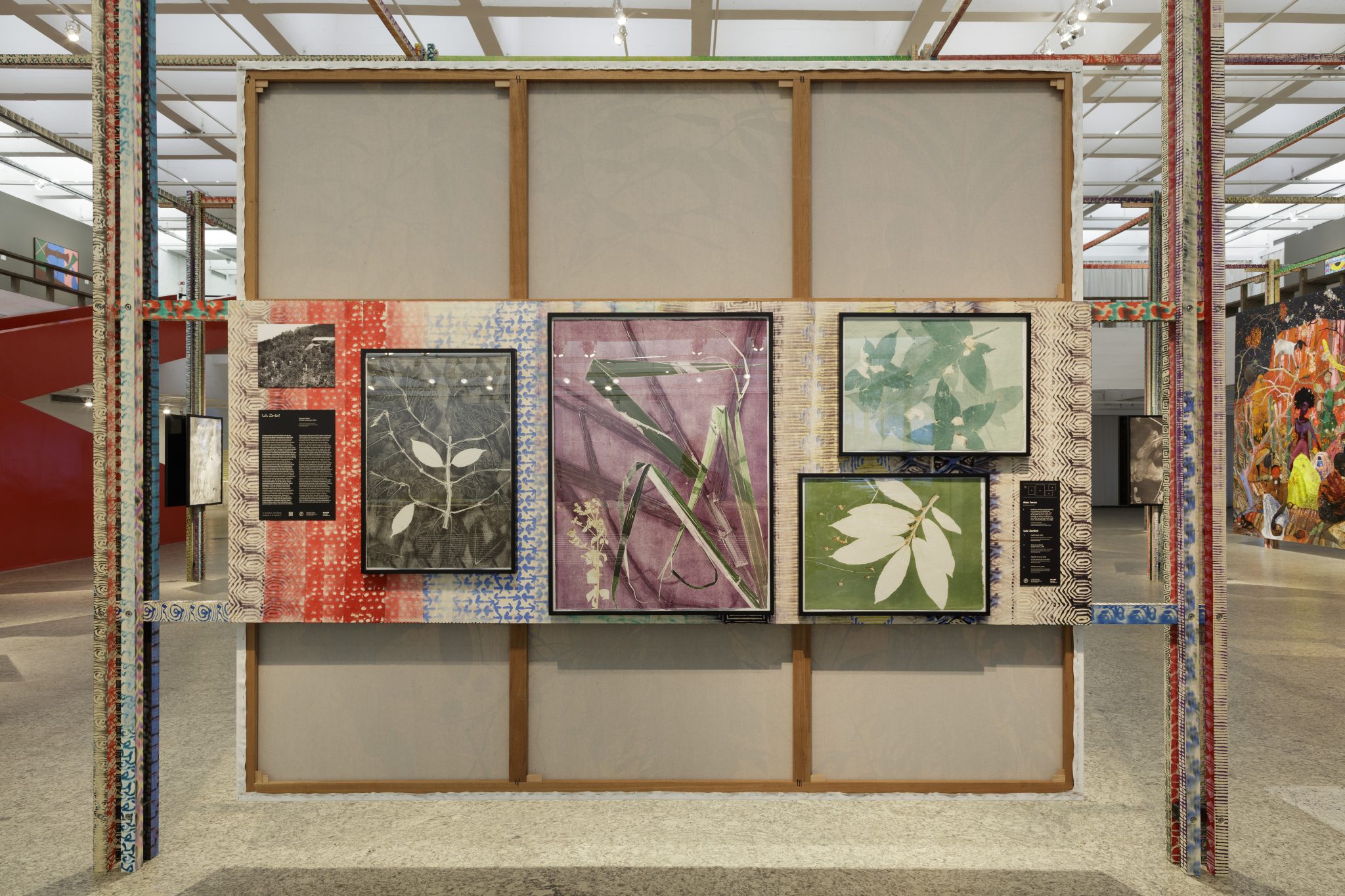 Evidenced in Zerbini’s oeuvre is his fascination with the plant world. Since 2016 he has developed a series of monotype prints in the Macunaíma series with tropical foliage of which fifty are in exhibition at the MASP. Explain the relation of the five paintings with revisionist narratives and the monotypes prints.

Zerbini’s fascination with the plant world began when he was a kid. During his teens in São Paulo he discovers a new passion, surfing, and drove down the mountain on weekends to the beach to practice the sport and be one with nature. In his early twenties he moves to Rio for good, where he still lives, and chose the lush mountainous Gavea neighborhood to live amid the exuberant tropical nature of the Mata Atlantica indigenous forest. No doubt, Zerbini is an urban animal, he is from a São Paulo upper middle-class family and has always been connected to nature. He first developed the monotype print series inspired by the iconic book “Macunaíma,” a 1928 modernist novel by Mario de Andrade, that was pivotal to revolutionizing Brazilian literature. 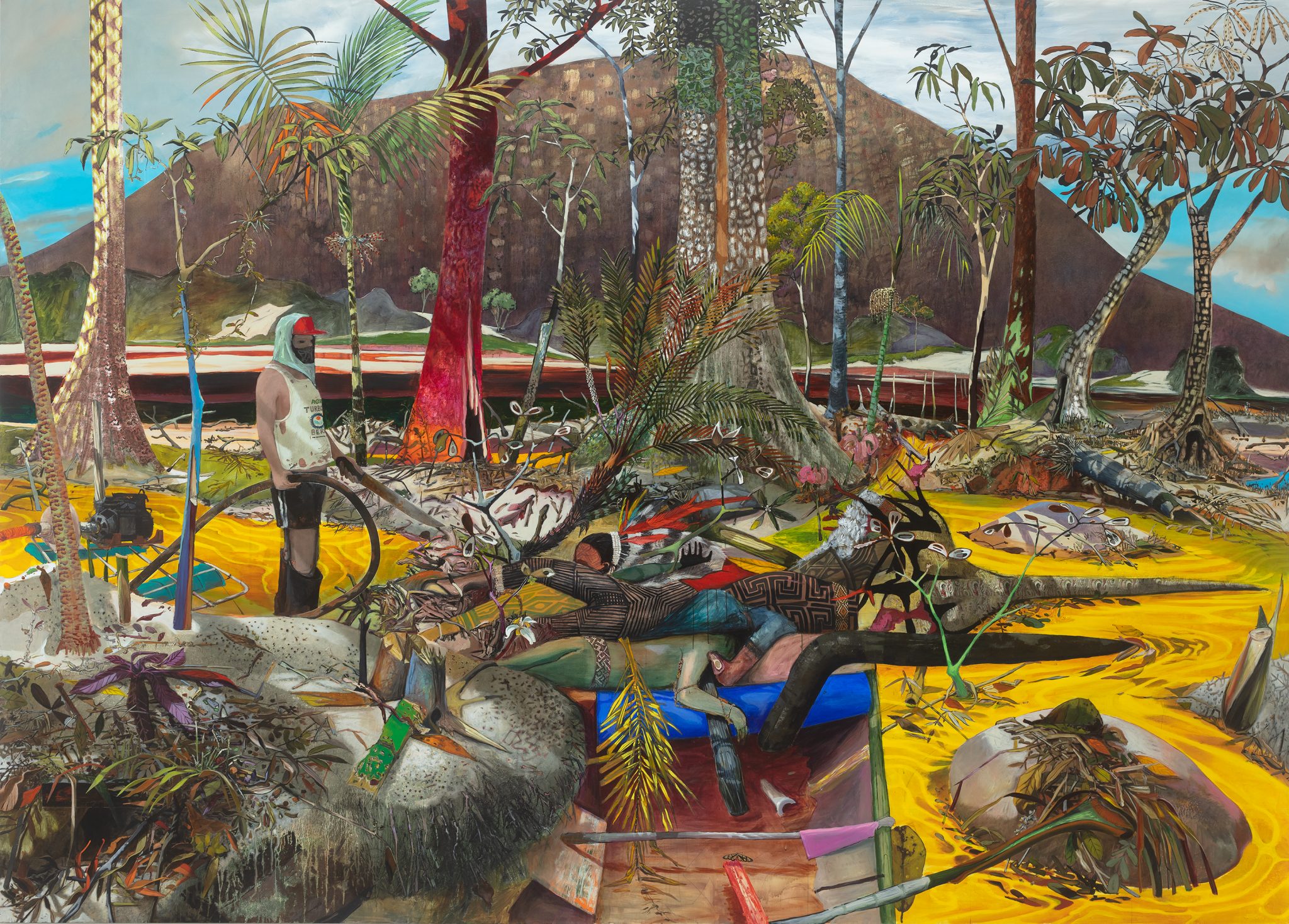 Among the large paintings, the canvas “Useless Landscape” (2020) is the one that portrays the tropical plant world that fascinates the artist. Tell us about it.

When Zerbini produced “Useless Landscape” he opted to “portray” leaves, fruits and tree trunks, that in today’s market are simply treated as commodities. The revisionism of the exhibition spans five centuries beginning with the European invasion of Brazil as seen in Zerbini’s “The First Mass” (2014), his view of the event that occurred when the country was discovered in 1500. The historical scene was reimagined and painted on canvas three centuries later by neoclassical painter Victor Meirelles and now appropriated by Zerbini’s critical revisionism. However, the exhibition also brings forth a vegetal perspective on history that reflects on the invasion of the Brazilian land by the Europeans and the violence brought by colonization on the indigenous plant world. 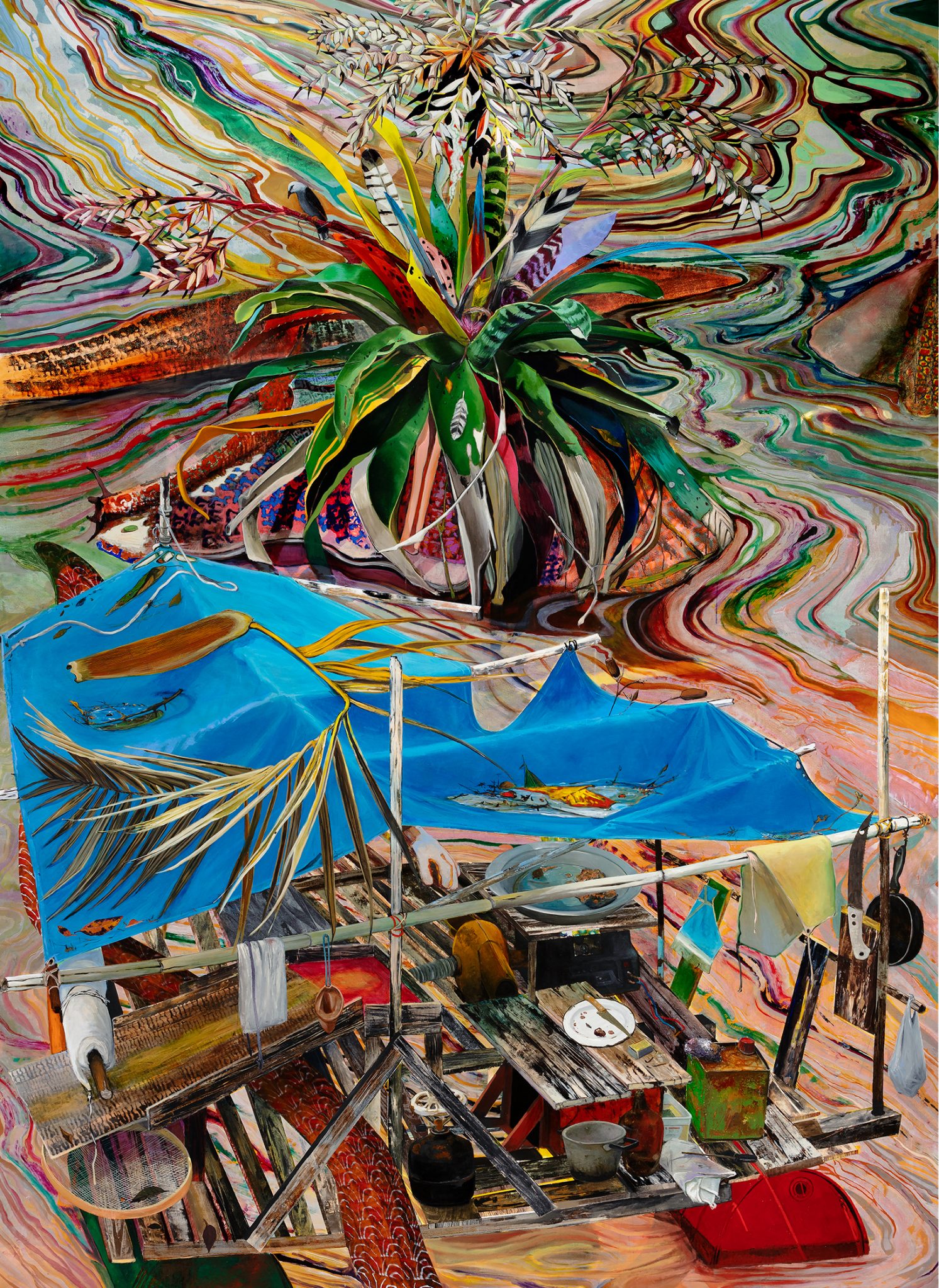 Please elaborate on the artist’s vegetal perspective since crops such as coffee and sugar cane, depicted in” Useless Landscape,” fueled main economic cycles in Brazil’s history.

Zerbini reflects on underrepresented groups, for example, the sertanejo people killed in the War of Canudos (1895–1898) seen in his painting “Canudos Did Not Surrender”(2021) or the indigenous people who witnessed the Portuguese invasion in the sixteenth century as seen in his 2014 appropriation of “The First Mass,” originally painted by Victor Meirelles in the mid-nineteenth century. Not only this, he also thinks about the exhibition through the perspective of the indigenous plant world that inhabited the soil then and now but has since suffered constant violence by society. However, Zerbini’s botanist soul firmly believes in the vitality of the vegetal world, a highly complex universe with much envied abundance, exuberance and intelligence that has a lot to teach us, humans.

The elaborate bilingual 200-page catalogue has texts by a handful of specialists. One is anthropologist Lilia M. Schwarcz, a top name in the field with several books published among them the 700-page “Brazil, uma biografia”(Companhia das Letras publishers, São Paulo, 2020, published in English as “Brazil, a biography”), co-written with Heloisa M. Starling.

We asked about Schwarcz’ acute historical view on Zerbini’s exhibition: 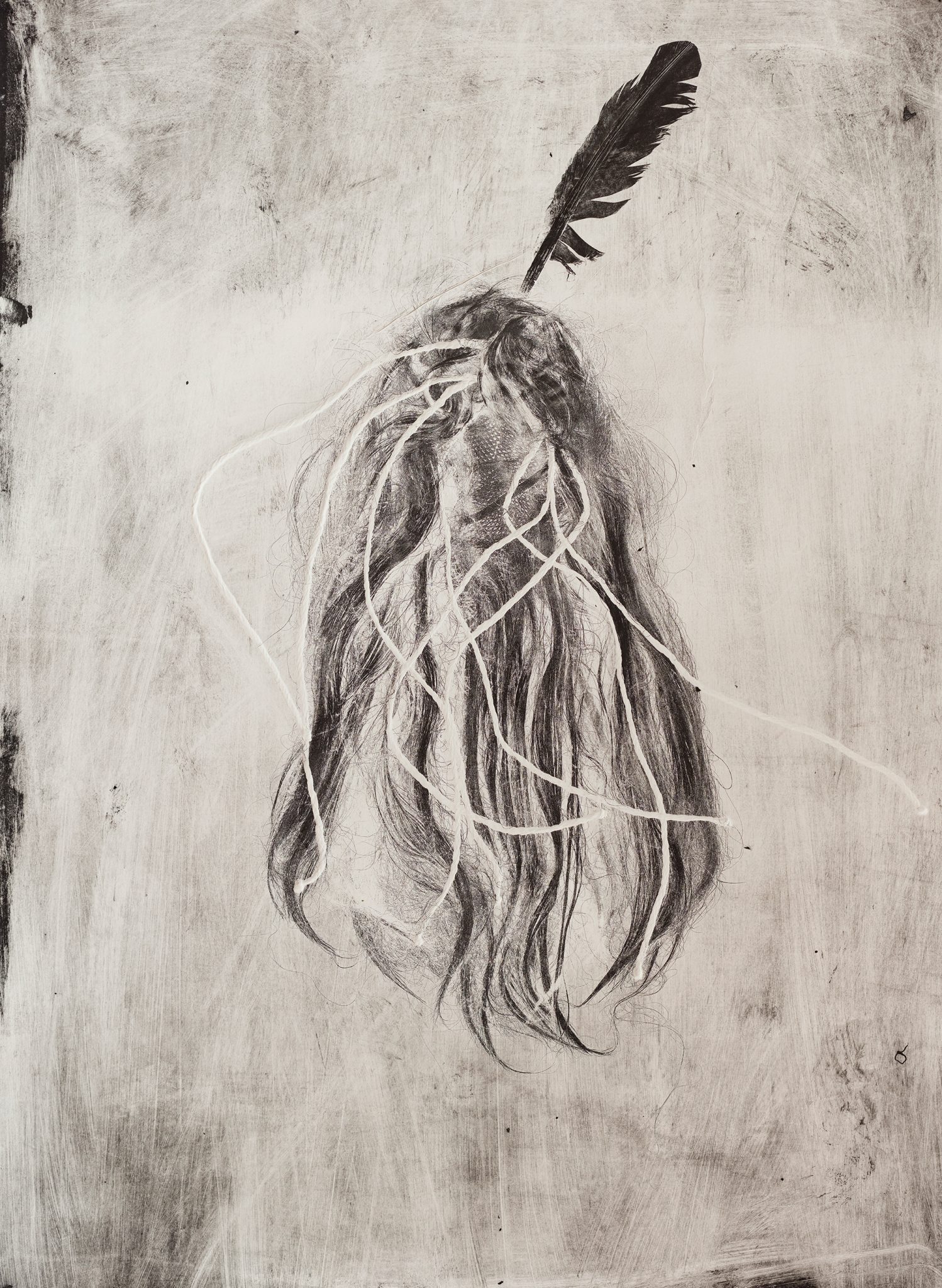 Lilia, as a historian specializing in our country’s five-century trajectory, what is the main issue that binds the group of large canvases displayed at the MASP exhibition?

It is the fact Zerbini highlights the historical violence since our early days in the sixteenth century. Brazil has always had disrespectful policies toward its indigenous populations and the sertanejo people (who live in the Sertão region, desert-like backcountry in northeastern Brazil). Both populations have had their lands continuously confiscated. However, what I find particularly interesting is Zerbini not only recognizes the violence but also is able to bring a redeeming vision to these works by depicting the strength of these peoples as well as the intrinsic force of nature. 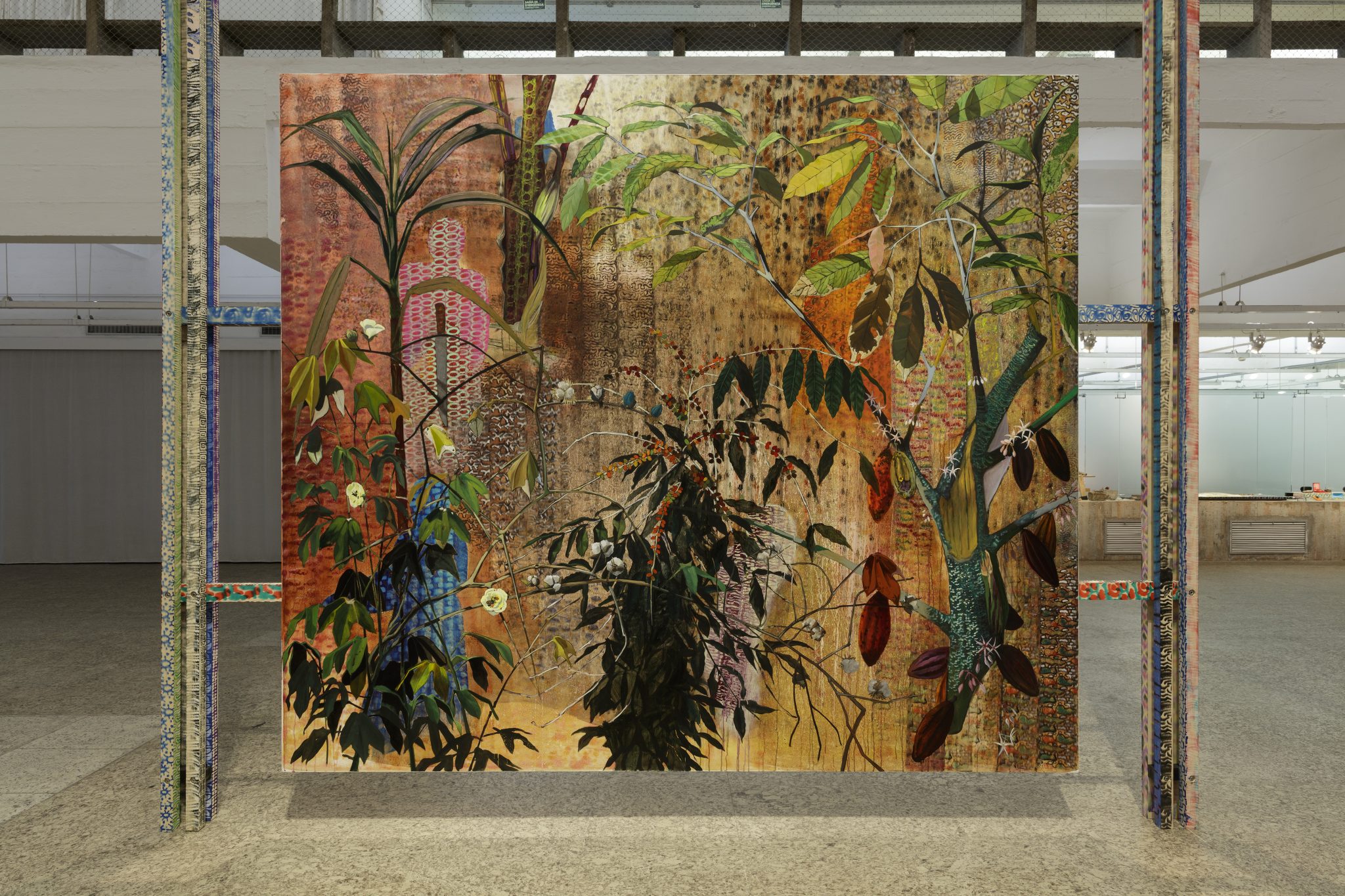 Since you mentioned the force of nature highlighted in his redeeming vision, tell us about it.

The massacres, both of the people and the ecology, are very clear for all to see in the paintings, but what is also engaging in his view is that the natural world is able to reinvent itself the same as the indigenous populations, the true guardians of the forestland, our planet’s vital natural reserves. Zerbini’s ecological concern is evident both in his paintings and his monotypes prints of plants. With time he developed into a botanist and is an enthusiast of Brazil’s natural world. The paintings denounce the devastation produced by our economic cycles, such as the coffee cycle, from the late eighteenth centuries to the 1930s, the basis of the country’s economy during this period, and before that the sugar cane cycle beginning in the sixteenth century. Zerbini researched our history and our plant world to come out with this exhibition that above all highlights our responsibility toward the future of our people and our plant world.