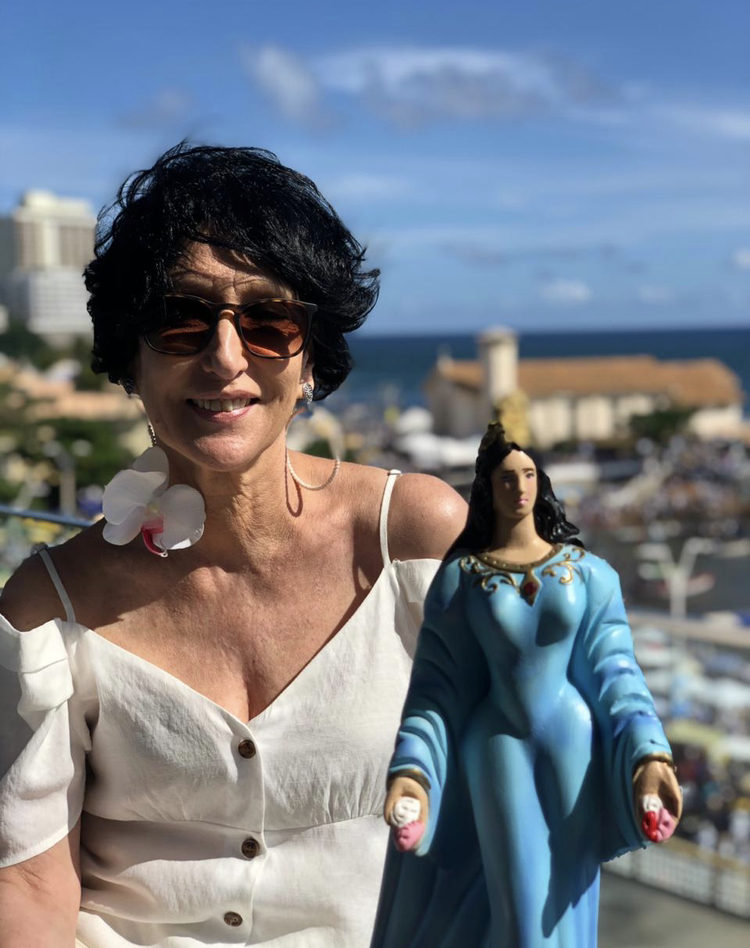 While the art world waits for the openings of two major events in September, the São Paulo Bienal and Rio de Janeiro’s art fair ArtRio, a grand exhibition is happening in Fortaleza, the capital city of the northeastern state of Ceará. “50 Duetos (50 Duets),” a group exhibition, is staged through December at the cultural space Unifor, the abbreviation for the University of Fortaleza, founded by Fundação Edson Queiroz. It celebrates the fiftieth anniversary of the foundation and its comprehensive art collection, one of Brazil’s largest, with pairings of over 100 artworks highlighting their visual and conceptual correspondence. Antonio Bandeira, Mira Schendel, Beatriz Milhazes, Leda Catunda, Maciej Babinski, Tarsila do Amaral, Candido Portinari, Cícero Dias, Djanira, Iberê Camargo, Geraldo de Barros, León Ferrari, Maria Martins and Tomie Ohtake are some names on display. There are also art deco works by Victor Brecheret and Ismael Nery, nineteenth century paintings by Pedro Alexandrino and Almeida Júnior and tableaux by Raoul Dufy and Dali. This is the third exhibition for the Edson Queiroz Foundation curated by Rio-born art expert Denise Mattar, our interview subject, who explains five of the “duets” on view. 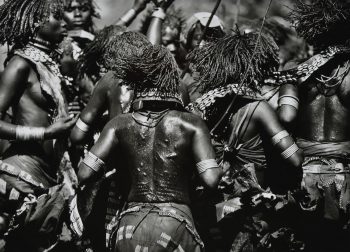 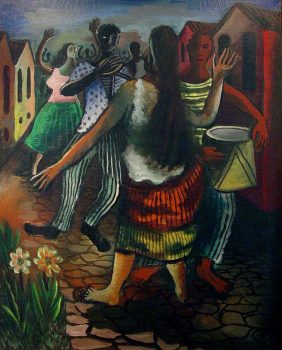 “Here we see the hypnotic condition of bodies dancing to the rhythm of the atabaque drums captured in the brushstrokes of Emiliano Di Cavalcanti (1897-1976), known as Di Cavalcanti or simply Di, an emblematic figure of Brazilian modernism. This celebration of trance-like rhythm is also portrayed in the black-and-white image of Sebastião Salgado (b. 1944), seminal professional of contemporary photography. Salgado’s photo captures a ritualistic dance in Ethiopia. During the eighteenth and nineteenth century, the atabaque drums were brought to Brazil via the commerce of African slaves. Samba and its wide range of cultural manifestations became a unifying popular artistic phenomenon indistinct of race and social class, rooted in the state of Bahia and matured in Rio de Janeiro, then the country’s capital. The fact it was related to Afro-Brazilian culture, white society only acknowledged its cultural significance in the 1940s. Di was a true bohemian, who loved samba and was always depicting it. Produced during the 1940s the painting ‘Batuque,’ an Afro-Brazilian word that refers specifically to the sound of the atabaque drums, celebrates samba in all its sensuous joy.” 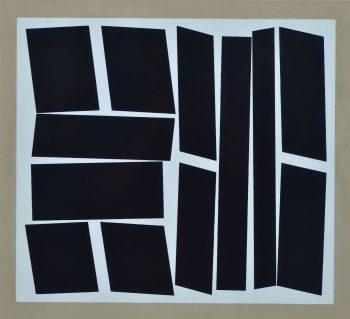 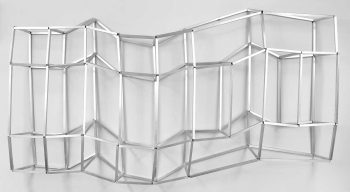 “For many art critics Hélio Oiticica (1937-1980) is one of the most influential artists of the twentieth century. His Metaesquemas series, from his neo-concrete phase, are now seen as experiences that led him to leave two-dimensional art behind and engage in performances and installations. Amounting to approximately 400 works in gouache on cardboard, the Metaesquemas series are exercises in the organization of asymmetrical geometrical forms and color into compositions that succeed to give the impression of malleability. Ceará-native Luiz Hermano (b. 1954) has an oeuvre that includes drawing, print, painting, sculpture and tridimensional textures produced by ‘weaving’ an accumulation of small artifacts from daily life or construction materials, that are displayed vertically or horizontally, depending on the piece. Are they objects? Are they sculptures? ‘Cubo Movediço’ (Moving Cube), an ongoing series from the mid-1990s, are compositions with hollow elements produced with aluminum sections turned into flexible sheets made from sequences of geometrical figures.” 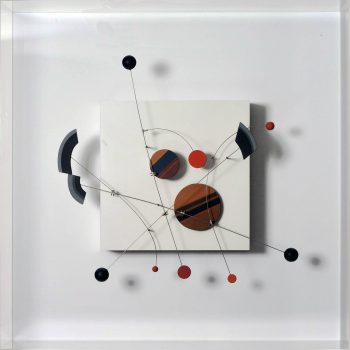 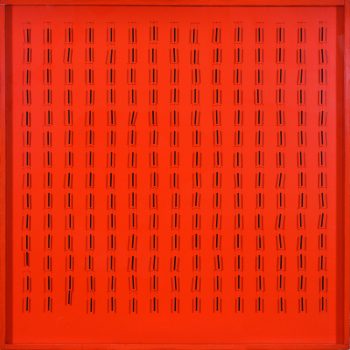 “Kinetic art is based on the illusion of movement or actual moving pieces. Movement has always been the core interest in the oeuvre of Abraham Palatnik (1928-2020), hailed by international art critics as one of the pioneers in the genre. It is undeniable the originality of his Cinecromáticos (Kinechromatic) series, developed in the 1950s uniting light and movement. Ceará-born Sérvulo Esmeraldo (1929-2017) is also among the pioneers of kinetic art. His works as a sculptor, engraver and painter are known for their constructivist rigor. When Esmeraldo lived in Paris in the 1960s he befriended Latin American artists, like him, who had fled to Paris to expand their knowledge of art, among them avant garde artists of the kinetic movement such as Argentinean Julio Le Parc and Venezuelans Jesús Rafael Soto and Cruz-Diez, to whom he remained close all his life. Esmeraldo’s inquisitive mind was immediately attracted to the quasi-magical, hypnotic effect of the experiences in kinetic art. The work in exhibition, titled ‘7521,’ is part of the historical series named in French, Excitables, created during his time in Paris.” 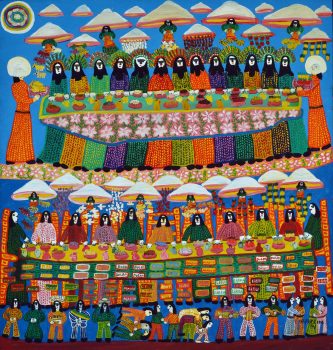 “Since the heyday of humanity’s official history, works of art refer to works made before by revisiting them, creating a new reading, a new translation, a new narrative. In today’s globalized times with infinite cross-cultural interchange in most fields, we permanently ask ourselves if there still remains anything ‘purely original.’  Nelson Leirner (1932-2020), one of the top names in Brazilian contemporary art, appropriated works by other artists such as Da Vinci, Mondrian and Duchamp, to name a few, lending them his own peculiar, ironic twist. Guided by his sarcastic, critical and iconoclastic take of life and art, he added elements of pop culture to the originals. We can enjoy the depth of Leirner’s irony in ‘Relógio’ (Clock), an appropriation of Da Vinci’s fifteenth-century mural ‘The Last Supper.’ Throughout art history this pivotal moment in Christianity as seen by Da Vinci has inspired numerous artists in different styles such as Antônio Poteiro (1925-2010) in his 1994 painting ‘Ceia’ (Supper).” 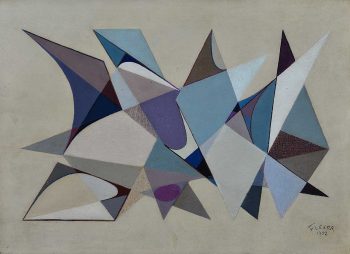 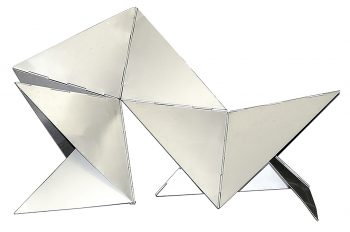 “Russian-born Samson Flexor (1907-1971) was already a mature artist when he fled his native country to establish himself in Brazil in 1948 to become one of the precursors of Brazilian abstractionism. Flexor favored freedom in art, was against the dogmas of concrete art followed by many artists in the 1950s, aiming at a dynamic narrative through the combinations of lines, planes, crisscrossed diagonals and subtle color intersection. He believed abstract art was more of a musical than a mathematical construct to which he applied renaissance-based theories of proportion and harmony.

Produced in 1952, ‘Composição geométrica’ (Geometrical Composition), an ode to energizing rhythm unfolding in space, influenced the art of Lygia Clark (1920-1988) some years later. In the 1950s Clark, who belonged to the group formed around concrete art, became one of the exponents of the movement which contributed to the renewal of Brazilian visual arts. From 1959 onwards, she concentrated in surpassing the limits of the surface thus creating the Unidades (Unit) series, that had the frames painted as part of the picture. That same year, Clark produced Casulos (Cocoons), metal objects that can be folded which led to her most iconic series, ‘Bichos’ (Critters). These are movable metal sculptures in basic geometric forms, that unfold in space, articulated by simple metal hinges. For art critics the Bichos series is one of the foundations of contemporary art.”