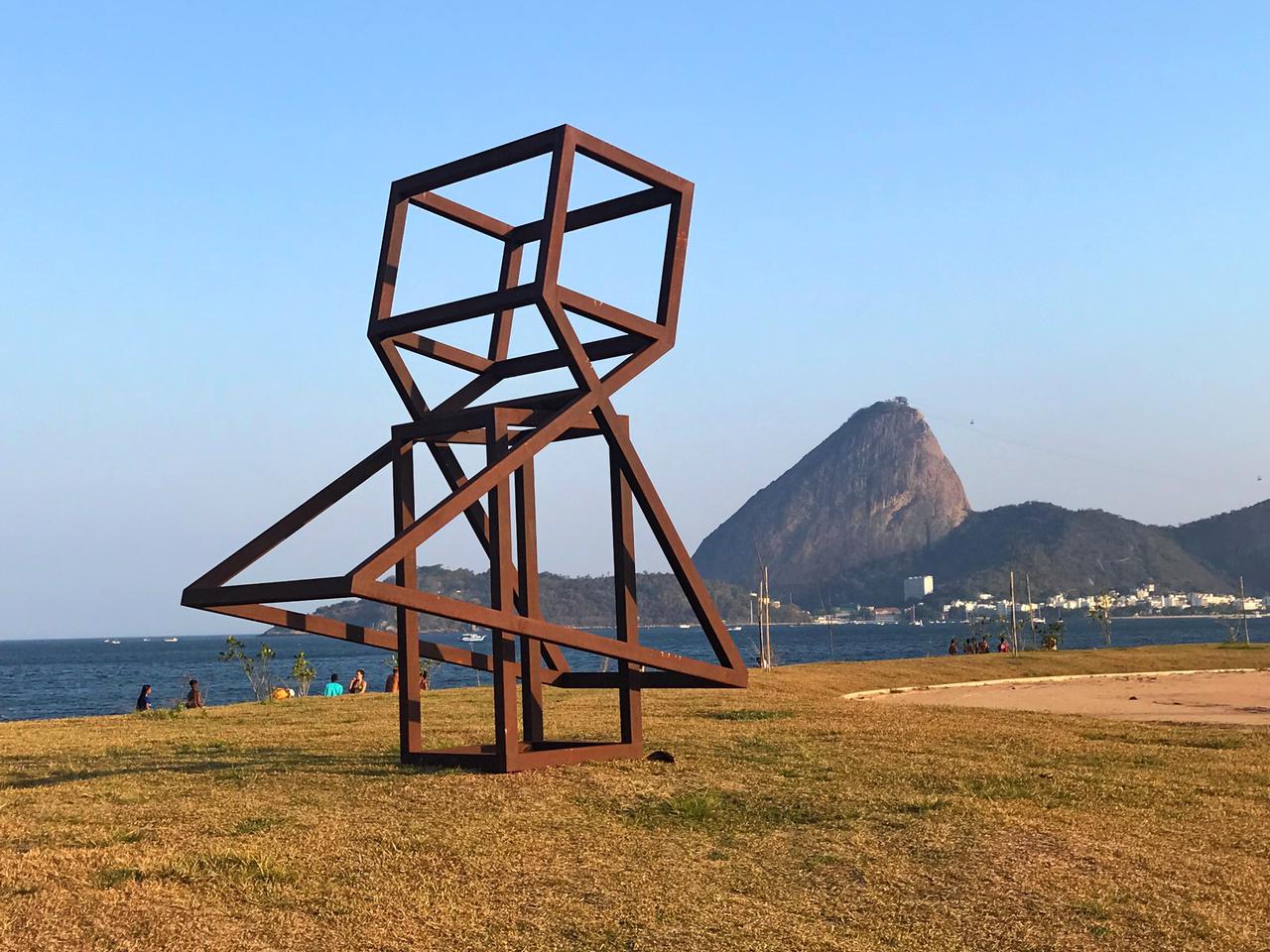 Brazilian art mourns the death in mid-May of artist Carlito Carvalhosa, fifty-nine-years-old, one of the founders of the young, all-male 1980s  revolutionary group, Casa 7, and an artist of Galeria Nara Roesler’s (GNR) portfolio, which is working on a tribute exhibition. Carvalhosa was interviewed by Newcity Brazil during his last solo in the gallery’s São Paulo venue in December 2017.  Artist José Patricio is currently on view in GNR’s São Paulo space and the Rio branch prepares a collective exhibition curated by Rafael Fonseca.

In the gallery’s new location in Chelsea, multimedia artist Raul Mourão, our interview subject, is the protagonist of the current solo exhibition, “Empty Head.” In the provocative poetics of the Rio-born artist are iconoclastic layers that genuflect before Duchamp and serve as metaphors for his views on Brazil’s cultural tenets and sociopolitical issues. The show includes three impressive corten-steel sculptures weighing over half a ton each. They are a heavyweight crisscross of construction beams free of hinges of two elements, a base topped by a mechanical swing. They belong to the Rebel series, which criticizes the security fences that “protect” from urban violence buildings and homes in Brazilian cities to the point where these structures are now regarded as a normal feature of the architecture and the urban environment. Mourão, who ditched architecture for the arts, amuses himself by creating these mechanic structures that bring to mind Don Quixote’s windmill giants, as interactive objects that swing, play with scale, defy balance and tackle bourgeois paranoia.

Another group of work that defies gravity is the Garrafão series. These table-size interactive sculptures are made up of two mediums: a green glass jug (garrafão) topped by a structure of carbon steel rods balanced over the bottle finish. Like the Rebel sculptures they also swing when touched by the viewer. The wit and simplicity of this series are at the center of Mourão’s “Bang Bang #1” video, filmed in a firing range as the artist explains in the interview. Wrapping up the solo exhibition is the most iconoclastic series to date by the talkative, temperamental and astute Mourão: “The New Brazilian Flag.” In a nod to the present government, the circle that displays the national motto, “ordem e progresso” (order and progress), at the center of the county’s banner is replaced by a void. 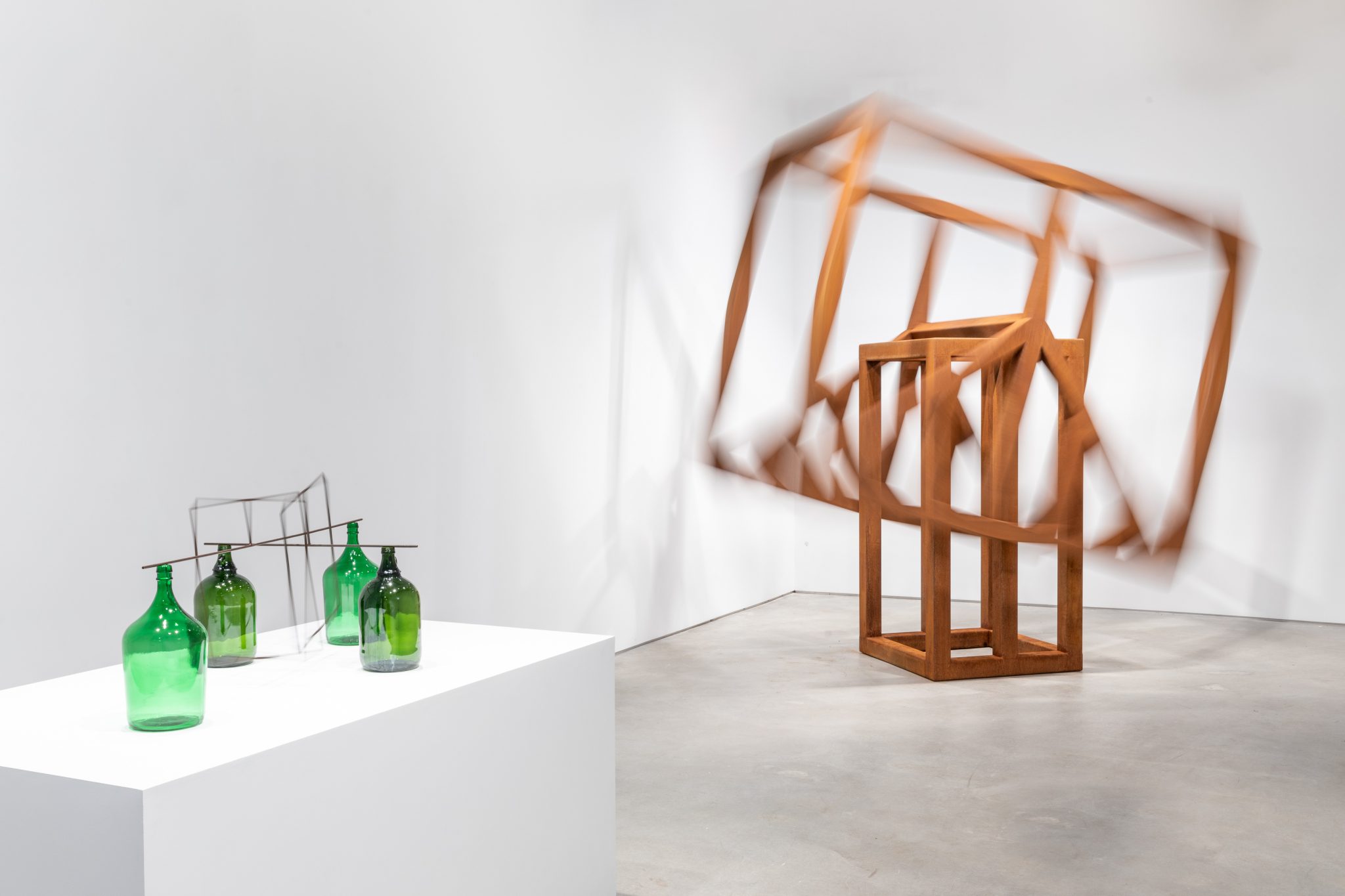 Raul, what is the idea behind the exhibition “Empty Head”?

Another name for “Empty Head” could be “works of the pandemic.” All three corten-steel sculptures of the Rebel series and the glass bottles works were conceived during the 2020 lockdown under the signs of fear and anguish. The flags and the Bang Bang video were not, but they act as vessels of the spirit of the pandemic.

Your works have a clear provocative edge. The current show in New York as you mentioned displays three flags produced in 2019 from “The New Brazilian Flag” series, which began as an urban intervention in 2018 in downtown Rio. What sparked this political commentary?

The series took off during carnival of 2018 when I hooked the flag in the Arcos da Lapa (Rio’s old aqueduct built over arches), and registered the urban intervention in a photo. From then on it became an ongoing series now on the eleventh flag. Six of them are also in exhibition at Casa Roberto Marinho museum in Rio.  It is a political commentary about the void of leadership in present-day Brazil and the violence perpetrated against the nation by the misgoverning of the present government.

Also on display is the video “Bang Bang #1.” It is about urban violence but what are other layers in this work?

This five-minute video shows metallic structures balanced on glass bottles, which are destroyed, one by one, by bullets fired from a gun. The slow-motion photography is by Daniel Venosa, edited by Jonathan Nunes and the original soundtrack by producer and musician, Ricardo Imperatore. We took sixty sculptures to a firing range and they were shot at by a professional using six different kinds of firearm, over a period of three hours. It tackles the theme of violence, a recurrent subject in my work. In addition to urban violence, the act of shooting at a work of art also refers to the hatred some people feel about art. It deals with the conflict involving those who produce art and those who seek to attack and destroy arts and culture.

To understand you better as an artist, let’s delve into your peculiar humor. Tell us about your first video “7 Artistas” (7 Artists).

It was the first one I ever made. It is a provocation with humor as its starting point based on a physical performance albeit, in this case, an involuntary performance with no predesigned choreography. The video shows the bodies of seven artists, each one hanging on to the wall like a painting. It is a visual gag that shows the artists on the wall in the same way as they hang on the walls in the homes of art collectors. Every time I heard a collector say “I have so and so artist on the wall of my home,” I imagined the artists themselves – not their works – hanging on the wall. So I invited seven of my friend artists and “hanged” them on to the walls of the gallery for an exhibition that never happened. It’s a making-of of a montage of an imaginary exhibition.

Now let’s move on to your experience living in New York.

I opened my New York studio in July 2013 in Harlem together with Brazilian artist Gustavo Prado and a group of local artists Renee Cox, Sanford Biggers, Fab Five Freddy and Adrian Kondratowicz. We had our community in a building at West 149th/Broadway through January 2019. During the period I made friends with other artists, musicians, DJs and local film directors – Janaina Tschape, Ilhan Ersahin, Dj Greg Gaz, Daniel Perlin, Ray Smith, Mauricio Zacharias, G T Pellizzi, among other greats. During this time I was travelling back and forth because I kept my Rio studio opened producing my work. I’ve had studios in both cities since 2013, except for now during the pandemic. 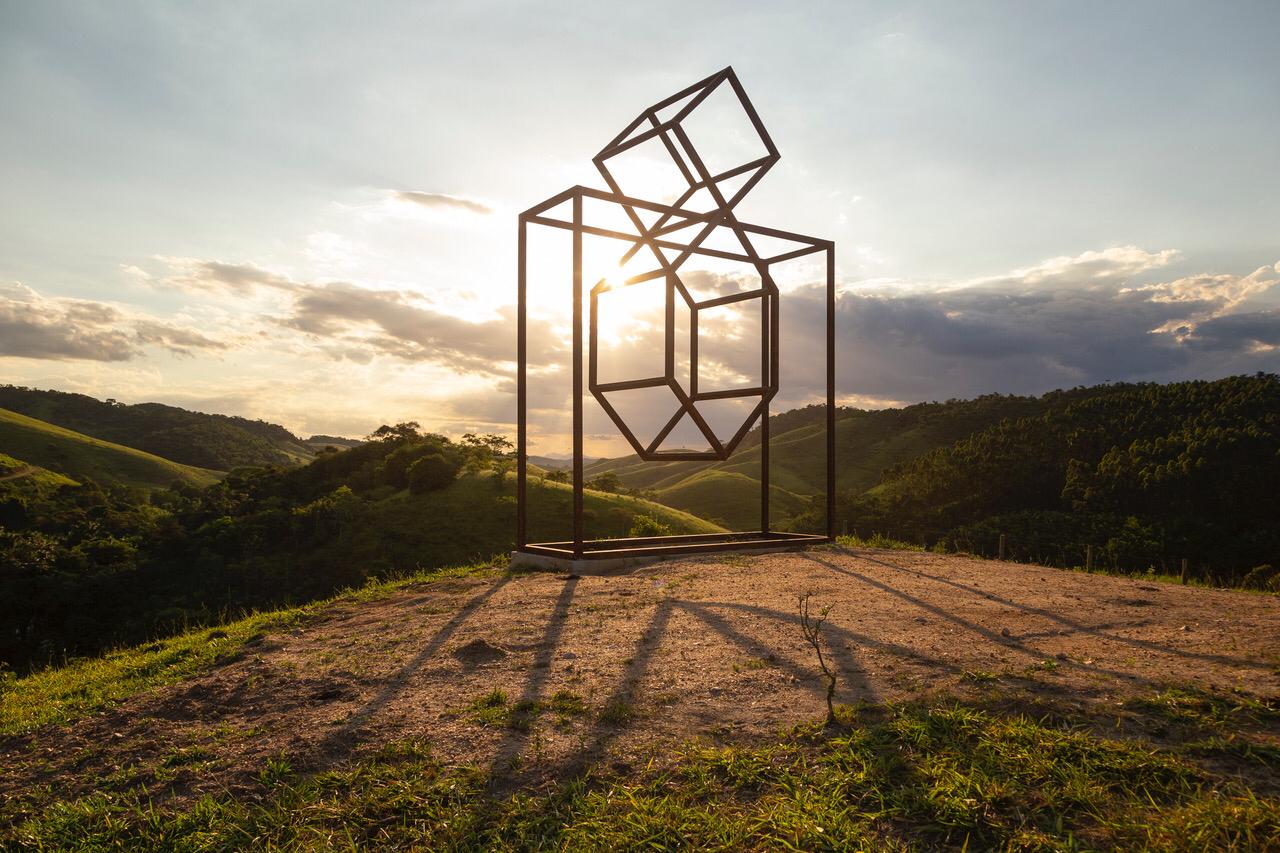 The show’s three large corten-steel sculptures of the Rebel series were flown from Brazil?

No, since December 2019 I produce my large sculptures in Philadelphia. In the show “Rebel #3,” “Rebel #4” and “Rebel #5” were all produced there in 2021, where we have developed ten sculptural works up to now. 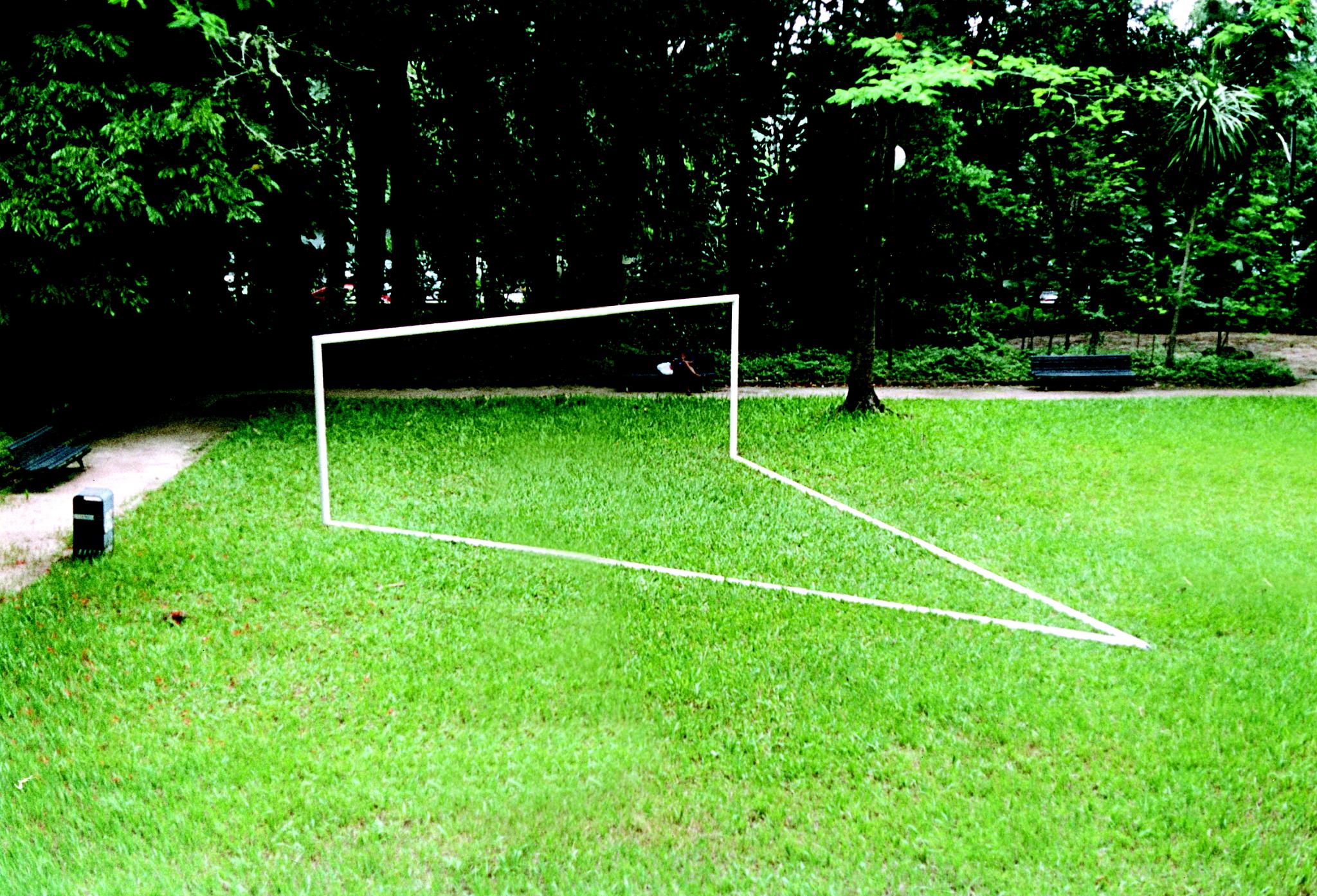 To further explain the broad narrative that characterizes your work, let’s talk about “Penalty” (1993). It’s not on view now, but is very revealing of your many interests.

I’m crazy about soccer! I watch the games, I play but I always thought it strange that in Brazilian art history there are few works on this spectacular game visually so rich. So I developed works having soccer as the motto beginning by the design of the soccer field, the territory of the game. Penalty is the first of the series; it is a simple linear structure of the triangle of the penalty area designed from the goal posts in the official soccer field dimensions. This is an emblematic moment of the game, when the attacker and the goalkeeper are confronted, the game is suspended, everyone is silenced and a crucial duel takes place between two players. By transporting it to the gallery I pay an homage to this moment in the soccer game. Many who went to the exhibition didn’t have a clue of the distance between the goal posts and the penalty. I like to think of it as a mathematical dislocation of this geometrical form from the field to an art gallery. 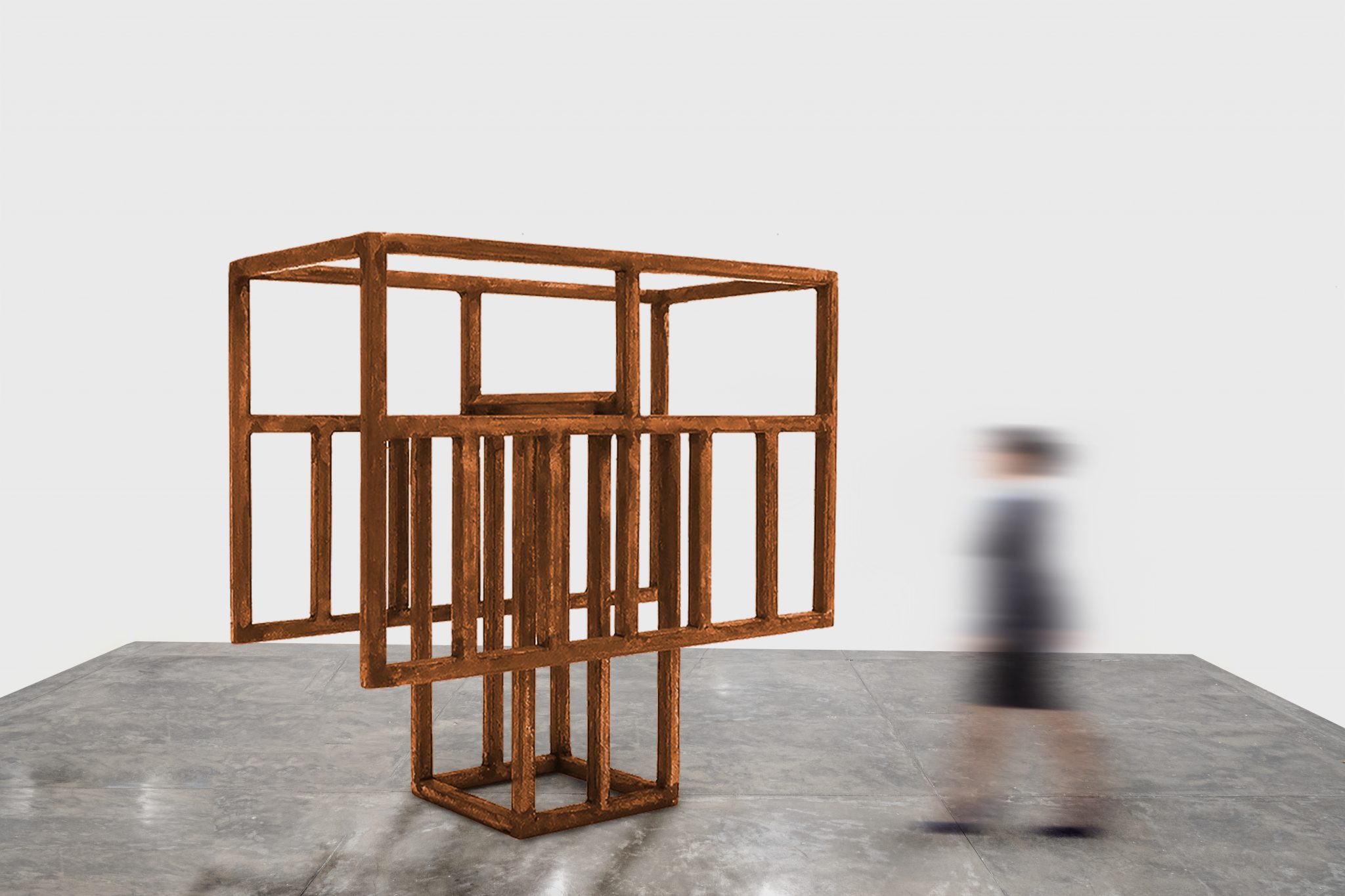 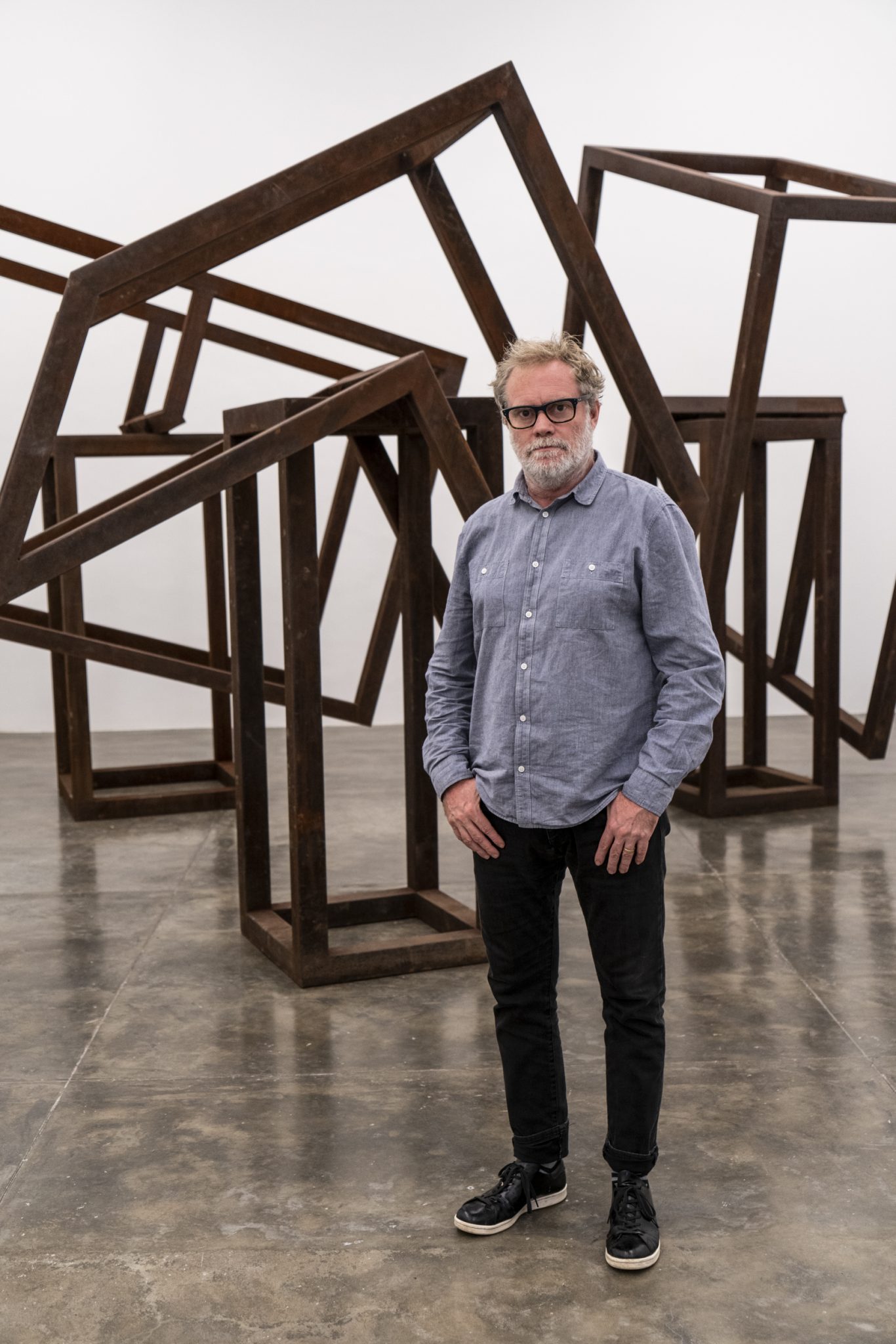