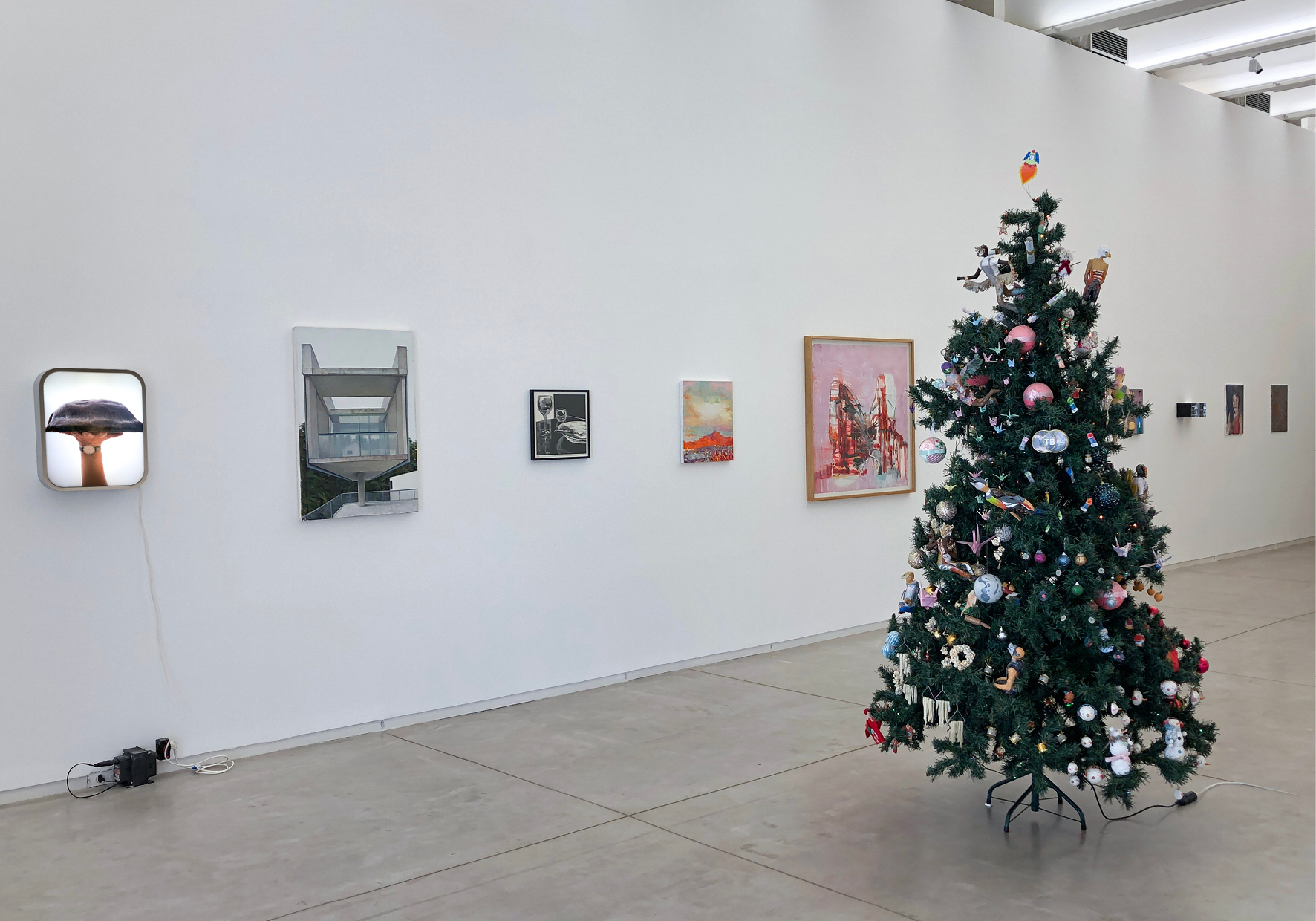 2020 has been a bizarre year with an uncomfortable stew of feelings. The December exhibition of Galeria Kogan Amaro spreads a message of hope through its group exhibition “Amigo Secreto” (Secret Santa). The entire proceeds will go to two São Paulo-based humanitarian non-governmental organizations, Childhood Brasil, aimed at protecting socially vulnerable children and teenagers, and Pimp My Carroça, involved with street sweepers and urban sanitation workers. Participating in the significant social action are twenty-seven artists from the gallery’s portfolio, among them Daniel Lannes, Eduardo Srur, Élle de Bernardini, Fernanda Figueiredo, Marcia Pastore, Mundano, Nazareth Pacheco, Shizue Sakamoto, Sophie Vallance and Tangerina Bruno. Also on view is Gabriel Botta, who has a January 2021 solo exhibition at the São Paulo-based gallery, as well as Scottish-born Daniel Mullen, who is scheduled for his first exhibition in Kogan Amaro’s Zürich branch in February. 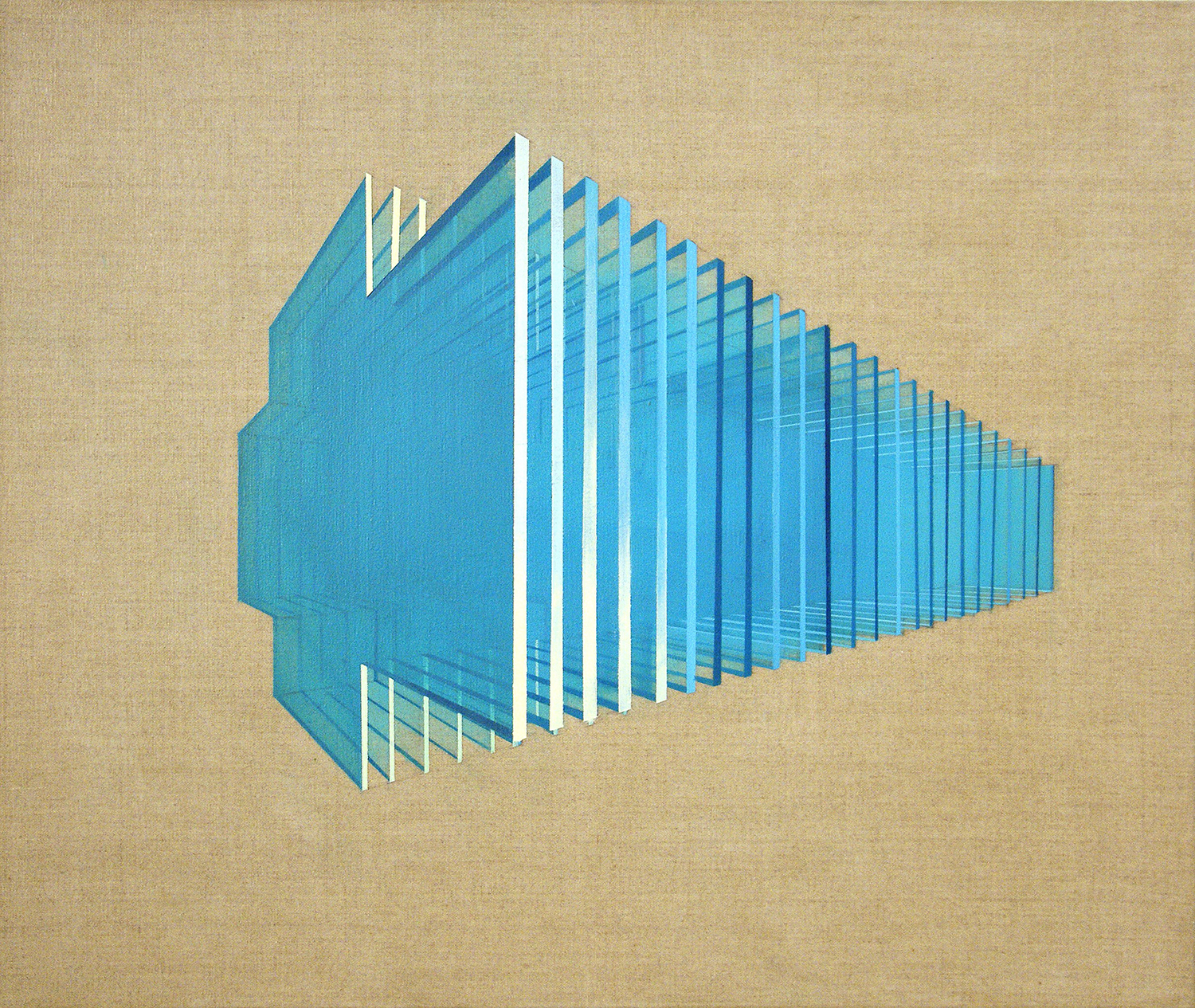 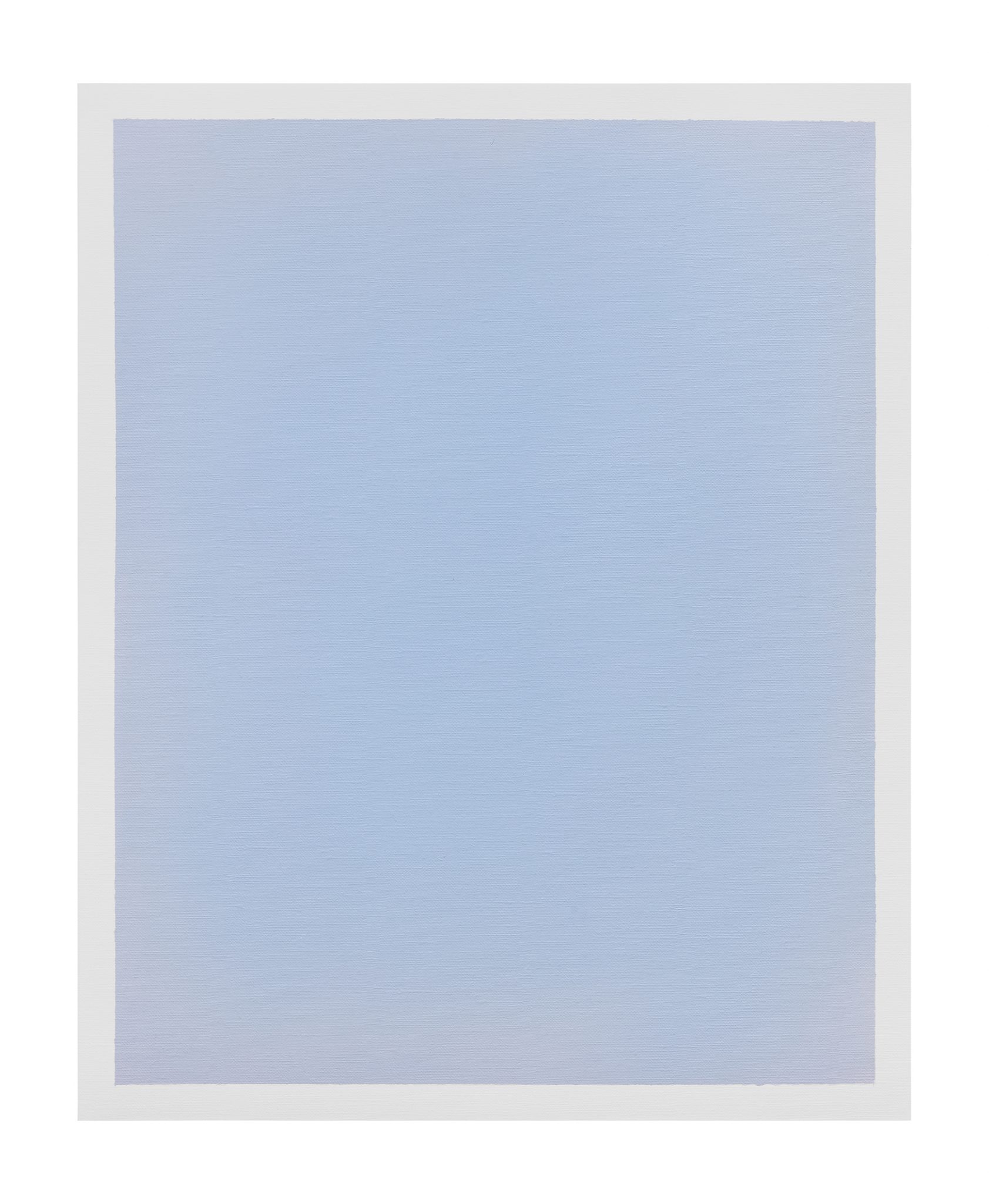 The gallery’s portfolio reflects the daring spirit of partners Ksenia Kogan Amaro and Marcos Amaro, both thirty-six years old. She, a Moscow-born classical pianist, he, a São Paulo-born artist, philosopher and entrepreneur. The young art patrons live between São Paulo, Itu (São Paulo state, where they manage FAMA museum and FAMA Campo, dedicated to land-art projects), and Zürich, where the gallery’s international branch opened in 2019. This year, Kogan Amaro was fast to adapt to the new scenario participating in several online viewing rooms, including SP-Arte and Art Basel in Miami Beach. In November, Marcos Amaro, the artist, launched a book of his sculptures and paintings, and the couple inaugurated new installations and exhibitions in the FAMA museum, among them two-hundred small-format drawings by the iconic Tarsila do Amaral (1886-1973). One of the gallery’s plans for 2021 is to build a more inclusive artist portfolio, with more Afro-descendants and LGBTQ artists. 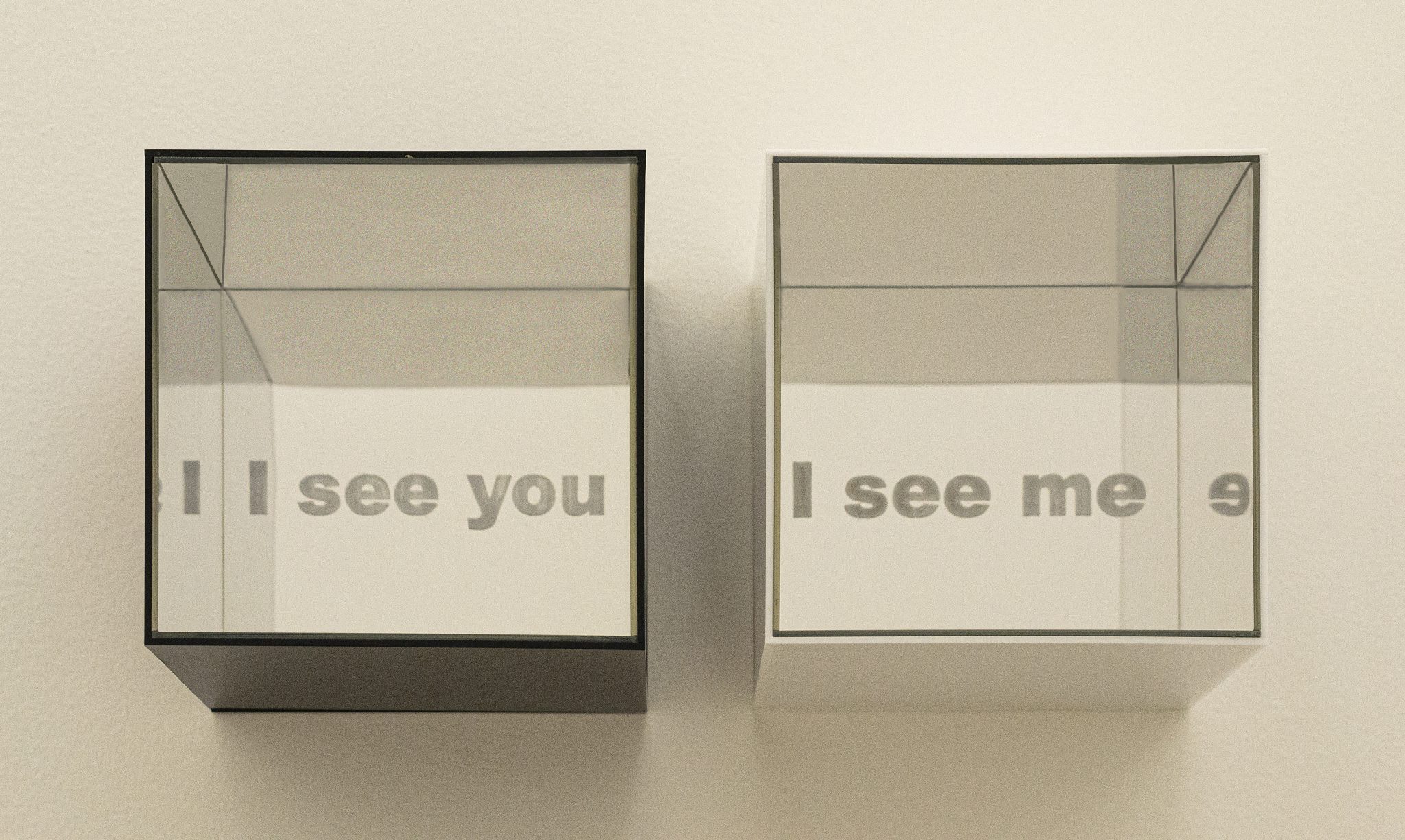 Unlike many artists who dismiss the Christmas holiday as a tacky consumer-driven craze, Andy Warhol loved the festive season, and so does Tangerina Bruno. The orange-color double name refers to the multimedia artistic entity of self-taught art twins Leticia and Cirillo. Tangerina Bruno is, in fact, the citrusy family name of the twenty-seven-year-old twins whose peculiar, hyper-realistic work has a crush on society’s common cultural narrative, mocking pop culture through personal, petty observations of commonplace things. 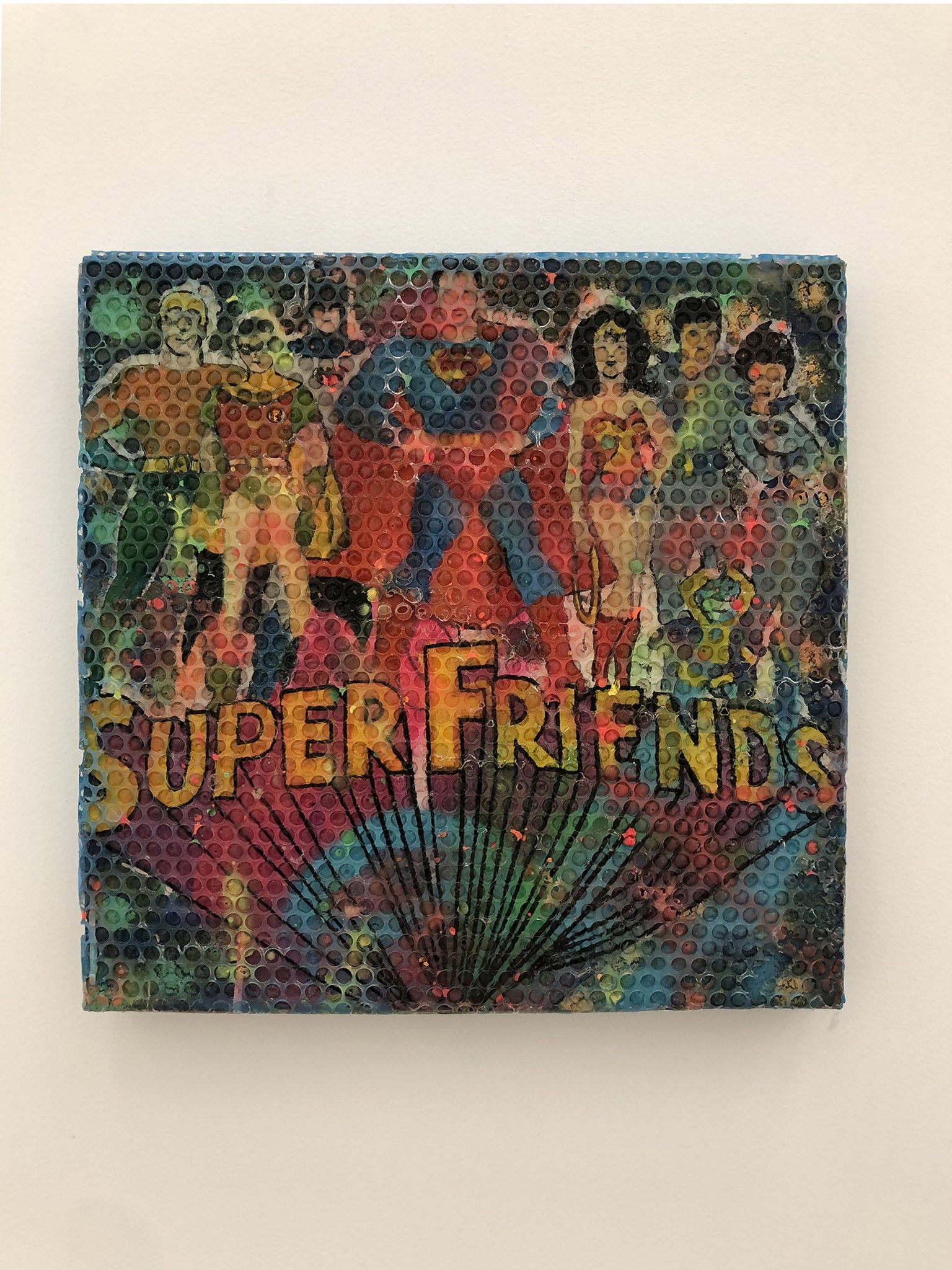 To close out the limping 2020, Tangerina Bruno exalts the merry mainstream holiday in Dezembros (a play on the Portuguese word, with an admittedly wrong pluralized December), which celebrates a fourteen-year work-in-progress installation of a cozy old artificial Christmas tree now the center stage of the Secret Santa exhibition at Kogan Amaro. 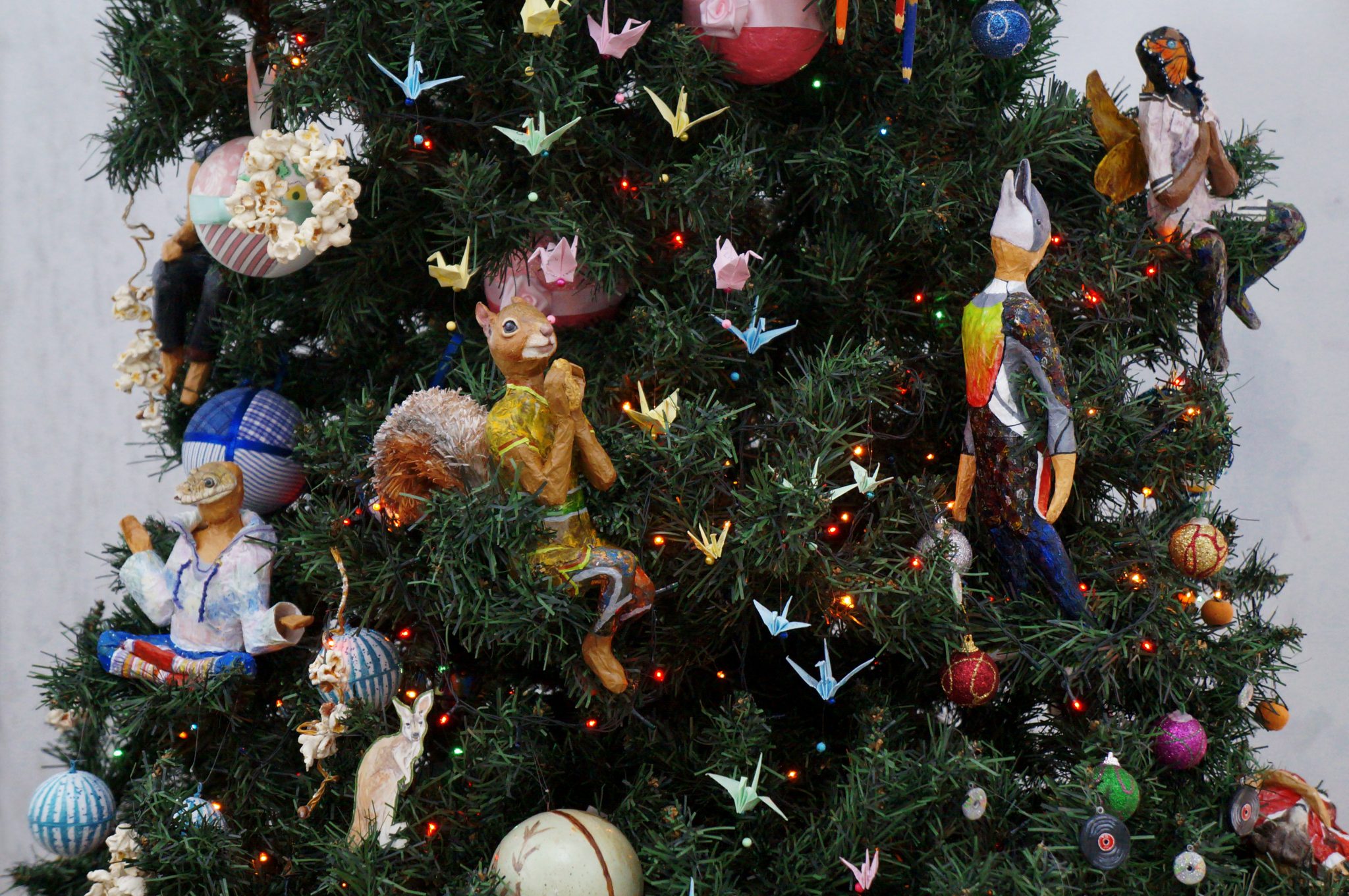 Tangerina Bruno, what is the difference between your family Christmas tree and the Dezembros installation?

None. It’s the exact same old artificial family Christmas tree we’ve had since 2006. In the gallery it is staged at the center of the exhibition room while at home our tree is always placed in the living-room corner due to lack of space. At home the Christmas baubles dangle only on the tree’s exposed side but in the gallery it is seen in 360 degrees so for the first time we gave an ornamental treatment all over its coniferous conic shape.

Does the installation reference the trees burned in the wildfires in the Pantanal and Amazon regions or in California?

Our tree symbolizes beauty, it exudes a playful spirit with symbolic elements of masked animals with human bodies. These elements dangle in an artificial tree system that tells our story as it reflects on the world around us. 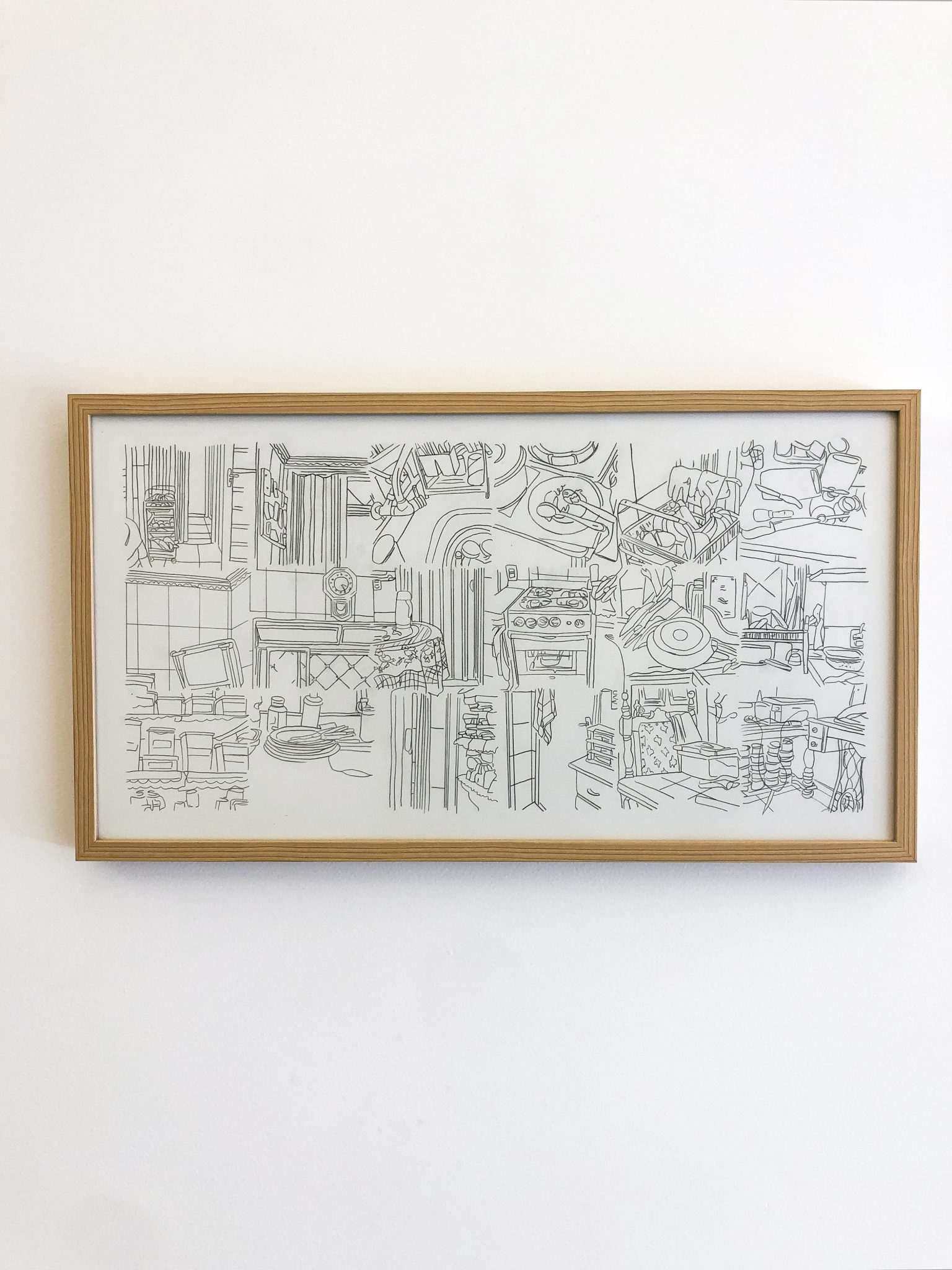 Does it discuss consumerism? Does it tackle sustainability?

When we attribute meaning to something we are automatically bonded by respect to whatever we expend energy, time and care. Awareness and sustainability are pillars of our lives and our work. Our tree discusses all these issues and is involved with profound respect. It is a cry to respect and preserve Nature, the forest and the trees. The leitmotif of our tree is love. 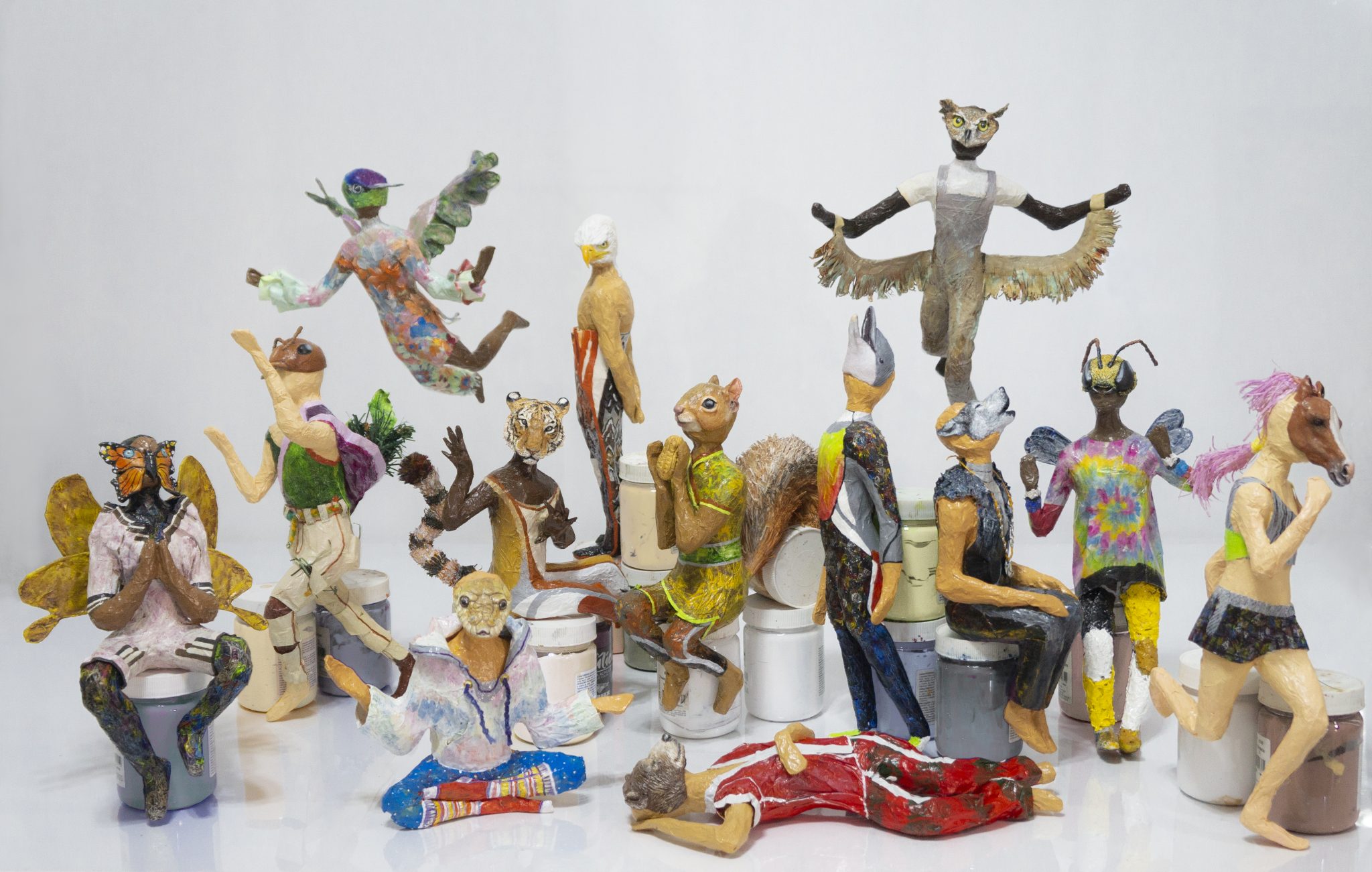 We were twenty-seven on December 1, and since we were twelve we’ve had fun crafting the Christmas tree ornaments ourselves in the techniques of papier-maché and cold porcelain. The tree maps our own evolution through its ornaments. It represents our personal journey through things that are on our mind and things we wish for. To work these issues through the ornaments has always been a challenging experience. 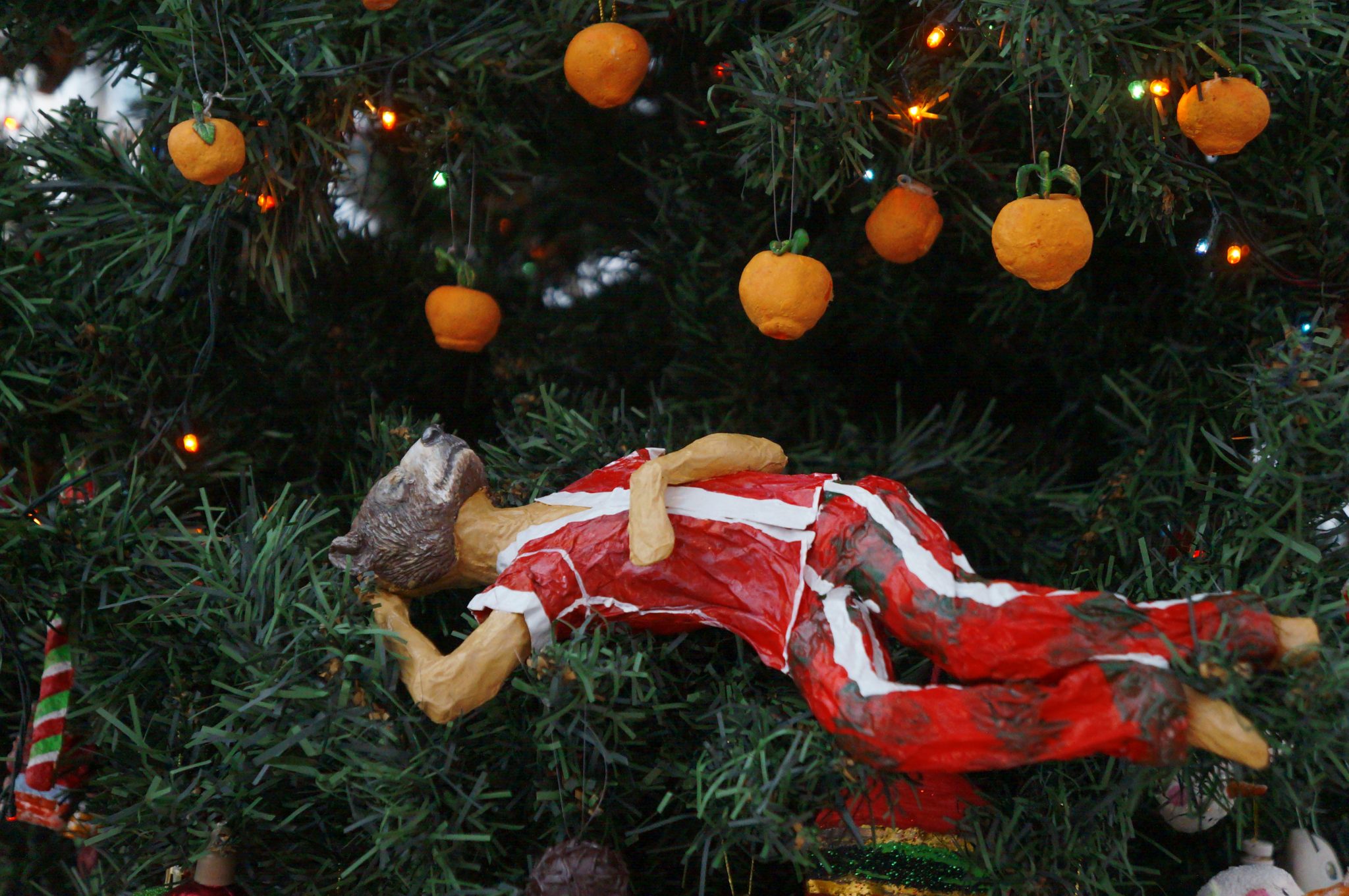 Tell us about the statuettes.

We created thirteen small deities sculpted in papier maché and cold porcelain that represent animal archetypes. These small sculptures are based on the articulated wooden mannequins used in art class, they are approximately twenty-five centimeters tall. All of them have human bodies topped with animal masked-faces of the hummingbird, the owl, the eagle, the ant, the dolphin, the snake, etc. They represent deities of a secret story that has been in our minds for a while.

Do they have names?

Their names play with the incorrect and opposite genre of the animals in the Portuguese language. So the squirrel, esquilo in Portuguese, is our Esquila—the female genre doesn’t exist for squirrels in the Portuguese language. The butterfly, borboleta, we inverted for the masculine Borboleto, which also doesn’t exist in correct grammar. Our inspiration for the Christmas balls came from a close friend who is able to see everything through a poetic light, even the pandemic. So we bought some old, romantic crockery and reproduced their decoration on three sets of Styrofoam balls.

How did the pandemic impact your Christmas installation?

It forced us to plan it in August instead of October when we customarily begin every year. After all this time, our tree has become shorter and asymmetric but that’s part of its story. It was originally three meters high but some branches have been lost or broken which is natural for a fourteen-year-old tree. So this year we decided to give it a revamp with a proper beauty salon care that included a complete hair extension treatment by braiding all the branches with wire. Our Christmas tree is a case of poetic license, it is still a little crooked but we love it despite that. Who isn’t a bit crooked after 2020? 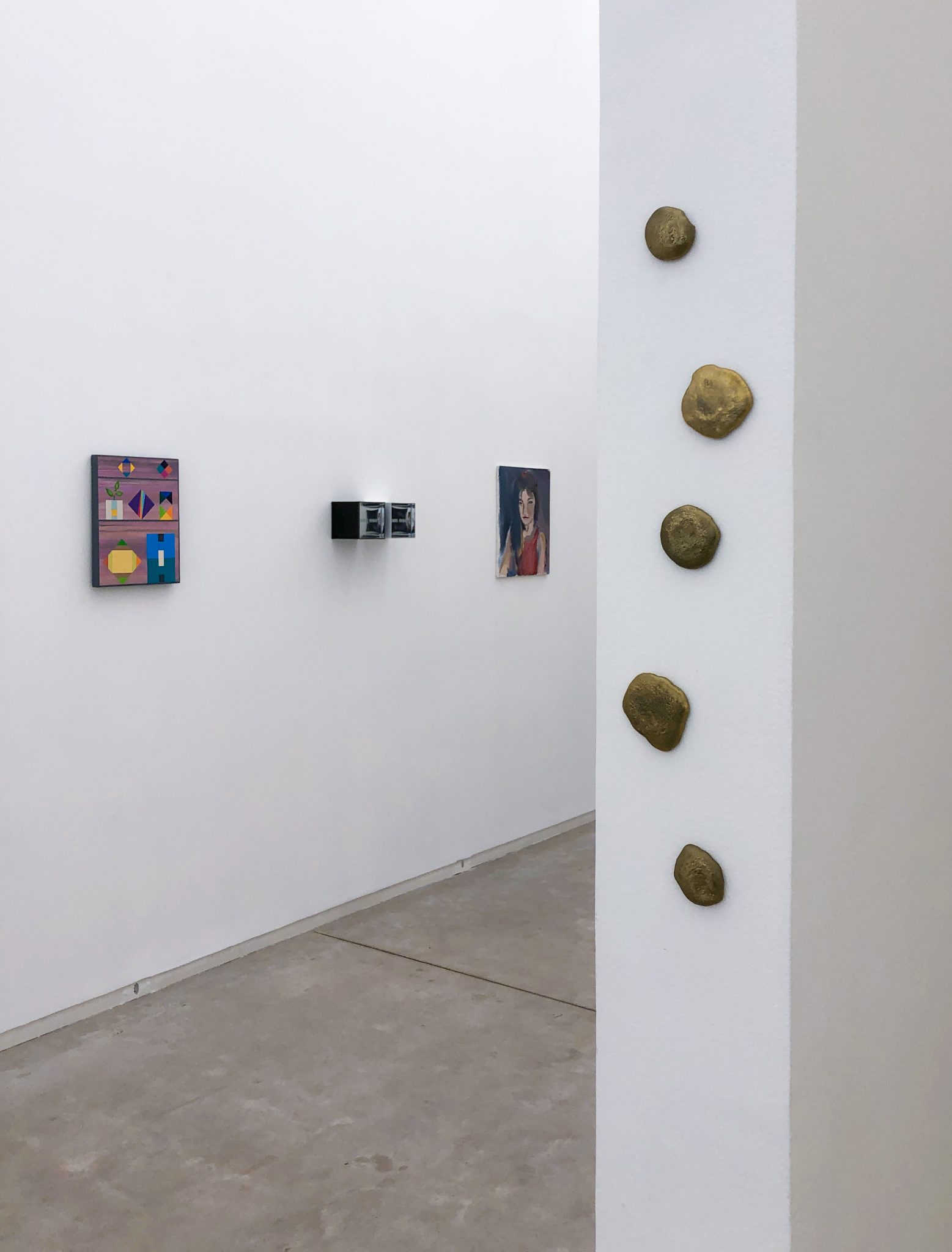 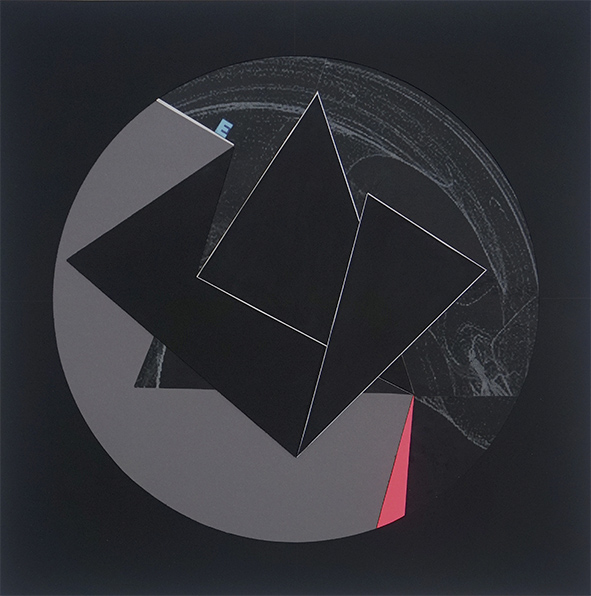 Artists donating 100% of proceeds of their works: