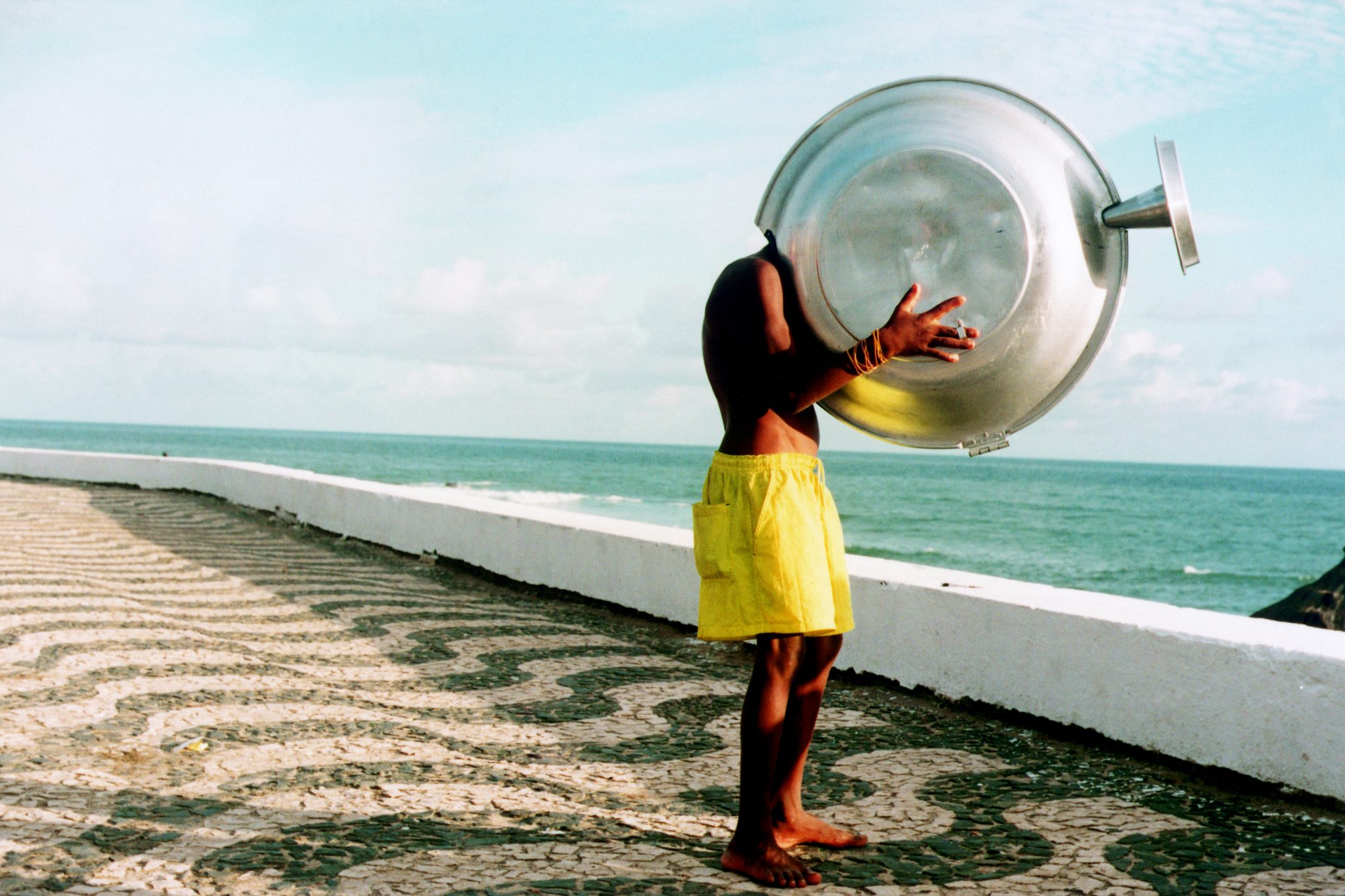 Thirty works by Marepe are on view in “Marepe: Estranhamente Comum” (Oddly Common), at Pina Estação museum. A perfect title for this solo exhibition, the largest the internationally acclaimed artist has had in São Paulo since he officially embraced the arts in 1990. The artist lives in his native town of Santo Antonio de Jesus in Bahia, yet his spontaneous conceptual poetics have universal appeal with common, everyday things brilliantly transformed into curious low-tech large or small-scale pieces and fun installations full of wit.

Some works are more like playthings, such as “Satélite Baldio” (Vacant Satellite), a giant sphere made of plastic buckets in the colors of the Brazilian flag. Others are surreal scapes like “Cânone” (Canon), a Magritte-like installation of black umbrellas “raining” from the sky. “Embutido” VII (Built-in XI), from the Aerial Architecture series, is a perfectly engineered geometric shape of a delicate bird cage that could easily be a project for a Star Wars spacecraft. There are experimental devices in sound, like the “Cabeça Acústica” (Acoustic Head), made of two plain large aluminum basins, recalling a musical instrument or a nautilus shell that you fit your head into to enjoy the sound of the wind. However, it is the simplest of all, the series of photos dubbed “Doce Céu de Santo Antonio” (Sweet Sky of Santo Antonio), where Marepe himself holds cotton candy up against a blue sky and plays with white fluffy clouds, which shows the sky is the limit for this guy’s imagination. Despite having always lived in the palm-fringed small town of Santo Antonio de Jesus where he was born forty-nine years ago, and depending on local artisans and specialized workers for the complex making of his pieces inspired on his native region’s customs and traditions, Marepe’s genius lies in his ability to think outside the crib while being nurtured by the hot spices and sweet coconut water of his beloved Bahian homeland.

Like most Bahia-state natives, his peculiar sense of humor and fervent Catholic faith do not stop him from playing esthetic pranks and sending cryptic messages through his oeuvre. In 2005, before his inaugural show at the Centre Pompidou in Paris, his first major solo exhibition abroad, a homophone—a word pronounced the same as another but differing in meaning and spelling—caught his ear and sparked his fertile imagination. The phonetic resonance of the cozy nickname of his dear granddad Bubu with Beaubourg, the area in which the Parisian museum stands, led him to create “Retrato de Bubu” (Portrait of Bubu, 2005). The quirky joke also involved a montage. Breaking class barriers and French protocol, grandfather Bubu was placed side by side with the museums’ official portrait of Georges Pompidou, the ex-president of France and founder of the renowned art institution. Not only that, but both portraits have exactly the same make of kinetic triptychs, which good-natured Marepe explains in the interview below.

In 1991, Marepe won the first prize in his inaugural exhibition that took him the following year to the Lateinamerika Woche in Germany. Since then his work has been widely viewed at galleries and institutions in Brazil as well as at the 2006 São Paulo Bienal. Marepe’s oeuvre has shown in Paris, Berlin, Bonn, Stuttgart, London, Lisbon, Turin, Milan, Istanbul, Barcelona, Monterrey, Sydney, Beijing and at the 2003 Venice Biennale, to name a few. In the U.S. his art has been displayed in New York, Minneapolis, Houston, Austin, Phoenix and Miami. His work is at international collections, namely the MoMA, New York; Tate Modern, London; Art Gallery of Ontario; Ellipse Foundation, Alcoitão, Portugal; and in Brazil at the MAM museum and the Pinacoteca do Estado, both in São Paulo, and at Minas state at Instituto Inhotim in Brumadinho. For around twenty years Marepe has been represented by São Paulo’s Galeria Luisa Strina. 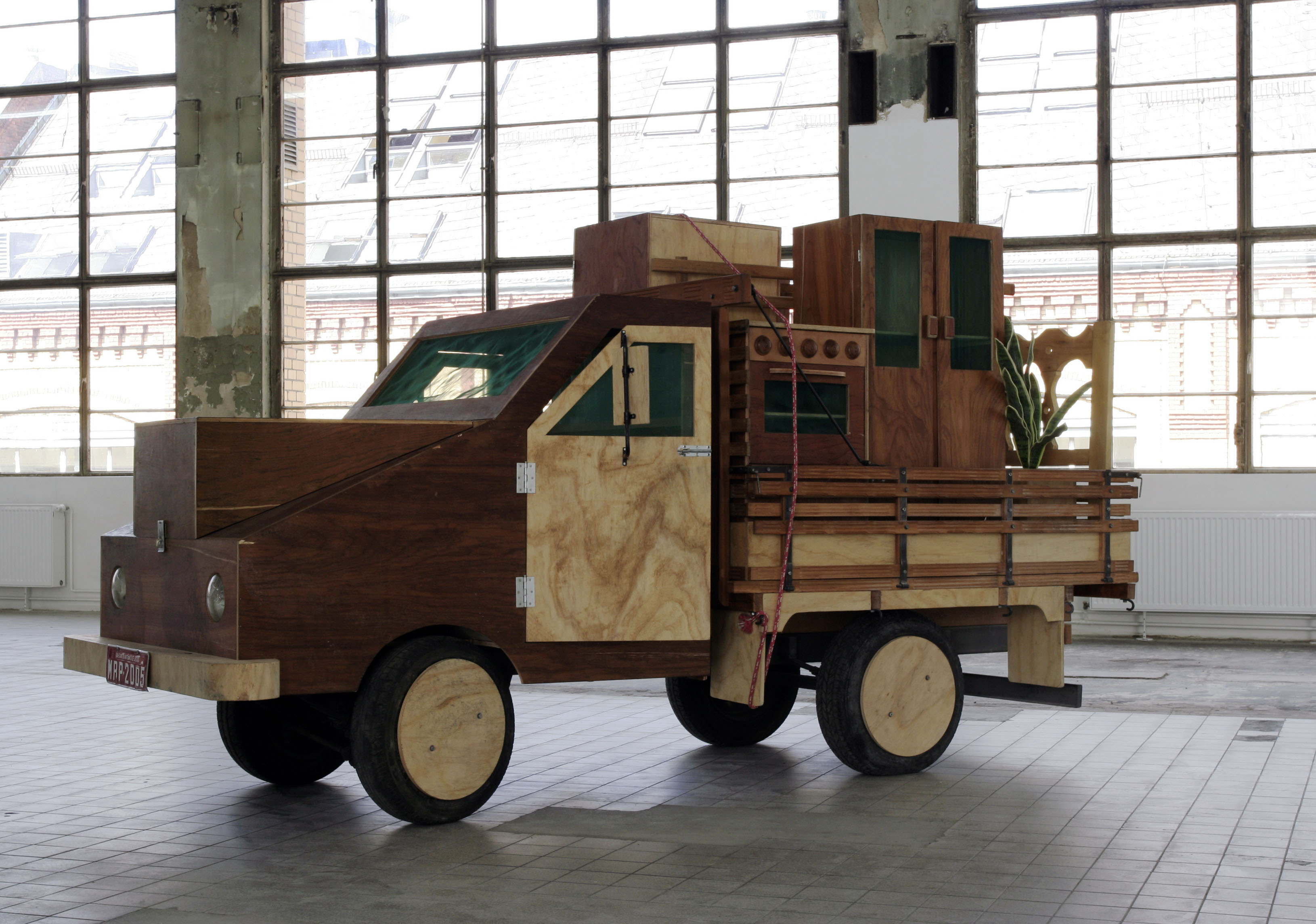 What impelled your creative vein? In an interview you mentioned your artistic drive came from necessity.

Yes, it comes from necessity, the fight for survival, and originates from a set of things. Since a kid I always felt like an artist and my life naturally led me to the arts.  I always drew, painted, worked with clay—art was always in my mind. My mother taught art so at home she talked about painting, drawing, the lives of famous artists, the myths of Brazilian folklore, and I helped her make ornamental banners for special occasions and religious processions. My father, on the other hand, worked in a hardware store so he introduced me to the tools and to materials like cement, paint, varnish, nails, ropes, aluminum basins, etc. I’m the result of the clash between my parents’ professional activities: my mom with her passion for the arts and my dad with his knowhow of building materials. 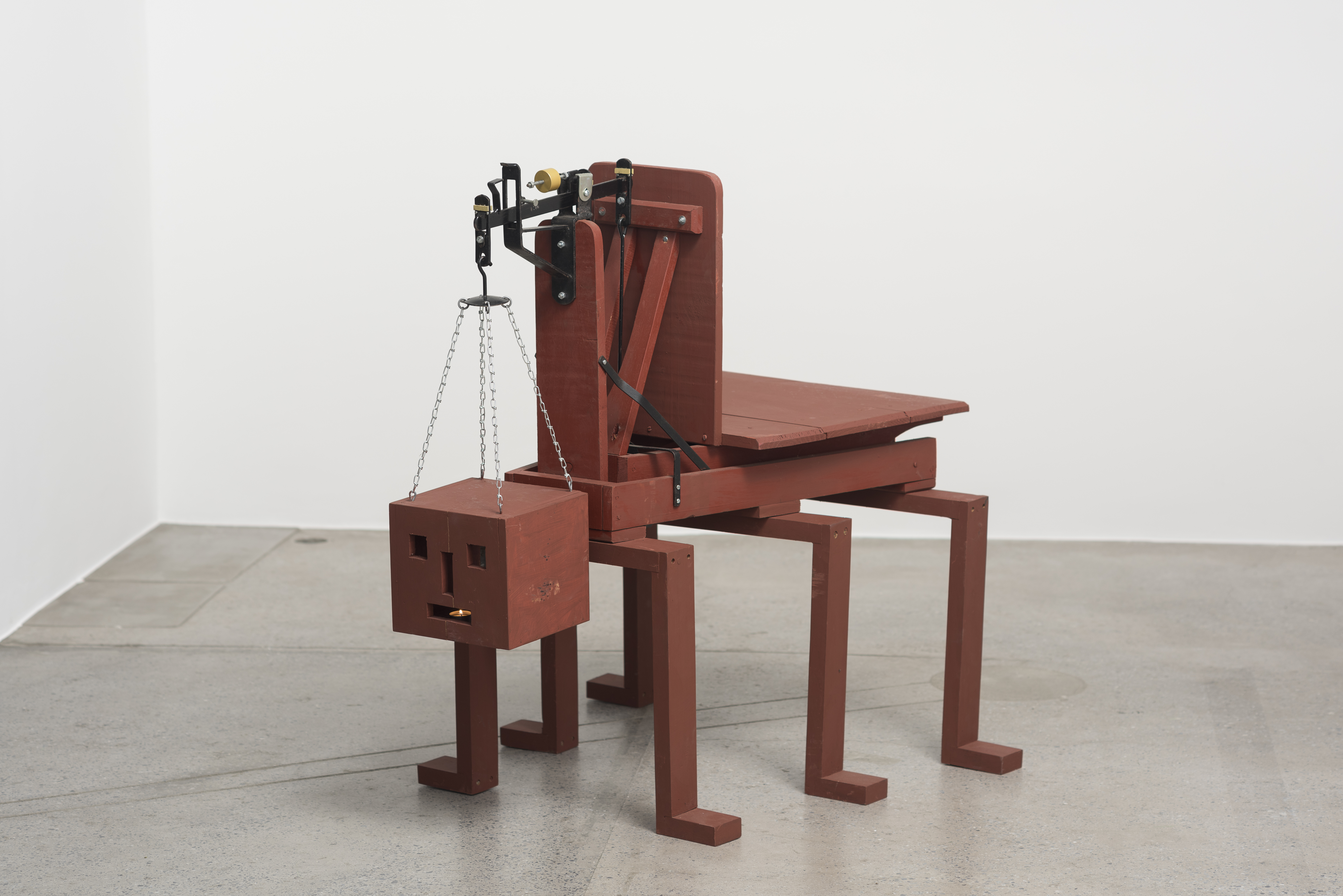 You still live in your small native town of Santo Antonio de Jesus in Bahia. Why?

I spent some time in Salvador (Bahia’s capital city) studying at the state university in the Fine Arts College. I had to quit due to the invitations to show my work around and the awards I won. When my dad died, it was time to go back home and take care of my mother. I was very lucky that during the same time, gallerist Luisa Strina invited me to become one of her artists. The invitation provided me the means to live in Santo Antonio for the last twenty years working with her gallery all this time. So I’m pleased to say I’m very happy how my life finally turned out. 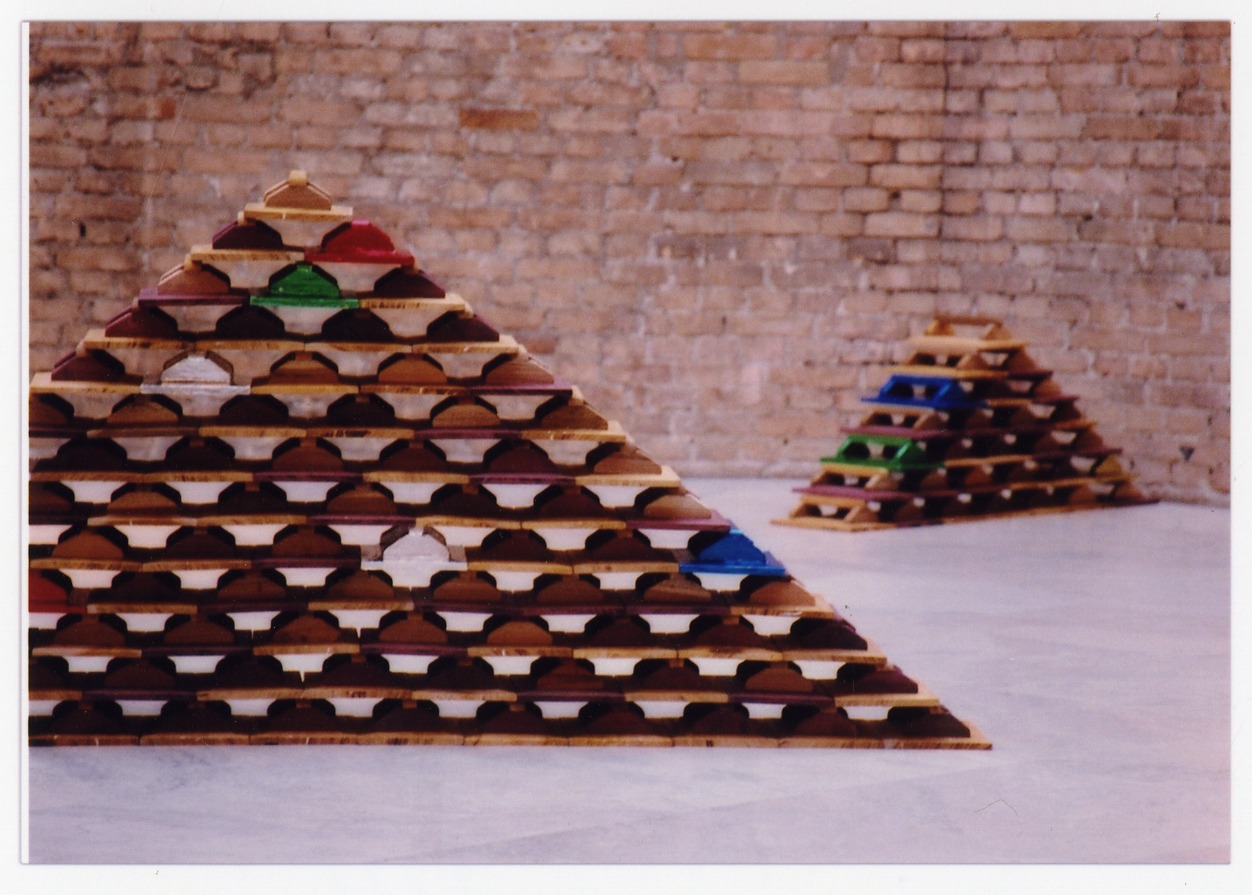 You have your studio in Santo Antonio de Jesus but do you keep another studio elsewhere?

My work is all produced in Santo Antonio de Jesus, where I have my studio and people to help me produce my work: carpenters, metalworkers and other specialized workers. I create and draw the plans, then they are produced by the professionals from my hometown. 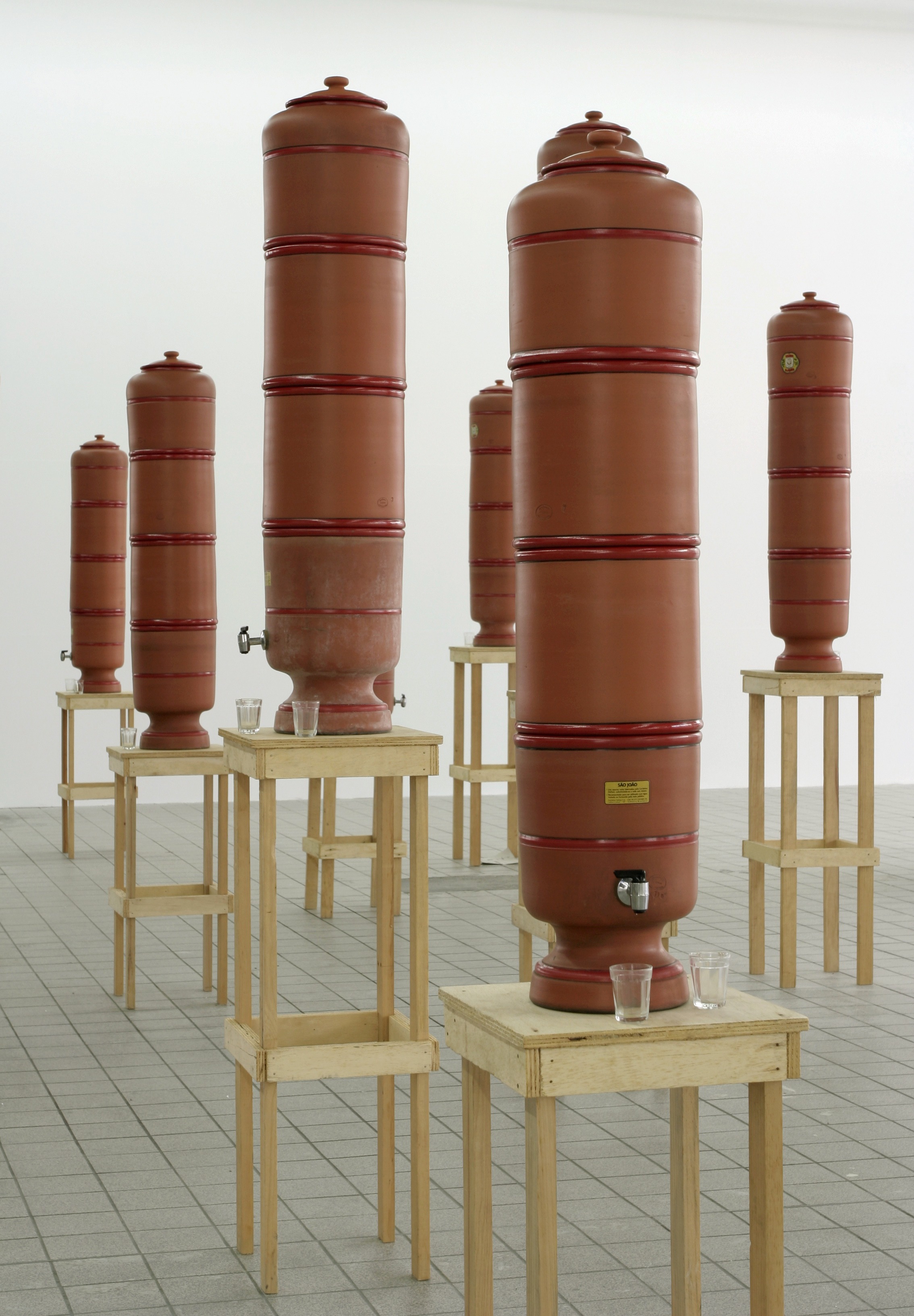 You must be quite famous in your hometown. Has the city made you honorary citizen?

(LOL) No, but everyone knows who I am. With God’s grace, I’m very well-liked there.  Everyone knows I’m an artist and they are very keen about my career since there is a lot on my work on the Internet. Local schools always have projects about my work, students come to visit my studio. They are very proud of my work. 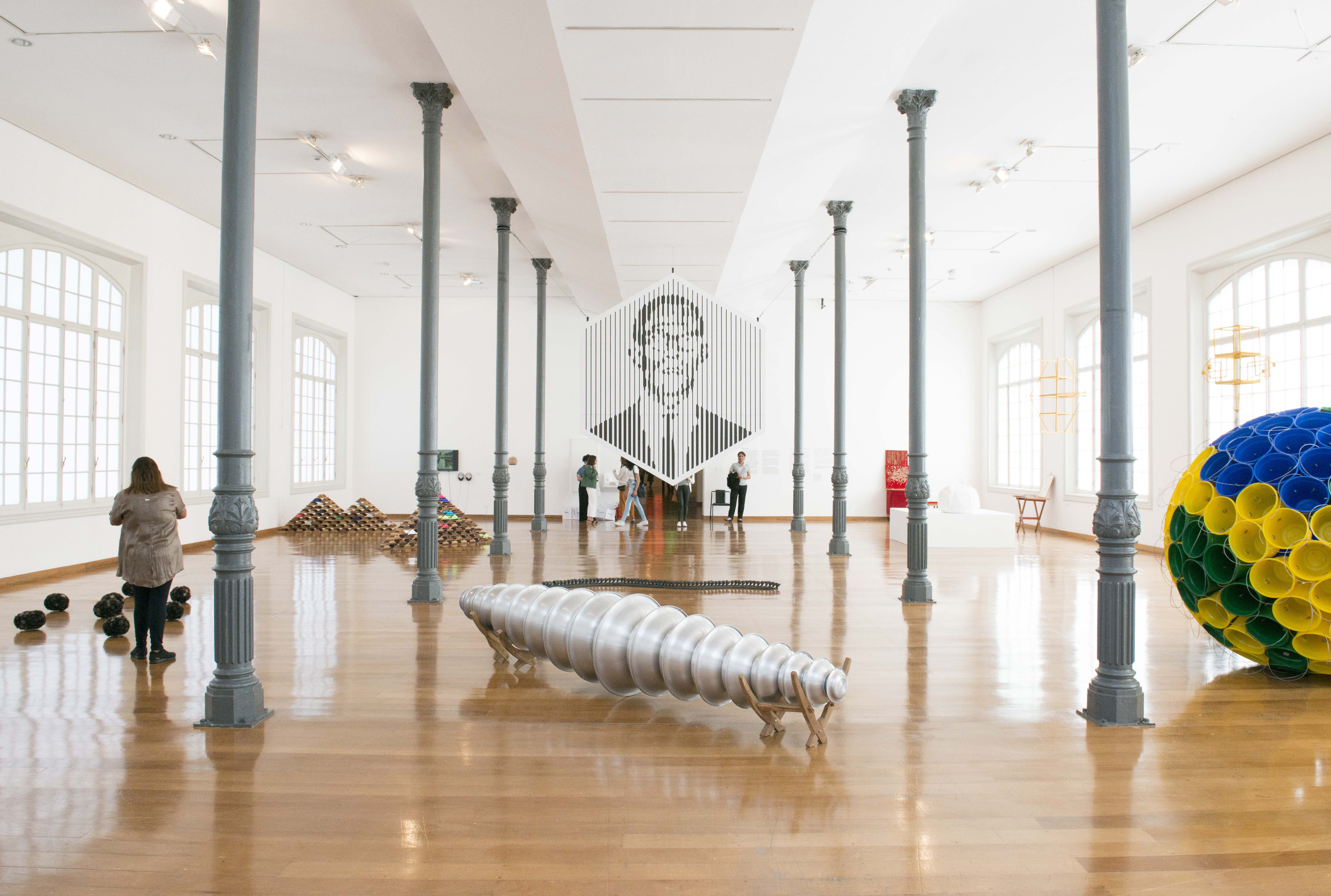 Partial view of “Marepe, Oddly Common” with the triptych Portrait of Bubu (2005) at the center of the exhibition room. Courtesy Pina Estação.

Have you ever been asked to create a public work for your hometown?

I have done some restoration works here and there, and have embellished local architecture. In 2002, when Brazil won its fifth world soccer championship, I was asked to create a small monument for soccer champ Júnior, who was also born and raised in my town. My most recent restoration work in my hometown was the angels of the church of Saint Benedict, which were in quite a bad state. Whenever I’m invited I’m pleased to help. 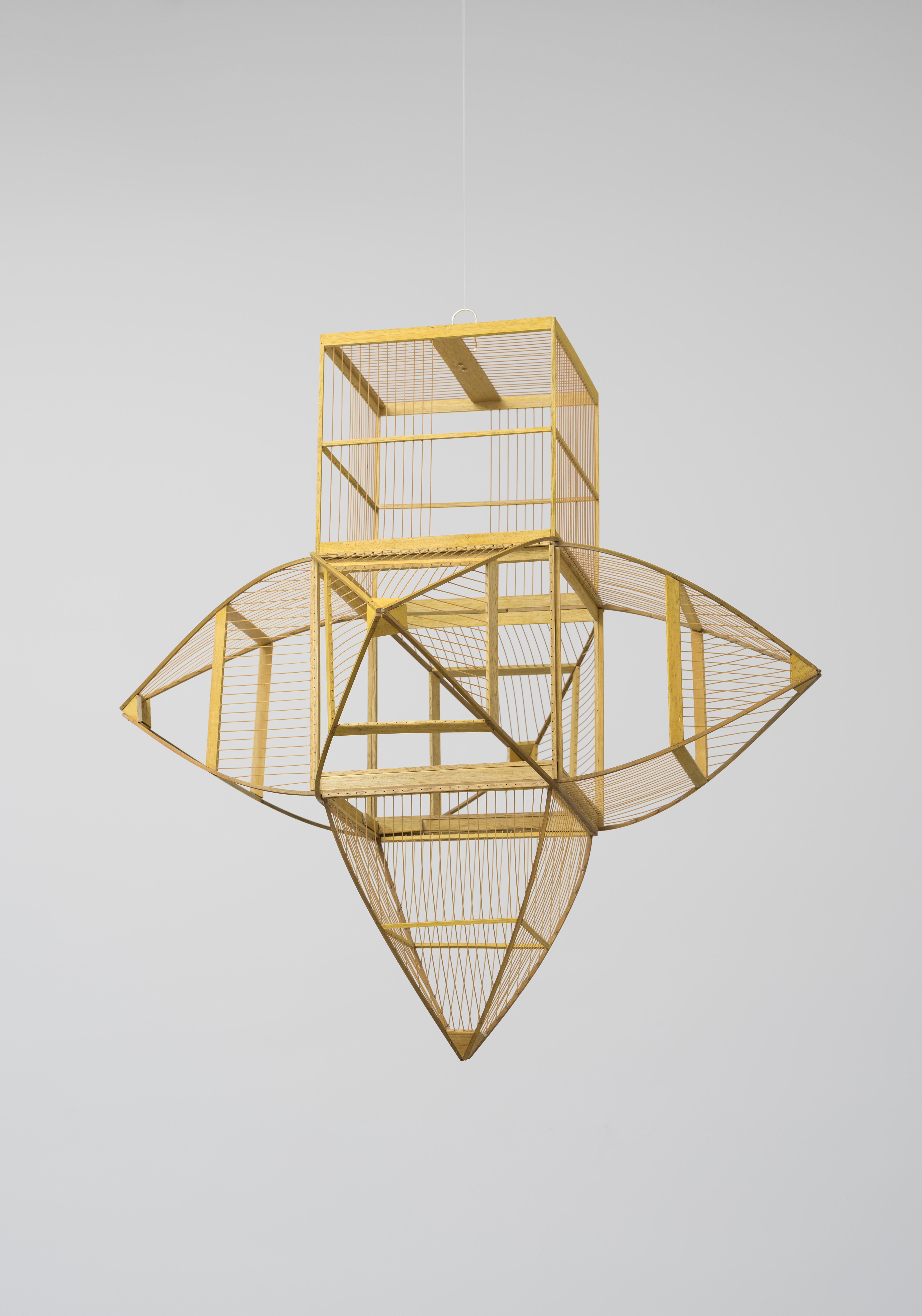 How do you see the importance of your native town in your work transforming simple, banal objects into conceptual art?

Santo Antonio de Jesus is vital for me, it is why I’m able to do what I do. Even when I lived in Salvador during college, all my work was produced in my hometown. I buy all material in the local stores, engage local professionals to execute the services I need and the local transport company delivers my work to directly to Luisa Strina in São Paulo in two-days time, to my main art installer. Everything I do comes from Santo Antonio de Jesus. 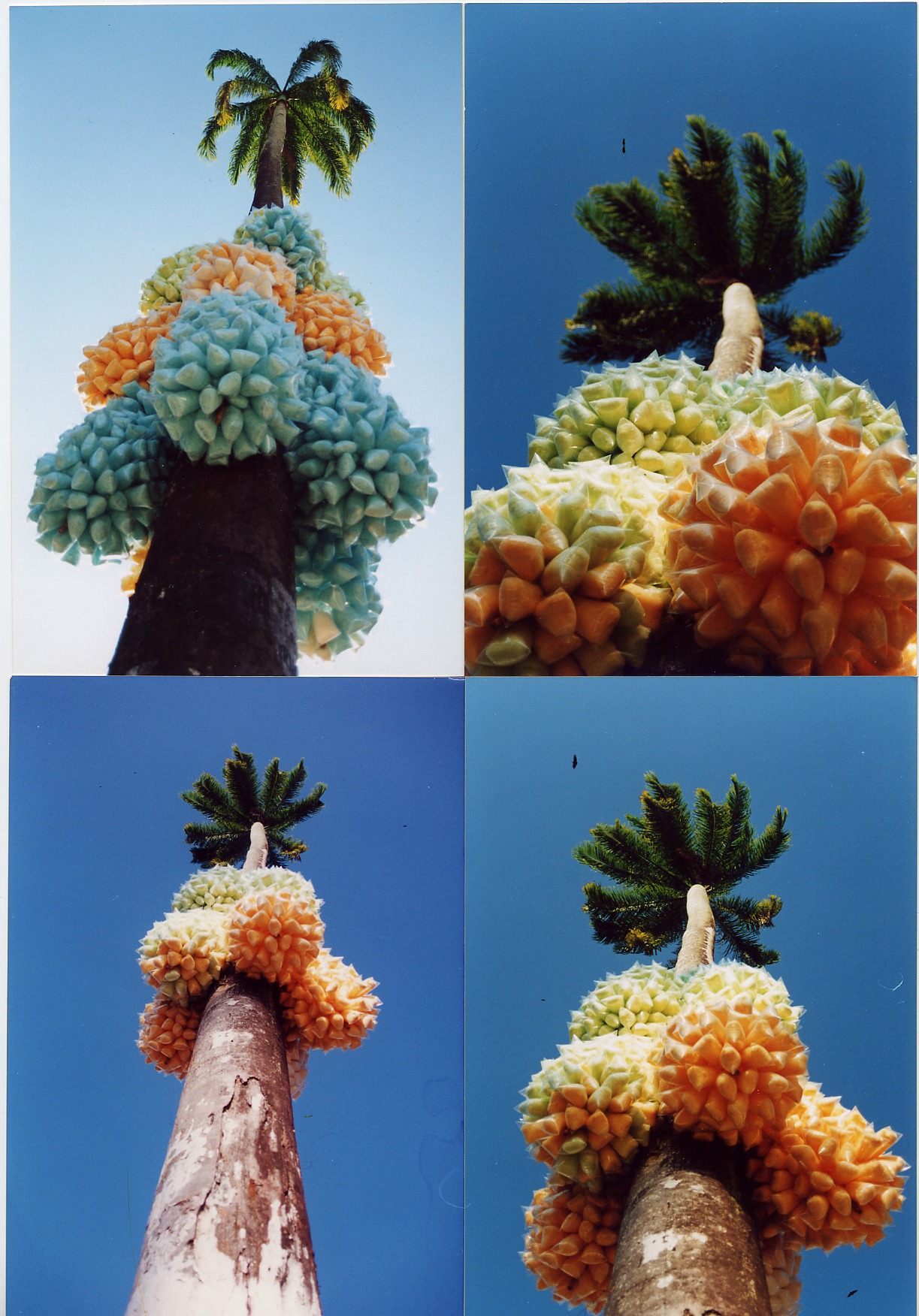 In 2005, in your first solo exhibition in Paris, at the Centre Pompidou, also known as the Beaubourg, you had the portrait of your grandfather Bubu installed right next to France’s president Pompidou and founder of one of the world’s most important art museums. How was that?

It was my first experience in an important art institution abroad and it was wonderful from beginning to end. It began when I learned the name of the museum was Beaubourg. The sound reminded me of my granddad’s name, Bubu, so I decided to make a joke and put them side-by-side. The museum’s official portrait of president Georges Pompidou was by Vasarely so I contacted the artist’s studio, which since his death is managed by his family, and asked to replicate my grandfather’s portrait in exactly the same technique. For the same exhibition I also made a giant baby walker, Andador (2005), over two-and-a-half meters high, because at that stage in that grandiose environment I felt like a big baby taking my first steps.

I remember that exhibition, specially the baby walker (Andador, 2005) but it’s not at the Pina Estação retrospective, where is it now? 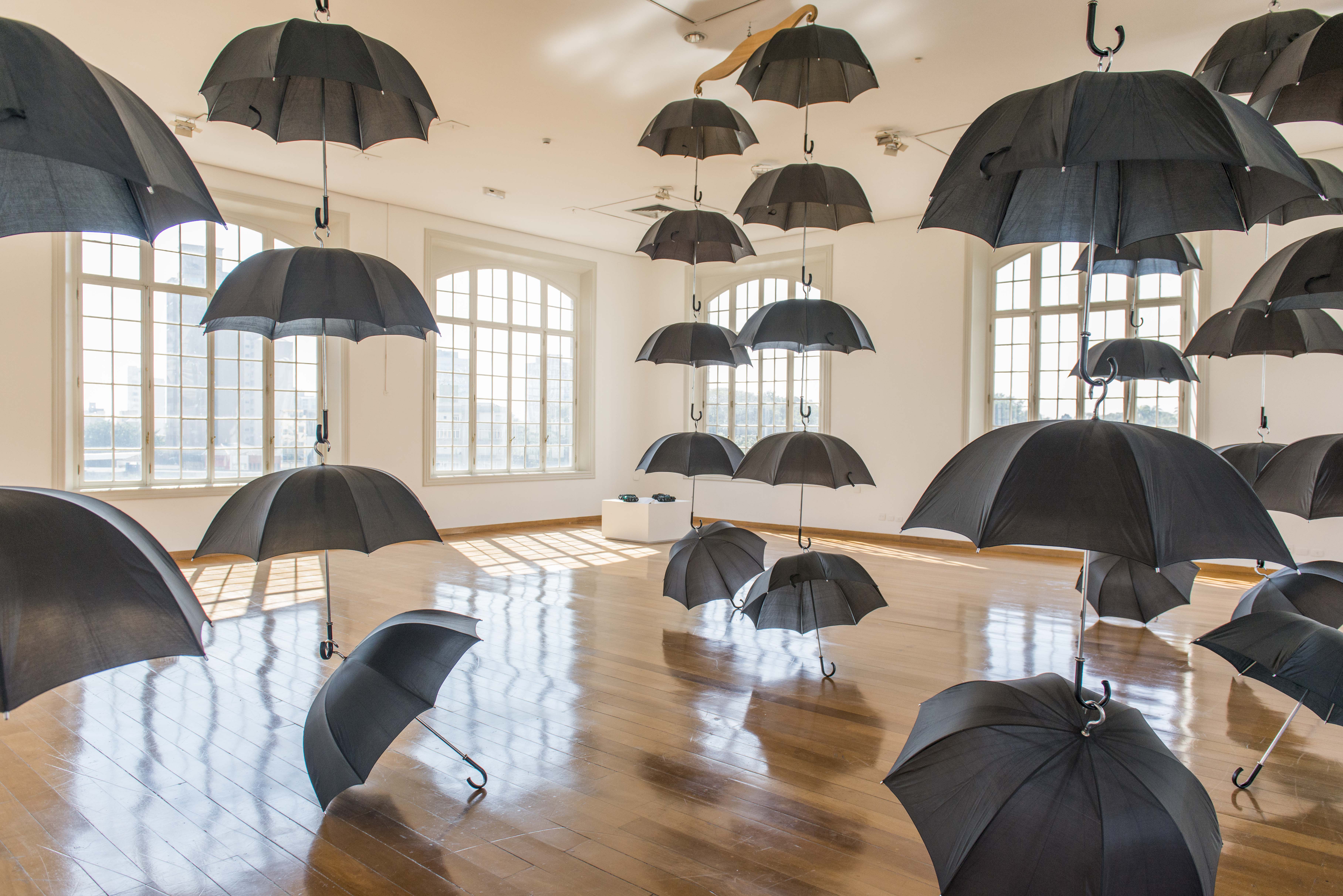 Now tell us who do you admire in the arts.

So many people! I love our modernist movement, Tarsila do Amaral, Di Cavalcanti, Anita Malfatti, Brecheret, who is one of the reasons I feel so at home in São Paulo, because there are so many of his wonderful sculptures around town. There are contemporary artists I admire but I won’t drop their names, the list is too long. From Rio, I love Lygia Clark and Helio Oiticica, who was a crucial inspiration for my work’s development. Of course, there is Duchamp and Magritte, also.  From the European school I also love Picasso, the Impressionists, Van Gogh, Renoir and specialist the Dadaist artists—they have a lot to do with my work. 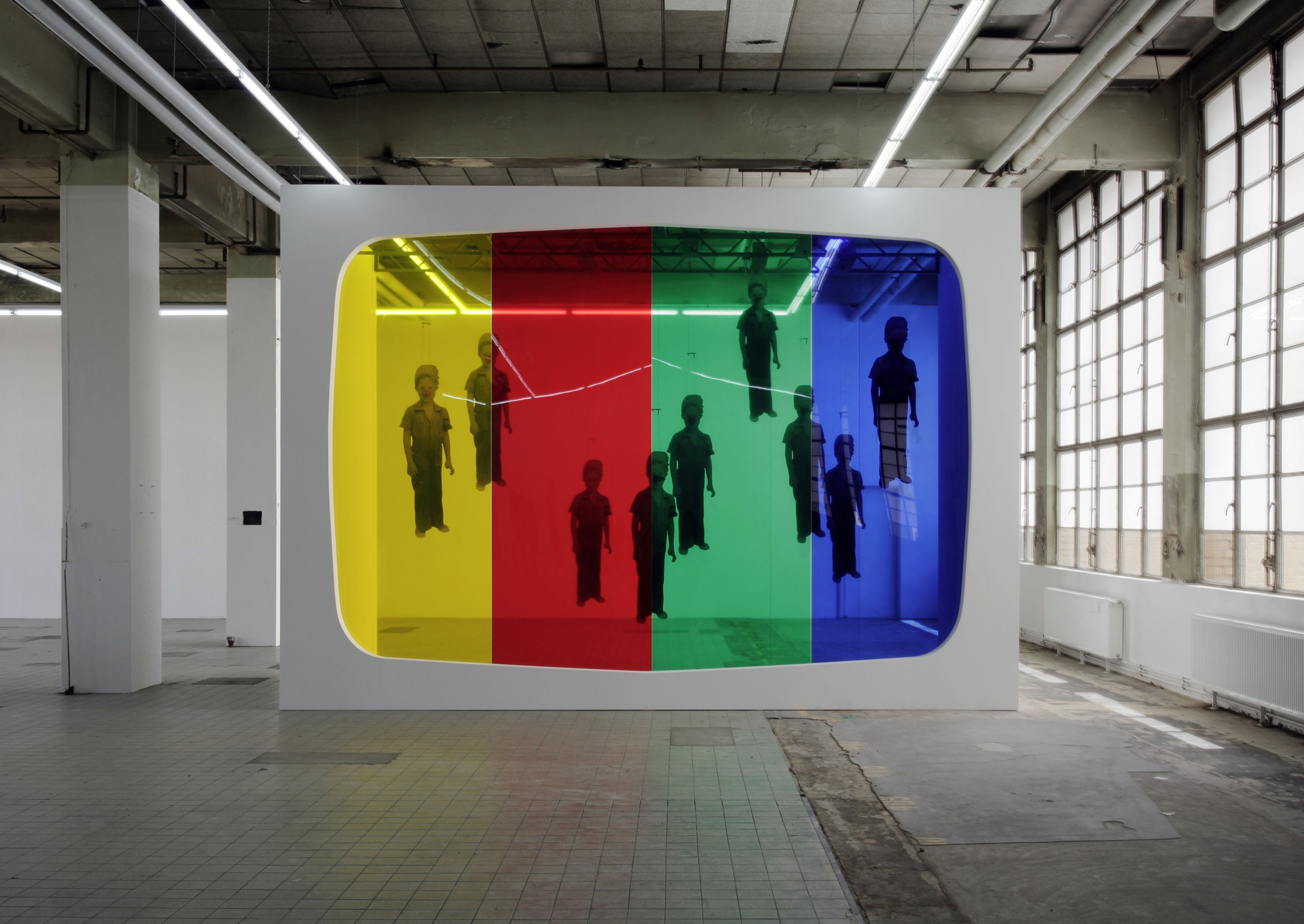 What is the advice you give to a young person, like you once were, who is a born-artist in deep Brazil?

Trust yourself and trust others. I always trusted those around me guiding my career. I also believe it is important to enroll in an art school. It is OK to be self-taught, but to learn from good teachers is a priceless. 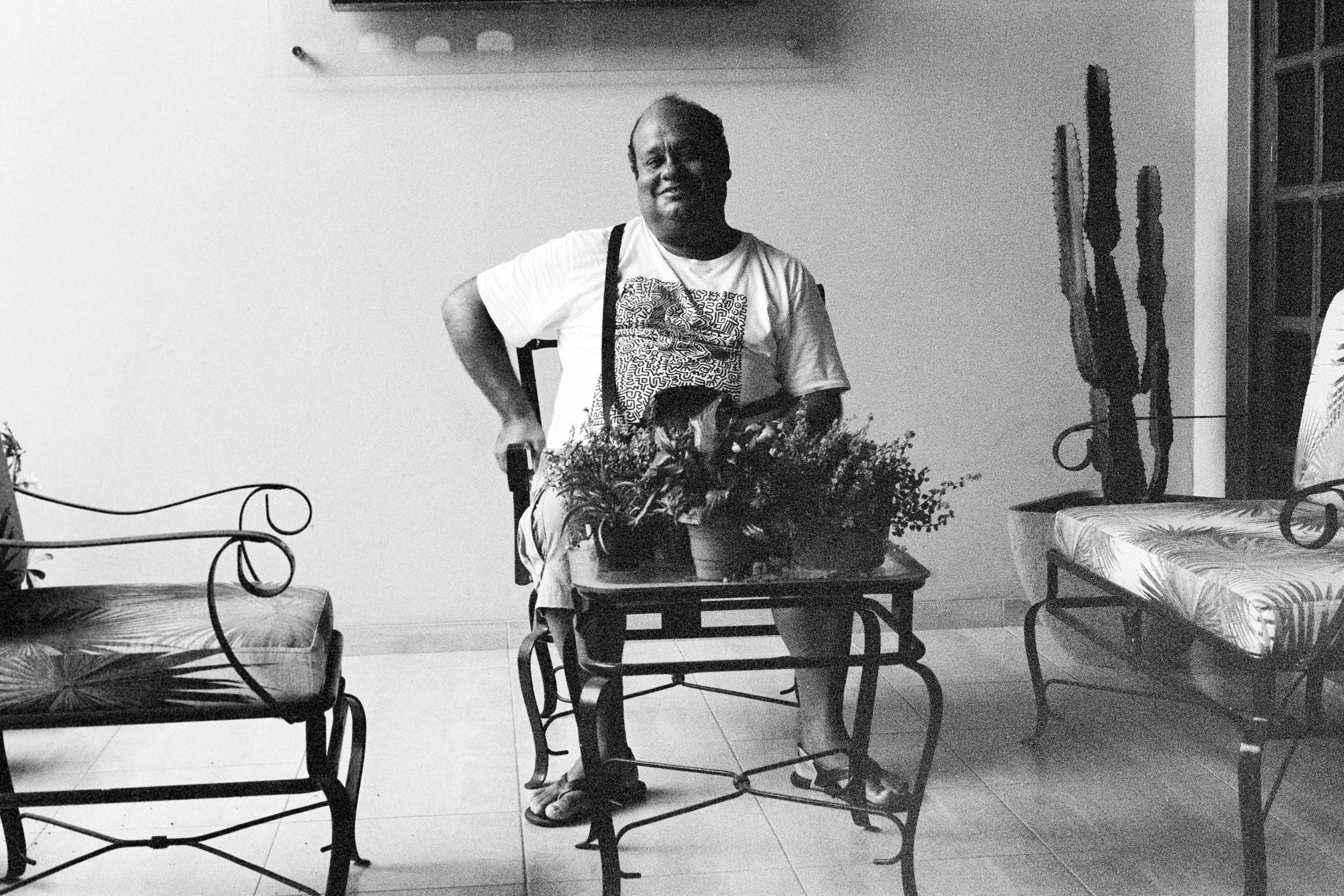 Marepe at the veranda of his home at Santo Antonio de Jesus, Bahia.