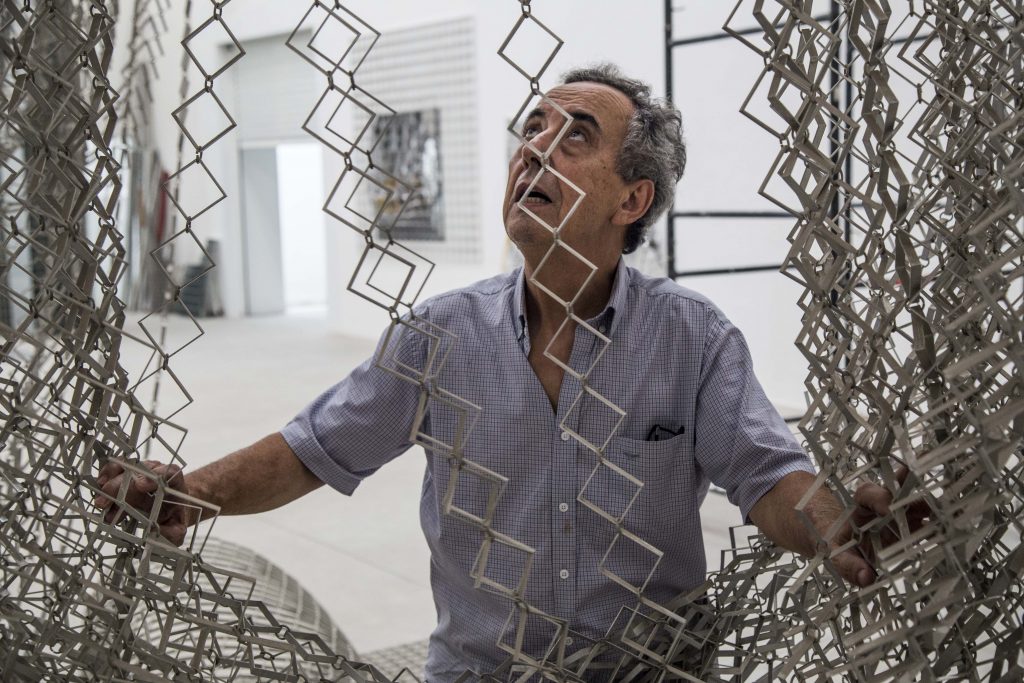 An artist doesn’t form only when he first makes contact with an artistic universe. An artist, when he begins to become an artist, collects memories, episodes that for many would go unnoticed, but that impregnate them with a vital force, and mixes references that do not necessarily belong to the world of art.

For Ascânio MMM, this encounter began by trying to pull these elements aside to bring forth the delicious broth that impels them to create works of art.

It is an optimal time to enter the world of Ascânio MMM, as the artist has an exhibition opening September 28 at Casa Triângulo gallery in São Paulo. Curated by Guilherme Wisnik, the exhibition, “Prism and Quacors,” consists of new spatial sculptures that combine pyramidal topology with more open, abstract forms. 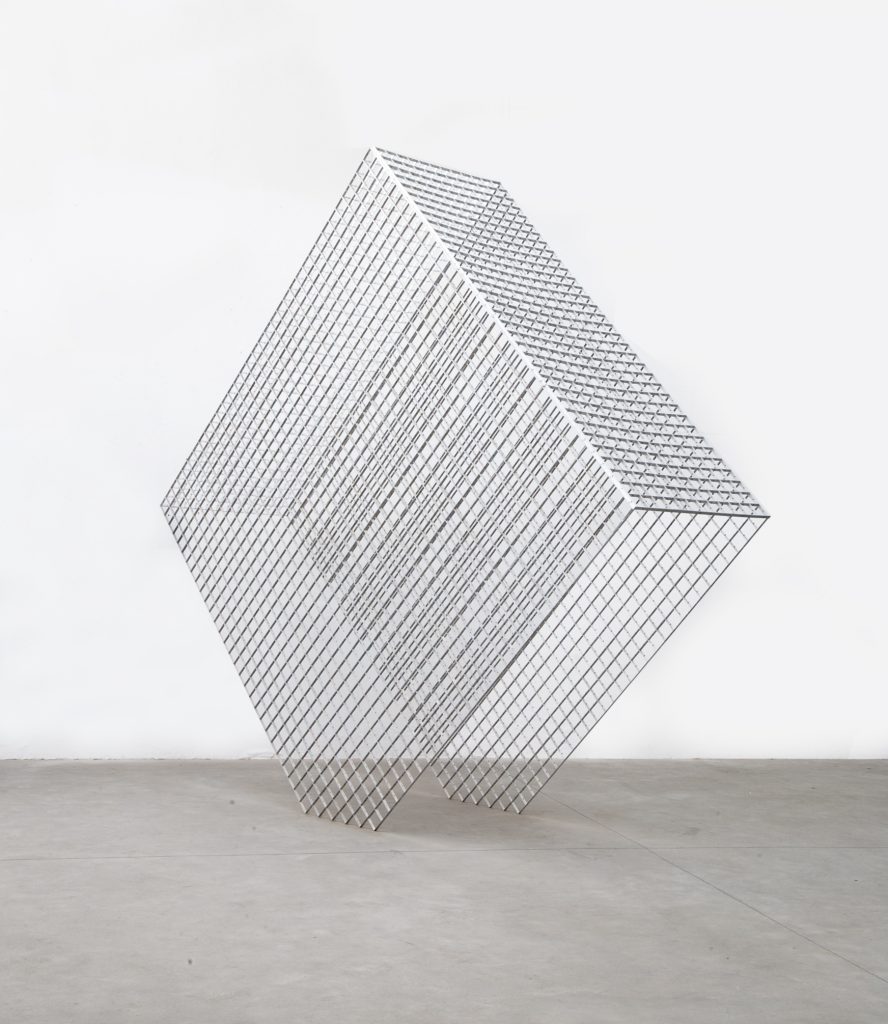 Two years ago, I had the pleasure of interviewing the Rio de Janeiro-based artist in his studio. Ascânio Maria Martins Monteiro was born in 1941 in Fão, a village of just over 3,000 inhabitants on the northern coast of Portugal. Details from his birthplace appear in his work: the white of the village houses, the influence of a certain industrial character from the naval yards, the rupture with the conservatism of the bourgeoisie and the Catholic Church after the readings of Eça de Queiróz, the construction of cribs, the appreciation for the handling of tools (as a result of playing, as a child, in a small joinery of his uncle’s). The most important detail  is the artist’s first encounter with the modern space at the age of ten—from which, as an epiphany, he decided to become an architect. It occurred after being taken by the family’s laundress to one of the village’s summer houses, built in the Portuguese modernist architecture of the 1950s and totally different from the architectural landscape of the place that Ascânio was accustomed to, living as he didin a semi-detached house. It had a room full of old portraits that, according to him, was like being “transported directly to the cemetery.”

There are, in this brief summary, the fundamental characteristics that are the meeting of two distinct formations—that of architect and sculptor, having studied at FAU-UFRJ (where he enrolled in 1965) and at the National School of Fine Arts (in 1963/1964), that trace the course of this seminal artist of Brazilian constructivism.

There are, in such a dense work, elements that I consider crucial for critical thinking about art. And it’s with them that I begin. 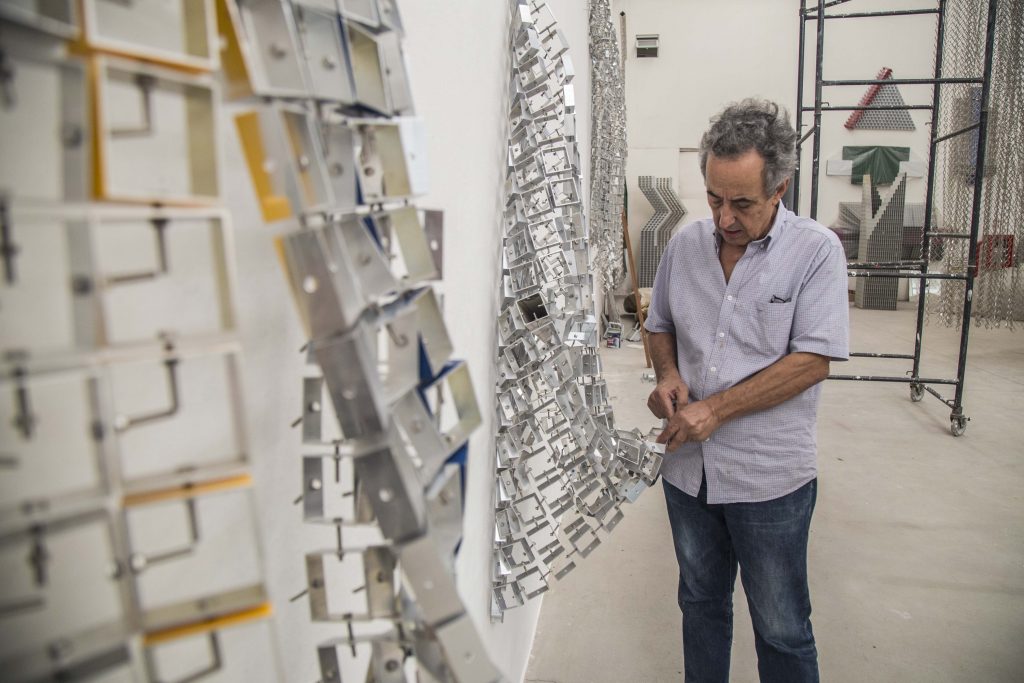 The first is the harmony highlighted by various theorists between artistic intuition and the use of mathematics: the expressions “poetics of reason” (Paulo Herkenfoff) and “poetry of calculation” (Paulo Miyada), precise descriptions of Ascânio’s work. Ascânio told me that this dual formation provided the encounter with two spheres supposedly separated by an abyss, making them become neighbors.

In the sensitive materiality of Ascânio’s work, there is a secret encounter between the rigidity of geometrical calculus and scientific coldness, with the subtlety of forms and sculptural beauty. A visit to the artist’s studio shows this clearly. It is interesting to note how his works of art are born of mathematical formulas and also how it is possible from the formula to find the work again, to construct it according to mathematical equations. At the interview, he showed me his projects and it became clear: the art of the work is not limited to this, there is a leap in art. And this leap is what allows the work to resist being exhausted in the formulas.

Another fundamental perspective defended by Ascanio is the daily conflict with the material inside the studio. For the artist, making a work is knowing how to do it. From the conception of the project to the effective realization of it, it is the artist who is present in all the stages. It is interesting to recall how the original meaning of the word art is related to this posture. In Greek, art is téchne, a word that can also be translated to technique. Although there is no time to deal with this historical issue, we can remember how artistic creation was not disassociated from its doing, as there was no autonomy of art in front of other productive activities. What is exchanged in the work of Ascânio, marked by the artist’s encounter with architecture, is a fact that allows us to affirm that more than dispute: art has a deep affinity with other fields.

This struggle with the materials also serves to definitively refuse the formalist label for the artist, as he strictly affirms, since there is no primacy of form over other elements. He qualifies his own work for maintaining a horizontal structure between the development of the first sketches and the final realization. The artist says the work is already born in the project itself. Although he counts on a group of auxiliaries, due to the monumental character of his sculptures, it is he who puts himself daily in the routine of the studio, a large shed that counts as an office, a section of documentation and an ample atelier.

Despite the geometrical rigidity evident in his work, the artist emphasis that being open to the unexpected is something very significant to his praxis. Between the project idea and what is presented as a final creation, things happen that were not foreseen.

At the end of the 1960s, the participation of the spectator became in vogue in international and Brazilian art. Ascânio had contact with the latter via a whole generation who explored this issue, from Lygia Clark’s “Bichos” to Hélio Oiticica’s “Parangolé.” In the artist’s work, there is a double way of understanding the relation between spectator and work.

The first is the fact that many of his sculptures are in public places. That is, it is not necessary that a spectator moves to a space destined under works of art to see a piece, since it is in the fabric of the city. This is not a feature at all in the discussion of the elitism that always orbited the field of plastic arts.

Another point, aligned with the proposals of the above-mentioned artists, is the spectator’s own intervention in the work itself, as is the case of the “Boxes,” created purposely to be manipulated, and some works of Ascânio’s last phase with his experimentation with aluminum, called “flexos,” “qualas” and “quasos.” With these, some of which are on view in his new exhibition, an interaction is possible, as the artist himself shows when manipulating the aluminum chains that hang from the ceiling of his studio.

Ascânio began his work with wood, a material he used for many years in a variety of  ways. In recent times, he began his research of aluminum. It is with this material that, in my opinion, his work can be thought of both aesthetically and politically.

When constructing his sculptures with this material, joined by a series of links and connections, Ascânio makes a gesture of leaving the screws loose, making the sculpture become malleable. This minimal action, which in other fields would be seen as a failure—in architecture a loose screw is a defect—it brings out all the political power of art. I told him that according to the Italian philosopher Giorgio Agamben, art proposes a new use, a break in the teleological sense of means and ends and he totally agreed.

We can allude to this rupture in the operability of things as another way of relating to the world. Art then becomes a pure gesture that turns against the effectiveness and attributions of everyday objects. The inaugural step given by Duchamp, when transforming a simple urinal into a work of art, reverberates in practices that are shown as a displacement of the utilitarian function of the objects of life. By releasing a bolt, disengaging its obligation to be fixed, the artist grants it a new use, realizing the political vocation of art, that is, to deactivate the productive devices that are captured more and more at the height of late capitalism. 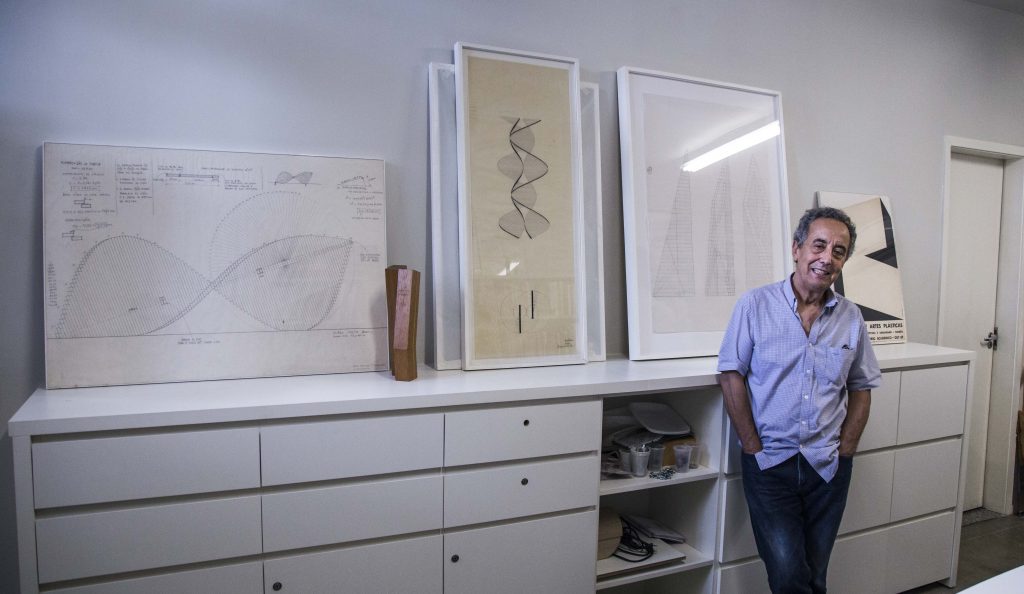 Although the word deactivation carries a pejorative meaning, that is not what it is about here. Deactivating something, breaking the teleological meaning that guide artistic practices, is a form of activation of occult powers that come to the surface to invent new directions, to provoke tension and to sharpen new senses.

Perhaps the work of the artist can be equated with that of a child who plays, remembering what was for him a fundamental moment of his training, transforming hardware stores and workshops into amusement parks, handling tools as toys.

This is because there is a deactivation of the usual sense of what is arranged in the world. This is because art, like a game, makes us inhabit a kind of resistance in accepting only the world with its prescribed and determined functions. This may be Ascanio’s new move, this risky throwing of dice into the unforeseen.