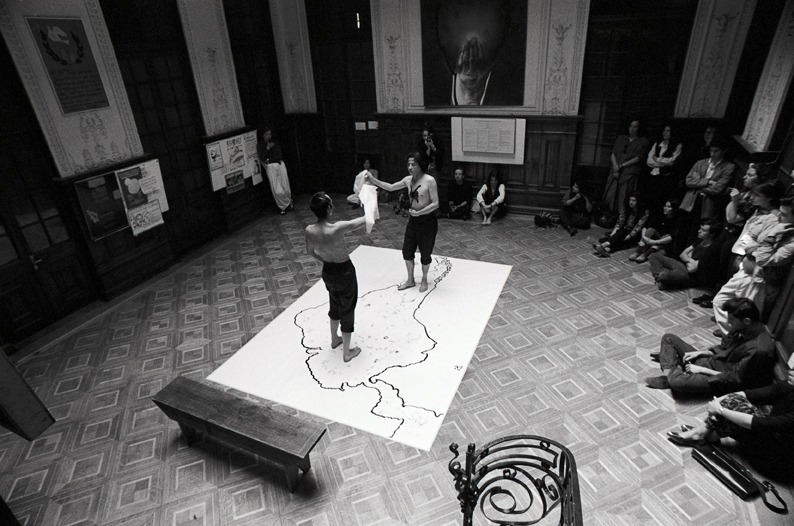 Art has the capacity to render visible that which certain political powers are determined to erase. The legacies of politically and socially engaged art within the context of contemporary Latin American history provide an array of artistic strategies in which creative action and political action were necessarily indistinguishable. From the 1960s through the late 1980s, repressive political regimes permeated Latin America. Consequently, artists began rethinking ways of making work that addressed the experience of living through the violence, censorship and oppression under these governments.

These complex histories are the point of departure for the group exhibition, “The Edge of Things: Dissident Art Under Repressive Regimes,” currently on view at Michigan State University’s Broad Art Museum, which features sculpture, installations, mail art, performance, video and photography by sixteen artists and two artist collectives. Organized by associate curator Carla Acevedo-Yates, who was recently appointed curator at the Museum of Contemporary Art Chicago, the exhibition reveals, as the title suggests, that artists working under military dictatorships, specifically within the contexts of Argentina, Chile and Brazil during the 1960s to the late 1980s, made a legible shift towards practices that blurred the distinctions between creative disciplines, public and private space, and art and activism.

In describing her approach to organizing the exhibition, Acevedo-Yates said, “People might be thinking, why should I care about these artists? Why have this exhibition here? Why think about these histories? But for me and for a lot of folks these histories are a part of American history because there was so much involvement of American politics in supporting these dictatorships.”

Through a historical timeline and didactic wall texts produced by doctoral students from multiple disciplines at MSU, the exhibition begins by offering a broader geopolitical context that includes the details of Operation Condor, the United States-backed campaign of political repression and CIA intelligence sharing designed to overthrow democratically appointed leaders who posed a threat to American financial interests during the Cold War. As a result of this terror program geared at eradicating communism in Latin America, some journalists have speculated that nearly half a million people were brutally murdered or “disappeared” between the 1950s and 1990s. 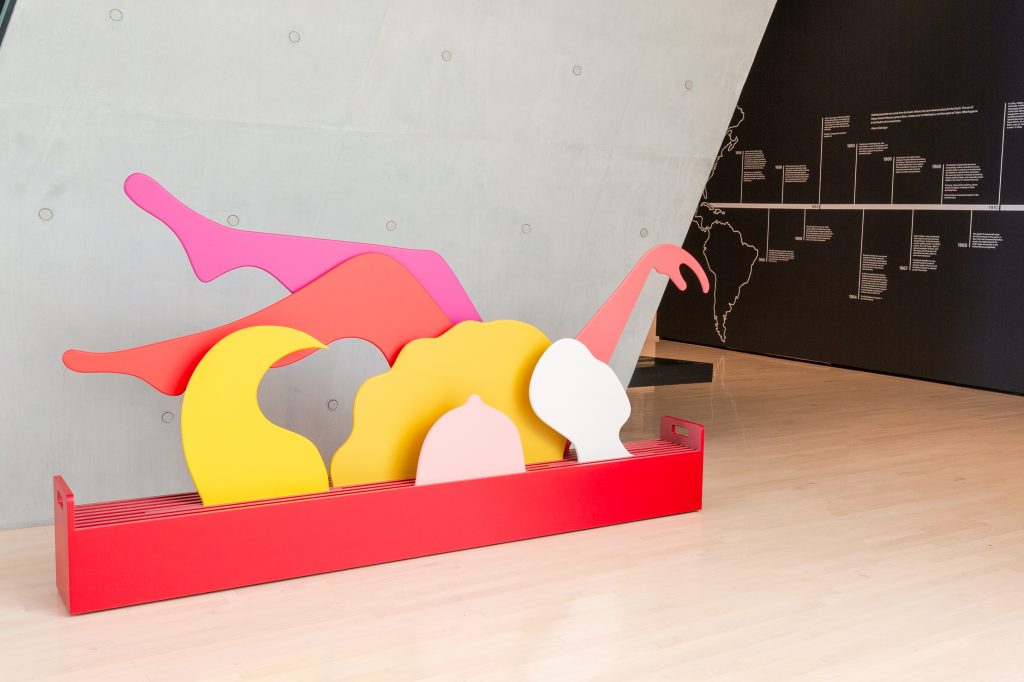 Brazilian artist Regina Vater’s “Mutant Woman”(1968) opens the exhibition with a colorful, Pop art-inspired piece comprised of silhouetted parts of a woman’s body set on a grooved base, which are inert unless moved to the left or right by visitors. Here the artist nods to the objectification of women’s bodies, but also illuminates what cultural theorist Nelly Richard, who writes extensively about women artists making dissident art under General Augusto Pinochet in Chile, might interpret as “disempowering the frontality of the male gaze.” This work, like many others in the show, draws attention to the subjugation of the body in relation to public space, for example, by limiting the freedom of movement (i.e. implementing surveillance, curfews, restricted areas). Women’s bodies and queer bodies are some of the first targets in the rise of repressive regimes.

Nearby, projected onto a banner-like video display, plays archival footage of the political aesthetic actions of the Chilean collective Colectivo de Acciones de Arte (CADA), a group of artists, poets and other creatives who were active in Santiago between 1979 and 1985. Titled “No+”(1983-89), the video depicts several men lining up over a bridge and one by one unfurling banners that together read “No Mas.” This series of public interventions was a call to action to the public of Santiago, where the slogan was eventually co-opted by its citizens and could been seen throughout the city. In a climate of fear and violence, very little distinction was made between artistic action and political action.

Artists communicating with each other and the general public by means of distributing messages through everyday circuits was one of the most prevalent strategies emerging in Latin American art in the 1970s. “The Edge of Things”accounts for this from multiple artistic perspectives, in part by offering a section of the show to the leading figures of mail art or correspondence art in Chile, Argentina and Brazil. Edgardo Antonio Vigo’s “Libro internacional,” a three-volume mail art project started by the artist in 1976 when he was living through the military coup d’état in Argentina, is presented on the gallery wall alongside intricately collaged postcards “Bloody Information”(1986) and “For our missing ones (Pelos nossos desaparecidos)” (1986) by Brazilian artist Paulo Bruscky. Complementing the work of Bruscky and Vigo is one of Eugenio Dittborn’s airmail paintings created during Pinochet’s cultural blackout in Chile. “Histories of the Human Face” (1998-present) consists of of two quilt-sized sections of fabric installed side-by-side on the gallery wall. Dittborn silkscreened an incomplete grid of monochromatic mugshots sourced from found photographs of anonymous individuals. The fragmented grid suggests that the images are being collected over time, and more than likely allude to those who were targeted and/or killed for being dissidents. Embracing the life span of the piece itself, the artist considers the legible creases from folding and mailing the work to be integral to its aesthetic, in addition to presenting the envelopes with the work’s exhibition history. Circulating art through the very same postal system regulated by these governments was a practical and pointed means to transgress censorship. 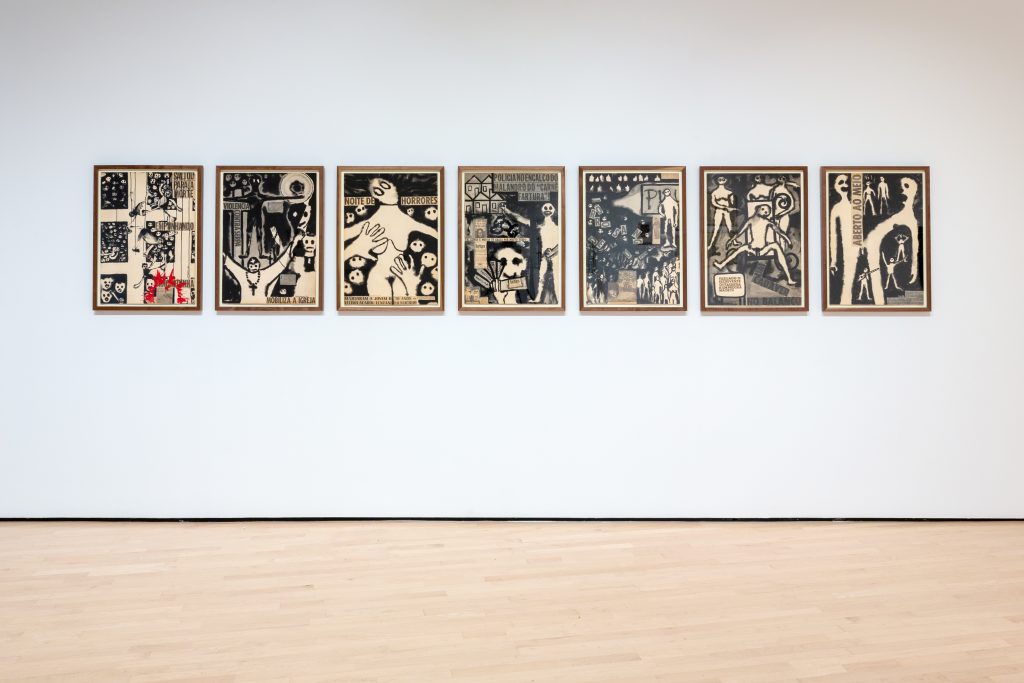 Another moment of kinship amongst the artists here includes the large presence of video and photo documentation of actions in which the artists use their own body as the subject. Letícia Parente’s iconic video “Marca registrada (Trademark)” (1975), where she sews “Made in Brasil” into the sole of her foot, is a critique of economic imperialism and the reification of national identity. A gesture that also makes visible the trauma under authoritarianism. Lesser known in the United States, the queer artist collective Yeguas del Apocalipsis—translating to Mares of the Apocalypse—have several works on view, among them is documentation of a public action, “La Refundación de la Universidad de Chile”(1988), where two members of the collective, Pedro Lemebel and Francisco Casas, rode a mare in the nude through the campus of the University of Chile, restaging the legend of the Spanish conquistador who founded Santiago. The performance functioned as a form of protest against the school administration’s noted prejudice against women and queer students, an action imbued with both strength and vulnerability. This sentiment continues in black-and-white photographs documenting their performance “La Conquista de América(The Conquest of America)” (1989). One of the more striking images depicts the two artists from behind, sitting next to each other on a bench completely nude except for headphones. They stare in the direction of an unusual map of South America on the floor. For the performance, the two men dance a cueca, Chile’s national dance intended for a male and female dancer, along the edges of a borderless map of South America which is outlined on the floor in broken glass. According to Acevedo-Yates, the artists are referencing “cueca sola, a symbolic appropriation of the dance by the mothers and daughters of the disappeared. By dancing alone, these women represented the absence of their male family members.” The social climate of fear and trauma was further exacerbated by the AIDS crisis. This performance happened the same year that Robert Mapplethorpe died from an AIDS-related illness.

Just across from Yeguas del Apocalipsis’ photographs is a floor-to-ceiling, black-and-white image printed on vinyl. “Siluetas y canas (Silhouettes and Cops)” (1983) depicts two Argentine police officers looking in opposite directions just outside of the frame, behind them a row of silhouetted human bodies is pasted onto a public wall. The photograph is documentation of a public demonstration organized on September 21, 1983, by artists Julio Flores, Guillermo Kexel and Rodolfo Aguerreberry, in collaboration with Mothers of the Plaza de Mayo, an activist group comprised of mothers of the missing people. Argentine military dictator Jorge Rafael Videla used the coded term “disappeared” to describe those who had been detained, tortured and murdered by his regime. The collective “Siluetazo” project sought to recognize the 30,000 disappeared in Argentina, and to do so through the form of a silhouette near the government center of the city. Here they turned the plaza into a participatory public workshop in which people outlined their own body to represent the missing individuals. The silhouette as a motif was a powerful tool used to express the delicate relationship between bodily presence and absence. 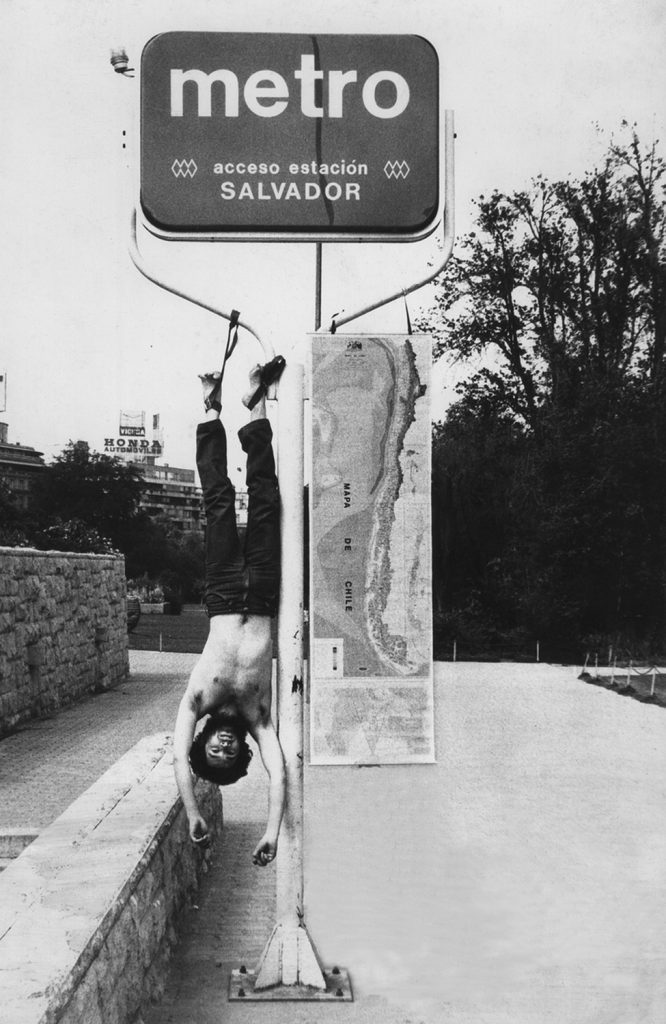 “The Edge of Things” suggests that there is still much to be learned from practices that emerged in response to repressive social and political conditions. These artists were at the forefront of the intersections of art and activism, aspiring to change their reality through art. When the confines of the museum or gallery were insufficient, the street, the postal system and even the artist’s own body functioned as exhibition venues. Unabashedly, they gave a voice to those who were silenced and visibility to those who were erased. It is nearly impossible not to think about the complicated and dark history of U.S. relations with Latin America in light of rising tensions on the U.S.-Mexico border under the policies of the current administration. When rhetoric like “illegals” is circulated in the media to invalidate the humanity of certain types of people without nation-state-recognized citizenship, does that not become a step in the direction of rhetoric like “disappeared”? In our present context, how can art still have teeth in a much more complicated information landscape? Especially when we live in a moment where the aesthetics of protest have been co-opted by commercial advertisements: what new forms of dissidence can be imagined by artists today? (Kristin Korolowicz)

“The Edge of Things: Dissident Art Under Repressive Regimes”is on view at Michigan State University’s Broad Art Museum until January 5, 2020.

Disclaimer: Travel and accommodations for Kristin Korolowicz to view this exhibition were paid by the Eli and Edythe Broad Art Museum at Michigan State University.