In 2018, sculptor Melvin Edwards staged a solo exhibition at MASP museum, his first in Brazil, with works from 1963 to 2016 of his celebrated ongoing “Lynch Fragments,” a series associated to slavery and detainment. The Texas-born pioneer in contemporary African-American sculpture, and first African-American sculptor to have a solo exhibition at New York’s Whitney Museum, in 1970, is back again this year for a solo at the art space auroras. 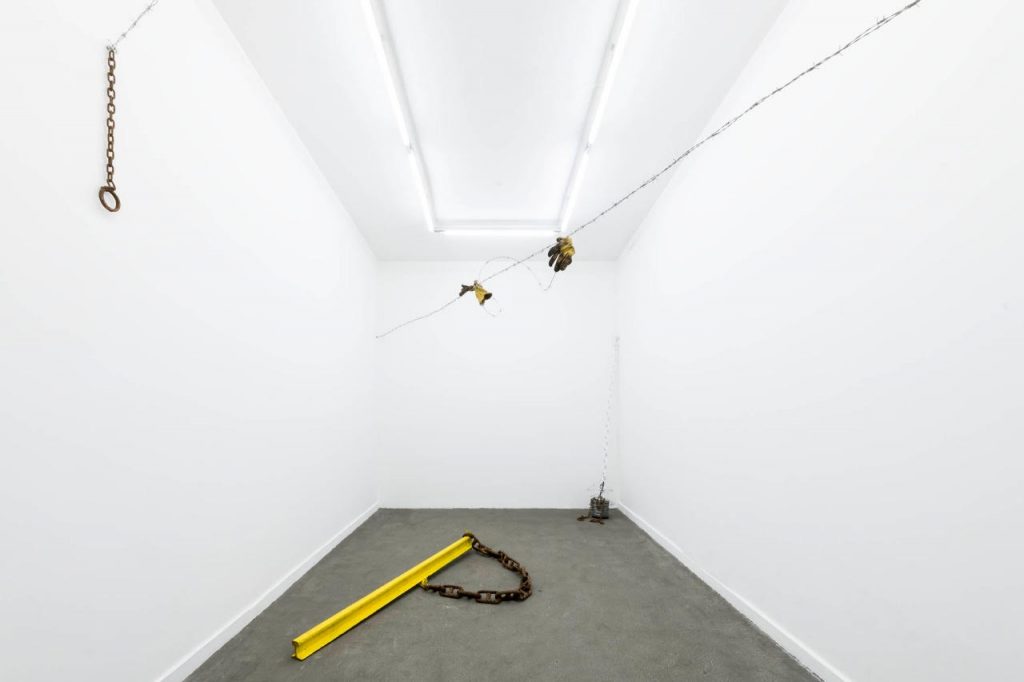 This time Edwards, who’s lived in New York City since 1967, produced all his steel, chains and barbed-wire sculptures during a twenty-day residence in São Paulo at the mid-century home that has housed auroras since 2016. The work, a visceral cry of resistance and outrage against racism and violence, resulted in the one-room installation “Continuous Resistance Room”; a barbed-wire installation “Curtain Calls”; fourteen medium-to-small floor and wall sculptures; and twelve watercolors. An impressive production considering the eighty-one-year-old ex college football player selected the scrap metal, designed and welded all his abstract assemblages from scratch in an exceptionally hot summer season.

We talked to auroras founder Ricardo Kugelmas about the experience.

Ricardo, what draws you to Melvin Edwards’ sculptures?
Melvin Edwards’s career spans almost six decades. Since the early 1960s he has produced a remarkable body of work: sculptures, installations and drawings. His works are formally abstract—they evoke history, culture and politics without being literal. Last year the MASP museum organized a great exhibition focused on his most known series of sculptures, the Lynch Fragments. On the other hand, the idea of the project at auroras was to show the Brazilian public other aspects of Melvin’s work, such as his barbed-wire installations, large sculptures and works on paper. 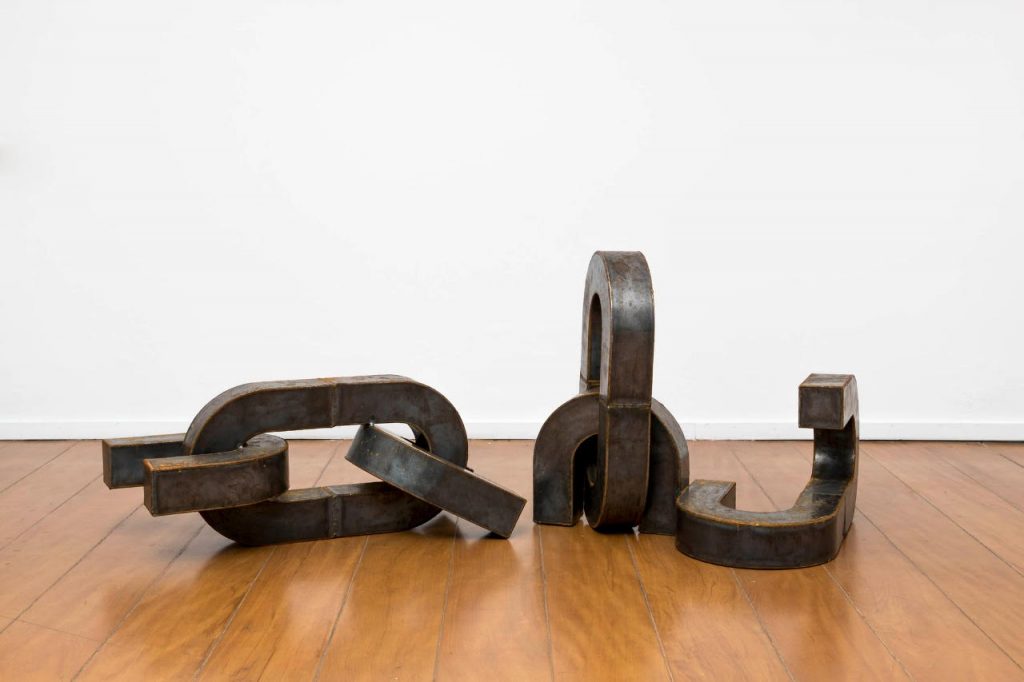 Tell us about his residence at auroras.
We planned to show at auroras the other side of his work since his MASP exhibition was the most complete presentation of the Lynch Fragments of the artist’s career. However between making a large sculpture and a large installation for the auroras solo, Melvin ended up making six new Lynch Fragments that can be seen together in the last room of the exhibition: “Boa Sorte, Primeiro Dia”  (Good Luck, First Day); “Numunake Inike OK”; “Systematic”; “For Our Connection”; “We Do”; and “We Dig.” Aesthetically speaking, you can’t really recognize these works were made in Brazil since the material used—plow discs, tools, knives, chains, car parts, gate ornaments, and scrap—exists everywhere else. From a historical perspective, it is the very first time he’s produced works in Brazil, so it’s definitely a special occasion for Brazilians to see sculptures from a great American artist being produced 100-percent locally. 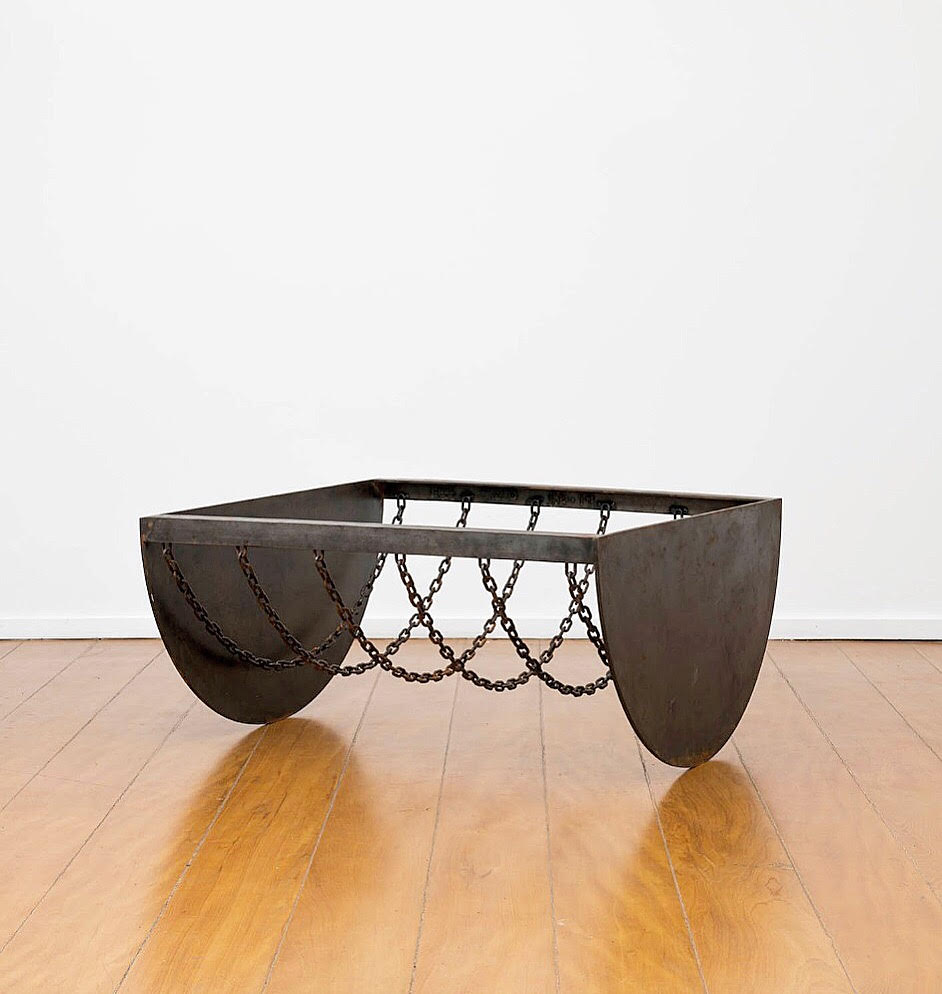 When did he arrive in São Paulo to work on his pieces?
He arrived in São Paulo on January 20th and worked for ten hours straight every day for two solid weeks. I insisted on one or two days off, but his work was going on so well he decided not even to take lunch breaks. Luckily we had a chance to have a few caipirinhas after his ten-hour welding journeys.

Had he been to Brazil before his 2018 solo at the MASP museum?
Melvin was in Brazil in 1986 with his late wife, poet Jayne Cortez, who was on a world tour organized by the US government. He returned in 2018 for his opening at the MASP and now for the third time for his solo project at auroras. 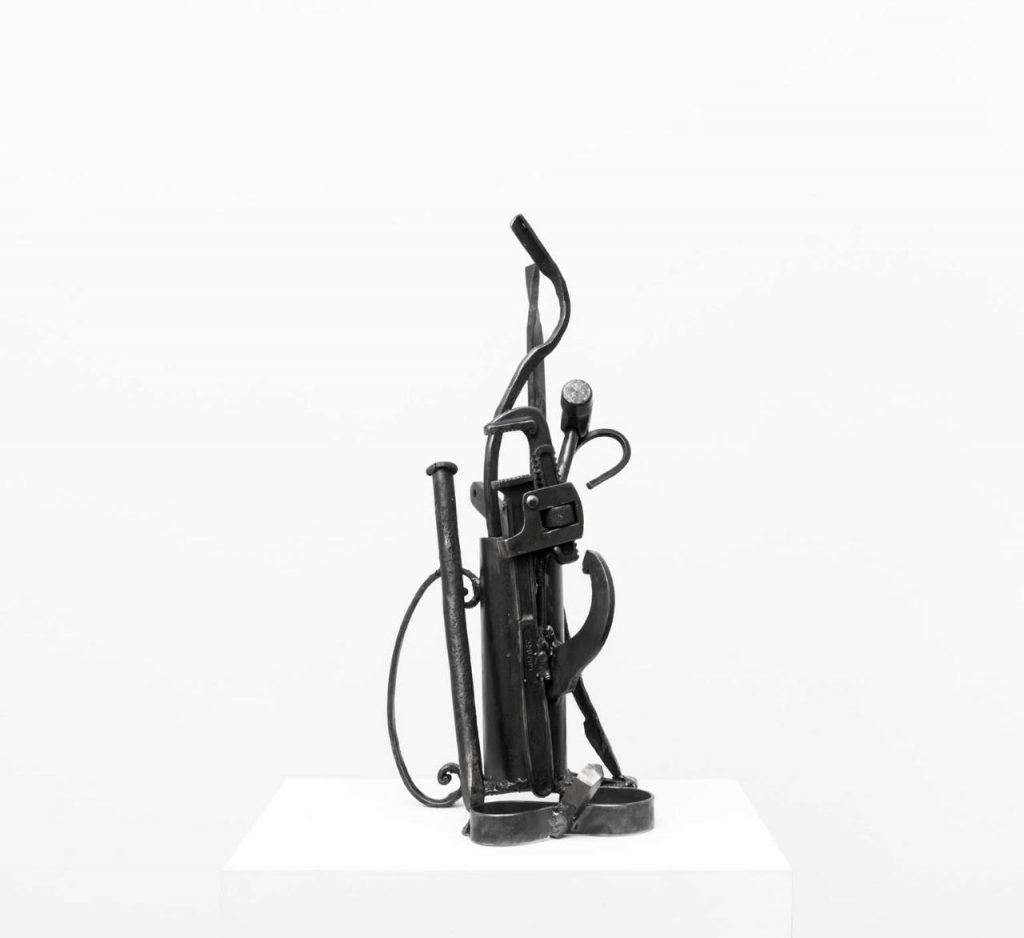 Where did he work on the pieces?
During his trip to Brazil last year I took Melvin to a scrapyard in São Paulo and he selected a lot of pieces: chains, tools, railroads tracks, pieces of gates, and scrap. When he arrived in São Paulo in January I brought him to the facilities of Madeeeeira—yes, madeira [wood] with four “e”s—and he decided to work on the welding right there where he had access to all the necessary machinery and tools, as well as the support of Mauricio Pereira and Paulo Galvão, who have collaborated with artists like Tunga and Lenora de Barros in the past. The assembly of the large installations was made at auroras a few days before the opening.

After the exhibition at auroras he flew to Cuba. I read his tallest sculpture is in Santiago de Cuba. What took him there this time?
Melvin has friends in Cuba and has produced works there in the past. He went there to visit the family of a friend who recently passed away and to discuss a new project. 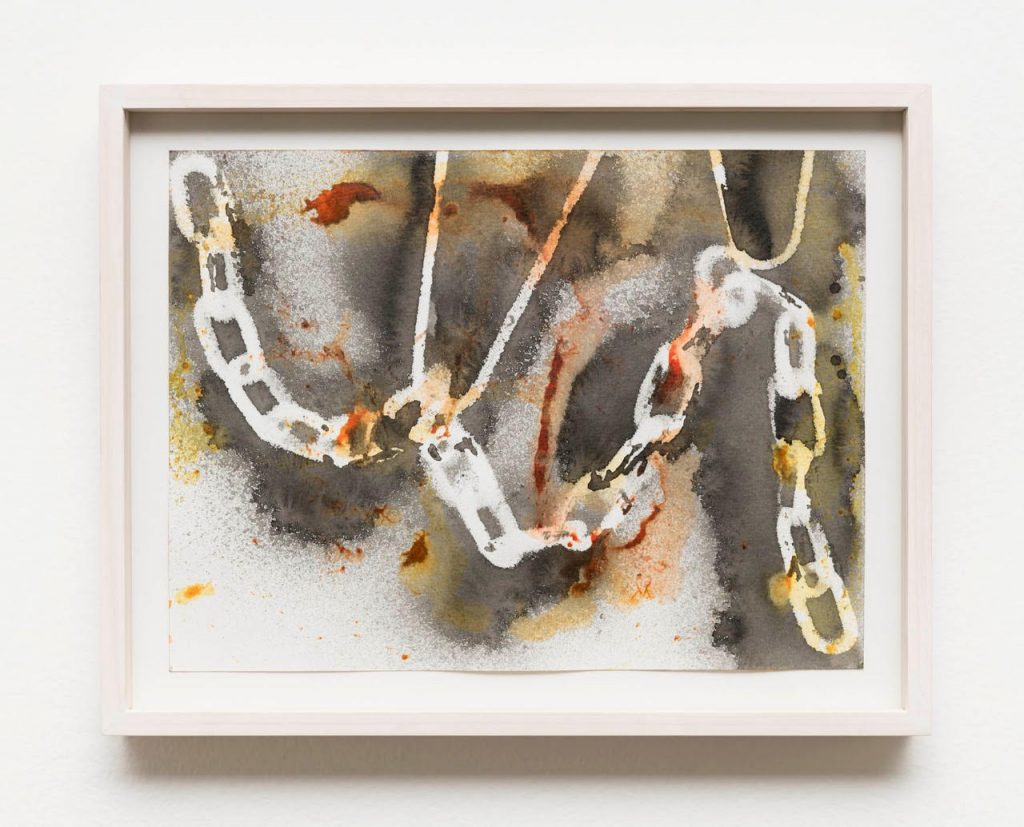 Does he still keep his studio in Dakar, Senegal? Are most of his works produced on site?
He works from a few studios: Accord (Upstate New York), Plainfield (New Jersey) and Dakar. He enjoys producing works on site, like he recently did in Oklahoma and now in São Paulo.

He appreciates jazz and played football during college. What did he tell you about his involvement with jazz and football?
He played football in high school and at university, but wisely chose the career as an artist over the career as a football player. He’s in great shape even if his years playing football left him with a “football knee” as he says. He told me several jazz stories, including spending time with Miles Davis, who he met through a common friend. Miles owned one of his small sculptures. 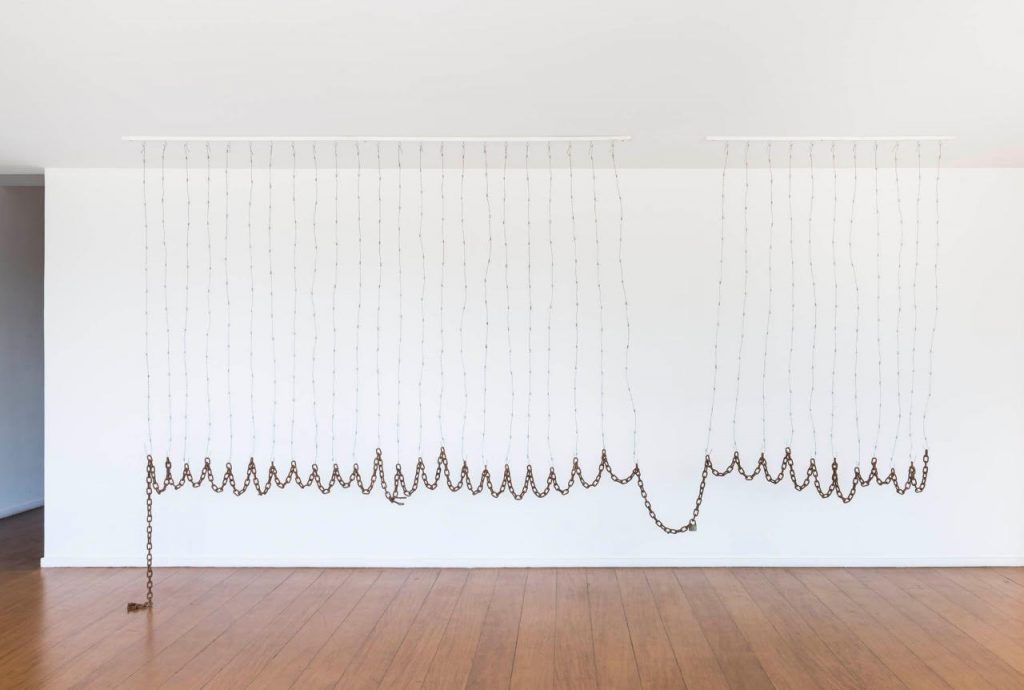 How did you get to meet him?
I met Melvin last year in New York through his gallerist Alexander Gray, who knows my space in São Paulo, and first planted the Melvin Edwards-auroras project seed.Melvin and I immediately got along, and for our surprise we discovered we were born on the same day—May 4th—four decades apart! 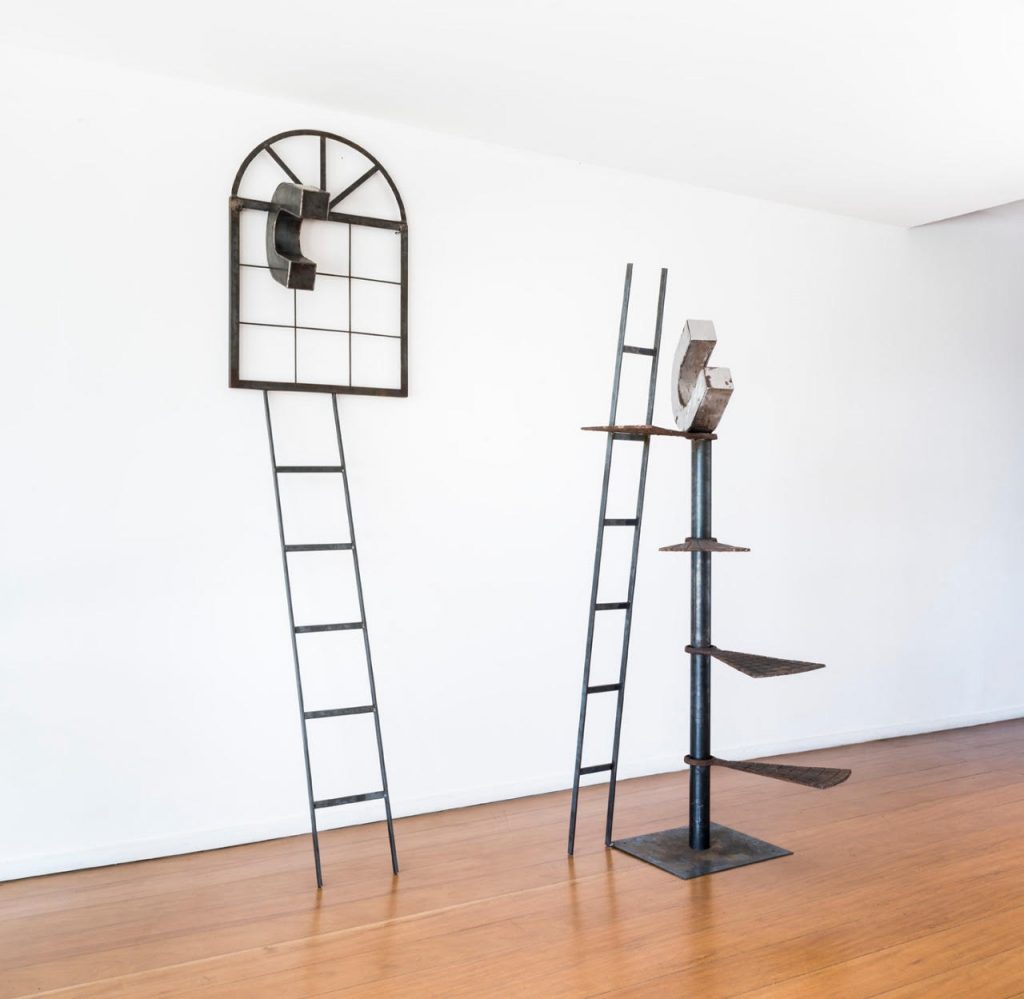 What did you learn during the two-week period with sculptor Melvin Edwards?
Being close to Melvin—the man is a walking encyclopedia—taught me several lessons that will stay with me forever: dedication, hard work, perseverance, humbleness and generosity.  More than a great exhibition, I made a friend for life. 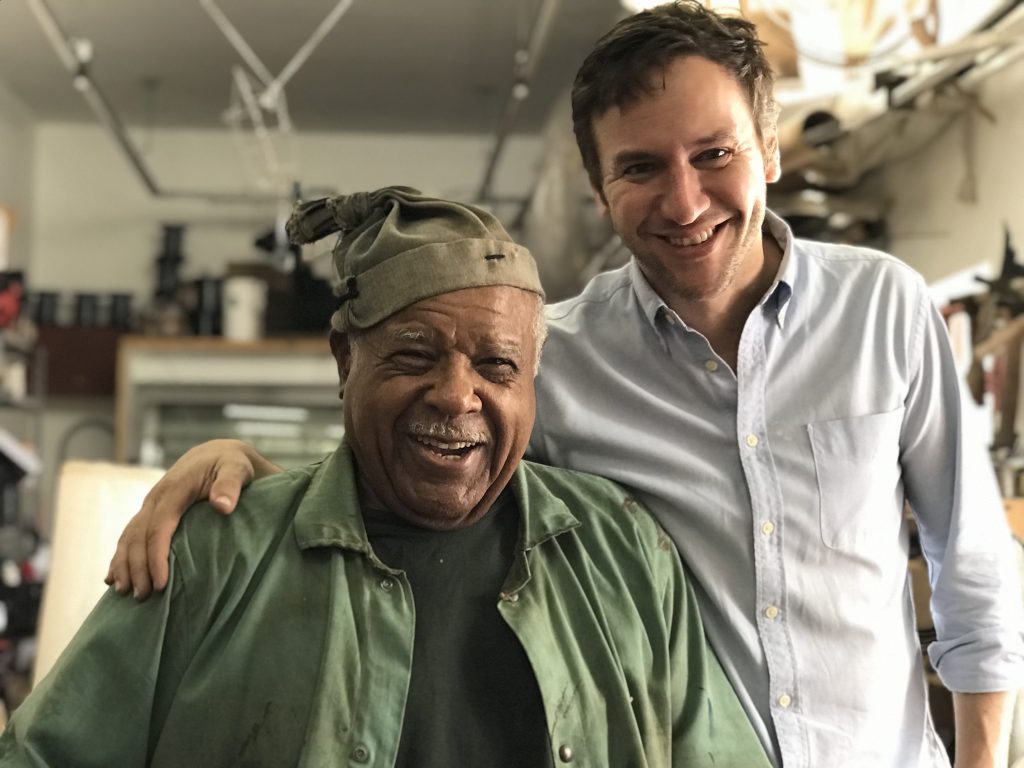