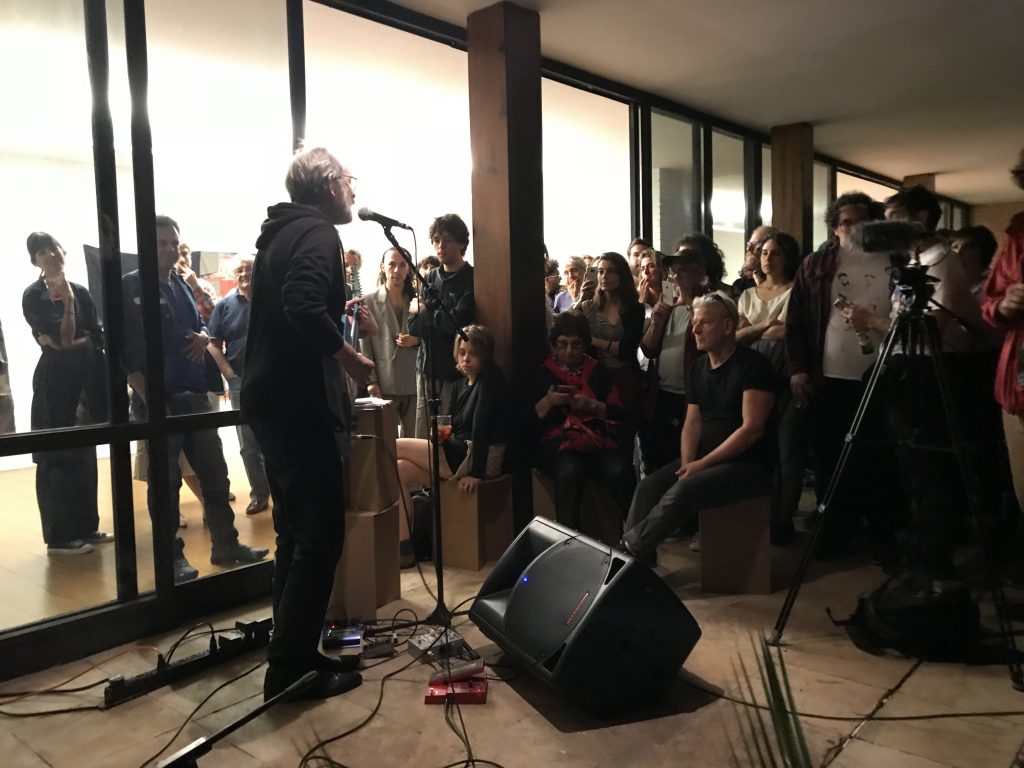 Performance of musician Arto Lindsay at opening of Transformers. Photo by Ricardo Kugelmas

The opening’s 1970s happening atmosphere came with a musical performance by American experimental composer and musician Arto Lindsay, founder of New York’s late-seventies no wave group DNA, who is stationed in Rio and has teamed up with the likes of Caetano Veloso and Brian Eno. The event also inaugurated a new space dubbed Sala de Projetos (Project Room), an autonomous area inside the auroras art compound aimed at short-duration works presented by a critical text. It launches with an iconoclastic installation by the multimedia artist Anitta Boa Vida (@anittaboavida), known for her transgressive art and persona, who had the balls to transform the new addition into a pristine white chapel for Saint Anitta Good Life in the world’s largest Catholic country… To polish off, another Rio-born unorthodox Instagram performer, Aleta Valeta (@ex_miss_febem2), launched a meme t-shirt with the image of a young, bleeding and naked Marina Abramovic in her original 1974 “Rythim 0” performance stamped over with a phrase by this carioca activist who crafts virally transmitted statements on identity, sexuality, gender equality and the art status quo: “When the circuit of contemporary art makes you physically and mentally ill and you can prove it.” The tee helps Ex Miss Febem make her ends meet since her provocations are chiefly processed in virtual platforms. The festive vanguard gathering at Ricardo Kugelmas’ auroras brings back some underground zest to the otherwise formal openings of today’s local art scene, radically different from the celebratory inaugurations witnessed in São Paulo and Rio some decades ago, and in sync with the messages of the questioning newcomers Arthur Chaves, Pedro França, Anitta Boa Vida and Ex Miss Febem. 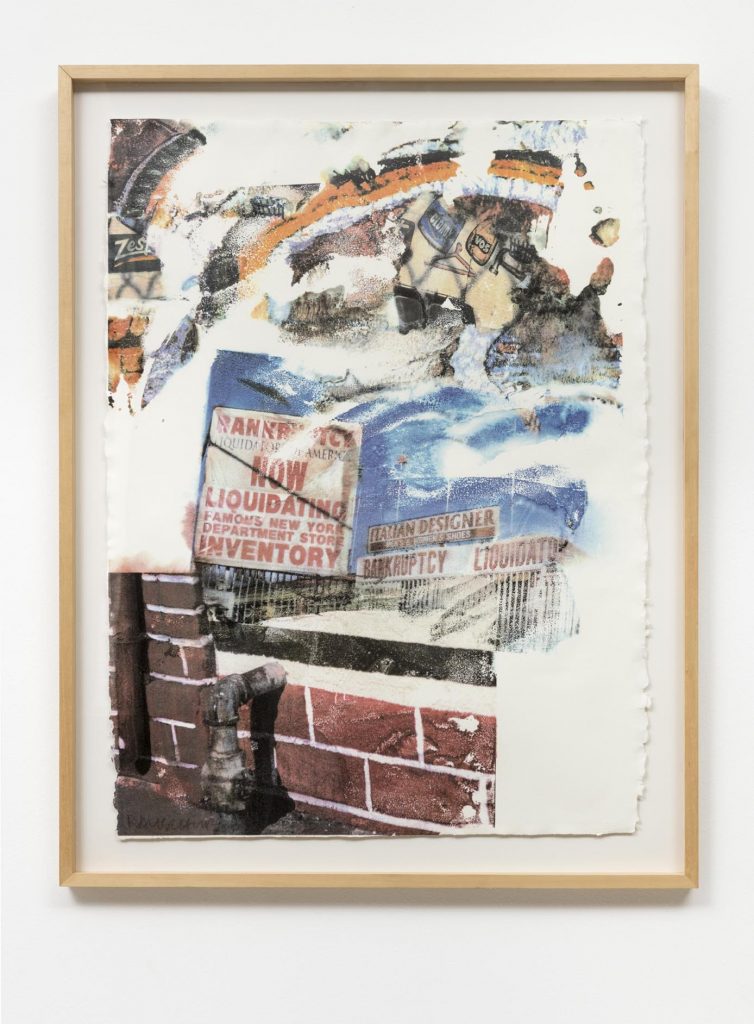 We interviewed Ilê Sartuzi, artist, researcher and author of the exhibition’s presentation text.

Ilê, how do you contextualize the title of the exhibition, “Transformers,” and its relation to Robert Rauschenberg?
The axis of the exhibition is a work of Robert Rauschenberg’s series  “LA Uncovered” in which he recreates an image of Los Angeles from fragments. It was selected as an inflection point in image appropriation, since Rauschenberg is a major influence for the other artists on show. The title “Transformers” articulates an idea of image transformation and renders an informal pitch that relates to the production of all the artists in the exhibition, plus it is also an appropriation from a Hollywood film franchise layering another unexpected angle.

Do you find there is an appropriation in contemporary art made “à brasileira”?
I usually don’t generalize about “Brazilian” art production. Appropriation has taken several directions not only in Brazil but also in the world with dialogues happening between artists from different places, no matter what geographic location. It is a manifestation that aims at togetherness both esthetic and intellectual.

Tell us more about this paradigm discussed at the exhibition.
The exhibition investigates image appropriation and its manipulation in each one of the eleven works on show. Although the number of works may be small, they all convey an intensity and use images in a singular way. For example, the videos by Pedro França explore image edition of affective memories in personal archives by layering these images. On the other hand, the work of Arthur Chaves is closer to Rauschenberg’s treatment of visuality since it renders a corporeal quality to image, also seen in the works of Leda Catunda.

Leda Catunda is one of the Brazilian artists who most explores the narrative of appropriation.
Leda Catunda is certainly one of the most important names in Brazilian contemporary art. Since the 1980s, her work succeeded to develop a coherent and instigating reasoning through image appropriation and painting—she even named her doctorate dissertation, “A Poética da Maciez” (The Poetics of Softness). She uses image appropriation on kitsch fabrics and corny materials found in street markets and vintage stores and incorporates them through her sewing machine. Leda Catunda is a major reference for the younger artists in the show.

Do you relate Arto Lindsay’s musical performance at the opening to the exhibition’s sampling concept?
Arto’s performance at auroras was memorable. His equipment was his own voice, his guitar and effect pedals to distort and create loops that made for quite a robust and complex sound during the forty-minute presentation. Although there was no requirement for Arto’s show to create a conceptual link with the exhibition, to be able to create music with samples made on the spot has everything to do with the way we deal with images today. 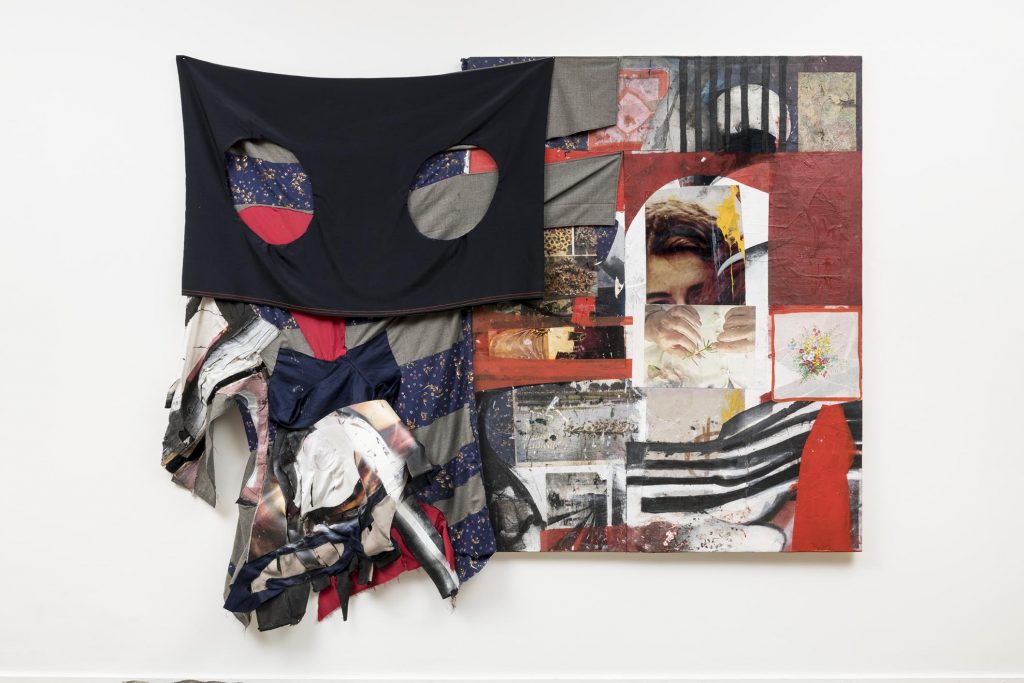 Now let us spotlight the young artists. How does Arthur Chaves tackle the issue of détournement and image sampling?
Arthur Chaves works with materials and fabrics rummaged during his walks around Rio de Janeiro, where he lives and has a studio. The images he hacks and the materials he forages are rerouted from the places they are found and incorporated in a totally different media. This derailment renders them a new meaning and is understood as a strategy of détournement. Another aspect of his work are his drawings made of volumes and voids that he transfers to sewing, a tool he learned during his Fashion Design degree which is central to his art.

How about Pedro França?
Pedro França articulates references from art’s history in his paintings, like the nude female figure by Albrecht Dürer to contemporary culture, where he reproduces the neck tattoo on soccer star Neymar. His videos and paintings are processed through image layering. The clash caused by the grouping of this very distinct imagery generates new meanings otherwise not found in their original context.  Like all the other elements in his canvasses, the anarchist character of the “fuck the past” phrase works as a device of image appropriation with the same relevance as the fragment of Dürer’s painting.

Let us address irreverent multimedia Anitta Boa Vida (Anitta Good Life).
Most of Anitta Boa Vida’s works have her own image incorporated into the message.  This time she stuck her ID-size photo to the face of a female saintly figurine. Her stage name—Anitta Boa Vida—signals the stereotypical comments on eroticism and licentiousness in the artist’s narrative about gender equality, among other issues.

To wrap up, tell us about Instagram artist Aleta Valente, a.k.a. Ex Miss Febem.
Aleta Valente works with image appropriation from the collective imagination, such as the memes in her Instagram account or the stereotypical heavily charged sensual female images she reincarnates that abound in macho culture. Her open edition t-shirt makes an acid commentary towards the present day scene in contemporary arts.