On the list of the most sought-after shows this third quarter in São Paulo, “Concretos/ Neoconcretos Paulistas” (Concretes/Neoconcretes Paulistas), runs through November 17 at the by-appointment-only Studio Nobrega. Headed by third-generation art dealers André and Cacá Nóbrega, the low-key, exclusive art gallery has been housed since 2008 in the first floor of an elegant neo-modernist project with exposed concrete and exotic wood by Brazilian starchitect Isay Weinfeld at Estados Unidos street in the heart of the upscale Jardins area. Curated with reverence by geometric artist, Concrete art expert and our interviewee Macaparana, the collective show revolves around twenty-five exquisite mostly small-format tableaux of the 1950s/60s. The twenty-year period unveils the highlight of the Brazilian geometric artistic current that, since the 1990s, can be admired in major Brazilian museums and private collection as well as foreign institutions such as the Tate, MoMA and Houston’s MFAH.

Barsotti and Willys de Castro, curator of the solo show of Macaparana (center) at his opening at Galeria Monica Filgueras, São Paulo, 1986

“Concretos/ Neoconcretos Paulistas” stages the mathematically rigorous esthetic crusade by the founding masters who lived in or were born in São Paulo, hence the paulistas in the title. They are Willys de Castro, Waldemar Cordeiro, Antonio Maluf, Geraldo de Barros, Hércules Barsotti, Hermelindo Fiaminghi, Maurício Nogueira Lima, Alexandre Wollner, Judith Lauand, Luiz Sacilotto, Lothar Charoux, Alexandre Wollner (the only living artist of the group) and Alfredo Volpi with a rare untitled early 1950s tempera from his brief Concrete phase. The preeminent event proposed by Studio Nobrega departs from two tableaux in exhibition: “Kondensation Von Komplementar Faben” (1969) by the Swiss Max Bill and “WLS XI” (1966) by German-American Josef Albers. Both were artists and theorists associated with the Bauhaus in the 1920s and became responsible to introduce the avant-garde rationale of Concrete Art to this group of young Brazilians avid for a fresh path in the late 1940s to early 1950s, the culturally ebullient years of the first São Paulo Biennales. 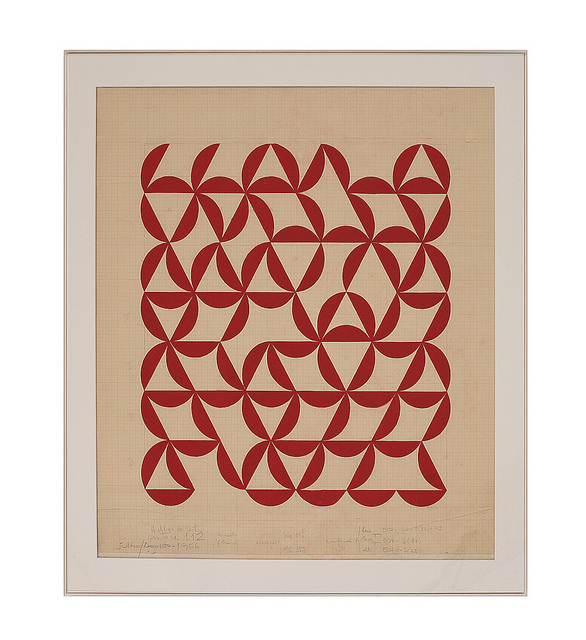 Lured by its strict concept and induced by the novel ideas that brushed away the dominant nationalism ingrained in the orgy of Brazilian Modernism, the group’s common spirit and purpose embraced the Cartesian, albeit poetic, geometric current to realize a small production, misunderstood by the local market of the period. Not large in numbers (and size) and consisting mainly of tableaux, panels, graphic art, poetry and some sculpture, the geometric art produced by the paulistas is one of the finest versions based on the theories of Theo van Doesburg described in his 1930 manifesto “Art Concret.” In it the Dutch artist, who founded and headed the De Stijl, distinguishes the movement from abstraction, which could include the “abstraction of forms in nature,” while “concrete art” was “cerebral,” “directly from the mind.” Yet Brazil’s Art Concret artists struggled for recognition since it was only acknowledged thirty years later, in the mid 1990s, by local and international experts followed by a string of attentive collectors. Willys de Castro, one of the exponents, predicted the outcome to his friend Macaparana a few months before passing away in 1988: “In thirty, forty years time my oeuvre will be hanged where it deserves to be admired.” 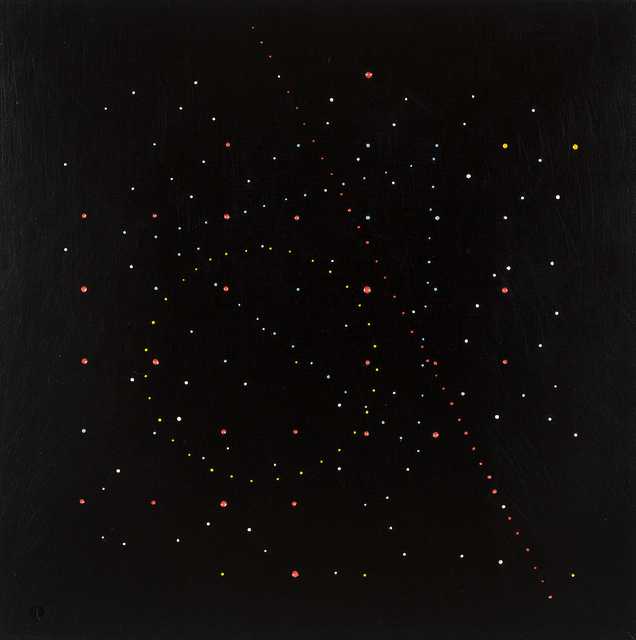 Before the interview with Macaparana, let’s go back to pivotal Ferreira Gullar (1930-2016), to understand the distinction between Concrete and Neo-Concrete art. The influent intellectual, Neoconcrete poet and founder of the counterpart group in Rio de Janeiro privileged me with a long, clarifying and interesting (to say the least) interview by phone from his studio in Rio in 2012, when he was eighty-two: “Rio’s Neo-Concretists were more eclectic-minded, as seen in the works of the Grupo Frente, its original denomination, which encompassed geometric, figurative, abstract-expressionistic narratives and even naïf painting. Grupo Ruptura, the first name given to São Paulo’s future Concrete movement, had a more coherent set of ideas secured by a firm Concretist ideology. The difference between the two was evident at the I Exposição Nacional de Arte Concreta [First Exhibition of National Concrete art], in December 1956 in São Paulo, and in February the following year in Rio. (…) Today, Concrete and Neoconcrete art is inscribed in Brazilian art with much thought and writing given to its role in the course of this history.”

Macaparana, you met most of these artists and became friends with Willys de Castro and Hercules Barsotti. In its time what did Concrete and Neoconcrete art bring to the Brazilian art scene?
On the cusp of the 1940s and throughout the 1950’s decade, Concrete and Neoconcrete art provoked both a philosophical and plastic rupture disengaging Brazilian art to the principles of Modernism that dominated the artistic panorama since the “Semana de 1922” (Week of 1922). This radical rupture had a major impact among young artists and intellectuals who searched for a new path. They found it in Art Concret advocated by the Swiss Max Bill and German Josef Albers, who visited Brazil to exhibit their works at the time of our first São Paulo Biennales. Their revolutionary theories echoed the yearning for a new guideline that these young artists were searching for since it had well-formatted ideas, both conceptually and esthetically, on a par with post-WWII atmosphere. In place of the Modernist figurativism based on nationalistic or regional themes, on the contrary, these young artists embrace the universal rationalism found in Geometric art and thus became the new avant-garde of São Paulo. 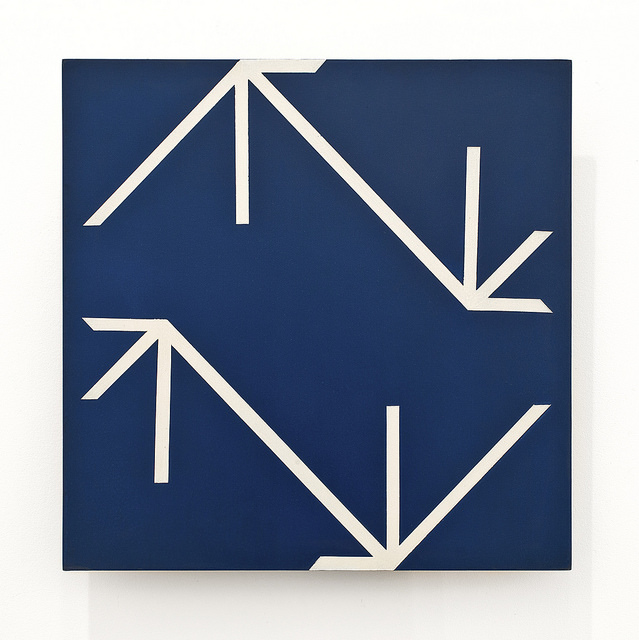 So how did the post-WWII atmosphere contribute to promote Concrete and Neoconcrete art?
A direct consequence of the end of the war was a wave of optimism stimulated by Brazil’s policies to promote the development of the nation, which had a direct effect in the arts. The canvas is now built exclusively with aesthetic elements—flat surfaces and colors—with no other psychological meaning whatsoever. Another contribution of Concrete art is the end of the influence of the École de Paris over Brazilian art. 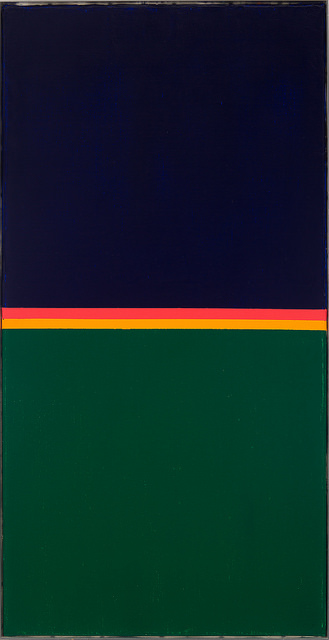 How about the influence of Max Bill and Josef Albers on the group?
It was the theories of these two intellectual artists, both associated to the Bauhaus ideology, which prompted the interest in geometric abstraction in these young artists in two transformative events in São Paulo. The first took place at the MAM/SP (Museum of Modern Art of São Paulo) in 1949/1950, the other was the First São Paulo Bienal, in 1951, when Max Bill won first prize for his iconic metal sculpture, “Tripartite Unity.” At Studio Nobrega are on show Bill’s oil on canvas “Kondensation Von Komplementar Faben” (1969) which exemplifies his Concrete theories, as well as Albers’ “WLS XI” (1966), that demonstrates the rigor of his schematic and chromatic purism in a three-color aluminum-plate lithograph from his famous series. 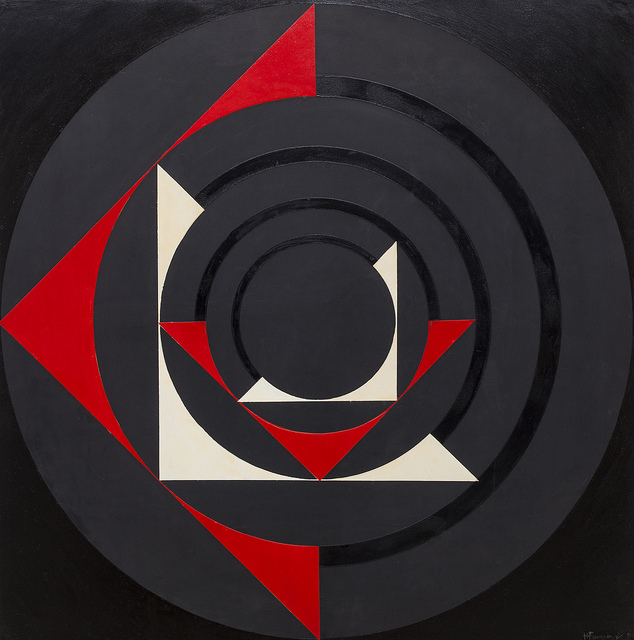 Concrete art had its echo in artists in Rio through the group that called itself Neoconcrete. However the division was less a geographical concern and rather of conceptual nature as explained by poet Gullar. For example, your friend Barsotti lived and worked in São Paulo all his life, and referred to his works as Neoconcrete. Since the exhibition unveils only works of the paulistas how does it cross the divide between the two groups?
My aim, as curator, was to highlight geometric abstract art produced by the Concrete artists in São Paulo since its inception in the 1950s up to the rise of Neoconcrete art in Rio, culminating with the adoption in 1959 of the Concrete and Neoconcrete denominations. I don’t regard the separation of the two as a chasm but rather as a contribution of the creative process of an aesthetic theory with flexible ideas and complementary overtones as we can clearly admire in this unique exhibition. 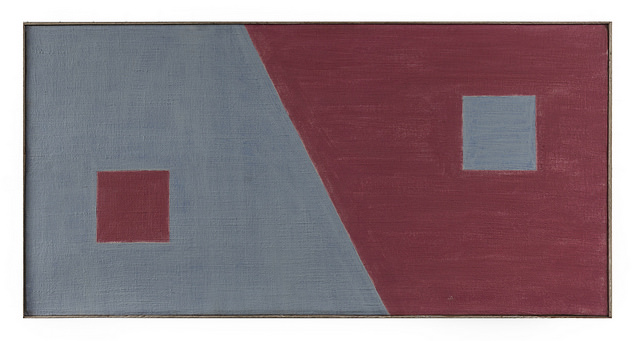