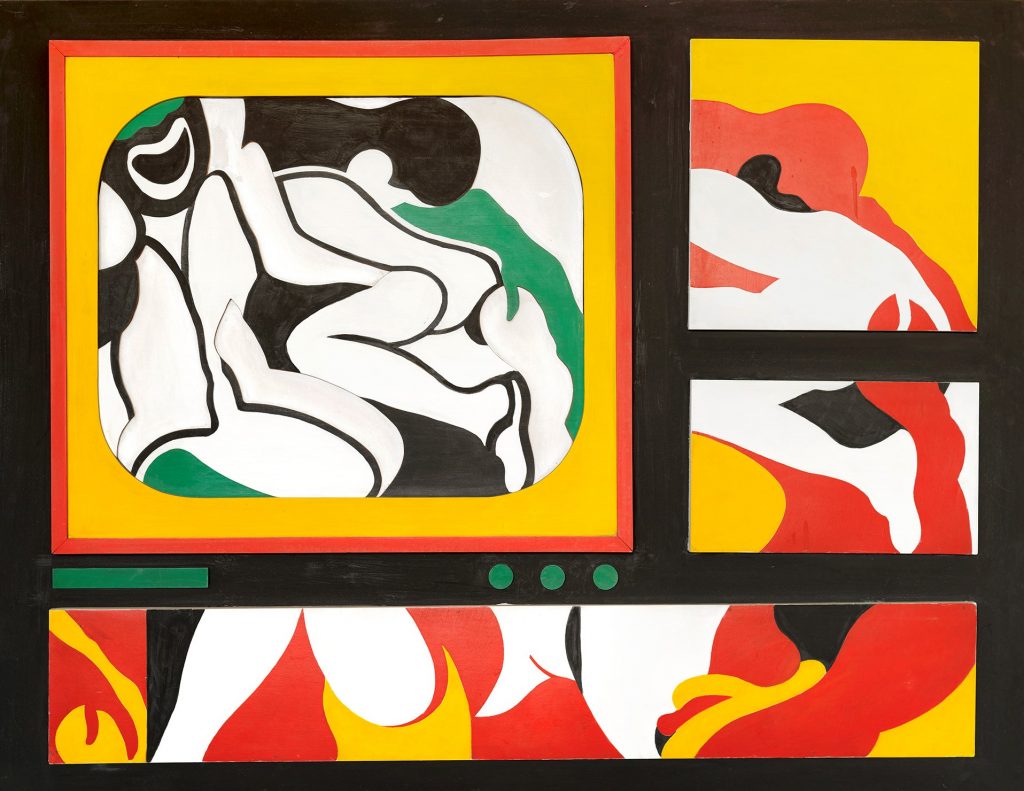 “My art has always been this way, corporeal,” Teresinha Soares says. “It is as if I were born, as if I had given birth. It came to me as a cry. It was an organic need to jump, to show, to speak and to fight for what I thought was right. It was a very intimate thing, I was very attached to art.” Having produced works of controversial and erotic character in the late 1960s, she was one of the first Brazilian artists to deal with gender issues and to defend the rights and sexual freedom of women. The exhibition “Quem tem medo de Teresinha Soares?” (Who is Afraid of Teresinha Soares?)”, curated by Rodrigo Moura and Camila Bechelany, brings together more than fifty works from the intensely productive period between 1965 and 1976 by the nonagenarian artist born in Araxá, Minas Gerais, in 1927. It is also the artist’s first major solo exhibition in more than forty years. 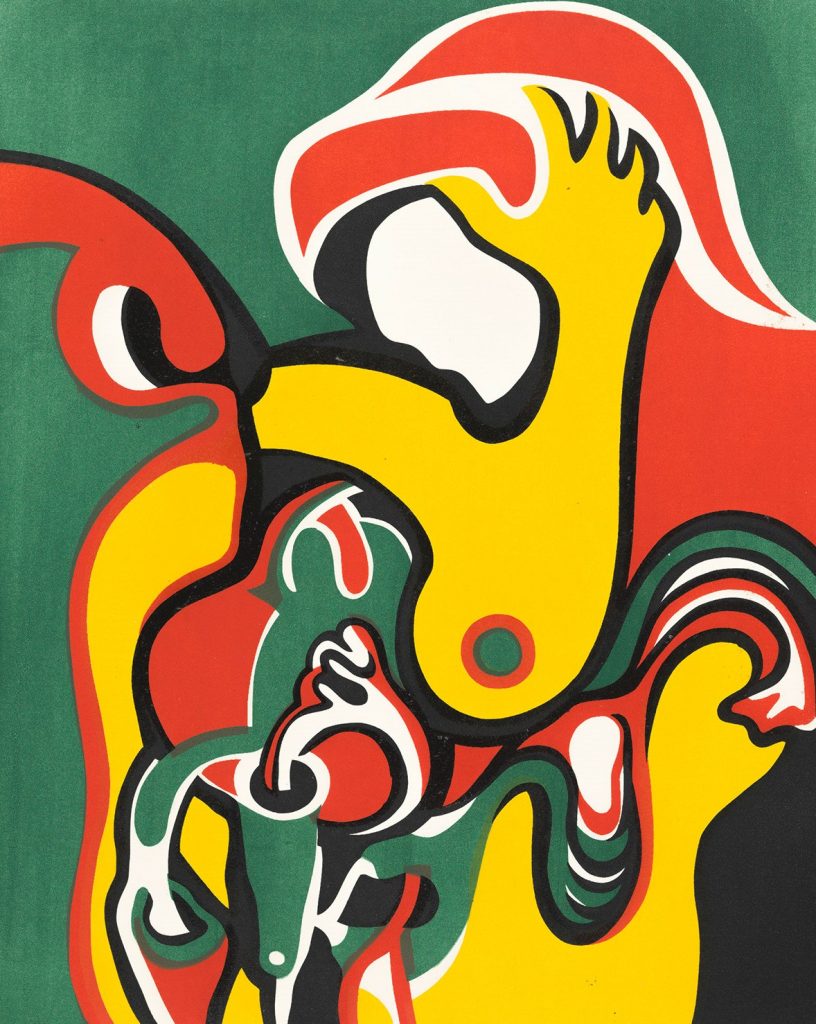 The title of the exhibition was taken from an article by Henry Corrêa de Araújo in the Estado de Minas newspaper in 1973, which in turn referred to the play “Who’s Afraid of Virginia Woolf?” by Edward Albee, which itself is a reference to the music of Walt Disney’s three little pigs, “Who’s Afraid of the Big Bad Wolf?” The artist’s irreverent and free-wheeling conduct seems to have frightened the conservative and Catholic elite of Minas Gerais at that time, which justifies the choice of the title for the exhibition. “The woman has to have pleasure, desire, without crime and without punishment. To have courage to show herself, to feel up to a man, to question—including her erogenous zones—to a emancipation, pleasure, encounter. This is all present in my work,” she once said.

Her lysergic sensuality occupies the second basement of the museum with paintings, drawings, engravings, objects and installations, as well as a photographic documentation of the artist’s performances and happenings. An emancipated personality, Soares is also a writer and was the first banker and first elected councilor of her hometown, as well as a public servant and teacher.

There were several associations of her works with some tendencies of the 1960s, such as the global pop art, the nouveau réalisme and the new Brazilian objectivity, yet the artist always insisted on a spontaneous and personal feature for her language. Her work gained immediate recognition upon its public exhibition. Even though she quit the craft in 1976, her works have increasingly been integrated into international exhibitions such as “The EY Exhibition: The World Goes Pop” (Tate Modern, London, 2015), “Arte Vida” (Rio de Janeiro, 2014) and “Radical Women: Latin American Art, 1960-1985” (Hammer Museum, Los Angeles, 2017).

From her first scrawl to her performances, the female subject has always been her leitmotiv. The artist, who imbibes art as inseparable from life, approached diverse artistic medias to reveal the different notions and concerns of the female body: domestic life, biological cycles, sexuality, maternity, fears, victimization and lack of equalization. She also explored the political notion of this body as example of works that refer to the repression of the “lead” years, from 1964 to 1985, dominated by the military in Brazil. “Man is a political animal. And politics is in our lives, at home, among our friends, at work,” she summed up once.

The artist gave us a quick interview about her exhibit at MASP.

Today the contemporary art scene, especially the big events such as biennials, has increasingly valued the works of “artivists”—whose performance include not only art but also politics, education, etc.—that rose in the 1960s. You defined your work during an interview as a cry, a need to speak for what you believed or bothered you. Do you think that the relevance of your production goes against this current urgency, perhaps due to the world crisis and that of our country, of facing the artistic gesture as endowed with a transforming power? What can your work say to those, regardless of gender, who come to visit the exhibition?
I recall my thoughts written in the catalog of my solo exhibition that took place at the Petite Galerie in Rio de Janeiro in 1971:

Until yesterday, I was looking for explanations.
Today I just want
To eat and excrete things.
There is no longer permanence
but passage.

This urgency was always a biological necessity: seeing, feeling and speaking. My art is erotic, realistic and contestable. I do not see only the reality of man submitted to myths and slogans. My art is realistic precisely because I consider the false values present in the society to which I belong. In my works, it is difficult to identify where the man and the woman is, as in the three engravings “A Man and a Woman” (1967) and “Successful Coupling” (1968). In these works the inside and the outside are confused. I have always had a lot of respect for individual choices. Love for me is what matters. 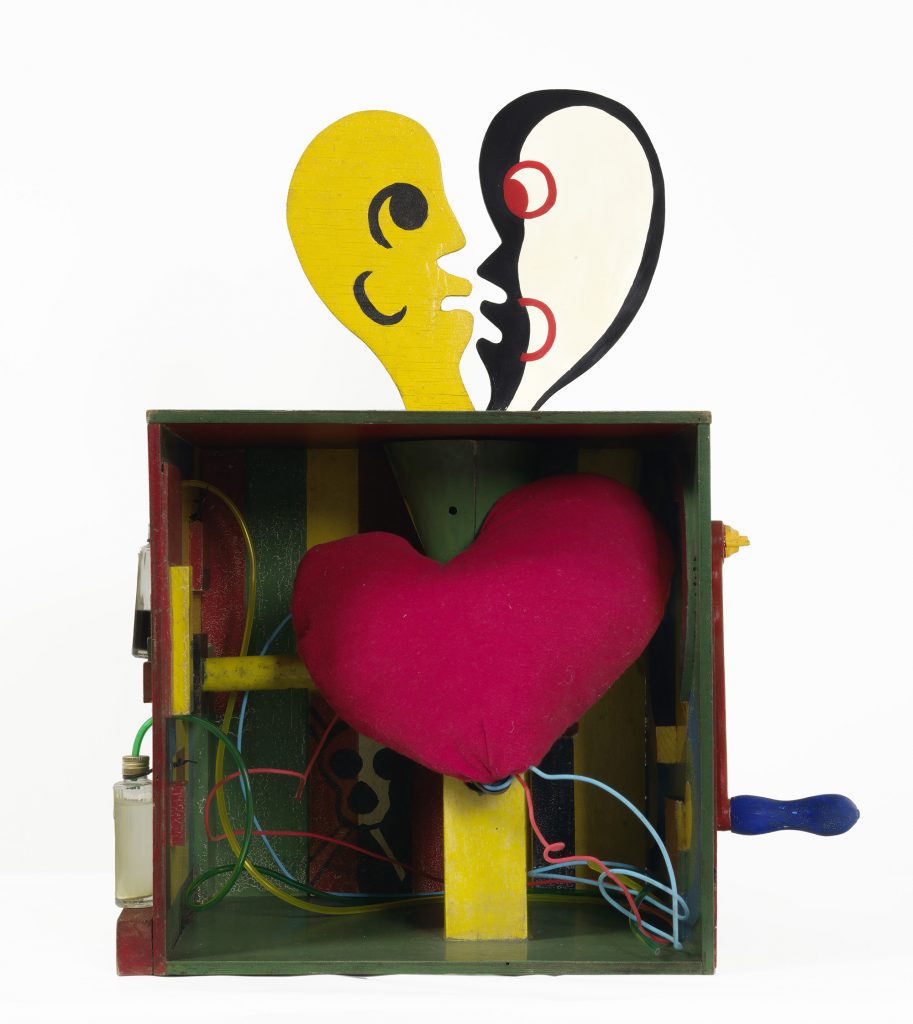 The work “Caixa de fazer amor” (Lovemaking box), 1967, was one of your first sculptures and seems to have synthesized the essence of your practice that would unfold in sculptures, performances and engravings. That work is also considered a milestone in the production of the New Brazilian Objectivity. Can you tell me a little bit about it?
Oh, my Lovemaking box… I still have fun with it. It started as a joke. I bought a tico-tico machine, wood, and I built it without any experience in joinery. It shows two faces that can be two beings almost kissing. Both go through a grinding machine and, out of it, a big red heart comes out. Love is beautiful! Complementing it: a crank that works the other way around, two bottles of oil, a door, a key; and also wires suggesting electricity and a skull as evidence of danger. I often say that my work is open and that it dispenses any labels. Every critic has his/her personal opinion. The art critic Mario Schenberg wrote the following sentence in the presentation of the catalog of my exhibition at the Art-Art Galeria, in São Paulo, (1968): “one of the most prominent artists of the new objectivity; even its visceral realism is also an anti-bourgeois humanism. ”

The show covers a short and intense productive period that occurred between 1965 and 1976, before you left the craft. Would you mind commenting on the reasons that led you to abandon your production?
I always repeat the biblical phrase: “There is a time for everything.” As Frederico de Morais said on page fifty-nine of my exhibition catalog at MASP: “The feminine condition, sexual freedom and the new status of women in modern society, these and other issues had already been discussed exhaustively by Teresinha Soares.” After my last two ecological works [“The Circus and the Mountain” and the “Altar of Sacrifice,” both 1976], I completely stopped. But it didn’t mean that I became absent from the artistic calendar. This year I must hold two more exhibitions, one in Los Angeles and another in Belo Horizonte. As late as 1976, my five children were teenagers and I wanted to spend more time with them. We also acquired a farm in Ouro Preto so I decided to become a farmer. It’s a wonderful experience, by the way.