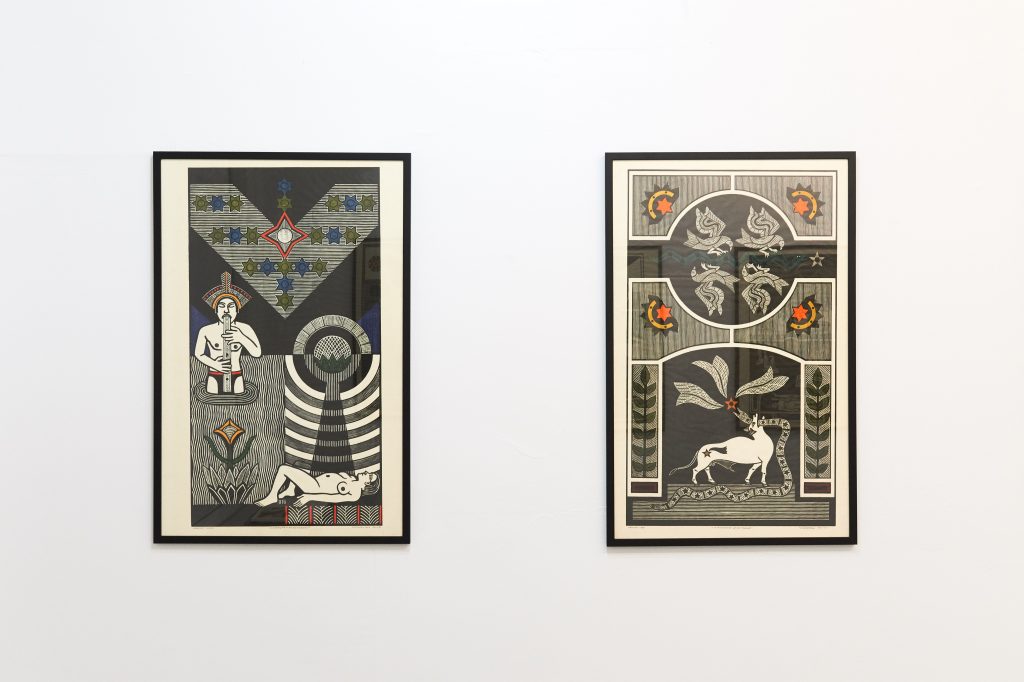 In the 1650s, a group of twenty-three Jews of Dutch origin left Recife, in Brazil, to join what would then be the founding of the city of New York. A few centuries later, in the 1970s, New York would wave back to Recife by including two works from that city’s native Samico in the collection of one of its most important museums: MoMA. Now, forty-seven years after that last event, the now-legendary Brazilian engraver, who died in 2013, is finally getting a solo show in the city. The exhibition “Samico Between Worlds—Rumors of War in Times of Peace,” curated by Marcio Harum and produced by Dream Box Lab, displays a set of fourteen engravings produced between 1997 and 2010. In order to bring the historical connections between the two cities and also the artist’s mystical and universal imagination to the local audience, the curator selected works whose symbols and archetypes could dialogue with characteristics of the city such as the river, the skyline and the island, as well as hiring a specialist to offer free tarot readings to the public throughout the exhibition.

Gilvan Samico was born in Recife, in 1928, and was an important exponent of the Armorial Movement, idealized by the poet and essayist from the state of Paraiba, Ariano Suassuna (1927-2014). With a social, cultural and political character, the movement emerged as a way of valuing and preserving the rich popular culture of Northeast Brazil, which had as one of its main expressions the Cordel Literature leaflets—narratives created by local inhabitants—illustrated with woodcut engravings. Therefore, this media, which in the hands of Samico gained great sophistication, has become an important symbol for the understanding of myths and legends that refer not only to the roots of Brazil but also to cosmologies about the formation of the world. “Please, understand me, I do not do illustration work, I am relying on a legend to build a new world,” the artist once said. Because of the universal dimension of his work, he became internationally known, having exhibited in more than 300 exhibitions in Brazil, including the last Biennial of São Paulo, and more than thirty countries highlighting the award received during the 31st Venice Biennale. We discussed this new exhibition with its curator, Marcio Harum. 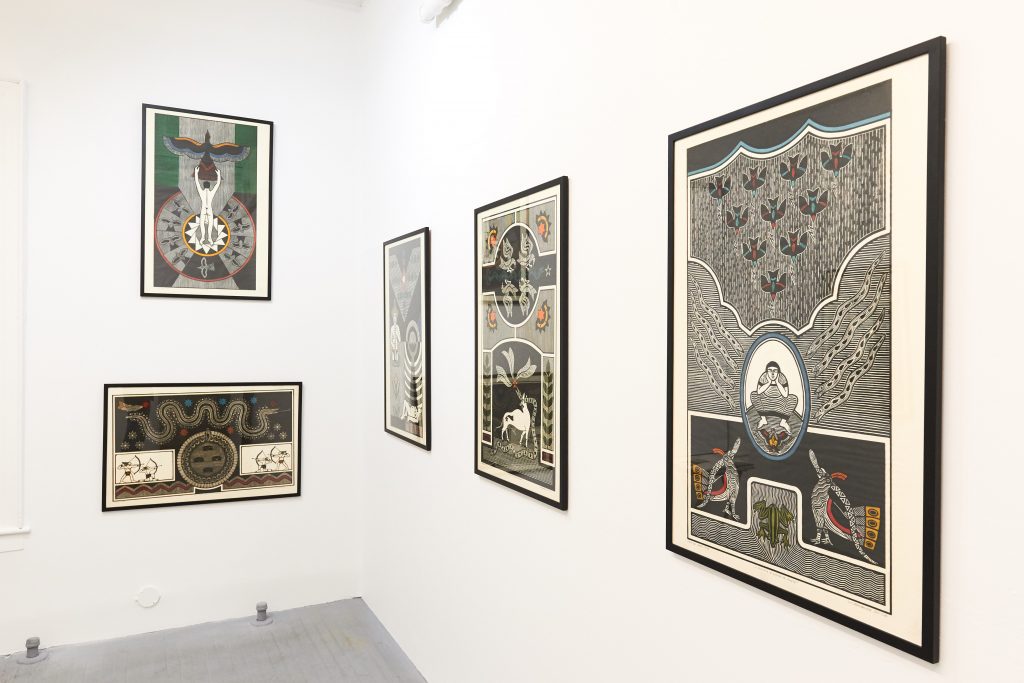 This is the first time that Samico’s work is shown in New York, right? How did you prepare the selection to introduce him to an unfamiliar audience?
Yes, this is the first exhibition in which Samico’s work is openly presented to the public of New York. But as MoMA acquired, in 1970s, two of his works for the collection department of drawings and engravings [“Suzana no Banho,” 1966 and “Batalha dos Anjos,” 1968], this reference fact gave us a certain tranquility with this show. The selection is inspired by a certain group of symbols and points of view related to the city of New York like “river,” “skyline,” “labor,” “island,” “ascent.” The city’s mental map, so strongly incorporated by the local audience, connects the visitors to Samico’s works creating visualizations that depart from the physical signs of the city itself that immediately arouses a sense of recognition and closeness.

You inserted tarot readings during the exhibition period. Was the tarot a starting point for your curatorship? Can you tell me a little about this idea and its connection with the works on display?
The tarot readings made by Dona Célida, Samico’s widow, was what initially triggered the desire to perform this exhibition. The thought that propelled the project was to observe and connect the timelessness and multidimensionality of a certain place in the city of Olinda and the metaphysical work of Samico, in a gap between the historical perspective of the arrival of the Dutch in Pernambuco, as invaders in the 1630s, and the later exit of the twenty-three Jews from Recife to what would then be the founding of New York in the 1650s. Yes, I am mentioning the same group that had previously taken refuge in Amsterdam, escaping from the persecution of the church during the Inquisition period in the Iberian Peninsula, and erected the first synagogue in the Americas in Recife. This is said so that the visitors feel in contact with the nature of this exhibition, since the exhibition room intuitively reflects the mood of the arrival of Samico’s works in New York during turbulent times. Back to the tarot readings: it’s a proposal for the public to connect to the enigmatic imaginary of the artist which is a way of clashing the public in participating or not in this experimental exercise of mediation, and that can lead them to a state between doubt of the unknown and an epiphany.

Samico’s works are full of mystical and archetypal characters from Brazilian indigenous legends and Cordel literature. In this particular show, you seem to have given greater focus to engravings with themes related to the sacred and to cosmology. Can you tell me a little about it?
The range of the works, from 1997 to 2010, covers a very prolific and meticulous time arc of Samico production. Here it is in the time of the perfection of his prints and the maximum improvement of qualities of the woodcut. The images created by the artist, during the Armorial Movement in the early 1970s, seem to return with more lightness and synergy. The illustrative woodcuts of Cordel leaflets were aesthetically assumed by the Armorial Movement—conducted by music, performing arts, visuals, literature and poetry—and based on an artistic identity of magical spirit and cultural roots, which sought in its source to blend elements of erudition to a pulsating popular vein based on the manifestations of the “sertão” of northeastern of Brazil. The subjects of the Cordel revolve around adventures, dramas and love stories, narratives of ordinary heroes, fantastic tales and terror that landed [in the country] orally by the medieval popular tradition originated in Portugal, and were preserved. What gets our attention so much in Samico’s craft undoubtedly seems to be its artistic management over the historical-visual memory through the centuries.

J. Borges, another great woodcut master influenced by the literature of Cordel, also a member of the Armorial Movement and contemporary of Samico, has also received important international attention. How would you differentiate the productions of the two artists?
I do not believe that it is important to differentiate one production from the other, but it is necessary to understand that both artists lived and worked in Pernambuco at the same time, influenced and inspired by Cordel literature and its graphic-visual aspects, which jumps from a single moment from a narrative, more regionalized, to a universalist knowledge. J. Borges was born in 1935 and Samico in 1928. I cannot be sure at this very moment if they developed a personal relationship or what they have talked artistically. Undoubtedly, it is a great subject to pursue with a research.

By Samico’s death in 2013, there was a boom of exhibitions about his practice, such as the inclusion of fifty-one of his works in the last São Paulo Biennial. We know that death always drives forgotten figures to the limelight of the media and the public, but beyond it and the apparent universality of his work as a whole, what do you think has aroused the public’s interest in him?
It’s perhaps this recent absence of his figure as a master engraver in the Brazilian contemporary art scene that the unconscious collective has come to bring him back for the excellence of his work. I think this question is complex and it would be too time-consuming to speculate about the spirituality behind the real motives that go beyond the deep crisis of ethics and morality that society, politics and the economy of the world has been facing most acutely today after his death. What I have to say as we come to finish our conversation for now is: let it bring other exhibitions of Samico in Brazil and in the world!

Samico Between Worlds—Rumors of War in Times of Peace
Curated by Marcio Harum
Through March 5, 2017
319 Grand Street, Lower East Side, New York