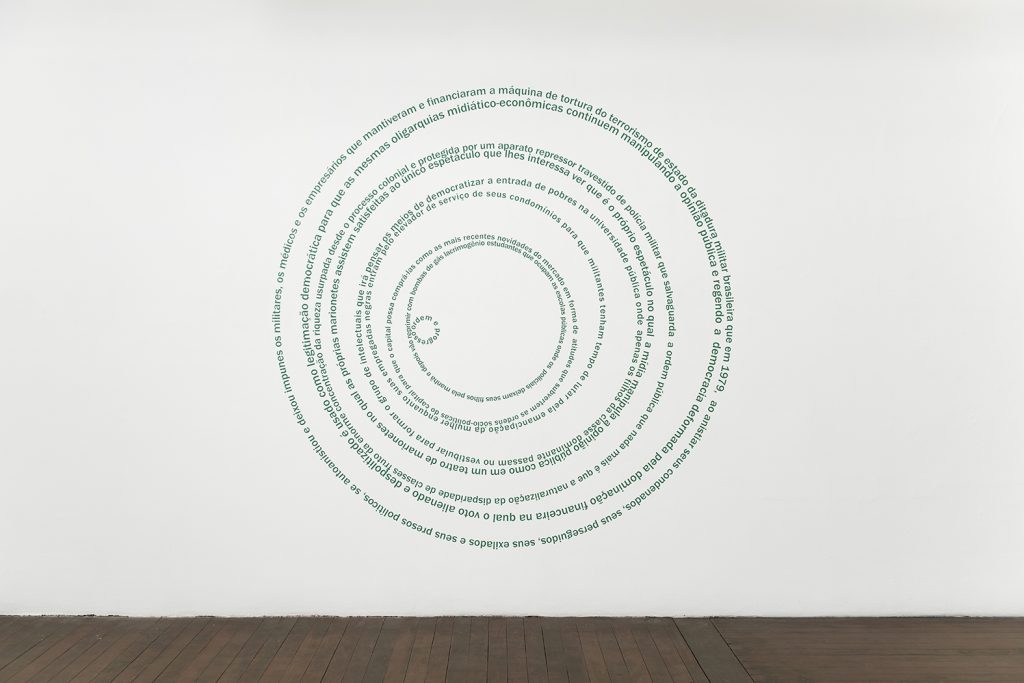 “Language and visuality are absolutely different codes, and I see myself mixing one with the other not with the hope of fusion, but rather to potentialize this shock, this short circuit, this friction, remembering that shocks, short circuits and frictions generate beautiful and dangerous lights and sparks,” says Fabio Morais. Born in São Paulo in 1975, Morais is a visual artist working on the complex and fruitful frontier between literature and the visual arts, using a variety of media such as serigraphy, photography, objects, installation, books and collage.

In “Escritexpográfica,” his sixth solo exhibition at the Galeria Vermelho, the artist presents twelve works that investigate the power and conflicts in discourse appropriated from political-social fragments found in such different sources as books, posters, newspapers, postcards, stamps and others. Fragments whose meanings he expects to be completed by his “reader,” each an individual constructor of meanings, narratives or counter-narratives. 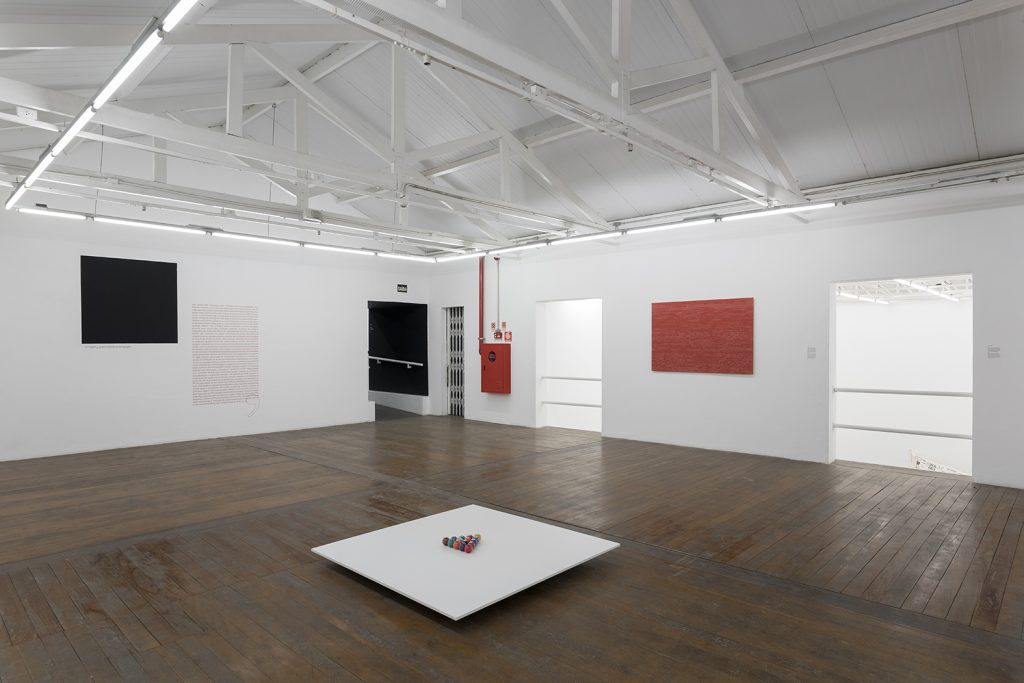 You perform writing on various media: serigraphy, photography, object, installation, books, collage, among others. Ever thought about performing it on your own body?
I’ve done it biased, conceptually through a fictional character I created, “The Performer,” or using the actual body in “The Imbecil,” which I presented in last year’s VERBO [Performance Festival]. But this is a very nebulous subject for me. Because many of those who influence me in writing, such as Artur Barrio, Yoko Ono, Vito Acconci, Dora Garcia, Flávio de Carvalho, Kenneth Goldsmith, etc., work or worked with body performance. I would not know much about it, because this is a sensation rather than a rational certainty, but I feel the text is a body in itself. No doubt everything I write I see more as a body, and therefore performance, than concrete textual architecture, so I find it more challenging to perform the body of my texts… than my body. 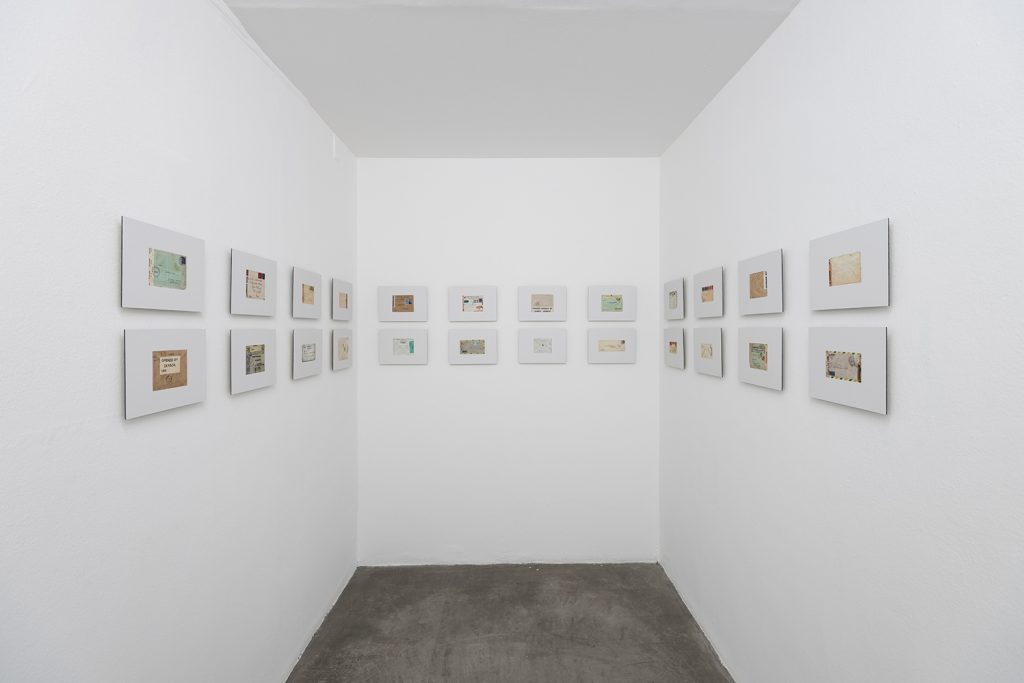 Thinking about the works “Imagens” [titles of images found on the Internet through searches for terms linked to social conflicts] and “Blood” [the word printed on a background composed of a textual mesh formed by the repetition of the pixel] reminded me of Lucius Flavius Philostratus when he stated that “every word is potentially an image and every image is potentially a word.” Even though this may be true, there seems to be an inevitable chasm, a tension between word and image. Do you agree?
I’ve never read Lucius Flavius ​​Philostratus, but I think so, that’s it, inside that thing that sometimes we read something, a philosopher or a theorist, and think: but I had already perceived or felt it through art, just not had verbalized or organized it in the speech. I really like a statement by Marcel Broodthaers in which he says—I will not remember exactly the words but the idea is more or less this—that he did not try to join literature and visual arts, but rather to work exactly on the border that separates the two. I think this is a bit the nature of my artistic practice. I feel the insoluble separation between the linguistic and visual codes and it is what interests me, not the attempt to overcome it. Language and visuality are absolutely different codes, and I see myself mixing with one another not with the hope of fusion, but rather to potentialize this shock, this short circuit, this friction, remembering that shocks, short circuits and frictions generate beautiful and dangerous lights and sparks. I do not believe in essence, still less in purity, and I flee from formalisms, so my place of work is this contamination, which may be dialectical and so I end up always working in the area of ​​the third meaning generated by the shock of the other two, the word and visuality. 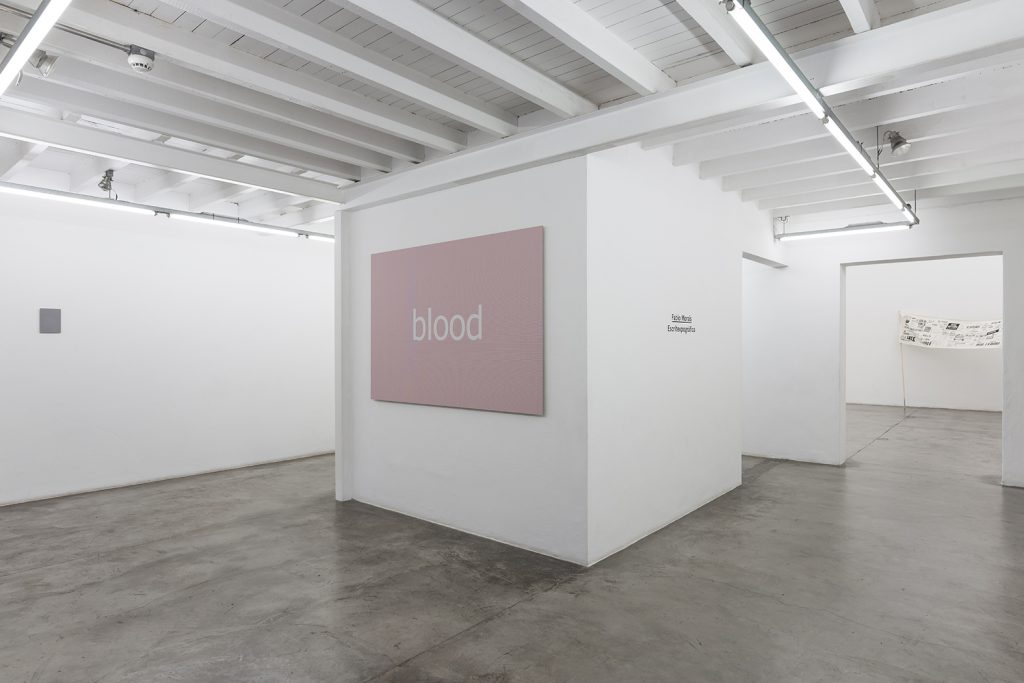 You have appropriated fragments of politico-social texts from books, posters, newspapers, postcards, stamps etc from different decades. Although phrases such as “Aquitáfoda” [approximately “Here’s a Shit”] and “Ditadura fora de época” [“Out of Time Dictatorship”], present in the work “Manifestação” [Manifestation]—six serigraphs on fabric alluding to flags—reveal a personal malaise, I could not identify any phrase related directly to the grotesque speeches of the power that is unfolding now. Why?
In this particular case, all statements are appropriations of other artists’ works. I have been researching this for a few months, and none has directly reproduced a current issue, in a more illustrative way, talking about the coup we suffered, the current hate culture, or about Donald Trump. But, anyway, I would avoid this direct reproduction. I believe that the direct speeches are already on the street in the political struggle, where I insert myself and claim as a citizen. In the field of art, I believe that a “LUTE” [fight] or a “SE VENDE” [for sale] or a “A pureza é um mito”  [Purity is a myth] or an “Aquitáfoda,” by the subjective bias of how these statements unleash something in who reads and create symbolic and metaphorical personal value, can be far more effective than a “FORA TEMER” [Out Temer], powerful, vital and necessary in the current political struggle, but perhaps weak in the field of art. Not that language, or language research, should not allude to factual political issues, but—I do not know if I could explain why—I feel that a LUTE, which is a subjective and too-open agenda to be used as a slogan in a political manifestation, is absolutely objective in the field of art. Perhaps this is because in this field the expression is completed in the reader, in the particularity of the reader, it is he who will construct something for himself with the word LUTE, instead of receiving it as a closed meaning. Anyway, I do not know if I answered your question—it is a difficult question, more of doubts than certainties. 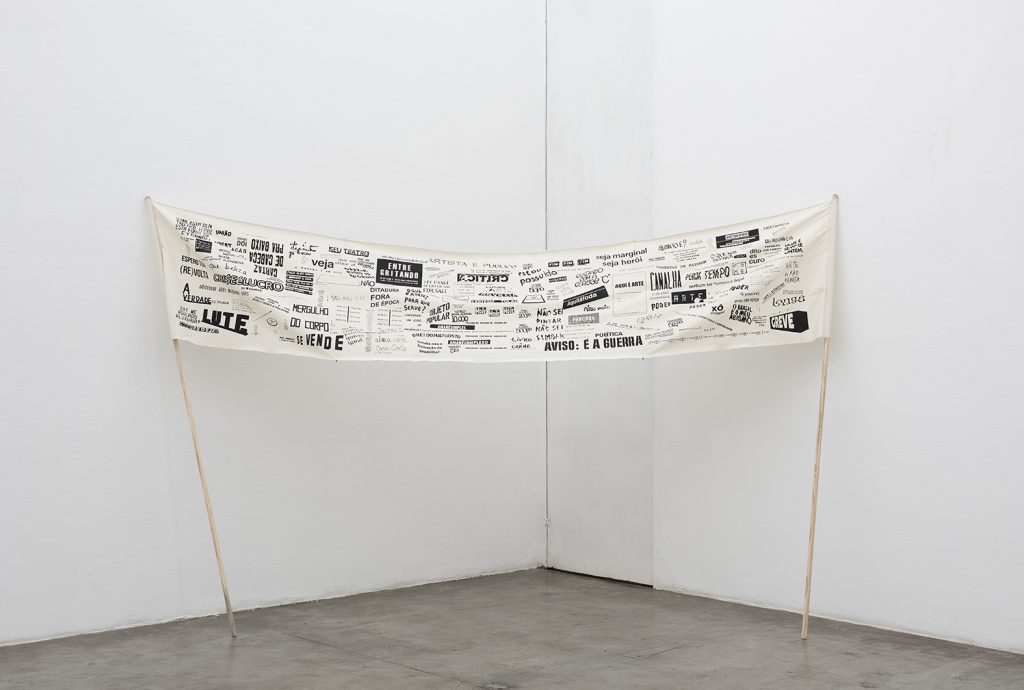 In general, the motto of the exhibition reminded me of the emblematic image of the gagged slave Anastasia, which was used at the installation of the Portuguese writer and artist Grada Kilomba at this last Bienal de São Paulo. This image denounces the absence of the word in a subject that has been historically silenced by colonial and hegemonic narratives. Whoever has the word has the power, so to speak. Can you comment on this?
I think that more than “who has the word,” whoever establishes the narrative has the power. It is in this key that, of course, I do not believe that art changes the world, but it can always establish counter-narratives for yesterday, for now and for the future, which is a way of writing history. Of course, whoever has the power writes the history. And History, with a capital “H”, contains a lot of things and a lot of people. When I was a teenager, my books of OSPB and Moral and Civic Education talked about the 1964 Revolution. But it was in listening to [the singer] Chico Buarque and absorbing what he was saying that I understood what had been the civil-military dictatorship. It is in this sense that I think that art does not have the power, but it can claim the word and construct the counter-narratives. 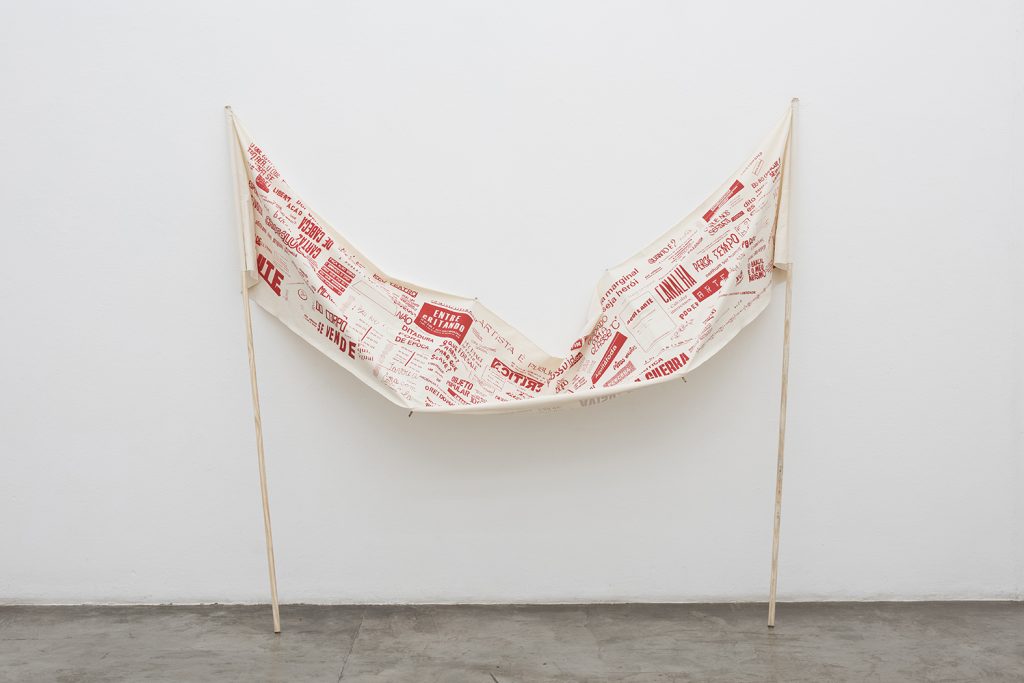 The Russian thinker Mikhail Bakhtin encourages us to inhabit the boundary, threshold and act within the polyphony, the discordant voices that postulate a world in continuous metamorphosis in the “eternal unfinished existence.” Is the practice of polyphony more possible in the visual arts than in literature?
I think so, it is more possible in the visual arts. But I am an artist and as much as I write, my way of thinking is that of a visual artist. I will never have the literary experience, so that my statement can be, and certainly is, biased. But what makes me think that yes, in relation to polyphony, is that at least for me each work is born in a language that I only notice when it is being formatted, that is, unlike the writer, whose work is born to be text, in my case an artwork will become photography, installation, text, book, object, ready-made as it materializes, and often surprises me. That is, at the very center of creation of the visual artist, the polyphony of medias is installed as a ground, and than working with the polyphony, or cacophony, of the world is perhaps more than natural.

From the crisis of the verse announced by Mallarmé and the subsequent artistic resumption of the use of the word through concrete poetry that, using the new electronic technologies, explored its nonverbal dimension, the word has been recycled and experimented with by artists, writers and musicians. What do you believe to be the frontier of the word in the visual arts today?
I do not think there is. The field of visual arts is exactly the one that, since Duchamp, has been declared as international waters, where it is possible to experience everything with absolute freedom. Even the field of visual arts still has the courage to build theories, perceptions and critical parameters at the exact moment of artistic experimentation, practically along with it, so that I really think there is no limit. 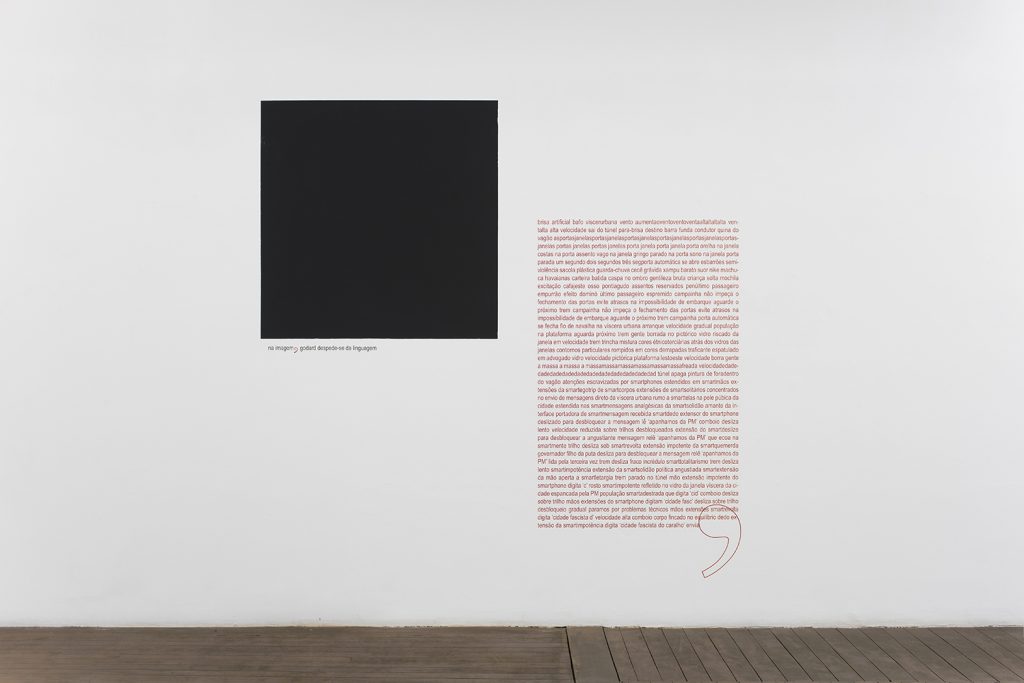