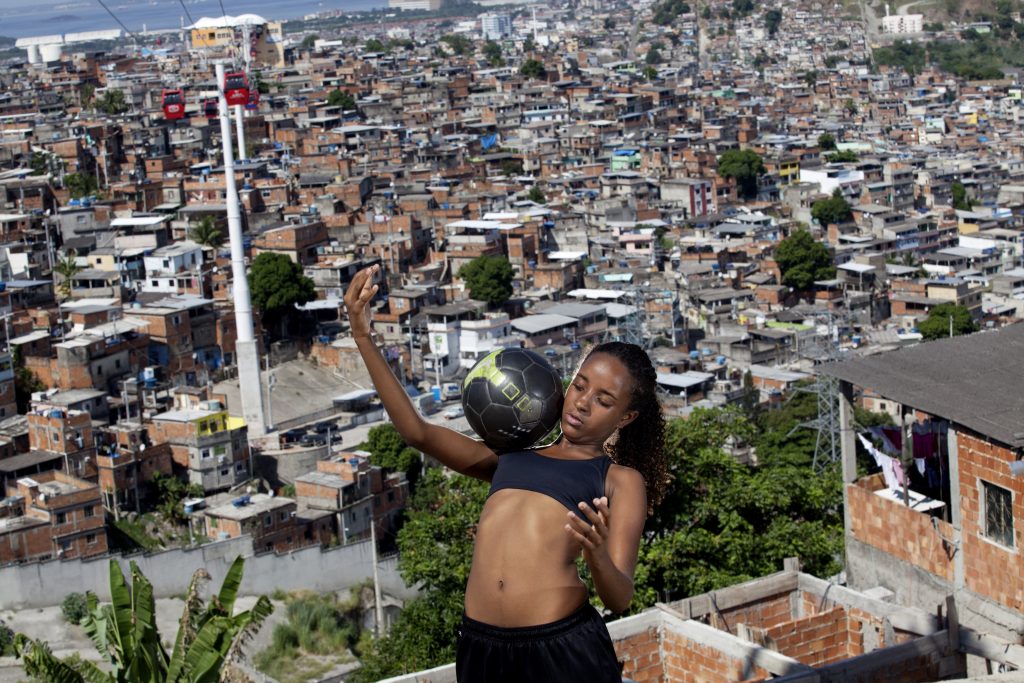 The show “Body discourses: (the vertigo of Rio)” at the Museu de Arte do Rio (MAR) welcomed me as if a wave of sensuality had clashed into my body. Visiting the show wrapped up my experience of being in Rio just after the Olympics: it was as if I could feel the fragrance from a mixture of pleasure and excitement that remained in the air in the aftermath of the event. Seeing the recently inaugurated Museum of Tomorrow at Praça Mauá, just across MAR, and the new light-rail train crossing downtown on its way to the Santos Dumont airport, was acknowledging that a long process of urban planning had finally become a reality: a vibrant open space that many cariocas and tourists seemed to celebrate. But, as with most of the multiple realities that somehow co-exist in Brazil, there are always two sides of the same coin. As I strolled towards MAR, I remembered I was actually stepping on gentrified soil: Praça Mauá, and its harbor zone, was a famous red-light district, and the area of the Museum of Tomorrow was traditionally known for prostitution and ruined buildings––some of them now demolished to give way to the cariocas’ Tomorrowland.

It is through a similar paradox–of Rio as both a city of glamour and decadence–that “The Vertigo of Rio” drifts, moving closer to its visitors’ bodies. When I entered the show, I thought of an exercise: to compare the realities depicted in the works with the sparkling eyes of the middle and lower classes taking selfies at the “#Olympic City” sign, just outside MAR. There everything was clean and fresh, while in the show I could see the people who live in the communities of favelas, those who are often the target of the middle-class’ prejudices. If they have been washed away from the area due to gentrification, in the museum, at least, they were still stars: funk and hip-hop music was playing, and images of prostitutes, transgenders, drug dealers and grafiteiros all made appearances. Politics was all embedded in the show: the curatorial project is both critical of the sociopolitical contradictions found in Rio, but at the same time welcomed these ambivalences. As curator Paulo Herkenhoff said about the exhibit, “In Rio, in the same way that there’s love, there’s hate; it is a city that cannibalizes itself, that doesn’t hide its body, its desires, neither its evils.”

The flesh, the malleability of Rio’s living bodies acquired a political dimension through works that showed them moving, balancing, swinging and often losing balance too. The body in peril, the body-precarious, the bare body that “craves for,” the power of the skin, of bones, and muscles were all ideas that slowly occupied my mind, as I walked along the different niches of the show. The atmosphere of the exhibition evoked a spectacular viscerality that I always miss when I am away from home: the gallery’s walls were painted black and the loud sound of different video works mingled continuously, while moving images projected on TVs or wall screens danced in silence. In the middle of the room two installations distributed the rest of the gallery’s space in different niches, separated by temporary dividers onto which some of the videos and photographs were also projected. 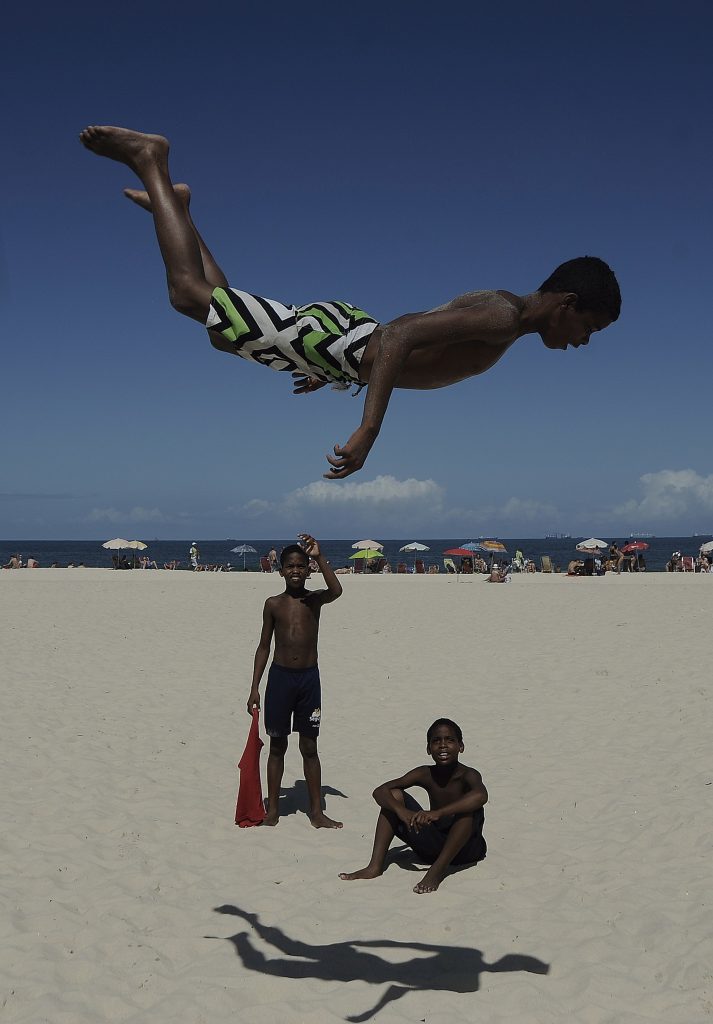 “The Vertigo of Rio” is divided into eleven sub-themes such as “Cosmopolitan Bodies and Places,” “Voracious Bodies,” “Cordial Man,” “Afro-Descendant Cinematography,” and “Collective Bodies.” These themes convey Rio’s history through an amalgam of bodies. Rio’s racial formations and notions of place are discussed, for example, in the “Afro-Descendant Cinematography,” with photographs showing practices such as capoeira and umbanda. These images point to a Rio that, historically, was one of the largest ports in the Atlantic slave trade of the eighteenth century: at least sixty percent of the four million slaves that entered Brazil arrived through the city.

In “Voracious Bodies,” stunning portraits by photographer Vincent Rosenblatt show the black and erotic bodies of the funk culture in Rio. Under the same sub-theme, a video-performance depicts a baile funk while playing with the historical notion of anthropophagy. In the work, under a loud and hypnotic rhythm, funk dancers move their hips over burning dummies’ body parts in a barbecue party, mimicking famous scenes of indigenous cannibalism registered by sixteenth-century artist Theodor de Bry, during colonization. Two of de Bry’s original engravings can be also seen in the show. These different themes steered in my mind shifting definitions of the carioca body: fluctuating from the body that makes samba, in the “The telecoteco Body,” to the active bodies playing sports on the beaches, seen in “Water Bodies;” to the male, female, or transbodies that swing with desire, such as in the touching and sexually alluring work “Cais do Corpo” (2015) by artist Virginia de Medeiros. 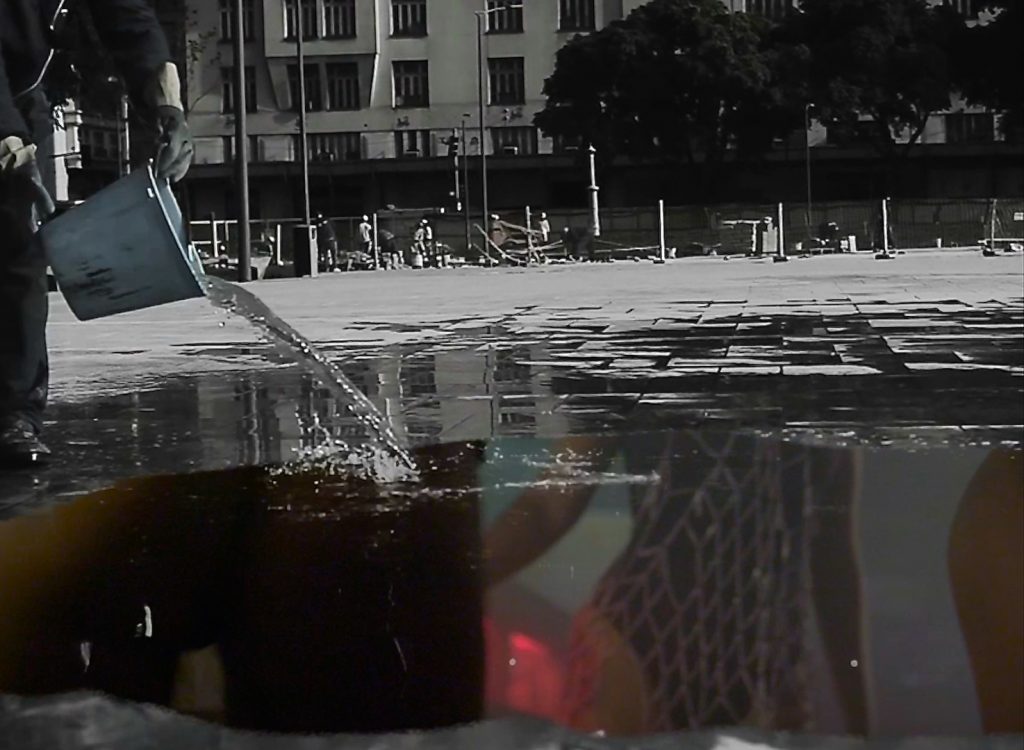 “Cais do Corpo” by Virginia de Medeiros/Courtesy of the Artist

The video starts with janitors washing the pavement of Praça Mauá, while we hear a woman’s voice–the artist’s–repeating the words of a prostitute she interviewed at one of the remaining nightclubs in the area–the rest had been demolished for the square’s overhaul, before the Olympics. While we hear her voice, prostitutes’ semi-naked bodies dance and swing around and up and down poles, under blue and pink neon lights. Some have their bodies mutilated, at the same time that they are beautiful, and magical. The voice says, “Prostitution is legitimate. Whores have power in a country dominated by machismo that is anchored in ‘the docks of the body.’ In the past, this was all sea. One day, this entire area will sink: the sea will come back. This square smells like blood. Museum of Tomorrow? Everyone now only care about the tourists. I care about today!”

In “v.a. 4598” (2016), a video by the artist Igor Vidor, another tension with the Olympic Games appears. Vidor visited the houses of Vila Autódromo in Rio, a poor and small community of 700 households that struggled against displacement due to the construction of the Olympic Park. The artist performed Olympic weightlifting in the houses, during each visit, thus creating a metaphor for the burden those people had to carry to keep their houses, at the same time that the artist comments on the conflicting legacies of Rio as an Olympic city.

Other works showed the melancholy stemming from tragic events that have occurred in the city, such as everyday massacres in favelas. The powerful “Outrage Against Power” (1992) is an installation by artist Rosangela Rennó: it is made of a Plexiglas panel with fourteen tiny black-and-white images of male corpses, who seemed to have been violently killed. The artist copied images published in Rio de Janeiro’s newspapers, while the city hosted the Earth Summit (1992). She placed these images on the floor, leaning onto the panel, and numbered them, installing a green light behind them, creating a gloomy atmosphere: a quasi-altar, a somber gesture of remembrance for those deformed bodies.

From slender, gorgeous, moving bodies, to disappearing, vulnerable bodies, in only one gallery curator Paulo Herkenhoff and co-curator Milton Guran displayed around 820 works that represent the city through its flesh. Their great accomplishment is mostly due to the fact that not all works have their own place on walls. Most of the artworks included in the show can only be seen in slideshows on screens. That solution to a lack of wall space was immediately uncomfortable to me, perhaps because as a museumgoer accustomed to American museums, my body and my eyes have been trained to acknowledge each work’s individual space. In “Body discourses: (the vertigo of Rio)” that “breathing space” of each work is crushed to a minimum and only a few artworks receive the individual attention of the viewer. Although an uncomfortable sensation at first; later, it was as if I was strolling along the streets of every other Brazilian city.

Nonetheless, for the most part, those dozens of beautiful and poetic photographs and videos were lumped together in screens, even though they were thematically grouped. I noticed a curatorial strategy that was new to me: transition effects were used in slideshows so that steady photographs were actually moving: the picture of a black boy’s slender body, wearing bright green shorts and spinning on the beach, for example, received a 360-degree rotation effect, before fading into the next image. These effects were intentional mediations; images categorized under the theme “The Ball,” in “Water Bodies,” depicted people playing sports (so characteristic of everyday life in Rio); then, quickly, the camera would zoom in and out, focusing only on soccer or beach volleyballs. Those transitions created a narrative between the images, as if they had become a single work. It was a completely different experience than it would have been to look at them as individual photographs on the wall, and I only wondered if that was good or not.

Other curatorial decisions invited the physical bodies of visitors to enact different modes of spectatorship and to dialogue with the bodies in the images. The installation in the very center of the room was a mountain made of white nylon sacks onto which we could jump over to watch the slideshows. I eagerly decided to lie down, as if I were in an Hélio Oiticica’s piece (who actually appeared in some of the photographs in the show). I looked at a screen pending from the ceiling; I saw a first-person-mode video by artist Kadu Ori, filmed upside-down, in which he illegally climbs the Central do Brasil building to paint its clock with graffiti. It took a while for me to understand where the person was, but as the camera zoomed out I could see the tiny cars running way down below on the streets. I let my body absorb that incredible act of dexterity. In a time when our bodies and our images become confined in smartphones and screens, even while lying down I could feel the vertigo of the city traveling into my eyes: all the freedoms and the tragedies of embodying Rio.