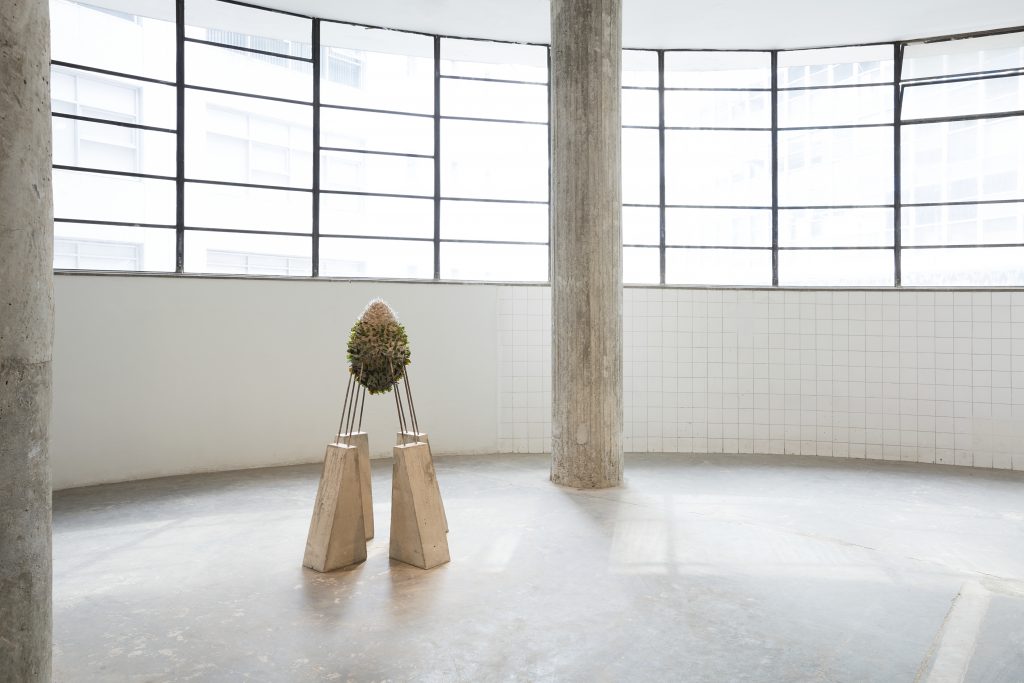 Entering the exhibition space, I’m faced with an ovoid form of reinforced concrete studded with broken glass and supported by blocks. This elusive and sterile egg—a 1982 sculpture that was rebuilt especially for this exhibition—prepares us for what is to come: gross forms that would be the antithesis of what the critic and philosopher Eduardo Jardim defined as tactile art just a few years earlier, in 1979.

The critic Paulo Sérgio Duarte had a similar experience in 1981 when he faced a work from the same series by Ivens Machado (Florianópolis, 1942 – Rio de Janeiro, 2015) during the Biennial of São Paulo. Experience that he defined this way: “[The piece] highlighted the raw materials and labor, with the form sacrifice that common sense expected but it was far from being amorphous (…) If we could reduce it to raw / cooked opposition, we would be in the world of raw forms. But in a perverse rawness, inverted, because unnatural, calculated, chosen in its details, to sign up as a denial, the precise forms inherited territory of constructivism.” 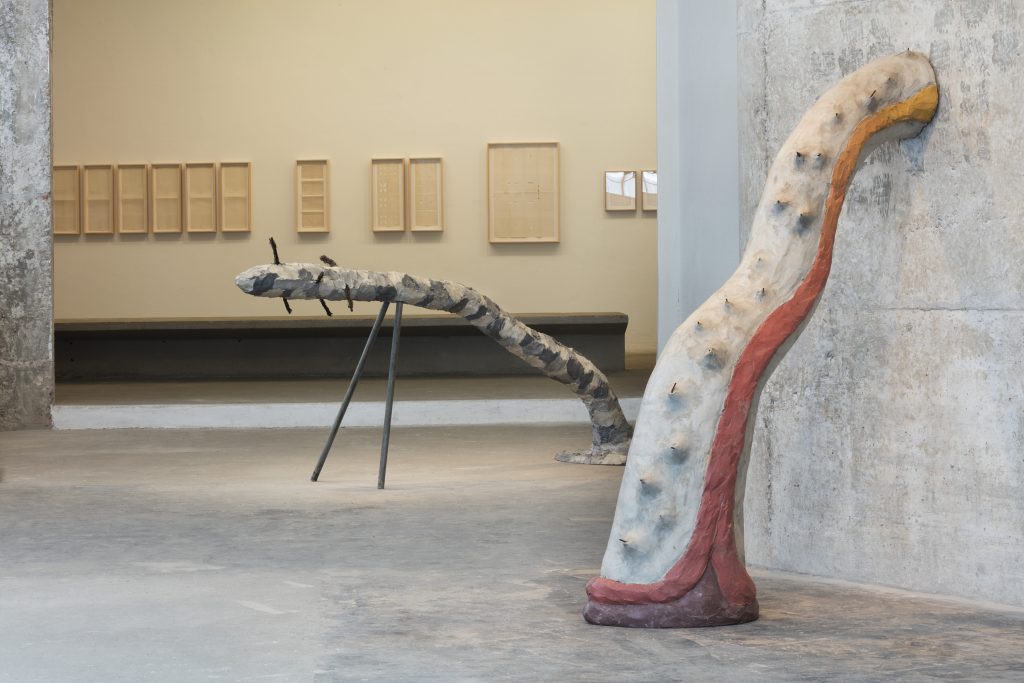 Taking this excerption as a starting point, the curator Kiki Mazzucchelli organized the exhibition “O Cru do Mundo” (The Raw of the World), gathering a group of twenty-two works (sculptures, drawings and videos) from a trajectory of almost five decades that evidence the issues Duarte and other critics saw as the symbiosis between social and sexual tensions, the inversions of the logic of power, the denial of constructivist heritage and the transgression of the norm. The show is part of Pivô’s program “Fora da Caixa” (Out of the Box) that revisits works and past artistic projects to not only examine their influence today, but to explore the ways the past, present and future of art making relate.

There is a clear symbiosis, mainly in the type of material, between the works of Machado and the brutalism of Oscar Niemeyer’s 1950s-era Copan building where Pivô is headquartered. Erratic works seem to sprout from heterogeneous floors and from the winding walls, such as a 1998 work in which the exposed rebar and reinforced concrete resonate with the surrounding tiles, and another one from 1985 where a cylindrical, irregular and organic shape seems to actually immerse into one of the large beams. Architecture and sculpture interpenetrate each other aggressively and erotically, oscillating between attraction and repulsion. 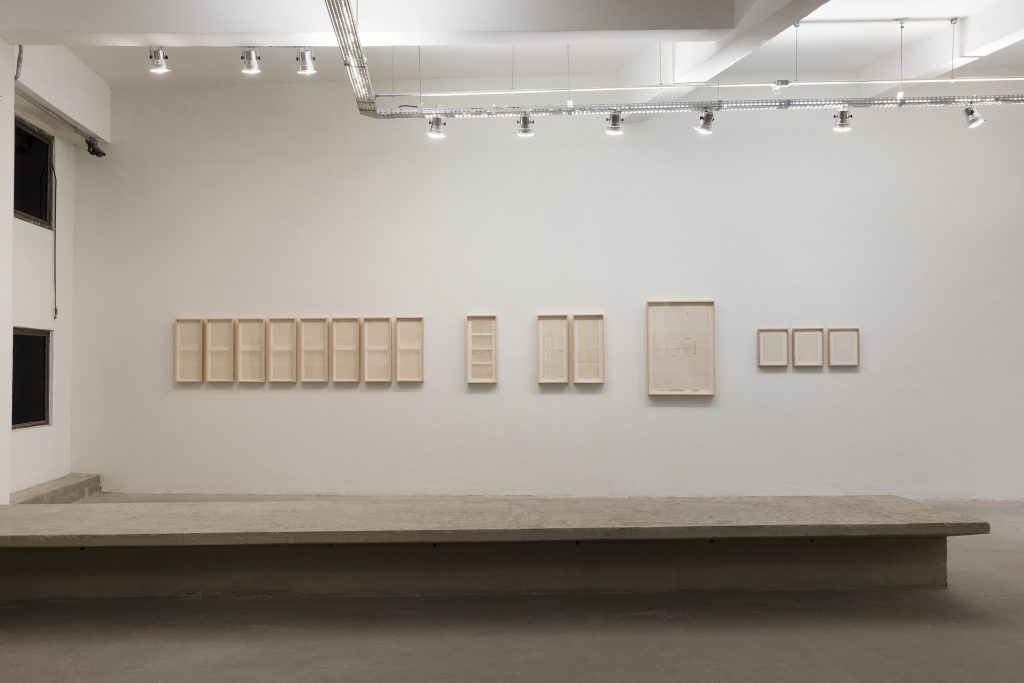 There are also the drawings, made between 1970 and 1980, where the artist intervenes in notebooks’ ruled lines, sometimes scratching them with pen, sometimes burning, distorting or breaking them. These works show more clearly the rupturing of the norm, one of the characteristics of his work. Others claim a “perverse rawness,” borrowing the concept coined by Duarte, as in the 1998 wall piece supported by a steel cable that resembles a a tongue that sprout thorns. The piece vibrates impotent and lacerating sexuality and reveals a certain cruelty inherent in the primary nature of things.

I talked with the curator Kiki Mazzucchelli to further examine, in Duarte’s words, this “rawness that digests the constructivist heritage” or, as Milton Machado puts it, these forms that are “almost-architecture” and that “if they were plants, would be carnivorous ones.”

How it was working with the estate of the artist?
It was hard because it was locked in a shed. No one knew what was there because it is being cataloged only now. Monica Grandchamp [responsible for the artist’s estate] won a Funarte award last year to do this because it was abandoned for so long. Ivens went through a difficult financial period and could not pay the rent on this shed, then the works did not receive proper care.

Why this exhibition now?
I’ve always been a fan of Ivens. In 2013 I organized a small exhibition at the Silvia Cintra Gallery in Rio de Janeiro and on the I occasion invited him to participate. So we ended up knowing each other. After he died [the artist fell from a ladder in May 2015 at the age of seventy-three and succumbed to injuries], Fernanda Brenner, director of Pivô, and Marcia Fortes [from Galeria Fortes Vilaca] invited me to curate it. They wanted a young curator who had a different view, and as they knew I had worked with him, they decided to invite me.

Tell me about the research for the realization of “O Cru do Mundo.”
The starting point was mainly the publication “O engenheiro de fábulas” (The fables engineer), which is very complete, organized in 2001-02 by Ligia Canongia to accompany the exhibition of the same name that went through Rio de Janeiro, São Paulo and Curitiba. But information, such as the location of works, was outdated because it is a fourteen-year-old publication, so there was an intense process in this sense, to do all this survey, which is a small part of something that Monica is making in a much larger scale. We started this discussion last year, totaling now a year since the beginning of the process. It is rare to have this research time in Brazil. 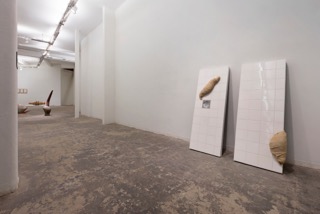 What is Ivens Machado’s influence on contemporary production? Can you name a few artists?
He is considered one of the first artists to work with the popular construction materials such as concrete and rebar, very present elements in the production of a new generation of artists working systematically with this type of material such as André Komatsu, Marcelo Cidade and Lucas Simões. Another example is Adriana Varejão, whose influence is declared by the artist herself. One might even think that the principal has nothing to do with it, but if we take the Machado’s work “”Cerimônia em três tempos” (Ceremony in three times), 1973, an installation with square shapes on the floor and a hanged piece of meat, we note that this dialogue is evident. There is also a visible viscerality on both of them.

Can you tell me about the first ovoid work we see when entering the show? Why start with that?
It is a work that had been destroyed and that is part of a series he began in late 1970. The idea was to have at least one sample of this body of work. We opened the exhibition with it because it is a work that we put in the world again. And it relates to the works that come next, which are the 1980s and early 1990s sculptures that already bring the apparent rebar, reinforced concrete, etc.

What was the conceptual approach for the works’ selection and installation within the space?
The main approach was the norm’s rupture that drives his practice. The exhibition is organized around groups representing his start in the 1970s that includes the use of tile, drawings and videos that define a type of approach that will go through his entire career. The drawing is perhaps the most obvious because he sees the ruled notebook as a normative instrument of knowledge. A similar procedure takes place on the tile: there is this hygienic and orderly surface whose geometric rigor is also interrupted. And there are three videos made in 1974, of which two are on display, where the sexual factor is evident. One of them, “Versos” (Verses), played by Ivens himself and another man, was censored at the time because of its allusion to the gay kiss. On the back wall are the videos “Escravizador / Escravo” (Slaver / Slave), 1974 and “Paranóia,” 2008, which are heavier. These works are open to multiple political and social interpretations. In short, all these supports resume the issue of the norm’s transgression and although it is not a pamphleteer work, it carries social information due to the use of raw materials of poor housing and an open sexuality, exposed, like the work “Consolador” (Comforter), 1979, which everyone knows, and that is a big studded broken-glass dildo that breaks with the idea of its original meaning, its function.

Did you consider bringing the “Consolador” or even the “Mapa Mudo” (1979), another well-known work for the exhibition?
I thought of bringing this and other work with broken glass but then, after watching the documentary about him that you can see at the end of show, I heard him say that the maps series had already travelled the world and it looked like he had just done this work in his life. So I thought to show other things, taking out the emphasis of a particular period or material to provide the audience a greater dimension of his complexity.

Anything else you’d like to add?
Because he is a historical artist with little content available and there weren’t resources for a catalog, I decided to ask for some authors permission [including Paulo Herkenhoff, Fernando Cocchiarale, Milton Machado, Paulo Sérgio Duarte] who wrote important essays on him and gather these texts in a booklet that is available for consultation on the show next to the documentary. There is also the option to download it on Pivô’s site. It is a cheap and efficient way to share this rich content with people.