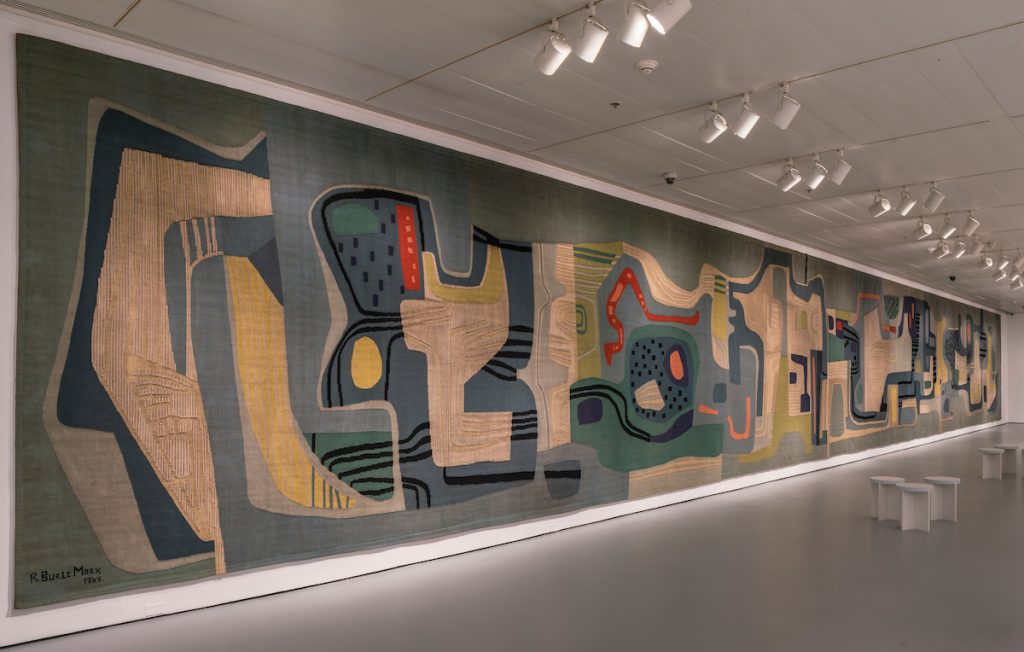 Back home, Brazilians plunged into a political and economical crisis, marched on the streets—with or against the Olympic torch—and amusingly complained about a fifty-five-degree-Fahrenheit “chilly” winter. The level of hostility between right and left has been so high and the changes in politics have happened so fast that, from abroad, I could hardly follow the news on protests, scandals and their effects in contemporary art made in Brazil. While awaiting my forthcoming trip to the country, I kept track of art shows that presented Brazilian artists across the New York area, under a crushing heat dome. It kept me busy, and melting.

This summer, numerous New York art institutions featured Brazilian-born artists, yet, and again, they were mostly absent from large museums, such as the MoMA or the Guggenheim which, in the past summers, organized historical exhibitions with intense Brazilian presence: in 2015, MoMA featured Brazilian architecture in “Latin America in Construction” and, in 2014, it organized Lygia Clark’s retrospective “The Abandonment of Art.” The Guggenheim included many contemporary Brazilian artists in “Under the Same Sun,” also in 2014. But if Brazilian artists weren’t seen in large institutions, they invaded art galleries and medium-size art spaces across New York. The two most impressive exhibitions in which Brazilians occupied center stage were the shows “BASTA!” at the John Jay College’s gallery, and landscape architect’s “Roberto Burle Marx: Brazilian Modernist,” at the Jewish Museum. 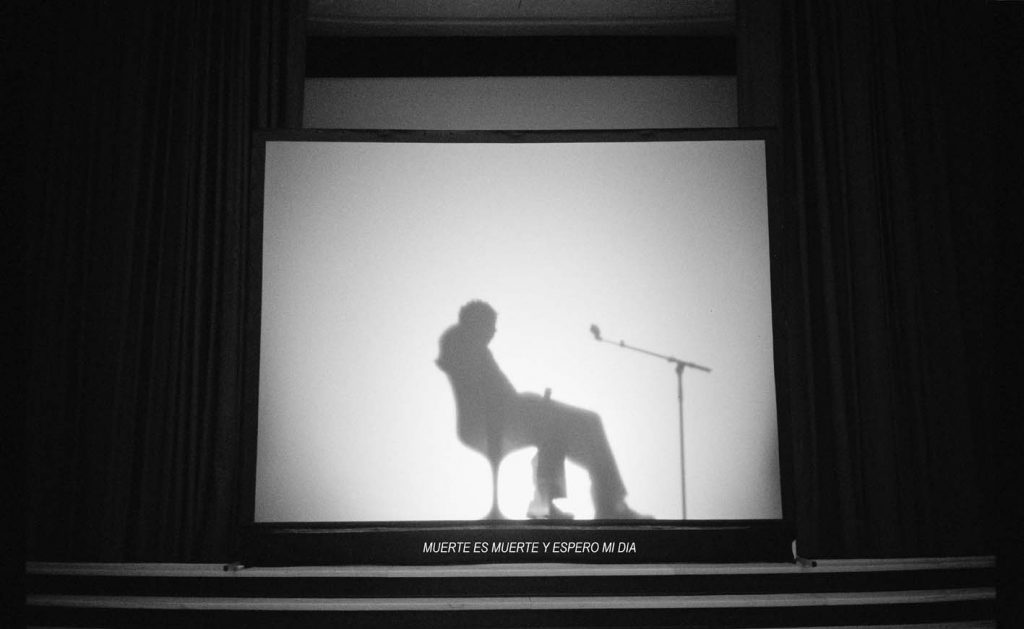 “BASTA!” co-curated by Brazilian-born art historian Claudia Calirman, had violence as its main theme, depicted in stirring contemporary artworks from all over Latin America. Although for Brazilians and neighboring countries the topic needs no introduction, many artworks disclosed to the American audience the contradictory dynamics between developing and developed worlds, such as the documentary of the performance “Testimonio” (2012) by Guatemalan Aníbal López (1964-2014). The video shows an anonymous sicario, a mercenary who López brought from Guatemala, answering questions from an audience of mostly white European participants at dOCUMENTA 13 in Germany, probably breaking one or two international laws. “BASTA!” also featured carioca Alice Miceli’s series of photographs “In Depth (landmines)/Colombian Series” (2015), in which the artist had access to land-mine fields in Colombia, taking calculated risks to capture those images. Paulista Marcelo Cidade displayed his series “A___________ social” [The social ___________]” (2015)—pixelated black-and-white photographs of failed home-intrusion attempts borrowed from the Internet. 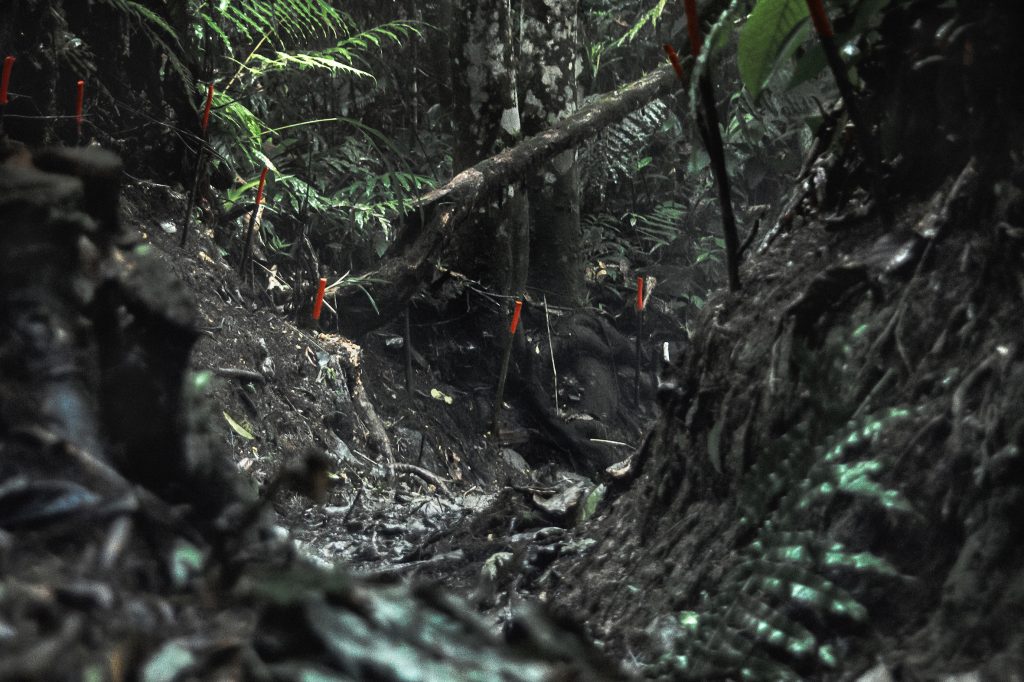 Whereas “BASTA!” exposed contradictions ubiquitous across Latin America, emphasizing multiple “realities” related to violence, “Roberto Burle Marx: Brazilian Modernist,” his first major retrospective in the U.S., felt nostalgic. The exhibit occupied two rooms of the museum’s ground floor and showcased about 140 works, ranging from original Burle Marx landscape designs to figurative portraits, designs for jewelry and sculptures, and a nearly ninety-foot-long wool tapestry which travelled from Santo André, Brazil. With so many objects, the exhibition could well have been expanded to an entire floor, which would have given space for more information about the architect’s process. Nonetheless, curators succeeded in magnifying Burle Marx’s modernist ingenuity beyond his practice as a landscape designer, without losing sight of his inspiring forms and visions for nature in Brazil. 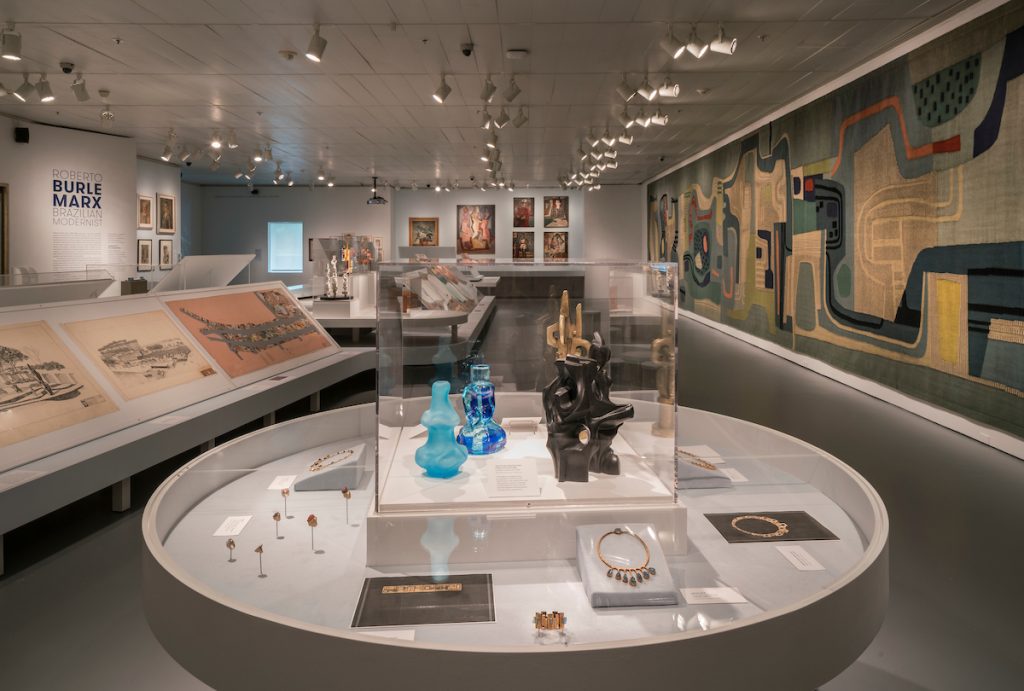 Although, as a Brazilian, I thought nostalgia permeated the show, a puzzling video by artist Dominique Gonzalez-Foerster, “Plages (Beaches)” (2001), filmed at the Copacabana seashore pedestrian areas—one of Burle Marx’s most iconic projects—brought me down to earth. It was shot during 2000’s New Year’s Eve party, when thousands gather on the Copacabana beach to see one of the largest fireworks spectacles in the world. Gonzalez-Foerster filmed the event from above, focusing on fireworks’ smoke and darkness, conveying a creepy atmosphere: instead of letting viewers grasp the beauty of Rio de Janeiro and the joy of the actual celebration, you see mostly darkness and night lights, as if a horror movie was about to start. Funny testimonies from Burle Marx’s acquaintances are heard in the background, emphasizing contradictions about life and urbanism in Rio de Janeiro. The video left me wondering how it would have been to see an exhibition that investigated the paradoxical legacies of Brazilian modernism. 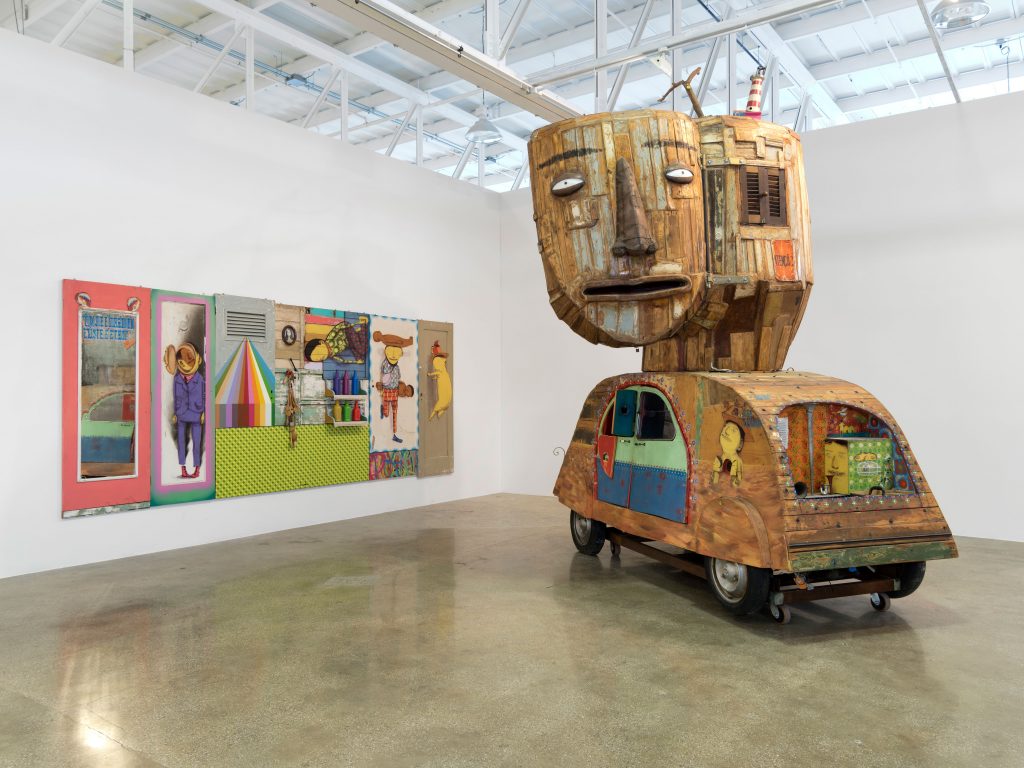 Os Gêmeos, “Within the Rainbow, That’s How it is” (2010) and “Untitled” (2008). “Everything You Are I am Not: Latin American Contemporary Art from the Tiroche DeLeon Collection.” MANA Glass Gallery, Jersey City. Courtesy: MANA Contemporary/Photo: John Berens

But there was more Brazilian art to see, and it was in a private institution that art enthusiasts could find the highest number of Brazilian artists’ works per square foot even though one had to cross the Hudson River, towards New Jersey. First assembled in Miami, “Everything You Are I am Not: Latin American Contemporary Art from the Tiroche DeLeon Collection,” at the huge MANA Contemporary complex in Jersey City, showed mostly installation art from sixty Latin American artists. Ten different “zones” divided a 50,000-square foot high-ceiling gallery, in which artworks were mostly grouped by aesthetic likeness. Famous pieces by fifteen Brazilians made the visit worthwhile: among them, Leda Catunda’s “Siameses” (1998), Vik Muniz’s “Pictures of Garbage” (2008-11), Ernesto Neto’s “Nave Nove” (2000), and two appropriated Volkswagens; one that Paulo Nazareth filled with real bananas in “Banana Market/Art Market” (2011) and the other, in os Gêmeos’ “Untitled” (2008), a now legendary graffiti-styled Beetle with a huge wooden head hovering above it. Other Brazilians included were Artur Lescher, Carlito Carvalhosa, Iran do Espírito Santo, Rodrigo Matheus, Marcelo Moscheta, Maria Nepomuceno, Erika Verzutti, Adriano Costa, Marcos Chaves and Delson Uchôa.

Newly opened gallery spaces added to the Brazilian invasion. Emma Thomas Gallery inaugurated its space in July with the pre-opening show “Gogó da Emma,” including five Brazilian artists who referred to social unrest in the country. In its third show on American soil, Nara Roesler Gallery presented “Human Ecology,” which focused on a utopian, human-transformed, idea of nature. Brazilian Lucia Koch displayed her series “Air Temperature” (2016), in which she digitally reproduces the colors of sunsets she has seen across the world. Koch prints her sunset archive over silk curtains, creating material idealizations of natural phenomena. Argentinian Eduardo Navarro showed props for “Instructions from the Sky” (2016), in which performers use mirrored-discs and helmets, walking outdoors: their movements are based on “instructions” they receive from clouds seen reflected on the discs.

Also included in the show was British Isaac Julian’s“Stones Against Diamonds (Ice Cave)” (2015), a hypnotizing portrait-format video placed over a concrete cube, making reference to Italo-Brazilian architect Lina Bo Bardi’s famous glass and concrete easels created in 1968 specially for the São Paulo Museum of Art, which she also designed. In Julian’s video, an enigmatic black woman visits stunning and deserted snowy landscapes and caves that look like in-between artificial and natural; Bo Bardi’s architecture also appears in the film, perhaps alluding to a dystopian legacy of modernism. 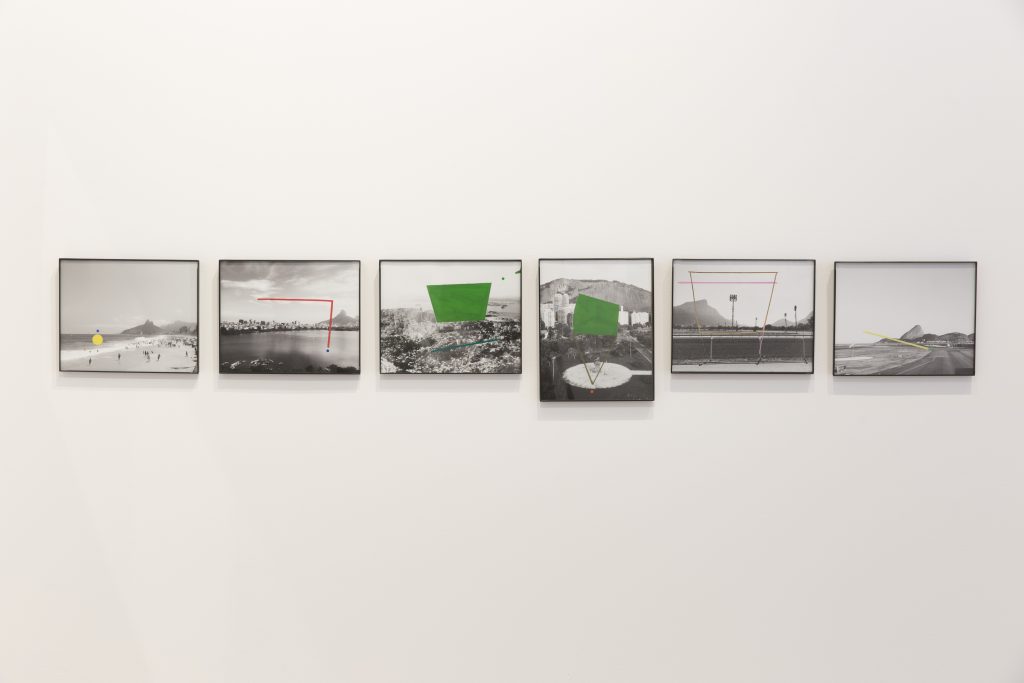 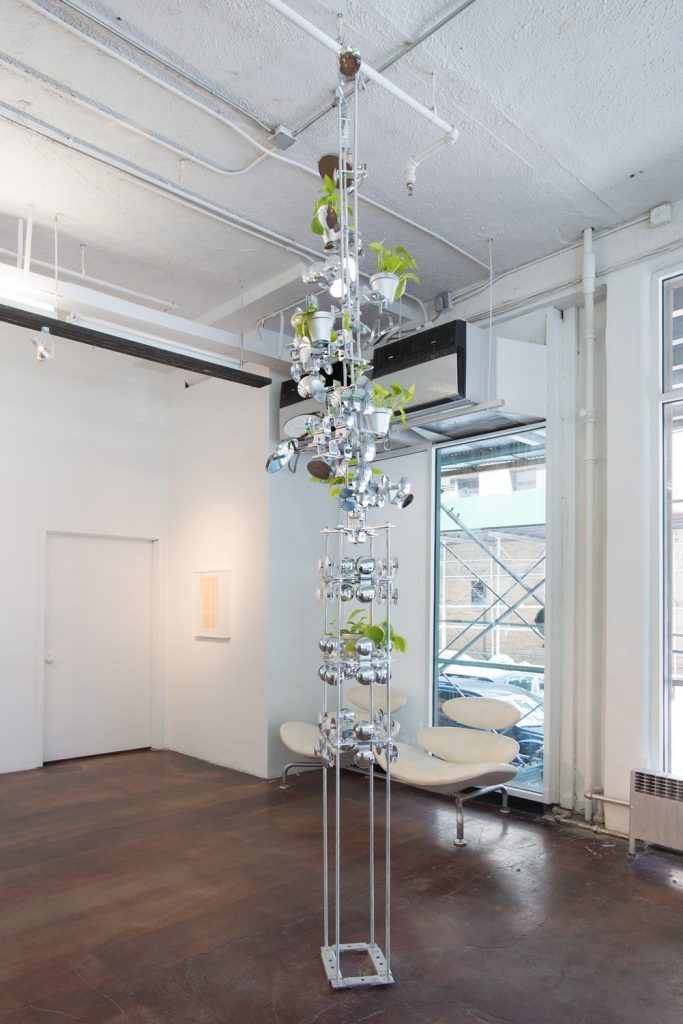 Brazilian-born artists based in New York, Alice Quaresma and Gustavo Prado, also occupied art galleries. Quaresma showed her clever series of mixed media photographs, “Ninhos” (2015-16) in the show “Threaded” at the School of Visual Arts’ Flatiron Space; Prado installed his exquisite mirrored watchtower-trees, “Measure of Dispersion” (2014-16) series at Residency Unlimited New Rochelle and “The First Days of Uqbar” (2016) at Geary Contemporary. Three Brazilians had residencies in the New York area: the graffiti artist Magrela had an open studio during the entire summer, and Ana Prata and Virginia de Medeiros were artists-in-residence at Residency Unlimited (RU), Brooklyn. 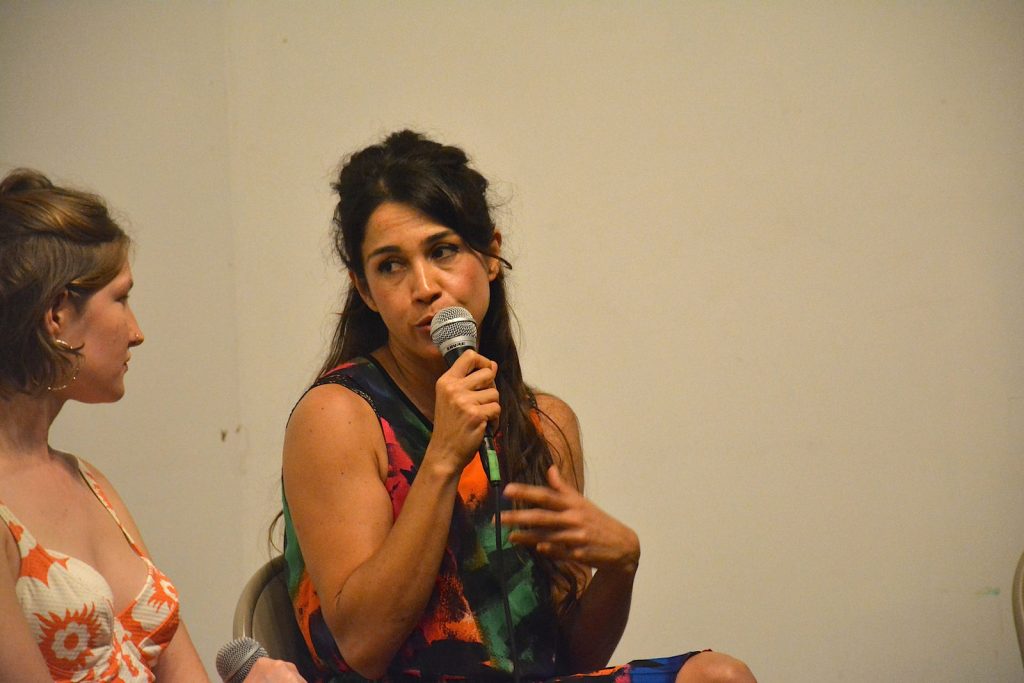 Interested in the LGBTQ universe, Virginia de Medeiros used her residency to explore the voguing community in New York for an upcoming work. To conclude her stay in the U.S, she screened the work “Sérgio Simone” (2007-16) at RU. The three-channel video depicts the story of Simone, a transgender man who de Medeiros met in 2007, in Salvador, Bahia. In the work, viewers watch Simone, with her long dreaded hair, bathing at the Fonte da Misericórdia—said to be a mythical fountain for orixás of Afro-Brazilian religions—and introducing other members of her poor community to the artist. As three different scenes toggle around, from 2007 to 2014, viewers learn that Simone reclaimed her male identity, Sérgio, after a traumatic crack overdose. As a survivor, Sérgio becomes an evangelical preacher, welcomed into a church community that helped him “cleanse” his “stained” past, metamorphosing into a converted, sin-free, local celebrity. The video doesn’t represent exact timelines, letting viewers make acquaintance with Sérgio and Simone, either as charismatic individuals, or as someone who is always becoming, shifting. In-between fiction and reality, “Sérgio Simone” also depicts the ephemerality of Brazilian spirituality, which has recently become stage for a political battlefield, fuelled by rising conservatism coming from dominant evangelical parties. 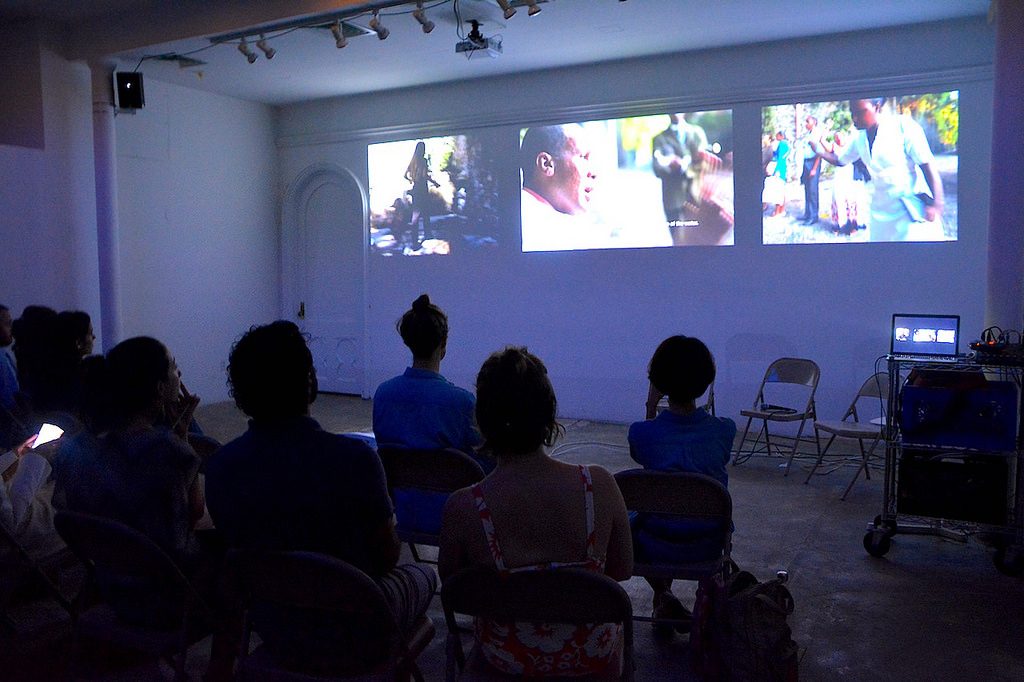 Seeing Brazilian art abroad offers me moments of reconciliation, but it also keeps alive an instigating clash in my mind, between an “imagined” and a “real” Brazil. The thirty-five Brazilian artists whose works I’ve seen this summer probably helped reshape the image many Americans have of Brazil: these works exposed the fluidity of the Brazilian culture, offering alternative realities to images disseminated by mass media. In times like these, when an American presidential nominee preaches a fenced country, and right-wing intolerance spreads throughout Brazilian society, Brazilian artists offer another path, full of contradictions, “failed” modernisms, but one that faces violence, that embraces diversity and in-betweenness: antidotes against pervasive, or local, bigotry. 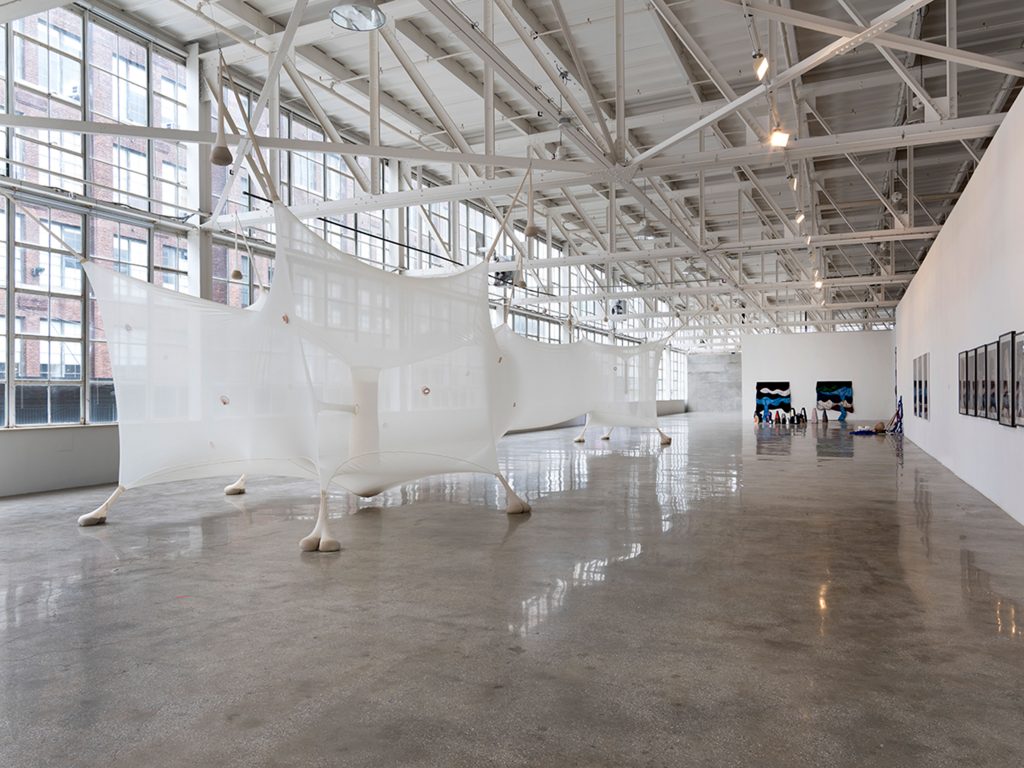