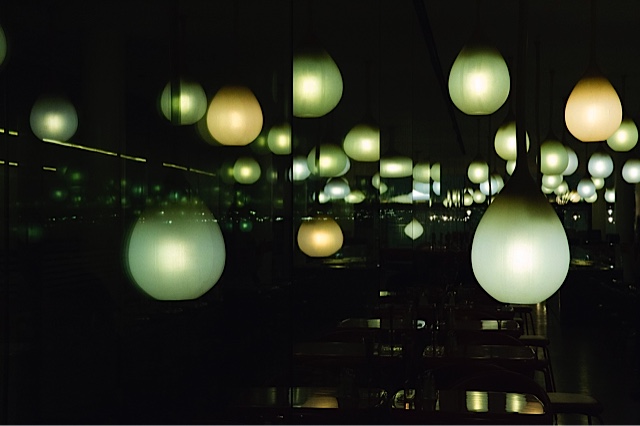 The nature of my connection with Pico Garcez is a glimpse at the evolving future. A few years ago, before my first visit to Brazil, São Paulo-native-turned-Chicagoan Isa Giallorenzo introduced me to a friend, also from São Paulo and then living in Chicago, Tatiana Cesso, a journalist. Cesso has since moved to Los Angeles, and from there recently traveled to Beijing, China. On that trip, she met filmmaker and photographer Pico Garcez. Realizing that Garcez and I would be in São Paulo at the same time for SP-Arte, where Garcez had work on display, she made an introduction and thus we met. The connectedness runs full circle. Turns out that Garcez’s wife, Sheila Auster, who I also met in São Paulo this spring, owns fashion stores in Bahia and is friends with Erikka Wang, co-owner of Chicago fashion chain Akira.

Garcez seems to exist in many worlds at once, in both the artistic and commercial sides of film and photography, in the cities in which he lives, Salvador and São Paulo. Fittingly, he has representation at three galleries, SenaArt in New York, Almavera in São Paulo and Paulo Darzé in Salvador, who was showing his photos at SP-Arte, which is where we met and discussed his work. In the near future, he’s exhibiting at a cultural center in Osaka, Japan. 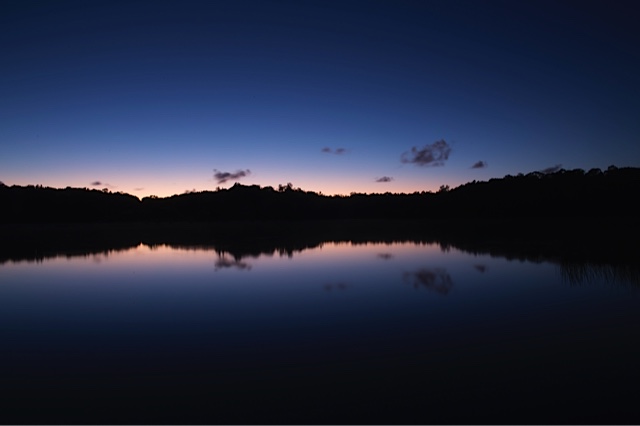 Talk a little bit about your background.
I’m originally from São Paulo. My background is in business administration but I’ve been doing art since I was born because my father is an art collector of older periods like eighteenth-century, nineteenth-century art. I started photographing when I was nine because of the paintings I was going to see, to register and to see my own framings, but I never took it that seriously and thought of it being something just for myself. When I was seventeen or eighteen, I decided to do film because I thought just one frame a second was a little boring, that twenty-four frames a second was much more interesting. That was my youthful energy, which was “Okay let’s shoot.” So I started working in a commercial studio for television commercials. Sweeping floors, painting walls, designing sets, helping everybody like a PA, and then became a producer and then assistant director and then I started directing. After six or seven years I moved back to photography but kept the movies so nowadays I direct music videos, commercials, documentaries, and some things for the internet and I’m doing photography as well, art photography. I have a friend who is a gallerist who said, “Hey, why don’t you give me some frames of your pictures. Let’s start to get into the market.” I said, “Oh, why I never thought of this before.” I never thought before that you knocked on the doors of galleries and said, “Hey, here are my frames, do you want to sell them?” 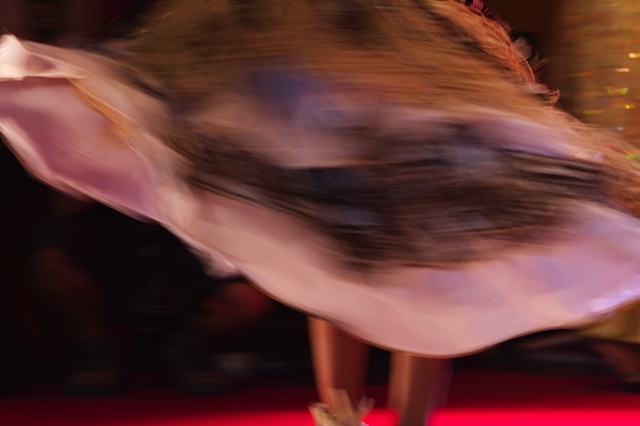 How did you end up in Bahia?
I went there to shoot a film and the producer introduced me to the woman who would become my wife. So then I decided to move there. So now I’ve been living there for nineteen years between Salvador and São Paulo.

Talk a little bit about the art environment in Salvador.
It’s African Brazil. Eighty percent of the population is black so there’s a lot of African influence in terms of the food and dance and music. And they are a very creative population, not just in music but in arts in general. It’s a very artsy city. It’s by the ocean, it has one of the biggest bays in the world, it’s beautiful. The weather is fantastic; never cold. Bahia is the size of France, so it’s a huge state. 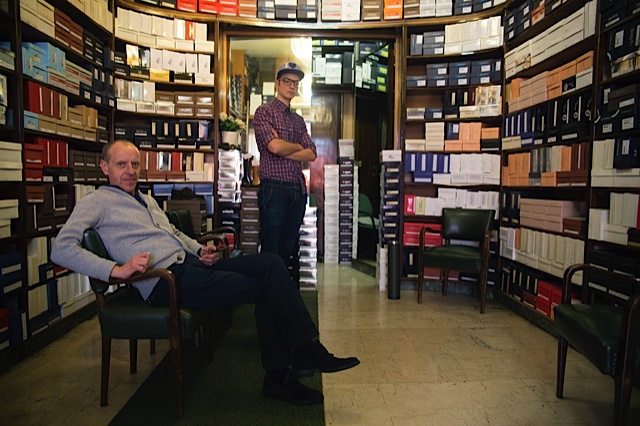 Do you shoot most of your photographs there in Bahia or here in São Paulo? Because the images you have here at the art fair seem to have a color palette influenced by the natural environment, but the subject matter seems very theatrical—not necessarily what one might consider the typical Brazilian photograph of the splendor of nature.
These photographs I did in Beijing and Munich. I do my most of my photographs while traveling, though I do some photographs in Bahia and São Paulo as well. I think when we travel, we got more inspired to see different angles; it’s like the themes come up with me rather than me coming up with them. I never think, “I’m doing this now, I’m programming to do a series of photography.” The series finds me. For example, I’m working on a series called “While We’re Here” about professionals working around the world like a CD seller in New York or a hairdresser in Italy or the oldest shoemaker in Rome. Some people that I find in their environment lead me to think about the idea that, in the future, in these square meters where we are now, something else is going to happen. Things change, so why we are here, why we are in this few square meters, what’s happening now? The other series I’m working on is about theatrical stuff because of the movies as well and application of different lights and situations, so maybe that’s why you saw this look. I’m always thinking about how an image translates some feelings for myself so for example, the pool image is going to be part of a big series that I am doing in Osaka this year. It’s about solitude; it’s about the solitude of being a photographer or the solitude of being a human being, that you’re born alone, you die alone, and some places sometimes are there but nobody will use it, like a pool in a very nice hotel, where you can stay for the whole day and nobody gets into that water so it’s like solitude itself. Or very nice restaurants, with nobody eating, like just tables and lamps waiting for something. Solitude. 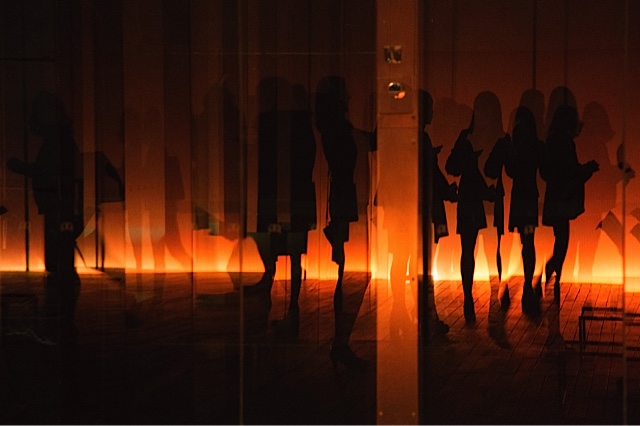 Your color palettes—can describe how you make them? In those images they are very lush, not natural. Are you looking for a certain lighting and coloring?
Sometimes I do just a very low exposure to get a little dark because I love the contrast as well. So this series that I brought from China, from Hong Kong and Beijing, was called “Contrasts and Reflections.” I was seeing mirrors and people in the reflection and then there is this second meaning in reflections—what does reflect to you, what makes you think in some reflection. I’ll always find the light the way it is and maybe do something in the exposure. I don’t bring lights or flashes.

What are you doing these days in  film?
I love to do music videos. It’s a very interesting experience because it gives you freedom to experiment, to try new things. You don’t have a boss to argue with you or you don’t have to follow routes. Sometimes I don’t like the music that much but I just deal with images so I don’t care. I try to get the music just to inspire me. 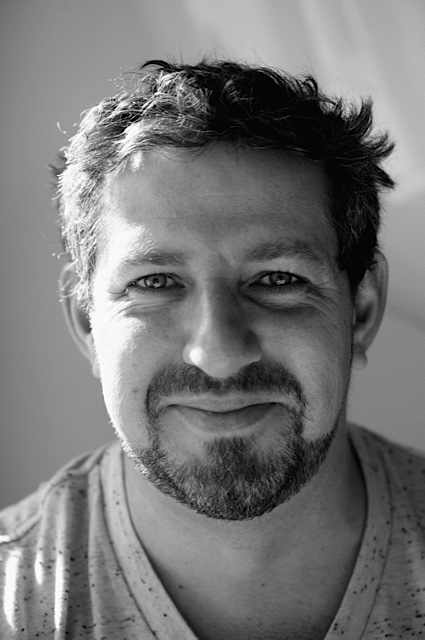