It’s fashionable these days for artists to use words like “research” and “practice” to describe what they do, as if to assert a kind of academic rigor in what is clearly a revolt against the inspired frivolousness that seems to mythologize the artist in history, from Van Gogh to Picasso to Warhol. But Ana Amélia Genioli has a higher claim on this new scientific system of describing the art process: she practiced as an architect for a decade, and most recently earned a PhD.

I was captivated by the flow of ideas in her work, ranging from the political to the scientific to, of course, the art. She’s found the perfect expression of art in nature in her study of water, the nectar of life itself but also a substance as unpredictable and uncontrollable as Jackson Pollock on a bender. Her exhibition at Galeria Eduardo Fernandes features maps smeared with fluid stains, as well as a larger piece where the stains mar an act of government,  which turns out to be Brazil’s first comprehensive water legislation, enacted early in the long reign of Getulio Vargas.

I discussed her work with her at the gallery and then again in an interview at SP-Arte. 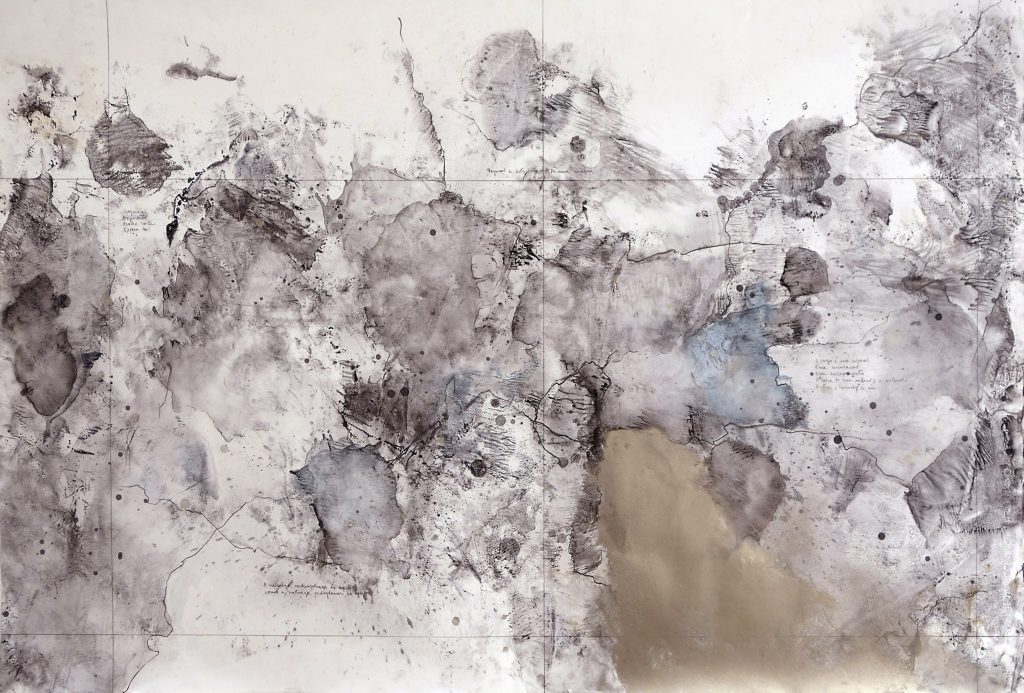 Tell me about your life: where you’re from, grew up, how you got started with art?
I was born here in São Paulo and I’ve lived here all my life. At first I was an architect.

An architect?
I was an architect. I’ve always been working with art, but not professionally until the eighties. I started to make exhibitions at the end of the eighties; in the nineties I started a more professional career with art. I took many art courses including art history at the Museum of Art of São Paulo and many small workshops with artists. After I finished my BA, I did my MA about contemporary art and last year I finished my PhD, also researching about contemporary art.

So are you an art historian then, or is it more like an MFA in the United States? Is it about making art or is it about history?
It’s not exactly history because I did my study in communication and semiotics. 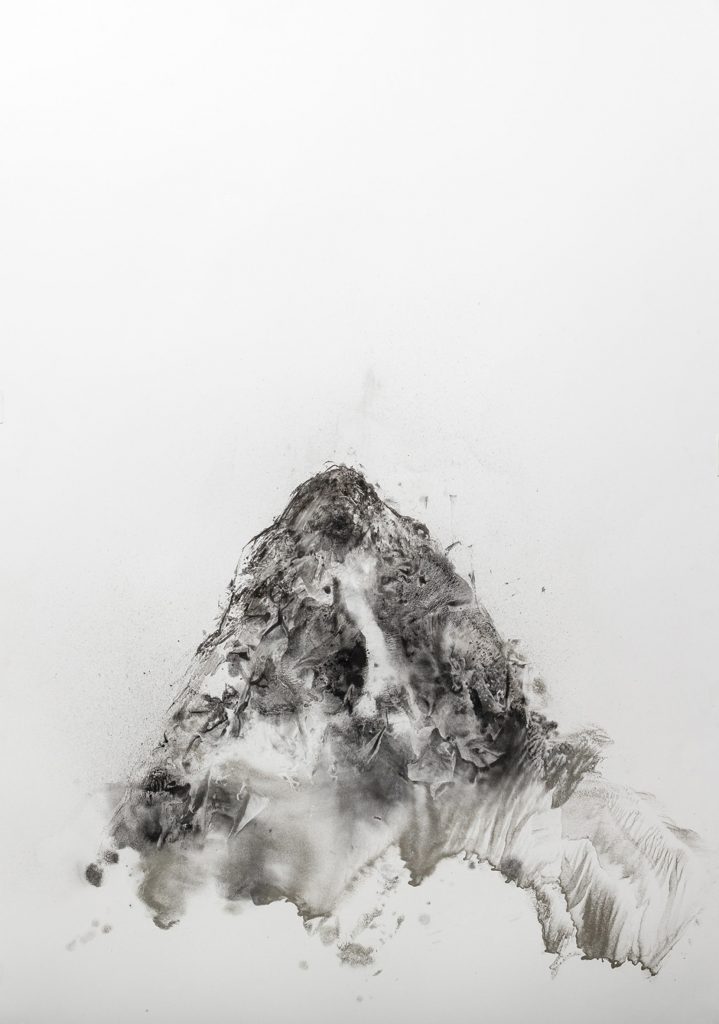 Wow. Where did you get your PhD?
Pontificia Universidade Católica, PUC, in São Paulo.

Was your thesis related to the artwork you’re doing now?
Yes, It’s absolutely connected with the research of my thesis.

Were you practicing as an architect? Did you actually design, work on buildings and things?
Yeah.

Houses or commercial buildings?
Everything. I worked for Compaq Computers almost ten years designing offices for them. And later, I’ve designed houses, but my masterpiece is my atelier. It’s the intersection between art and architecture.

You have a background in architecture, you have an interest in science. Are these things coming together in your art?

My artwork in general always dealt with these interests. From architecture, I could develop a keen sense of space and human scale. From science, I could answer many questions that appeared in my artwork and I could also understand a little about the creation process and artistic language. And most important, through science I have learned to trust my perception and intuition to make art.

How would you describe the work you’re doing now that’s on exhibition at the gallery?
I’ve been working with many media—photography, installations and objects—but at the beginning I started with drawings, and I returned to drawings in this exhibition, which is the beginning of my most recent research. I’m talking about water. Water because my academic research was about communication and “body”—body because we begin with our body, anything we do is with our body. I tried to think about the movement of the body, that is, the permanent changes of the body.

—Adapting, yes.
Yes we adapt and we change ourselves the whole time.

So you’re starting with the body, the water—most of our body is water—right?
I started to research about water not scientifically but in the perceptual field. I didn’t want to do, “Oh my God I have to know how water is made,” something like that. Many things are very interesting about water. For example, the qualities of water are normally linked to life and “dry”—no water—is to death. So, for example “fertile/infertile” or many, many, many words—

—connect to water.
Water, so it’s life. And other things, for example, many parts of the body give names to water. For example in Portuguese it’s braço, the arm of the river. So many coincidences between thinking about water and thinking about the body and this is one. The other thing I was very interested in the quality of the flow, the fluidity of the water. And the permanent movement in all kinds of water. If you think about a lake, you have all the movement but underground, thought groundwater. If you put water in a bowl and leave it there, because there isn’t movement, it rots. Water is always moving, the whole time.

It sounds like you’re starting at a very core idea about water. Is it also influenced or motivated by the environment? In São Paulo you had a drought, a lack of water. Were these things motivating your research or were you already thinking about this long before?
I don’t think the situation in itself inspired me to do all of this because I was already interested in water but perhaps in the future I will make a project talking specifically about the water problem in São Paulo. I told you about the relationship between the body and the environment. If we have problems today with the water in São Paulo, it’s a problem with the relationship between body and environment. At the beginning, São Paulo started as a city with the missionaries finding a point where many rivers cross. So here it’s a very “water” place. 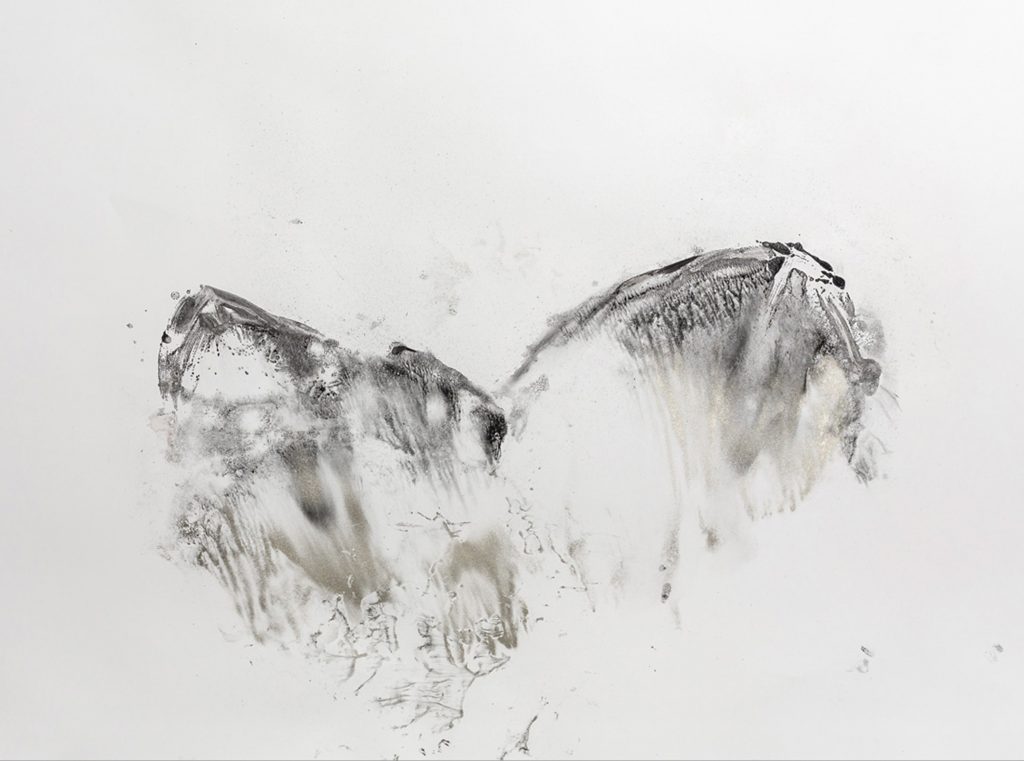 Talk a little bit about the process now, what you’re doing with the art. You had the maps, then you also had the texts from the—
—Water code.

So talk about those two things a little bit and how that became the actual manifestation of the art.
I started to make many drawings of water, really trying to grasp this fluidity but in an image. I’ve been using very wet techniques and for example I use the pigment with a solvent and they spread like water and I have to deal with this fluidity to make my drawings. I like it when I catch this movement of the water, and the image is a result of the process. It’s how I did the maps and the mountains also. And in the code of the water, it was the first code, created in 1934, and it’s a code where they categorize all kinds of territorial water. So what is a “river” or what is “falls,” what is a “fishing” water? All kinds.

Lakes and rivers and everything.
Lakes and common water, private water. And whether you can navigate. When you categorize you are isolating kinds of water and it’s interesting because you break the fluidity of the original concept of the water. What I did is splash a liquid to try to restore the idea of water’s fluidity.

Is the code still in existence or was it just a temporary thing?
It’s changed a lot but it’s the foundation of the current code for the country.

And then the maps, the maps are not of real places or are they?
No they are invented places.

So what is the motivation for that invention?
I call the maps “travel diaries.” And there is this area painted with this pigment and one thing is interesting because the pigment, when you print it, when you see, it looks like really a map, you know with the topology, the—

—the mountains and the—
—the mountains, the rivers. And the second thing, I collected sentences for many years from many important authors for me, and my own sentences, and I put it all together. But another thing is, when I’m doing the map, I never know the result because this is a surprise. When you are dealing with this liquid, you don’t know, because it is very hard to control. So each step, I have to decide the next step. I never have a big plan at the beginning because I have to decide  the process the whole time. When I’m talking about the body and environment changing the whole time, adapting the whole time, I’m talking about decisions have to be made each step, not globally.

Is this ongoing work for you or was that a project and now you’re moving onto something else?
I’m going to the next project.

Is it going to be more of this type of thing or something else?
Definitely, this thing of water captured me. And now I’m going to Iceland in fifteen days, to Skagaströnd for an art residency at Nes Artist Residency. I’m going there between the spring and summer and the ice water is started to melt—

—the glaciers and the fountains.
Yeah, my plan is interview people to tell me histories about this, how this changes their lives. And then I’ll work with drawings, maybe installation, I don’t know, I’m open to the results.

It’s almost like the opposite of Brazil. Iceland and Brazil, they’re very different.
No we have now the same political crisis. But there it’s like a playground for us.