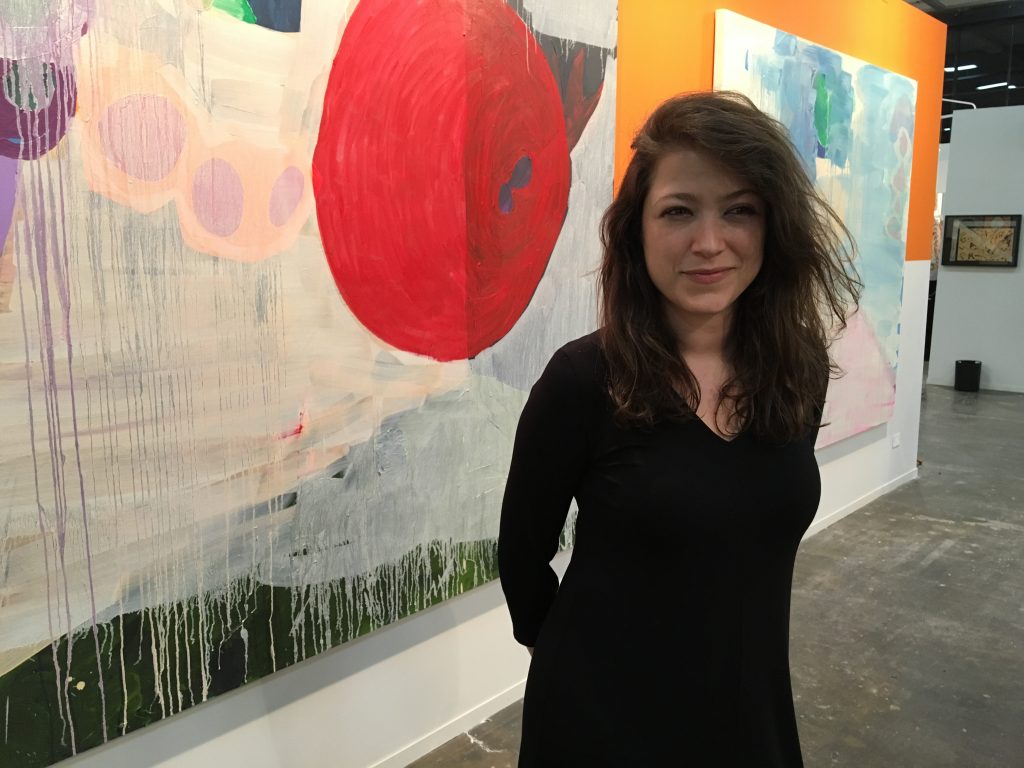 I’d never heard of the artist Maria Lynch a few weeks ago. But by the first day of SP-Arte 2016, I realized that she was everywhere, prolific in a way that most artists have to toil for many decades to achieve. In fact, three different galleries were showing her paintings at SP-Arte, plus Blau Projects is currently featuring her in a solo exhibition, “Ficções Sensorias,” which I checked out after meeting her a few days earlier at another gallery opening.

It’s a playfully colorful and immersive show, with bright abstract paintings; blind boxes for hands that surprise the touch with sticky goo and tinsel; her name painted in a graffiti-meets-tacky-jewelry style and a closet-sized room with a floor covered in that sticky green goo, which she calls the jelly pool. Get to know her work, and you’ll discover a sense of childlike joy pervades it, filled with stuffed animals, “silly” performances and other totems of play juxtaposed against tightly composed abstract paintings. With sand-shaded pastels juxtaposed against bright red “suns,” and a carnival-like philosophy throughout, Lynch evokes her hometown of Rio de Janeiro.

The thirty-four-year-old Lynch grew up in Rio but has lived abroad—most recently in New York, in Brooklyn natch, for the last three years—since reaching adulthood. We talked about her current show at Blau Projects, along with her upcoming exhibition in Los Angeles, one afternoon at SP-Arte. 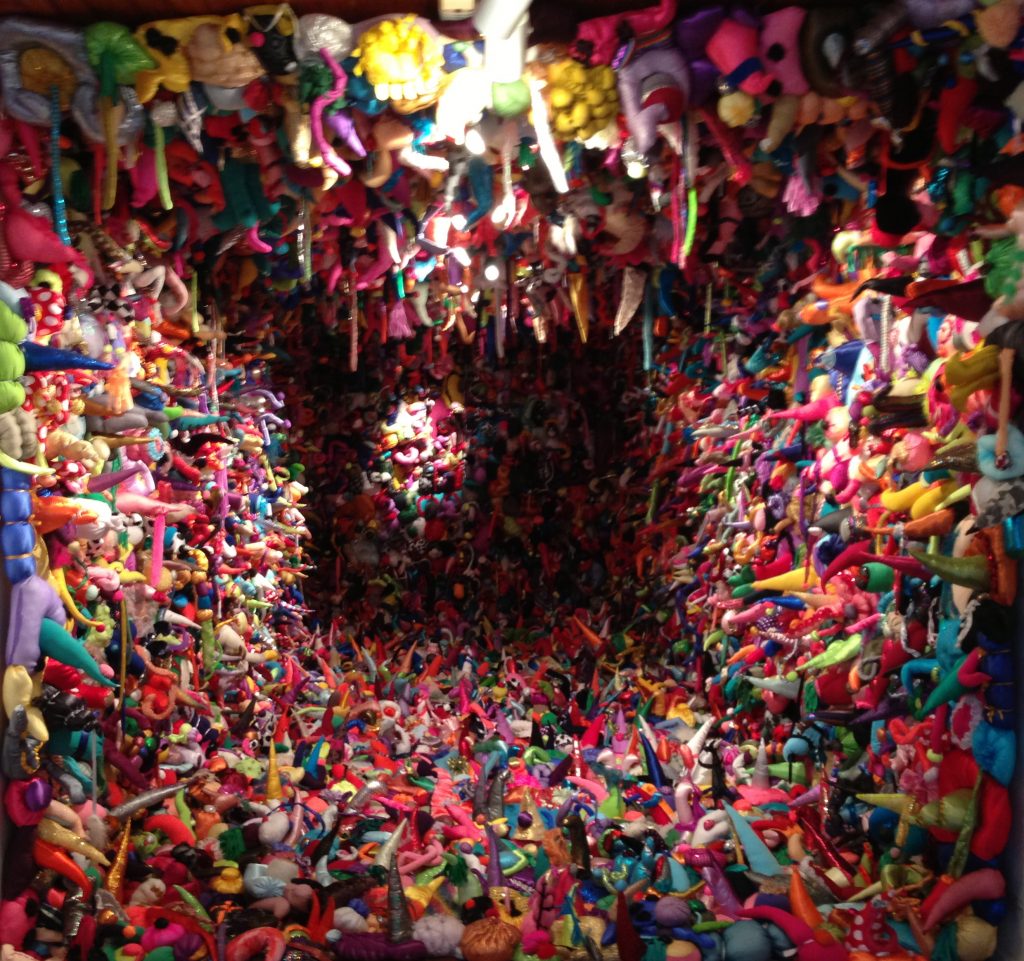 Let’s start with your background.
I was born in Rio and when I was twenty-one I went to study in London and did a post-grad and a master’s. I was already painting—there was a movement of coming back to painting in Brazil and I am proud to say, because everybody tells me, I was one of the first. In the eighties there was this comeback of painting and then I think people started painting more and more and then in 2000 I was just painting like crazy, big scale, and people were like, “What is this girl doing?”

Was your family involved in art?
My mother is an artist but at the time she wasn’t working much, which was good for me, to have that separation, to have that independence to not follow so much what your mother is doing, but that of course influenced me. She was a dancer and then a choreographer. She does video installations and video performance. 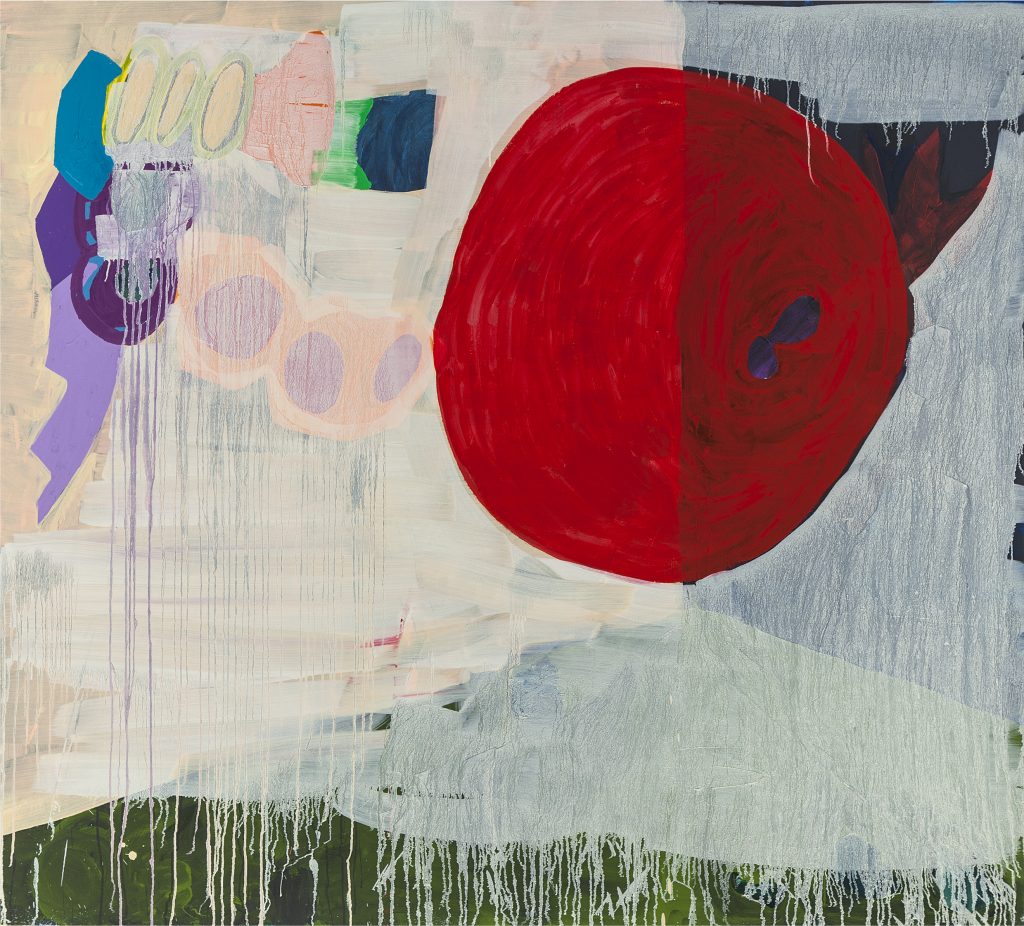 Talk about your exhibition history.
I’ve had a few already in Brazil and I’ve had two shows in New York. I had this show with New Museum at a festival [Ideas City], where I did this installation I made four years ago. After painting for about eight years, my work was already a lot about the fantastical and a sense of fiction. So I wanted to create something that was more real, to have a contrast, so I started to do sculptures. And then I was interested in kind of creating spaces and making environments. That’s why in this show at Blau I made the whole space painted half orange because I wanted to have the experience, not only of facing a painting and dealing with it but more being immersed in it. Then I started to do these other “rooms of experience,” the one that you saw at Blau, the jelly pool.

What do you call it, the jelly pool?
I just translate it. But I call them rooms of experience.

Has anybody walked into the jelly pool?
Yeah everybody is going in. 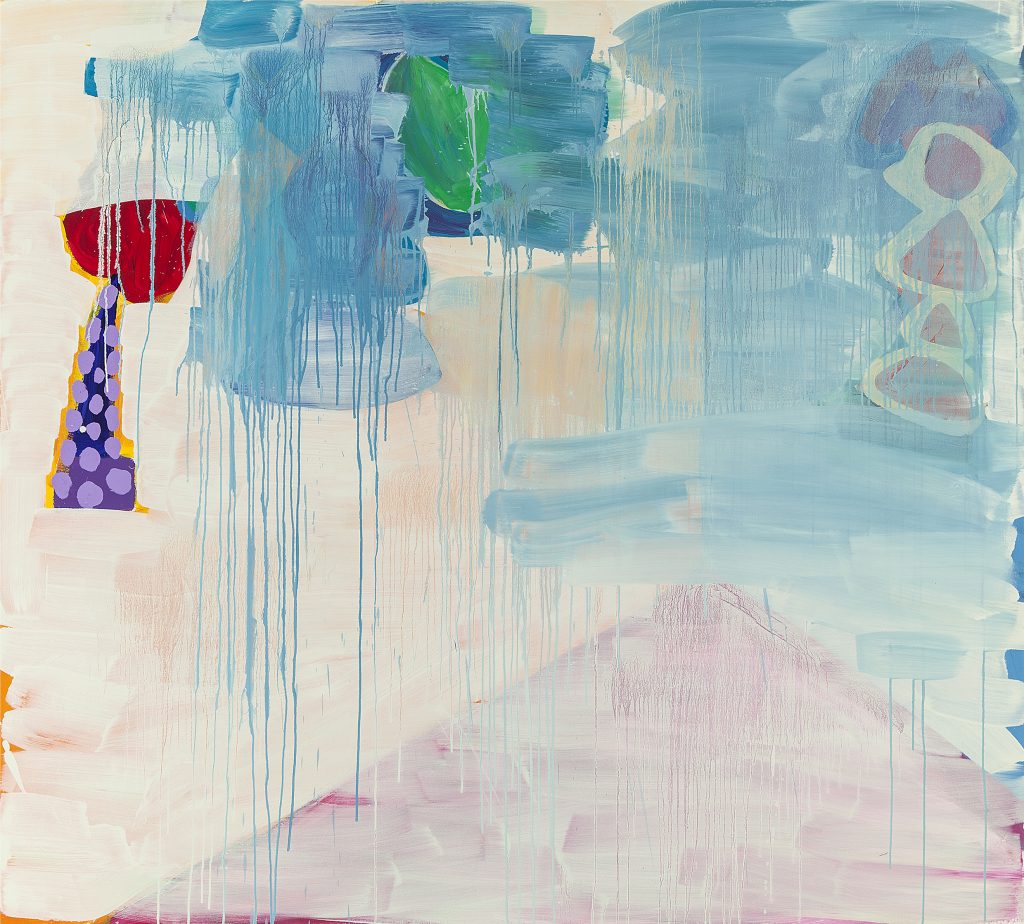 Barefoot or—
Barefoot. But the idea, the original idea was for people to take off their clothes and get in naked, by themselves, because I want them to experience by themselves.

Have you done it yourself?
I’ve done it, yeah. This whole show is a meta language about being an artist and the work becoming their own art, their own artists. So I did the “Maria Lynch” of glitter. I did my body cast and I put it in the painting and I did diluted painting. And all of the phrases are about philosophical terms, and phrases of Nietzsche and Spinoza have this line that they call” the thinking of the difference” that I love and engages a lot with my work and complements it in a way that I can deconstruct rationality and make people be more into themselves and be more playful, more joyful. And I think I do a certain political work in a way, even though it is very playful. I want people to have the relationship with themselves, coming back as a child, coming back feeling who they truly are inside and the morality just vanishes. So that’s what I want people to be able to access through my work.

How is your work political?
In that way I think the political is in every human being. If you’re political, you’re going to create that difference.

So you’re not commenting on anything specific.
No, not the political of politicians, but the political in the broader sense, in the sense that you should make your life the most joyful life and not in the mundane way of “I’m just going to have pleasure.” But if you find that happiness and that contact with your pure—not pure self because I don’t believe there is a being, like a spirit being—but encounter your own empowerment. That’s all what Nietzsche was talking about and it’s all what Spinzoa was talking about and I try to make that in a visual form so people can engage.

Did you study philosophy?
Yes. I did for years. 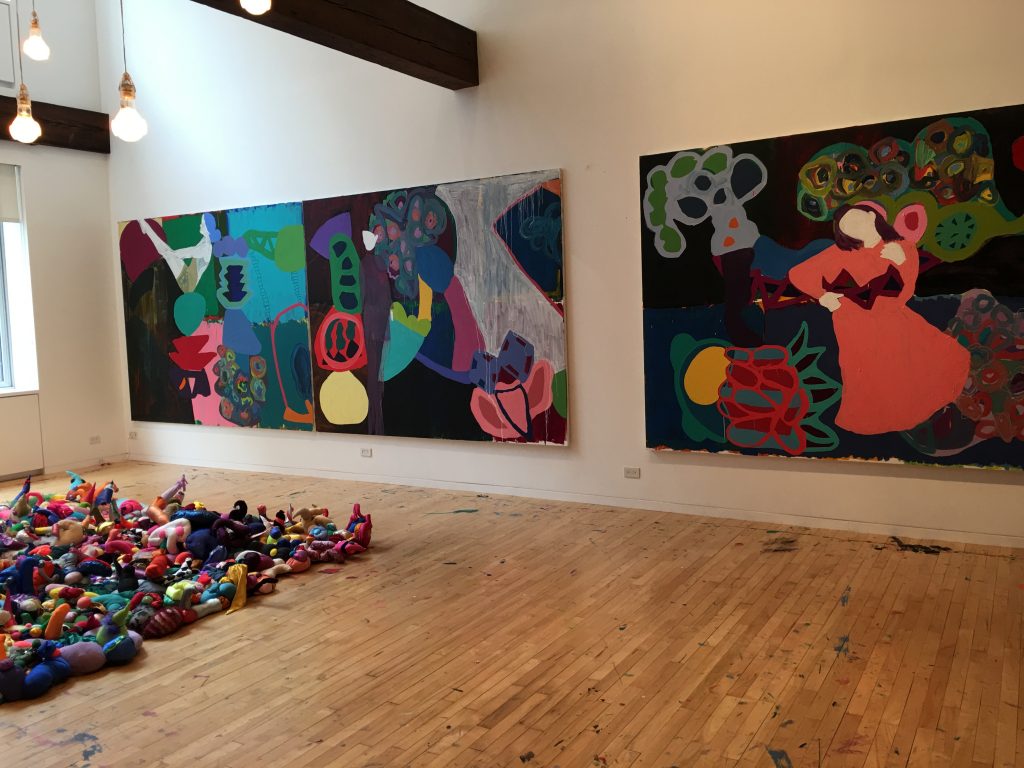 There seems to be a strong connection with Brazilian art and philosophy, more so than I’ve noticed in Americans?
That’s true. I think Brazilian art is more poetical; they are more connected with the visuality of poetics. And sometimes with concepts of philosophy.

One thing I sensed in your show was a definite Brazilian character to it, echoes of Carnival.
That’s because it’s all the relationship with pleasure. So Brazil is a culture of the body, of beauty, of celebration, of parties and Carnival, the flash. So not by any coincidence, my work has that connection because it has a celebration, it has an explosion of colors, a combination of colors that are unique but at the same time and then I put the—did you see the fringe, I put there?

That’s what made me think of Carnival, the fringe.
And the sculptures I make with fabric as well relates a lot to Carnival. The excess, the baroque, you know all of those things are super important in people’s lives. Because people just take themselves too seriously and you have only one life. 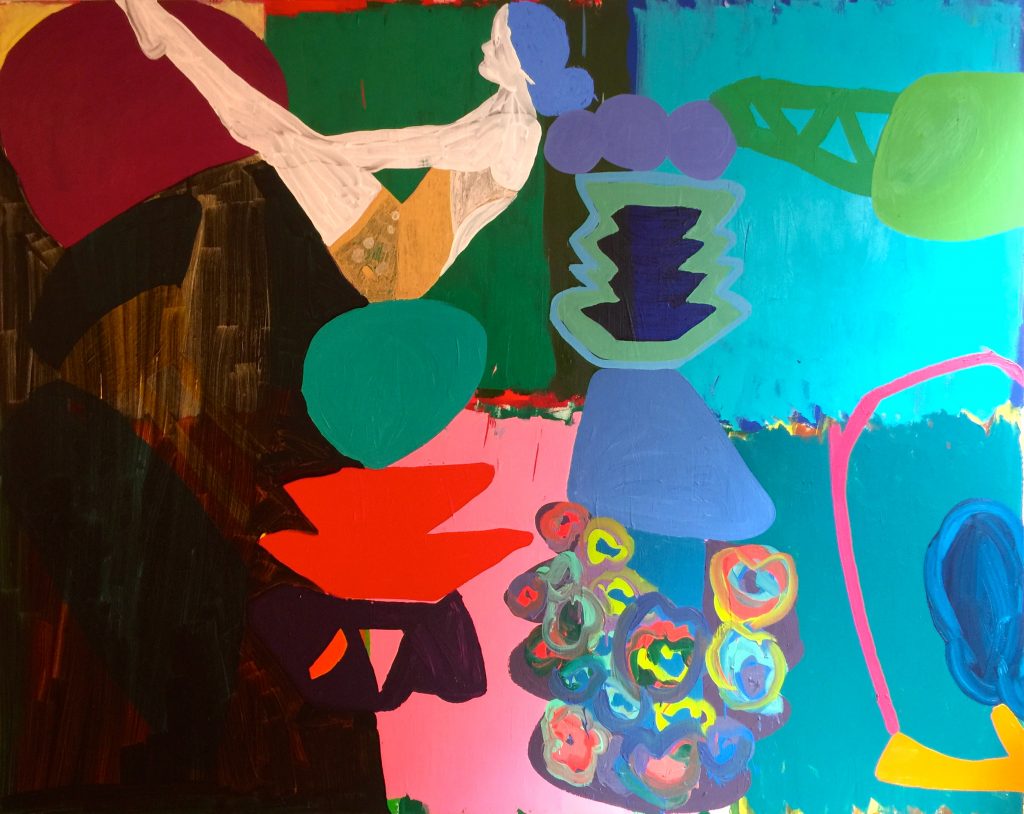 Do you ever worry about that being a cliché of Brazilian art, you know the sort of the tropical…
I think that’s such a superficial comment—yes, if you see something on the surface, it’s that, just that comment. But then if you look at all of my work you see that the research is a different one.

It’s like every artist works from their own experience, it’s just you have…
Your culture.

You live in a tropical place so it’s going to reflect that.
And it’s not necessarily that I’m doing a comment on that, on all of those concepts. Now you understand how it comes from this other place.

What’s next for you after this exhibit at Blau Projects?
I have a solo show at a gallery in LA., Wilding Cran; it’s a gallery in the art district. They’re doing super well, they have amazing artists, and I’m going to do a solo show there with different paintings than this one. 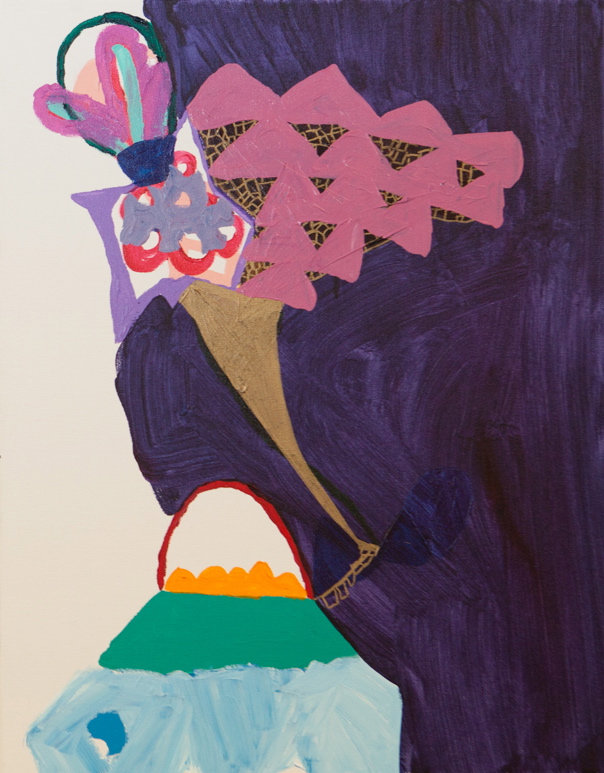 The ones that are going to be in L.A.
Yeah, because I just finished them in New York before going to Brazil. But they have a conversation like all of my painting—

—Is the work you had in Brazil, is this all work you’ve done since you’ve been here, like really recent?
This I just made a month ago for the show. I have a team because we had to do the mold, the body cast, the sculptures…

What’s it like to be a Brazilian artist in New York? Are there a lot of other artists from Brazil that you’ve met, too or…
There aren’t so many. There are a few here and there. And the ones that I see, in the big galleries, they’re already super established.

There is an interest, along the lines of “Oh it’s kind of exotic in a way.” I was doing a residency called Residence Unlimited in New York, RU, which is very good. We had about three curators come in each week, so we were talking so much about the work and then I saw that curiosity because I think it works in parallel, as in it’s contemporary but still Brazil is doing different things now; probably now with the political crisis we are facing, things are going to change a little bit and the art you know is going to become more political in different ways. 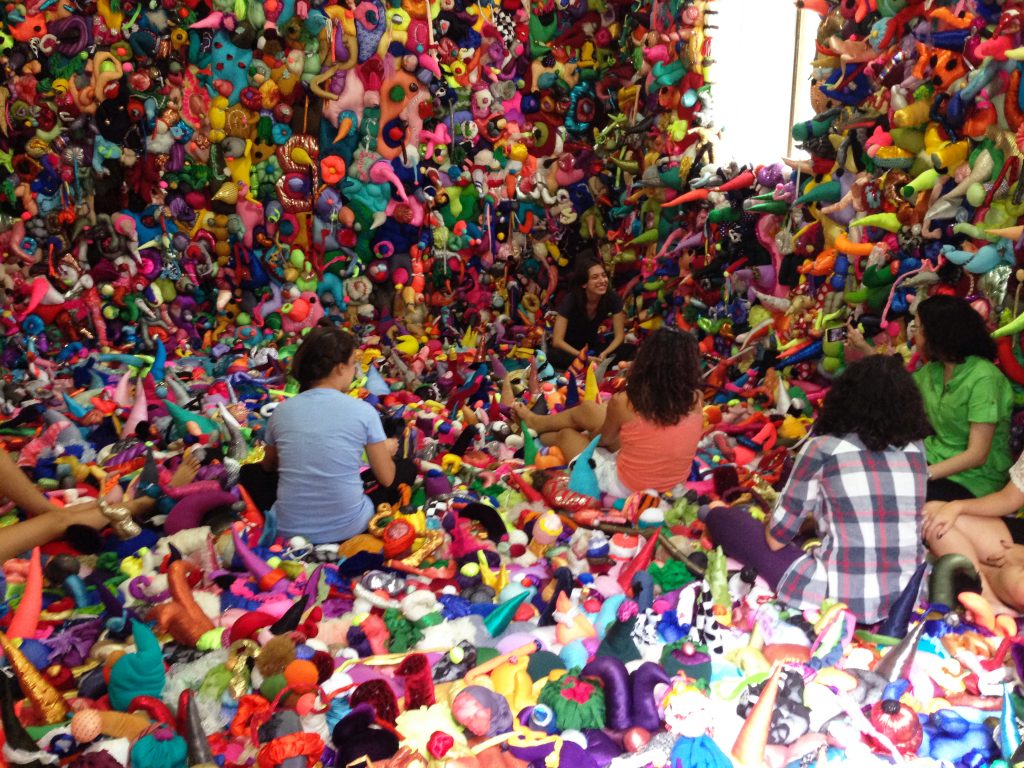 People are getting to know Lygia Clark and Oiticica and my work has so much to do with that, the relationship with the experience and the body and changing people and trying to make people think about different things. All of my installations are so much about having a kind of a catharsis with memory, especially connections with a fragmented memory they have and then you kind of put it all together in a weird way. And this big installation I made with the New Museum, that I first showed here in Rio at Paço Imperial, it’s a collection of fabric that I constructed that reminds me of Teddy bears, but they’re not, it’s kind of scary and strange. I like to put the work in the space of it’s in-between—it’s not one thing, it’s another. It has that awkwardness that you cannot place it, you cannot say what it is. That’s in the abstraction of the paintings. I’m going to do in LA this other installation that’s going to be super cool. It’s going to be an entire room filled with balls, transparent balls of different colors, and you’re going to have to cross the room so it’s going to be all your experience with your body, the emptiness of the space, and the vibration of the sound, it’s going to have the sounds my friend Rodrigo Amarante is  doing. He’s an incredible musician. That brings that nostalgic feeling, at the same time that weird vibration that’s going to come out between the spaces of the balls and you’re going to have the relationship with your body and this empty space to cross an entire room. So that relationship with the body is central; that you’re coming back to you and you’re coming back to your essence in a joyful way.