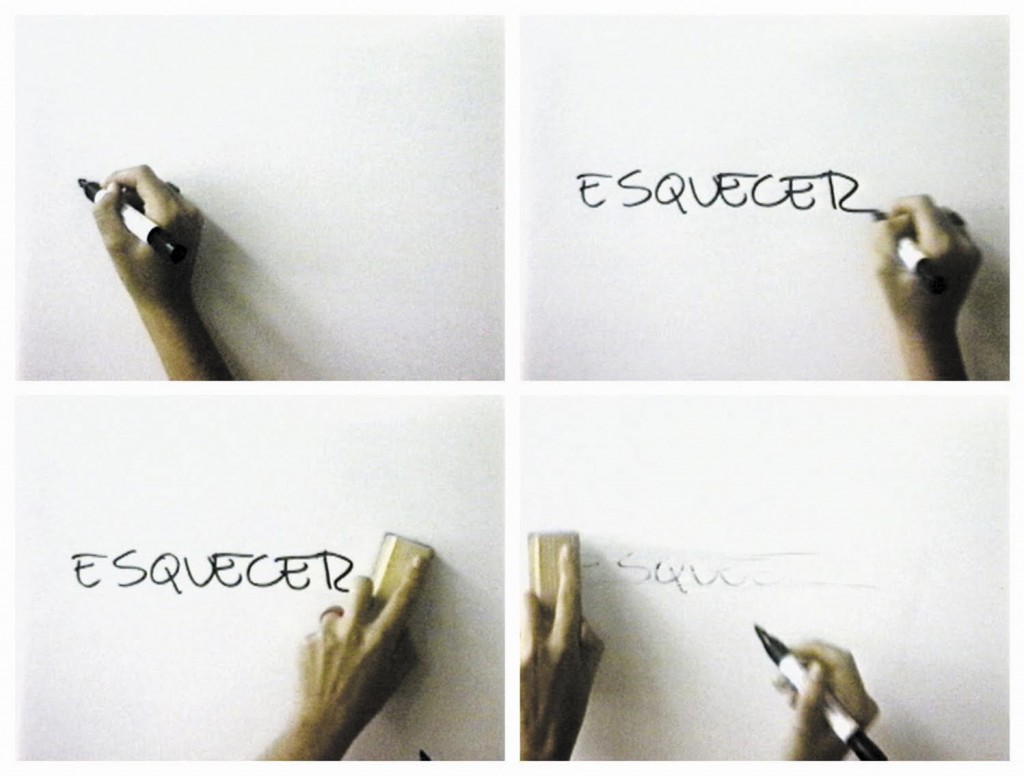 Wall objects created from the covers of books written in languages that the artist doesn’t speak, and others from books’ spines whose content will now remain forever unknown; phrases about silence carefully embroidered on rectangles of gray felt suggesting images that are absent and yet whose presence can strangely be intuited; an edition of artist books created from forgotten tokens recovered by Marilá Dardot and Fabio Morais amidst books for sale in used-book stores; a video that critically unveils, not without humor, the disparity in the economic condition of the Brazilian population, using a language common to that of supermarket sales ads; a photo that visually translates the core of “The War of Time,” by Alejo Carpentier: those are a few works that can be found on the first floor of Marilá Dardot’s solo exhibition at Chácara Lane, “Guerra do Tempo” [War of Time], a beautiful visual essay on language, memory and oblivion. 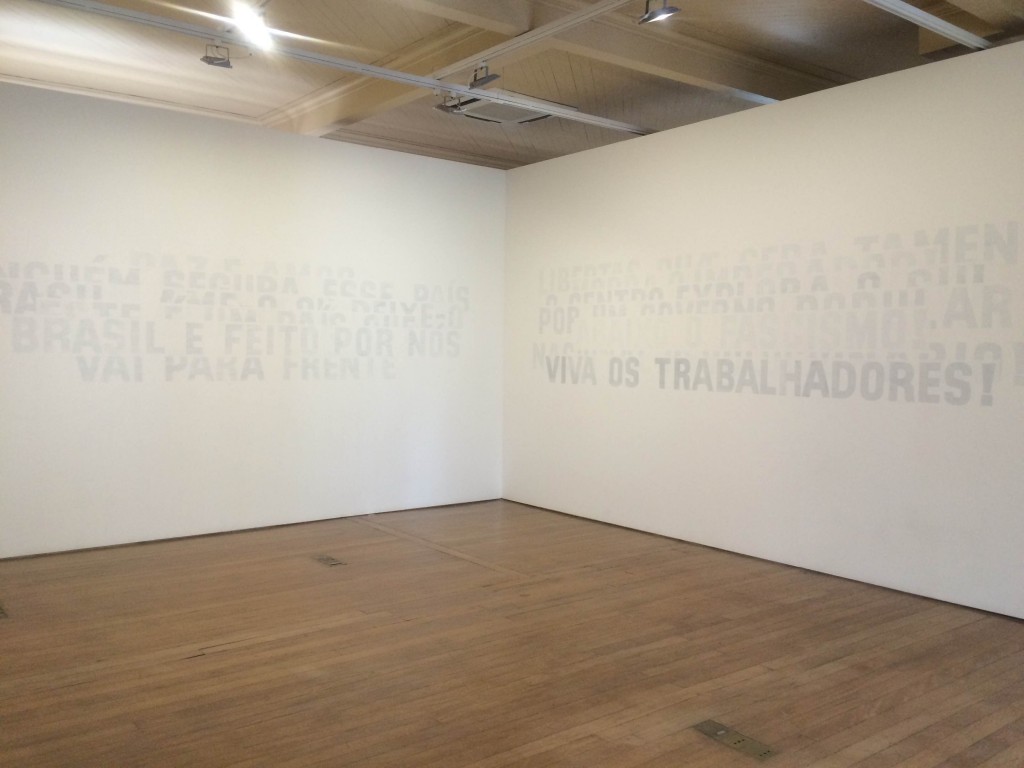 Despite the power of the ensemble presented on the first floor, it is on the soundless second level of the exhibition that the show comes together. While I observed Dardot’s hitherto unseen installation “Demão” [Coat], the French actor Anna Karina’s smooth voice inadvertently made its way out of the depths of my memory and whispered in my ear: “Tout est en mouvement. Il suffit d’avancer pour vivre.” [Everything is in motion. Simply move to live.] These verses, from the quotation of a nonexistent poem by Paul Éluard in Godard’s “Alphaville,” had their meaning condensed and enlightened by the vanishing phrases on the white walls. Each sentence of the installation is a political slogan from different moments of Brazilian history. They were written in black, then partially covered by a coat of white paint, just to be followed by the next phrase and its accompanying layer of white, and so on. An eloquent and elegant review of our history, of what is yet remembered and what has been forgotten—not without leaving its trail. 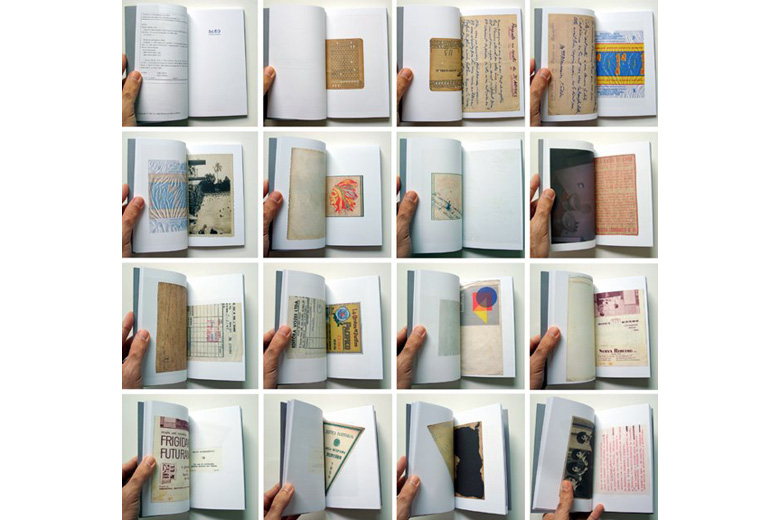 It was there, in the second floor, that I understood that time is in the center of this exhibition, a show that gathers more than thirty works by Dardot, developed from 2002 to 2016. And there is a reason for that: the show marks the reopening of Chácara Lane as a space devoted to contemporary art. The house, built in the nineteenth century, has had many uses, from residential building to Red Cross ambulatory to library. To debut the latest transformation, curator Douglas de Freitas invited an artist whose research could subtly echo the location’s own transitory moments.

The question of time, and its extension in transformations, erasures and do-overs, has long been present in Dardot’s production. Widely known for research that involves language, literature and the written word as a visual element, the artist is a collector of books and quotations that are displaced and re-signified as part of her own work. As Umberto Eco beautifully expounded in one of his last interviews, everyone who owns a library knows that it is not a repository for read books, but a project for the future. This temporal multiplicity inherent to all libraries is in intimate relation with Dardot’s poetical and interdisciplinary body of work, and, hopefully, will be kept in mind for the space where it can now be seen. 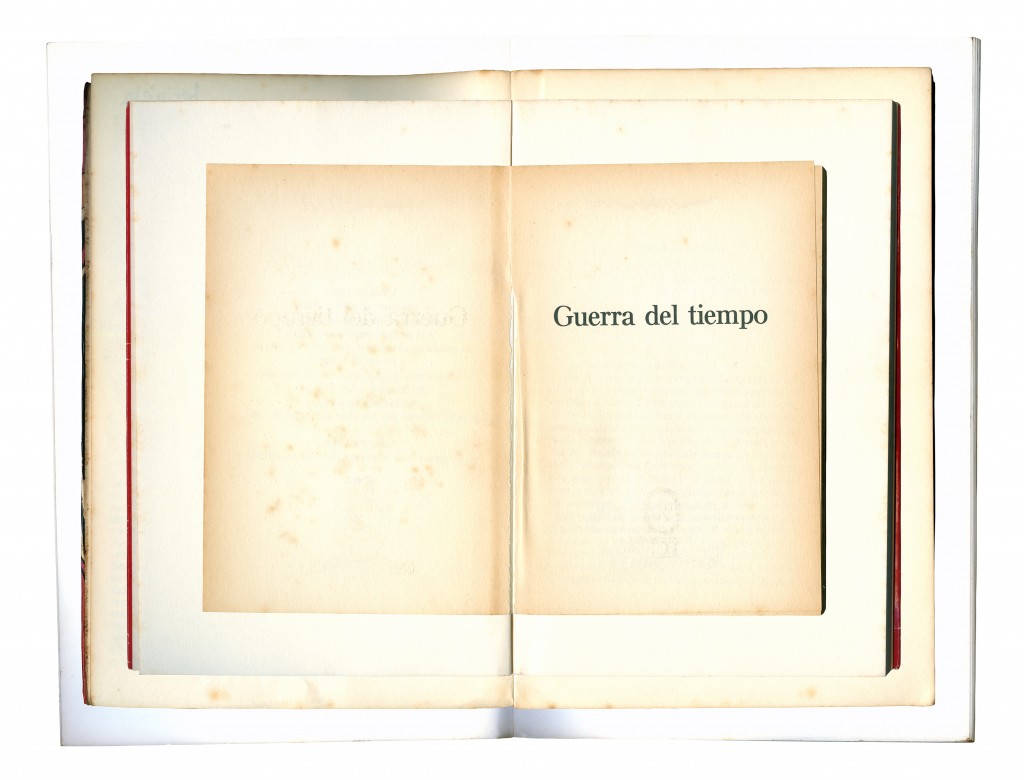