In early December, when I dropped by to visit my neighbor, the artist and performer Guto Lacaz, at his home-studio in a 1950s house in our leafy residential area, I got a glimpse of another of his uncommon inventions. Lying in his backyard where most would have a BBQ grill, a flowerbed and some homegrown greens was an unusual-looking all-aluminum rowing boat. I know he doesn’t sail for sport but when the unpredictable Guto goes afloat it’s for the sake of art.

Among the festivities on São Paulo’s 462nd birthday, Monday, January 25, surely the most unconventional event sponsored by the city council will be the performance Guto Lacaz will present at the Ibirapuera Park lake. Filmed by a drone, he will put afloat a 550-pound, seven-meter-long aluminum catamaran with eighteen paddles manpowered by only one rower, which will certainly astonish onlookers. To add muscle to the task, seventeen friends will take turns with him rowing non-stop from 8am to 5pm. “I named it ‘18’ in homage to Santos Dumont [Brazilian airplane inventor], who had a boat with the same name, and for Buckminster Fuller’s catamaran, ‘Rowing Needles.’ As a child, I was at the opening of the park in 1954, for the city’s 400th centennial. Water has always fascinated me,” explains the artist-inventor who, since the 1980s, has balanced his keen interest in physics, mechanics, electricity and electronics with elegant poetics in a string of humorous and insightful installations, performances, artwork and graphic design that defy common sense but nonetheless have a broad appeal. 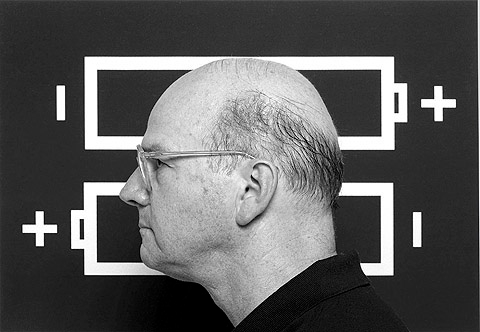 “I’m obsessed with establishing relations among objects, colors, forms, spaces, products, words and ironies. I’m always taking notes, developing projects, buying materials, searching for solutions to foster new products,” says the artist—who dislikes the verb “create”—a perfectionist and admirer of Saul Steinberg who put aside an architecture diploma to pursue a life in art after his first illustration was published in a São Paulo daily in 1974. His funny, idiosyncratic objects and unpredictable, amusing installations have been viewed in museums in Brazil, as well as in Paris and New York, and have been included in two Biennales, São Paulo and Kwangju, South Korea. With several books published about his work, Guto Lacaz received a grant in 1994 from the Guggenheim Foundation and was awarded, in 2007, the APCA Award, the most-renowned prize in art in Brazil.

This interview was conducted with mugs of cappuccino over a kitchen table looking at his backyard and onto his double-height-glass-façade studio on a rainy Saturday at his home in Jardim Paulista.

Guto, in two words, how do you explain your work?
Contemporary. Modern.

What influenced you most?
Basically, modern illustration as well as the Bauhaus, Le Corbusier. I like building things, developing objects that are elegant, clean, concise. I learned a lot from a host of great modern architects: Oscar Niemeyer, Alvar Aalto, Mies van der Rohe, Marcel Breuer and Walter Gropius.

When did you begin tackling electronics?
Since an early age I loved discovering how things work, tearing apart my toys from the inside out like many kids do. During high school I enrolled in a technical course in electricity and electronics where I learned about valves, vacuum tubes, motors and semiconductors but the Fleming valve was so romantic with its hot cathode filament burning inside it… It was fun dismantling record players, telegraphs, radio transmitters but I abandoned electronics for drawing since it came easier for me due to my background in architecture.

And when did you finally embrace art?
In 1978, I participated in a contest called the “Objeto Inusitado” (odd object) organized by the MIS [Museum of Image and Sound] and won. During college I used to make objects that I didn’t know what they were actually for. I was unaware of the jokes you can play in art, its cultural potential and the tradition that came from the Dada movement. The only thing I did was put together fourteen objects I had already made for awhile: wacky lamps, funny carts, some experiences with electricity and curious pieces. To my surprise those odd objects won a contest, were reviewed by an art critic, came out in magazines and were sold. The art critic was Olivio Tavares de Araujo who was very generous in writing for Veja [Brazil’s equivalent of Time magazine]; I was pleasantly surprised. It opened many doors and comforted my family…

Because it proved you weren’t just another “Professor Pardal”[Gyro Gearloose]…
(Laughs)  It was great seeing that all that incidental work had cultural value. The next year, I did the Eletro-Performance at underground nightclub Radar Tanta. It was an amazing experience, remember?

It was totally unexpected, weird, lots of fun…
In 1984, I repeated the act at Funarte [government-funded foundation for the arts] and Sheila Leirner, who was the curator of the 1985 São Paulo Biennale, was there and invited me to show the performance at the 18th Biennale and also gave me a room for my objects.

How about your first Biennale experience?
At first, my mind went blank but fortunately it turned out to be very interesting. I was given a large, boxy 100 square meters with a six-meter ceiling height where I placed twelve objects and had a good visitation. The following year, curator Carlos Moreno invited me to participate at “Trama do Gosto,” a large exhibit also at the Biennale compound, also produced by the São Paulo Biennale Foundation. The aim was to explore the city in a playful way. I was asked a to do a home-appliances store since I was getting to be known in the field of objects made from household objects. At the time, I was performing with a vacuum cleaner and had this insight of designing a room for a red carpet occasion.

It looked like magic!
It really did. I had twenty-six vacuum cleaners in upward position in two perfect rows thirteen each, with a red carpet paving the way and inverted their air suction to pump air to the exterior, turned them on and placed a white styrofoam ball on the air exit of each hose. The light styrofoam balls twitched excitedly loose in the air. It was stunning! “Eletro-Esfero-Espaço” was a huge success and that’s how I became someone in art and that’s why my motto is: Art is Energy!

Some videos of installations and performances by the artist are embedded below.

“18,” performance by Guto Lacaz with rowing catamaran, on January 25, 2016 for the 462nd anniversary of the city of São Paulo at the Ibirapuera Park lake