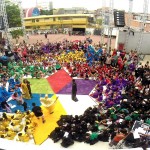 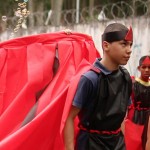 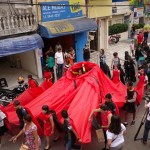 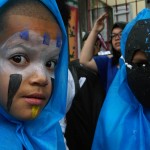 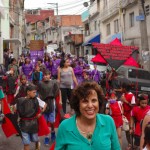 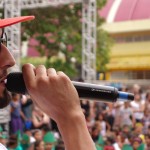 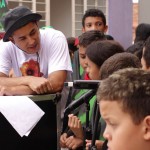 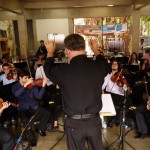 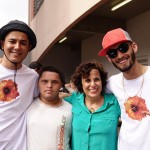 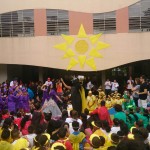 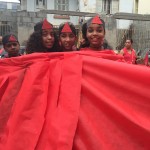 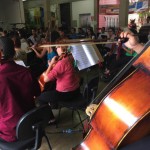 On November 14 in Heliopolis, São Paulo, the large-scale art education event created by artist Denise Milan brought a cast of thousands to the streets for a celebration. Milan sent us these photos, as well as the following text, which was composed by Naomi Moniz at the behest of the artist.

In 2014, Avante o Coletivo, a leading hip-hop crew from Brazil, fronted by vocalists U-China, Jota-Be and Tó, went on a goodwill tour of Europe and the USA with a goal to change the clichéd image of Brazil “of carnival, soccer, war in the favelas, sexy women and cursing words” and show that the favela is a place where one can find, as U-China raps, “culture, incentives, public participation, human warmth of the humble inhabitants, and everything I see unfortunately it’s not enough.”

On November 14 2015, under heavy rainy skies in Heliopolis, one of the biggest favelas in metropolitan São Paulo, we saw the sixth edition of ENGAGE THE EARTH—an art education project by the multimedia artist Denise Milan. It’s a four-month-long after-school program that closes with a spectacle of art, music, performance, hip-hop and opera being enacted by 1,200 children, their teachers and community leaders streaming through the streets parading towards the community center for the main event: a plaza staged for an opera and hip-hop with a youth orchestra of seventy adolescents with music from the “Opera of the Stones” with an arrangement made specially for this performance.

It was an avant-garde event in the tradition of a “happening,” a mobile opera through the narrow streets with a moving audience and the external world rushing in: busses, cars, bicycles, the hectoring of a lone evangelical preacher, pedestrians, dogs, people in the balconies looking at the timeless fable of a heroine in search of her illuminating half—going through darkness, Hades and finding light, reminiscent of the travails of Orpheus and Eurydice or Tamino and Pamina in the “Magic Flute.” It was a street celebration of words, music and images in the bumpy and curvy topography going uphill that reminds one of the vanguard tradition of John Cage and Allan Kaprow. Community leaders and children aged six-to-thirteen years played different characters of the opera, reenacting fear, loss, chaos, temptations, death with resolve, order, perseverance and triumph and the union of heroine with the numinous being as she acquires self-knowledge. At the end of the event a warm sun was shining above our heads and the happy and exhilarated participants “IN THE CITY OF THE SUN.”