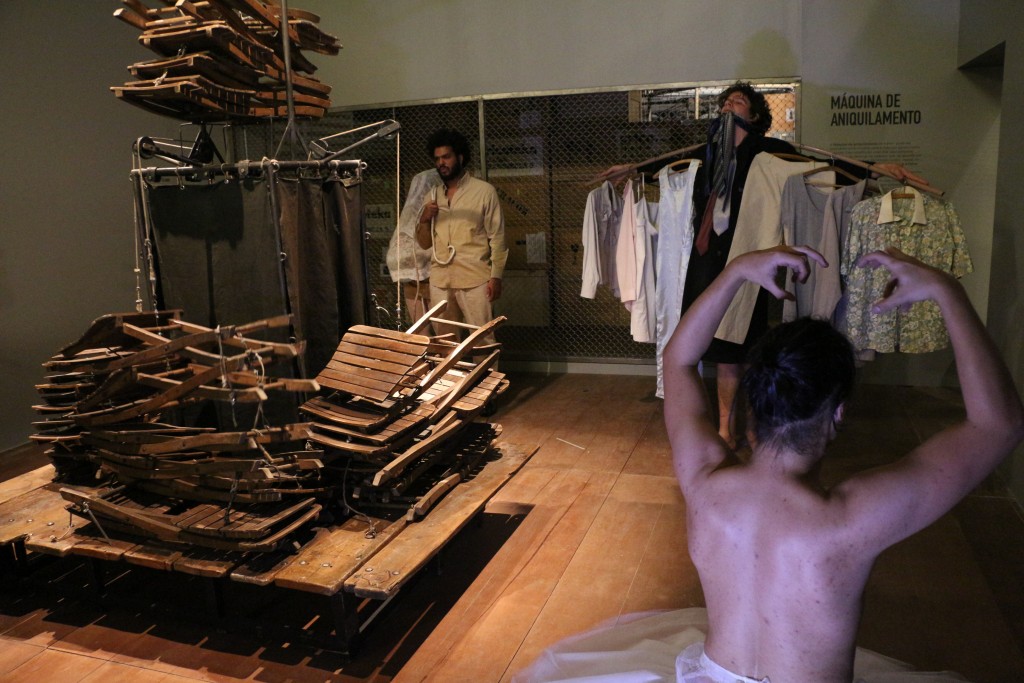 Prior to the sight, even before entering the building, there’s the sound. A mechanic yet monstrous noise made by Tadeusz Kantor’s “Annihilation Machine”: foldable wooden chairs arranged in a mechanism that make them bump against each other. The scenography for the play “The Madman and the Nun” (1963) was one of Kantor’s many devices to rearrange the viewer’s perception of the world. When the machine was turned on, the dialogues would become inaudible, and all possible meaning was lost. 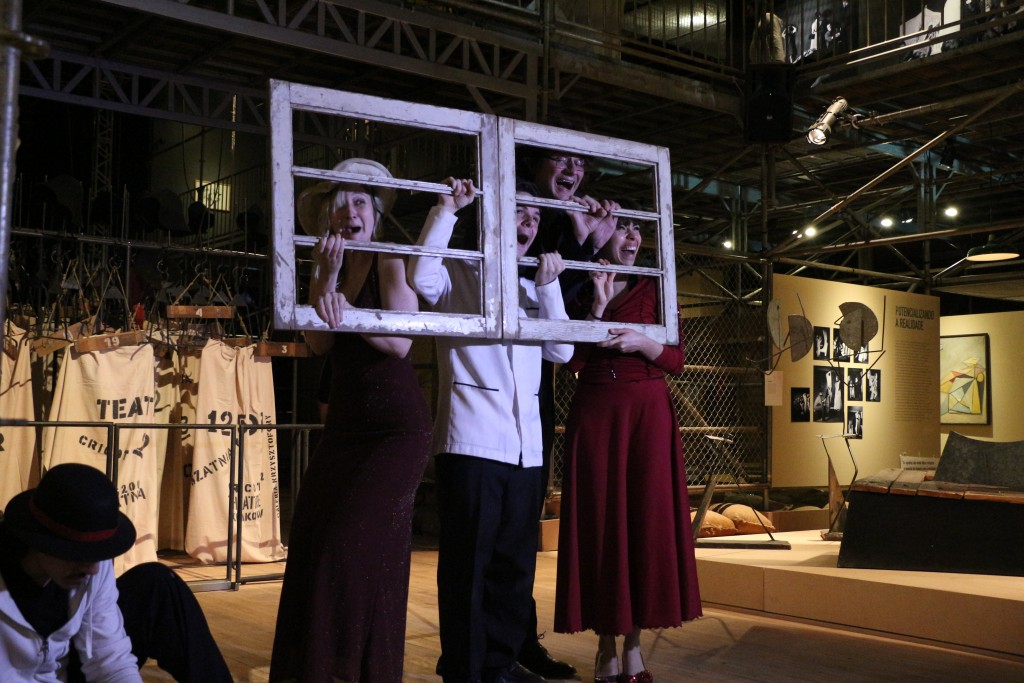 Experiencing the exhibition Máquina Tadeusz Kantor [“Tadeusz Kantor Machine”] is much like drifting in a maze. The show occupies almost 21,500 square feet, divided in two areas of the Sesc Consolação: the ground floor, where we find the aforementioned machine, documentary films, books, documentation and installations, and the Red Gym, which was transformed into a two-story set for the Polish artist’s dismal universe. Paintings, drawings, objects, projects, documentation of plays and happenings, original pieces of scenography, facsimiles and quotes are all placed side by side, in a space constantly activated by performers, that is also stage for a complementary program of theater plays and conferences.

Tadeusz Kantor began his career as a painter. It was in this context that he was first introduced to Brazil, in the 9th Bienal de São Paulo (1967), when he showed alongside names like Jasper Johns and Carlos Cruz-Diez. Despite the honor, he didn’t make much of a mark in the country’s culture back then. It was by his theatrical production that he became known in Brazil, especially for being a major influence on one of the most prominent figures of Brazilian drama, Antunes Filho. 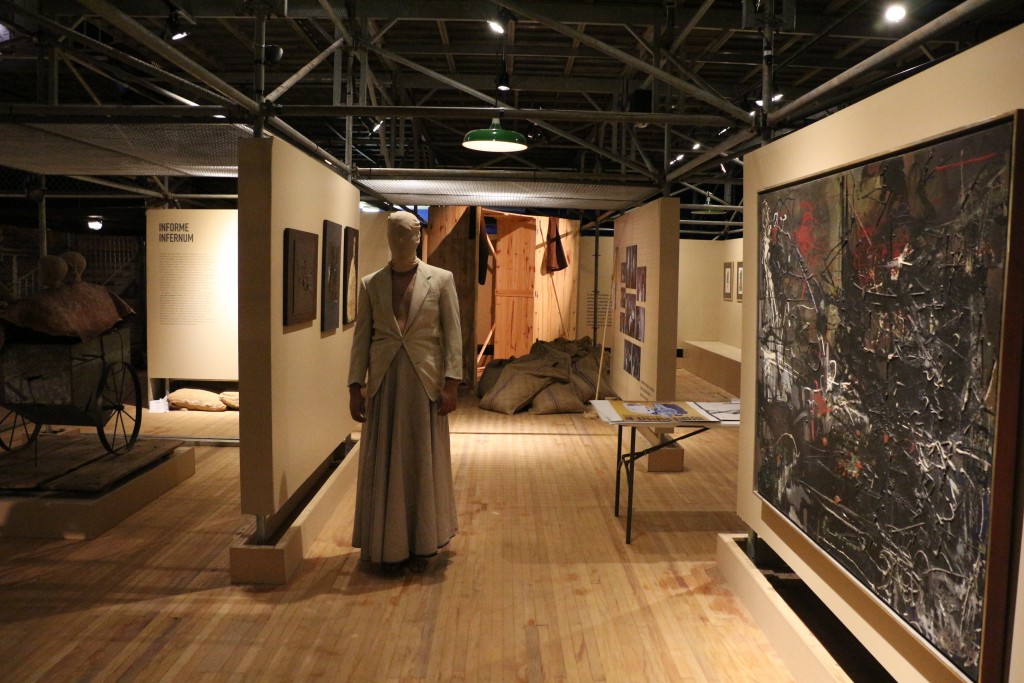 “Tadeusz Kantor Machine” rightly allows the public to get immersed in the whole of the artist’s complex universe, without privileging any particular language or media. In a different way than that conceived by Wagner, Kantor deployed the concept of Gesamtkunstwerk to create a multiple and intertwined body of work. His paintings can’t be fully appreciated without knowing his experimental production with Cricot2 Theatre, where plastic elements could be as relevant as the actors. In a typical avant-garde ethos, which he maintained to the end of his life, Kantor not only eroded frontiers between singular artistic manifestations, but also between art and life. By creating an immersive experience that doesn’t take in account traditional division between languages and media, the curators honored Kantor’s production, respecting the fact that in a complex system we cannot apprehend its parts without understanding the whole.

Curated by Poland’s Jaros?aw Suchan (Muzeum Sztuki’s director) and Brazilians Ricardo Muniz Fernandes and Sebastião Milaré, the exhibition celebrates the one-hundredth anniversary of Kantor’s birth (he died in 1990) and announces the year of Poland in Brazil, to take place in 2016. 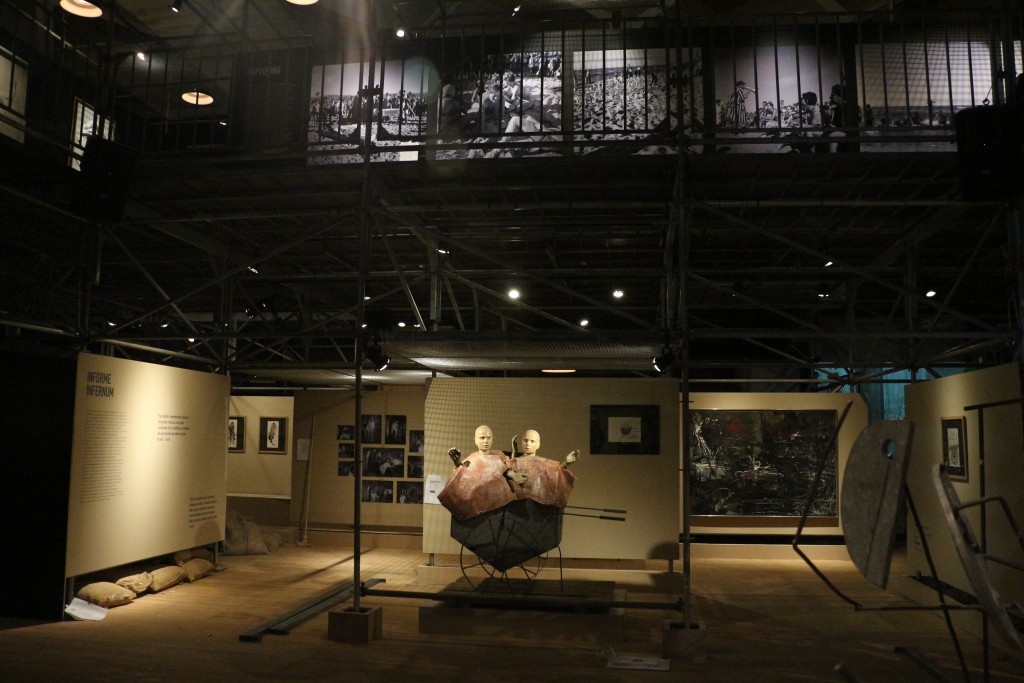