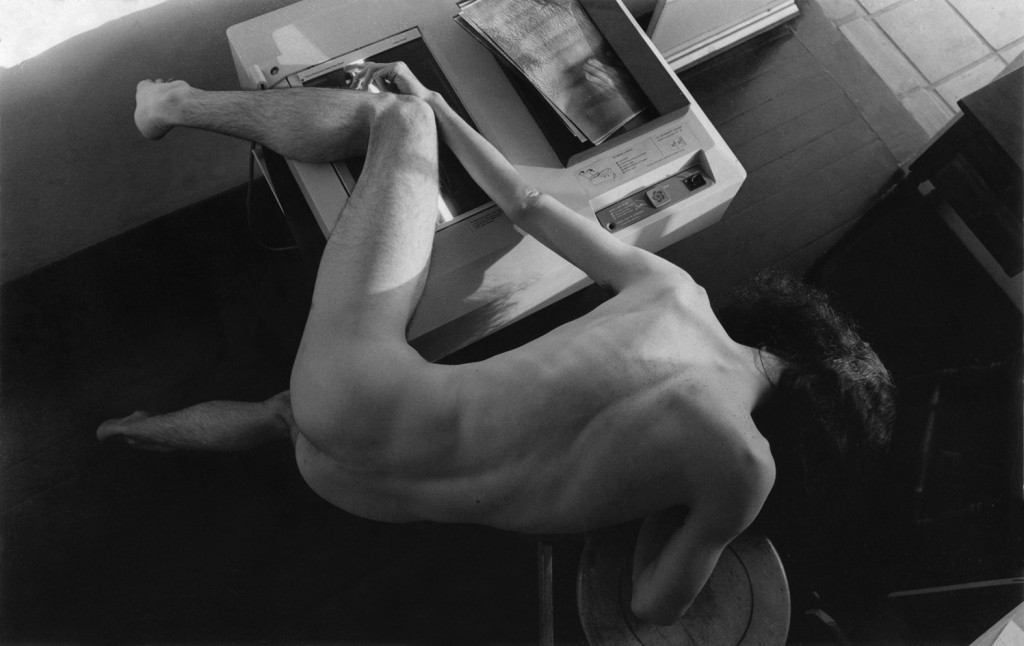 “Be careful not to bump your head on your way into the Glory Hole,” says Jaqueline Martins, who runs São Paulo’s smallest exhibition space within her eponymous gallery in the Vila Madalena neighborhood. Through a half-opened white hatch door under the stairwell is a warm glow of alternating blue and green light. Despite Martins’ advice, I do indeed bump my head climbing into the hole. I shut the hatch door and crouch on a hard floor in a one-meter-square space. There, onscreen, are naked men with erections racing among flashing laser lights, and a droning voice says, “I would rather be bitten by a snake or eaten by a jaguar than feel prejudice or abuse of power.” It is a new video by Recife-based artist Christiano Lenhardt, titled “Meu Mundo Jegue (My Donkey World).”

Martins opened the Glory Hole in February of this year not only to use all of the available space in her gallery, but also to rethink how art is shown and viewed. “The idea was to provoke people with expositions in a space that is not exposition-able,” says Martins, who shows primarily video and sound art in the underground space.

Upstairs, Martins’ gallery has a program dedicated to promoting marginalized art produced during the military dictatorship of the 1970s and 1980s. This was a period of intellectual resistance that, according to Martins, saw courageous artists seeking to transform, but it has been extensively neglected by critics and collectors ever since. The gallery complements the historic work with contemporary art dedicated to social and political change.

On view in the main gallery is a rarely seen collection by electronic art pioneer Hudinilson Jr who, in the late 1970s, produced the largest quantity of Xerox-based art in Brazil, says Martins. Paraphrasing the artist, Martins says, “’the body is my support, the object of my studies, it’s the body that interests me,’ so his work was developed entirely and obsessively around the body. Building on this subject he developed legendary performances where he did things like have sex with a Xerox machine.”

In the current Brazilian political context, with its most conservative congress since the military dictatorship with fascist and evangelical Christian caucuses introducing more and more hate legislation, a strong intellectual resistance that is committed to art and committed to pushing aesthetic and social boundaries is as important as ever.