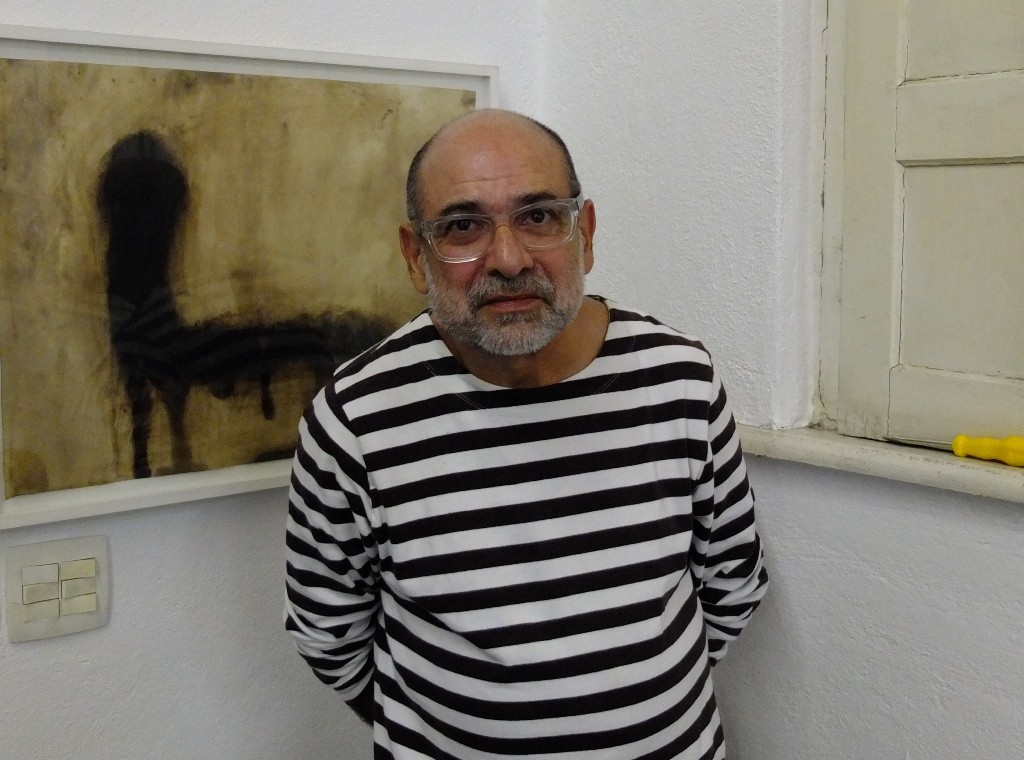 Naves with an artwork by Germana Monte-Mór

Rodrigo Naves is one of Brazil’s foremost art critics, and author of more than a dozen books on Brazilian artists. I met with him last week in his office, which doubles as a classroom, in a one-hundred-year-old house in the old-money neighborhood of Higienopolis, São Paulo. Surrounded by artwork by some of the most important Brazilian painters of the past fifty years, Naves expounded on the state of São Paulo’s scene, past and present.

“The Brazilian art scene was extremely amateur before the 1980s,” he says, but then: “A boom.” Naves says the developing international reputations of Brazilian artists like Adriana Verejão, Ernesto Neto, Vik Muniz and others were important steps “because we are still reasonably colonized by the North,” he says. “If something is successful in England or the U.S., we think it’s important.”

I asked Naves to explain the differences among the scenes in Rio and São Paulo, and he said, “The stereotypes are that in Rio you have fun and in São Paulo you work. São Paulo has the money and Rio has the sensuality. During the 1950s these stereotypes spilled into the break between Concretism and Neo-Concretism”—Brazil’s major twentieth-century abstract art movements. “It’s a little complicated,” he said, “but schematically speaking, Concretism had a more impersonal and objective style. It was tied to industrialization, came along with Bossa Nova and was based in São Paulo. In Rio, Neo-Concretism attempted to take advantage of the recent urbanization with a considerable understanding of what was happening internationally in the art world. There were important exhibitions in both cities, but the two styles represented a break between the cities.”

“Today, there is no comparison between the art markets in the two cities,” says Naves. “The money and the market are concentrated in São Paulo, but there are also things going on in Rio and in Brasilia.”

I asked him what he thought of the current international attention on São Paulo’s graffiti artists, and he appeared to favor a more familiar formalist approach to populist street art, which he seems to dismiss as being less than serious.

“There is a kind of ambiguity there because in principle it’s supposed to be street art but they very easily make money off if it,” he said. “Os Gemeos, for example, paint over wood and it gets hung in some millionaire’s house. So it’s not public art in the sense of, for example, Banksy. It’s something that is quickly commercialized. And, from the aesthetic standpoint, I think it’s childish. On the other hand, it’s indisputable that they have gained attention worldwide. But I don’t think attention is synonymous with quality.”

I asked him if he could recommend a few São Paulo artists who aren’t getting enough attention. He said, “Nuno Ramos works with diverse mediums. His production is difficult to categorize because one moment it’s a painting, then he does an installation or music, but it’s strong. There is a painter called Cassio Michalany, who reminds me of the North American painter Brice Marden. He is a guy who doesn’t kiss up to the critics and doesn’t have a very good situation in the market, but I think he is one of the best painters in Brazil. I can’t forget one of my favorite sculptors, Nelson Felix, and there are many other younger artists like Estela Sokol. São Paulo has become one of the world’s largest art marketplaces. Its GDP is now as big as Paris’, and a lot of good things are happening.”

With this, he excused himself; it was time to travel to his country home in Cássia dos Coqueiros. I was left with my notes in an empty classroom.